Polar Bear Attacks on the Rise 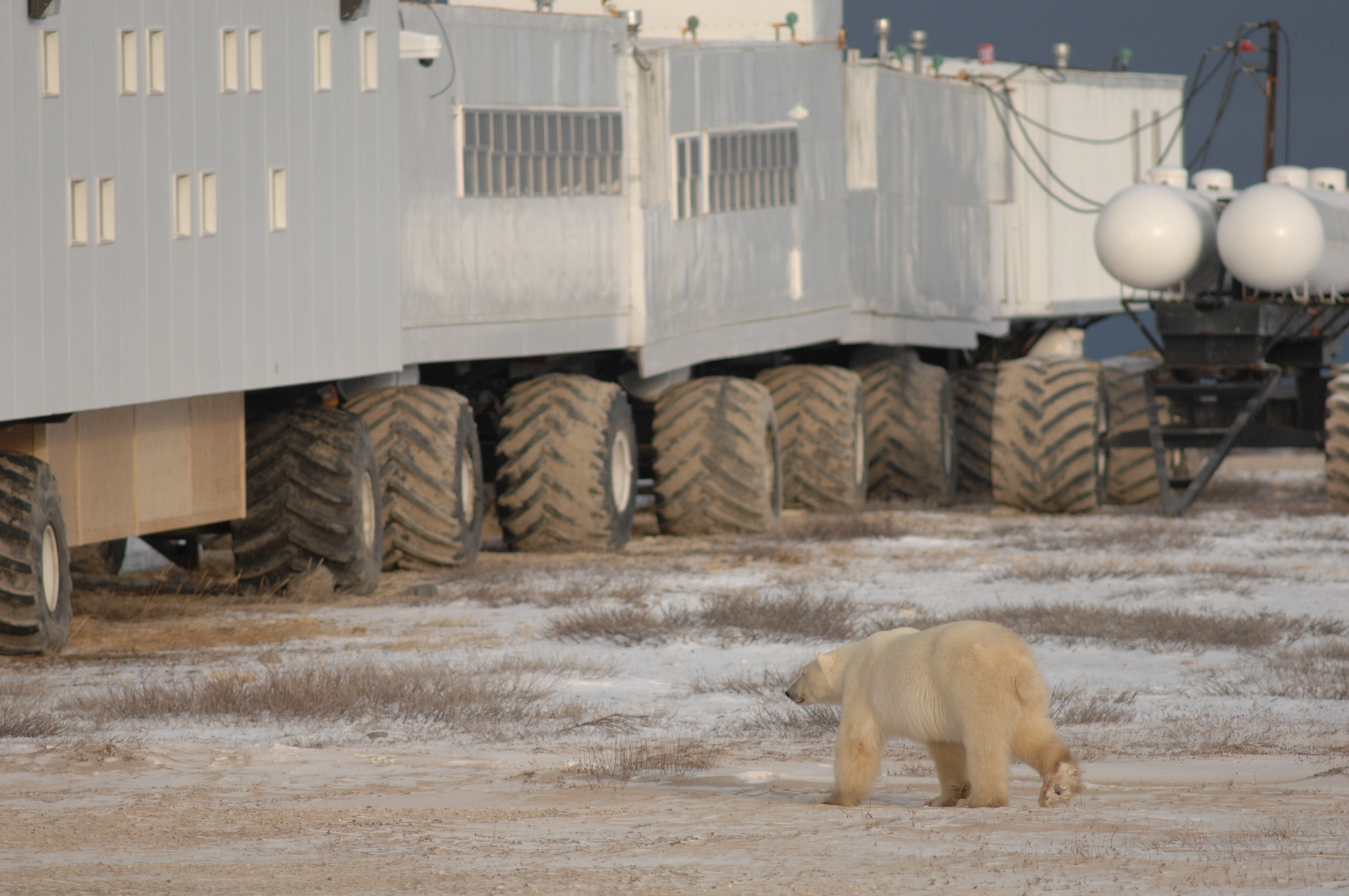 As the Hudson Bay freezes over later in the year, polar bears are coming in contact with humans more and more (photo: Andrew Derocher)

Churchill, Manitoba is the polar bear capital of the world, but as polar bear expert Andrew Derocher tells host Steve Curwood, melting ice due to climate change is creating increased conflict between bears and the town’s human population.

CURWOOD: It's Living on Earth, I'm Steve Curwood. Life for the famous polar bears of Churchill, Manitoba, can be a mix of feast and famine. When there's ice, the bears fatten up by catching ring seals that pop up to breathe in holes in the ice. But when summer melts the ice out of Hudson Bay, the seals are too fast to catch and the bears mostly go hungry. And with ice taking longer to come back , these southernmost white bears are going hungry well into the fall, and a couple of recent attacks on people have experts concerned. Andrew Derocher is a Professor of Polar Bear biology at the University of Alberta, and he says the attacks have caught people off guard. 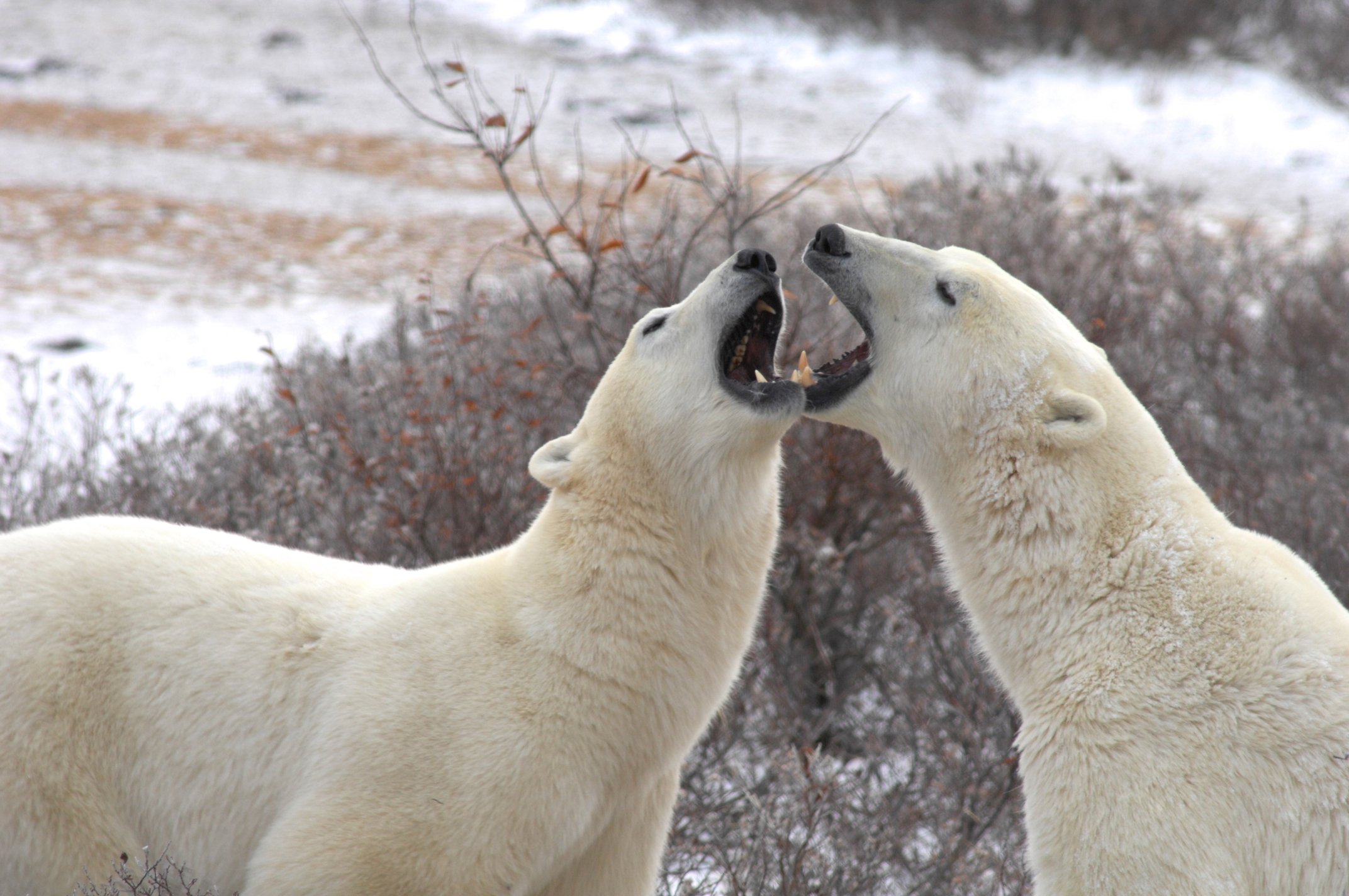 DEROCHER: It's an unusual event, we have to really go back several decades before we’ve actually had a fatality in Churchill. Fortunately, both cases that have happened this year, nobody’s been killed. It is unusal though to have people attacked in the town of Churchill itself.

CURWOOD: Well, describe these attacks for us. How many victims did you say? Three?

DEROCHER: We’ve had three people injured, two separate events. The first one was an individual out late at night on his own and he was attacked right in front of the bakery. This is the famous cell phone case where he pulled out his cell phone and I guess the flash sort of startled the bear, and it backed up, bumped into a planter and kind of ran away. Well, that bear is now in a zoo in Winnepeg, Manitoba, so that one wasn’t shot. 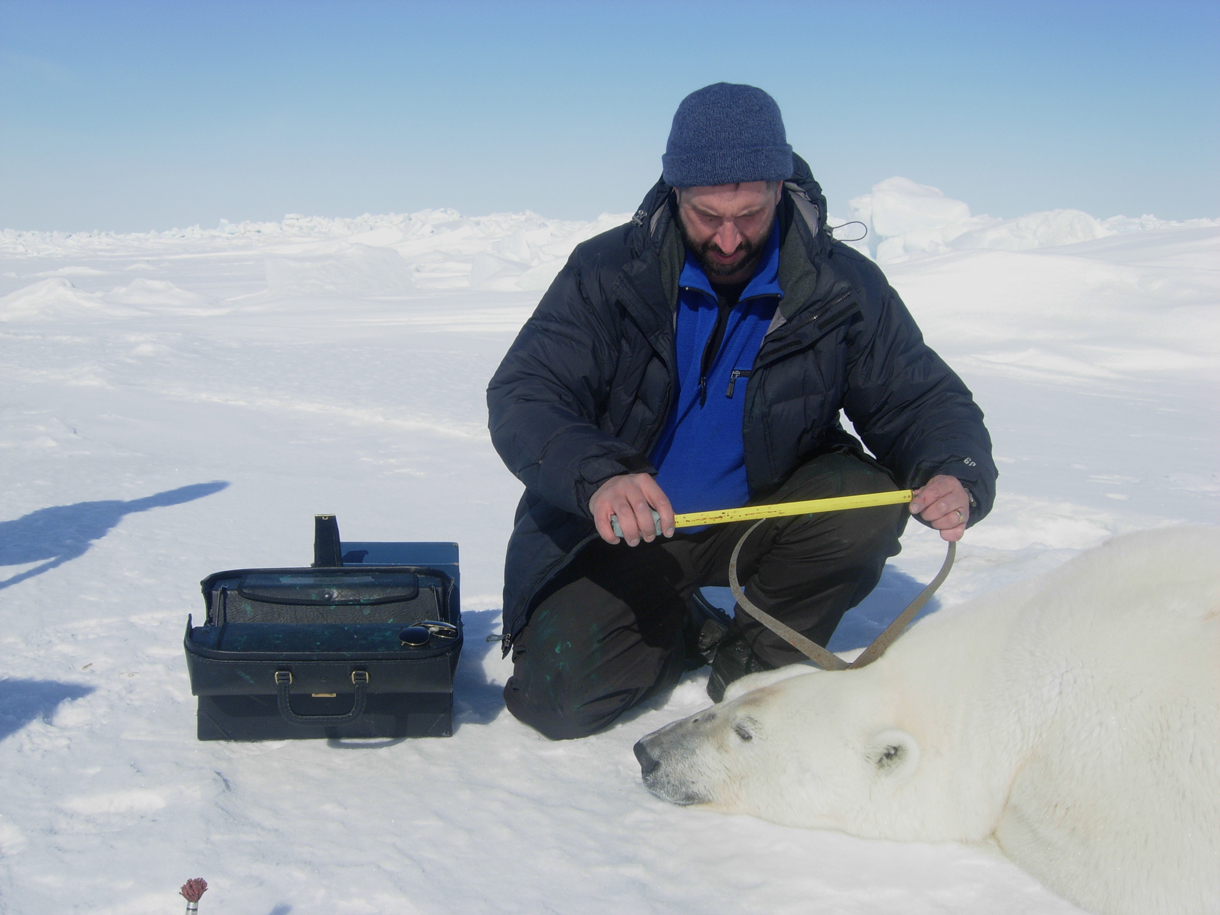 A polar bear viewing vehicle. Tourists flock to Churchill every year to catch a glimpse of the endangered polar bear. (photo: Andrew Derocher)

The most recent event that occurred was a little more serious, and there was a woman being attacked and another person came out to assist, and then he was attacked by this bear, and this seemed like quite an agressive situation and the information’s still a bit sketchy. It ended up that two bears were shot. It seems that there was a case of a bear being in the wrong place at the wrong time. That was a mother that actually had a cub with her. She was shot, and it looks like they did shoot a young male that was the bear responsible for the attack, and from all accounts that are going on right now, there are a lot of young skinny males around in the Churchill area this year, which is a bit unusual. Usually, we don’t see that many bears in town. 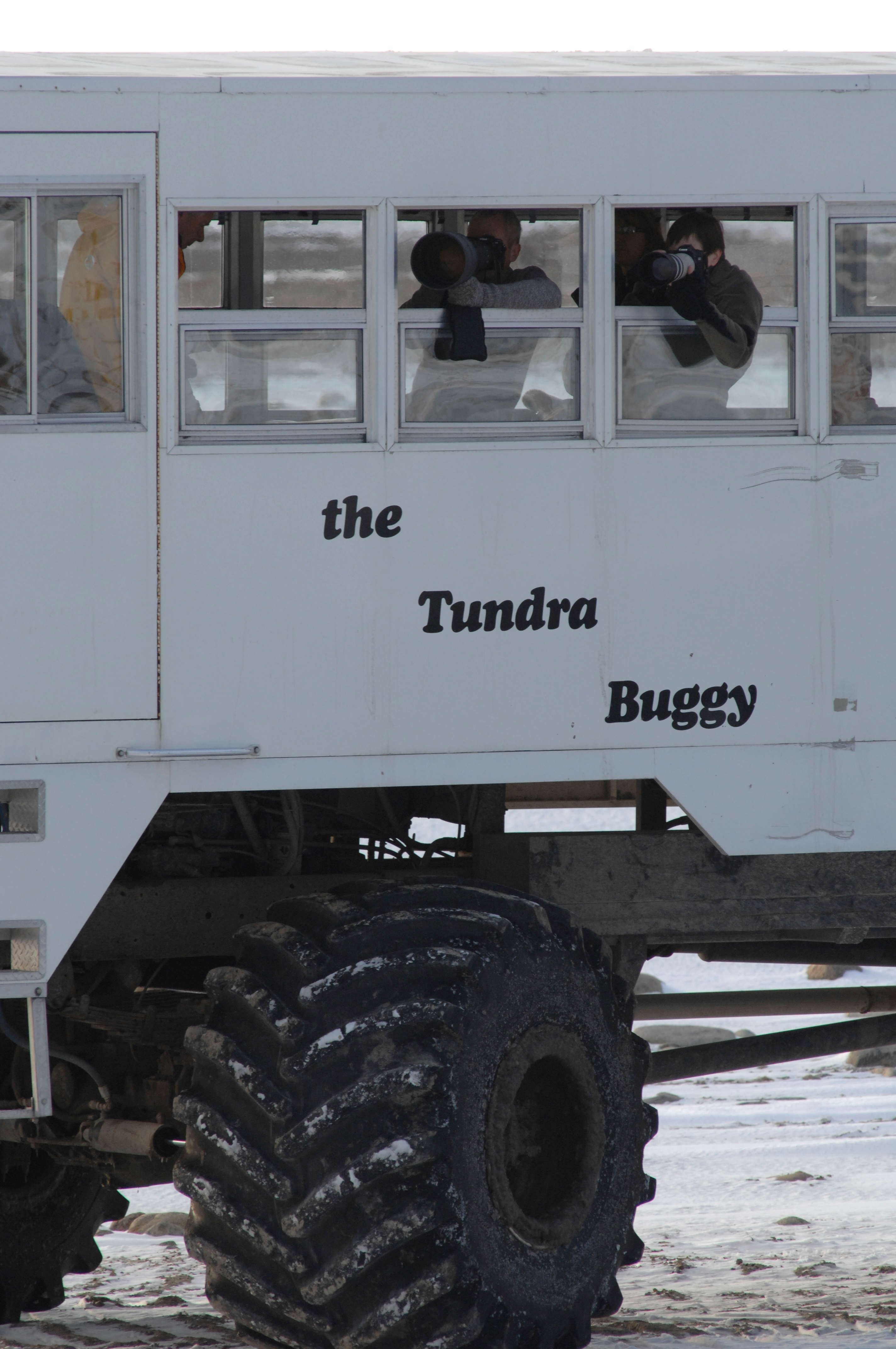 A bear coming in contact with people (photo: Andrew Derocher)

CURWOOD: Well, we saw this year Arctic ice retreat to, well, the sixth most extreme extent. That is, there have been worse years, but on the other hand, out of the last 30 or 40 years, this was the sixth worst one. How much does the lack of ice have to do with all this?

DEROCHER: Well, it’s an interesting challenge because when we talk about the worst ice years, those are typically measured in September, and that really affects bears further north more than it does directly in the Hudson Bay ecosystem because the Hudson Bay system has been ice free for as long as people have known in the summertime. The challenge of the Hudson Bay system is more that what’s happening is, the general climatic warming is causing an earlier melt in the springtime, and then a later freeze up in the Autumn. 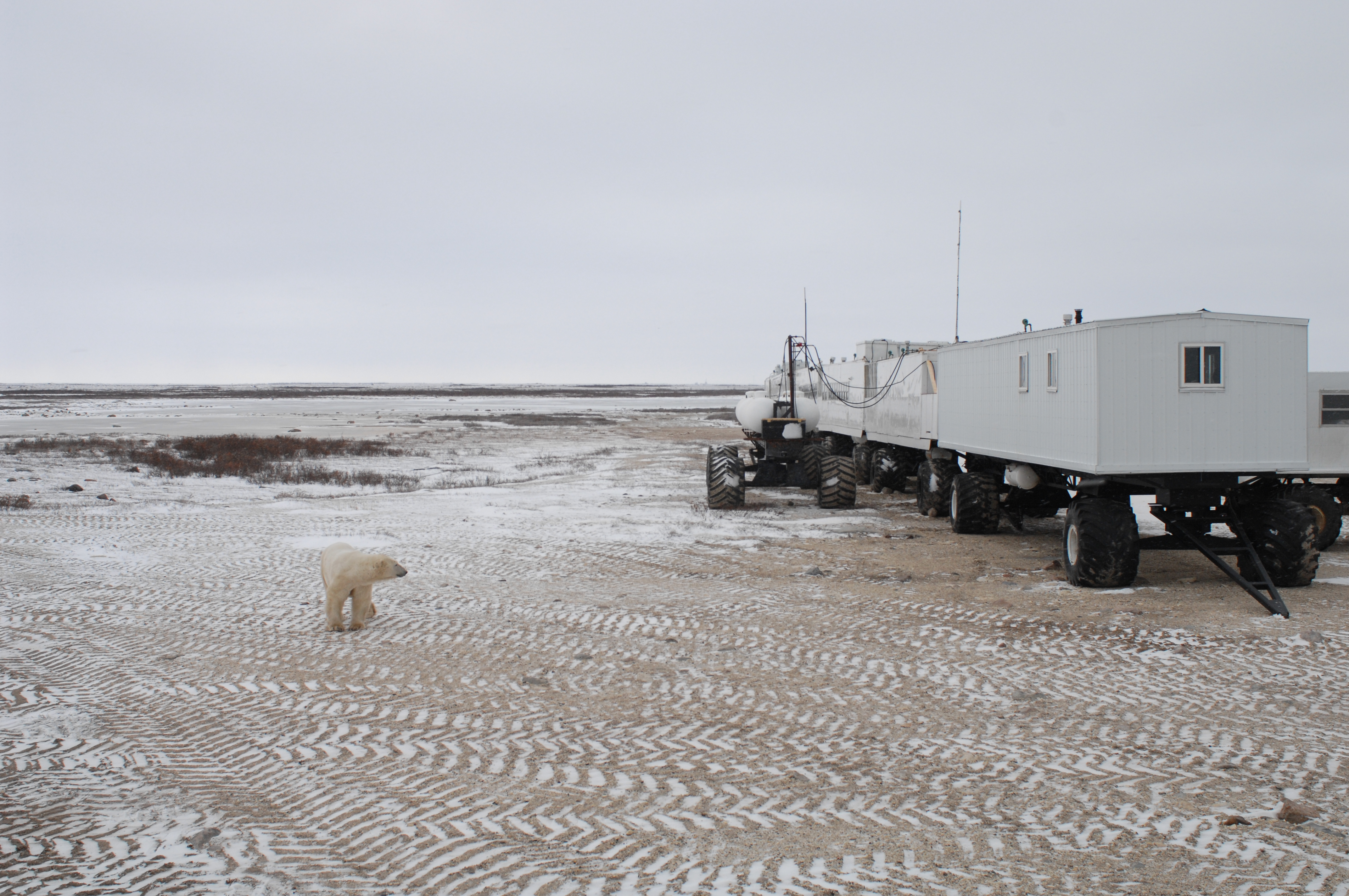 So the challenge here is that bears are being pushed. We’re now starting to cut into the feeding time in the spring out on the sea ice, and then we’re making them go longer and longer on shore without access to their food, so they can only bring so much fat ashore with them, and that’s the real problem here, is that these bears are running out of energy, and of course, it doesn’t matter where you live - if it’s grizzly bear country or black bear country - you know when there’s a food crop failure and the bears get hungry, they come around communities, and it’s the same process we’ve got in the Arctic with polar bears.

CURWOOD: So traditionally, how have humans and bears gotten along there in Churchill? You’ve been there for many, many decades. What’s it like? 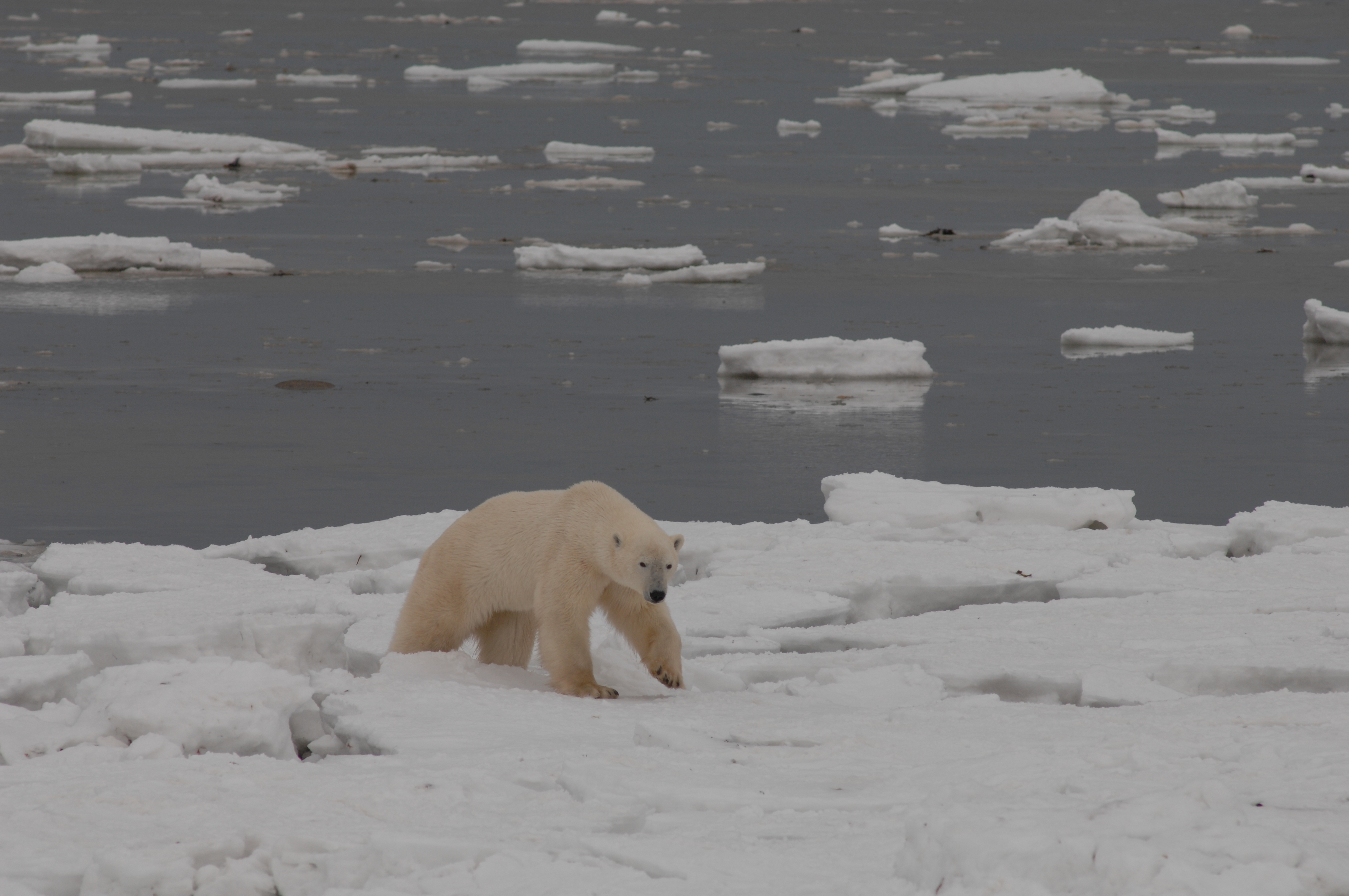 DEROCHER: It’s a pretty nice relationship. I mean, the polar bears come back and the tourists bring a lot of money with them when they come. There’s a bit of an uneasy sort of respect that goes on. There are people in Churchill that are pretty careful around polar bears for the most part. Probably, one of the big issues is that the polar bear alert program has been incredibly successful. The government of Manitoba puts amazing resources into keeping the bears away from town, but it’s not a foolproof system and some bears do get into town and what a lot of polar bear scientists and managers have been saying is that there’s a changing scenario going on and that the bears are not going to behave as they used to behave.

In the years past, when these bears were fat and sassy coming off the ice and in good shape late into the fall, they had no interest in being around people, and they were very wary of humans. Now, of course, that the bears are leaner, they’re starting to look for food resources, and we’re seeing this right across the Arctic, it’s not just in Churchill, it’s in other communities like Resolute in the Canadian Arctic, parts of Alaska as well. It’s everywhere.

CURWOOD: What does this mean for tourism in Churchill?

DEROCHER: Well, in the short term, the tourism industry is going to be quite vibrant. There’s no question there’s a bit of this attitude of last chance to see what’s going on, so if people want to see polar bears relatively inexpensively, Churchill is still by far the best place to go. I was talking to people there this morning. There’s lot of bears around, they seem to be doing quite well, but that population from all indications is on a pretty steady decline, and longer term, it’s not going to be there, so people who want to see bears are going to have to go further and further north over time.

CURWOOD: How long do you think that the tourism industry has for bears there in Churchill?

DEROCHER: Well, you know, that’s the challenge here, and one of the concerns we have is it would only take one very bad year, so a very early melt and a very late freeze up to see a major decline, and some of the energetics modeling that we’ve done on the bears suggest we could see easily a decline of 50 percent in a single year. By all accounts, it could be next year, it could be the year after, it could be ten years away. It’s really hard to predict. There’s a lot of noise in the Artic sea ice systems, and the bears respond directly to the sea ice.

CURWOOD: So professor, overall, how are polar bears faring throughout the world?

DEROCHER: Well, we’ve got 19 different populations in the circumpolar Arctic, and some of them are doing just fine. We’ve got recent inventory information from the population that’s north of Hudson Bay, an area called Fox Basin, it indicates that population is quite stable. Nonetheless, in that area, we’re seeing changes in sea ice, and we think that we’re on the cusp of changes in the next population north. But if you go to the other populations around the Arctic, some of them are going to be doing well for many decades to come, and some areas may actually see some improvement in habitat. We haven’t noted that anywhere yet, but it’s still conceivable to happen.

The concern is that climate change is going to mean differerent scenarios in all of these 19 populations, so the ones that are in serious trouble right now are the southern Beaufort Sea off Alaska, the western Hudson Bay is in dire straits right now, and we’ve got serious concerns about other ones, the Davis Strait population off of Labrador and New Finland, and so it just depends on where you look, but collectively it’s not good for the bears.

CURWOOD: Andrew Derocher is a Professor of Polar Bear Biology at the University of Alberta. Thank you so much, Andrew.

DEROCHER: It's been my pleasure. Thank you very much.