Patents to Rescue the Climate 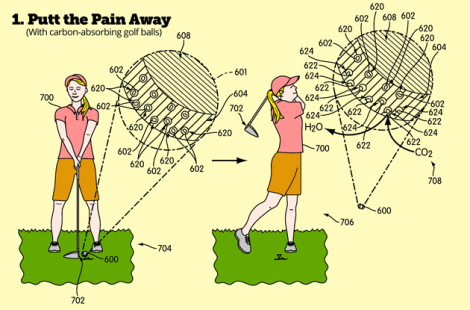 The mechanics of a golf ball that can suck up carbon with each swing. (Grist)

Across the US average citizens are coming up with innovative, sometimes wacky, inventions to combat climate change. James West, senior producer for Climate Desk, tells host Steve Curwood about a couple of unusual patents he found, including a carbon absorbing golf ball.

CURWOOD: Well, lights that think for you and anticipate your every move aren't the only clever inventions that might help with the problem of climate change. James West is Senior Producer for the online news collaboration Climate Desk.Taking a break from work one day, James started random internet searches and wound up at the US patent office website.

WEST: So call me a nerd or just call me bored, but actually I got into this black hole of internet trolling through patents, looking at the ways in which your fellow citizens have been inventing climate solutions - adaptation, mitigation solutions - in their backyard. And I found some very interesting things indeed. 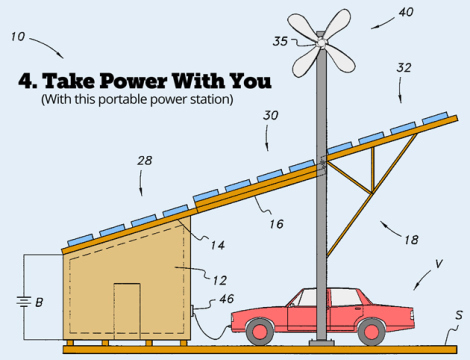 CURWOOD: So let’s talk about a couple of them. What about the patent for a better de-icer for car windows? How would that work?

WEST: Well, lok anybody that has been in cold climate knows how annoying it is when you’re tired, caffeine is barely rushing through your blood, and you have to de-ice, de-fog your car in the morning. So this guy called Jerry Lansinger, he now lives in Washington state, this guy has come up with a way to de-ice a windshield in less than a minute.

CURWOOD: How would this work?

WEST: This is a specially designed heat exchanger installed in the engine which rapidly converts the existant heat in the engine into hot water, and then it’s sprayed out into nozzles onto the windshield itself. And the inventor, Jerry Lansinger, said he’s recorded times of 45 seconds for a complete de-icing of your windshield. So that’s a lot less than the average 15 to 20 minutes in all, and it will get you on the road a lot earlier in the mornings, and also be better for the environment.

CURWOOD: Now there’s another patent that you looked at which is fake sea ice. How would this work?

WEST: Well, this one was really interesting. This guy called Phillip Langhorst from St. Louis has invented this ice substrate that he envisions someday to be dropped on the surface of oceans or lakes to reflect sunlight back into space, so this is a kind of geo-hacking or geo-engineering measure, and these things are going to be giant sheets of what he calls “artificial ice”. Now underneath though he also plans to sow nutrients so that sea life that grow on the bottom of these things that may then be able to be harvested for biofuels.

CURWOOD: What concerns were expressed in the patent about the possible side effects of covering the surface of the ocean with this fake ice? 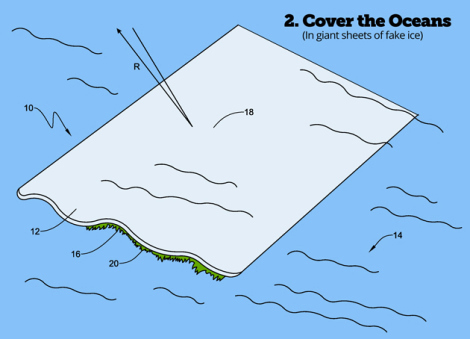 WEST: Phillip was like, well look, we’re talking about the deep future here where everything else has failed; we’ve failed to come to any international agreement on this and we need to do something drastic. He basically said, “Pick your poison. Either we get very warm and we can’t deal with it, or we have to invest in something like this.” So he was saying the possible side effects are you know putting this stuff onto a very lively ocean and killing stuff that’s already there, and the cost, obviously, of developing this stuff at such a scale that we overlay the oceans in the western Pacific with fake ice structures is obviously going to be prohibitive, and of course, the companies that he’s approached have already bought to this idea and said, “Um, not sure, Phillip, whether this is going to be a viable commercial option.”

CURWOOD: Now, there’s another idea that kind of looks cool. This is a collapsable, portable source of renewable energy. There’s a diagram with the article that shows the car hooked up directly to a windmill. What’s the idea here?

WEST: Yes. So this is the idea that if, and I’m particularly thinking in kind of emergency situations, post-Sandy, here in New York there was a desperate need to get portable power into places where the grid had failed. There’s an inventor in Crossville, Tenn. called Lynn Miller who’s come up with this idea of a portable power station. This is something you can put on the back of a trailer and literally unfold onto a flat surface, by the side of the road, or in a parking lot, and the idea is there’s a roof with an array of solar panels and this wind turbine that can be thrown up into the sky at a moment’s notice and it’s plug and play. This thing essentially unloads and generates power immediately.

CURWOOD: So, James, you actually talked to the people that wrote these patents, right?

WEST: I did. It was actually great connecting with these inventors because they’re so passionate about the things that they have invented, sometimes for many, many years. You know, Jerry Langsinger in Washington state, he’d been tinkering for 20 years in his garage to produce this new windshield, rapid defrosting system, and so you really get a sense of people’s passion about this which was really exciting.

CURWOOD: I understand though that there was one more patent writer that you couldn’t get through to - that’s Nike. Tell me about their new idea?

WEST: OK. Yes. So this is the one inventor that I wasn’t allowed to get through to. This is the carbon-sucking golf ball that the golf team at Nike has actually invented and patented through the US Patent Office.

WEST: Carbon-sucking golf balls! This is an actual patented invention by Nike if you can believe. it. You can’t make this stuff up.

CURWOOD: Well, how exactly would this thing work?

WEST: You know, I have to say, I was pretty impressed by the science of this. It’s a pretty technical whizbang type of thing. The outside of the golf ball deforms somewhat, this layer, and that sets up this chain reaction so that as it’s whizzing through the air, it’s sequestering carbon out of the atmosphere. At the end of 18 holes, you’re able to look at this ball, and see how much, through a some kind of visual indicator on the side of the ball, how much carbon you’ve been able to suck out of the atmosphere along the golf course, and the more swings, the more carbon that you’re going to suck of the atmosphere - so that would make me a major climate action hero at that point. But the patent does say that these golf balls at best will only ever deal with the amount of the carbon that’s required to produce them. I wouldn’t really bank on this replacing any kind of agreement being hammered out right now in Warsaw, for example, or future UN Climate agreements.

CURWOOD: James West is a Senior Producer for ClimateDesk. Thanks so much, James.