Gleaning is an ancient tradition. In the Torah and Old Testament farmers are instructed to leave some food in their fields for the poor to collect. Living on Earth’s Bobby Bascomb reports that modern volunteer gleaners can go to farmers’ fields at the end of the season to harvest the last of the bounty and then deliver the produce to food pantries for the food insecure.

CURWOOD: Much of North America is now settling into the cold, dark time of year. Thanksgiving celebrated the bounty of the harvest, and the farmers’ markets have just about all shut down. But that doesn’t always mean that farmer’s fields are empty - in fact, a lot of perfectly good food often remains. Now thanks to the age-old but newly popular custom of gleaning, some of the fresh food that would otherwise be wasted is getting to some of the people who need it most. Living on Earth’s Bobby Bascomb prepared this report, starting in a farm west of Boston.

CRAWFORD: Thanks guys for coming out today, we’re at Waltham Fields Community Farm. We are going to harvest some lettuce and maybe some collard greens as well. 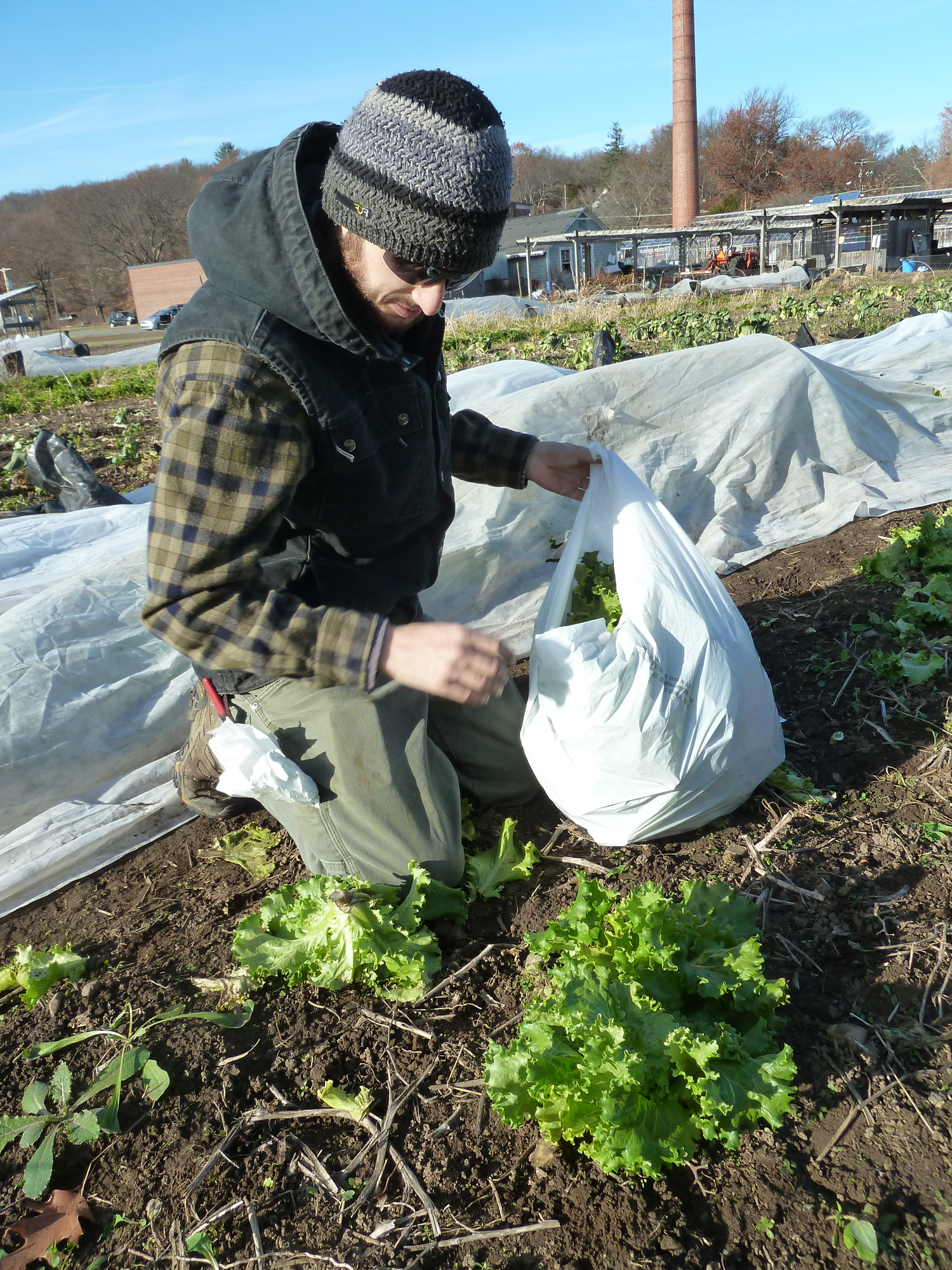 BASCOMB: Matt Crawford welcomes a group of five volunteers in the parking lot of a small farm, 10 miles west of Boston. They’ve come to glean - to collect the last of this year’s greens to donate to a food pantry produce that would otherwise go to waste.

BASCOMB: Matt leads the gleaners out to the long furrowed fields. Most of them are empty now, rows of soil waiting for the spring planting. But four rows at the end are covered in a long white gauzy sheet. 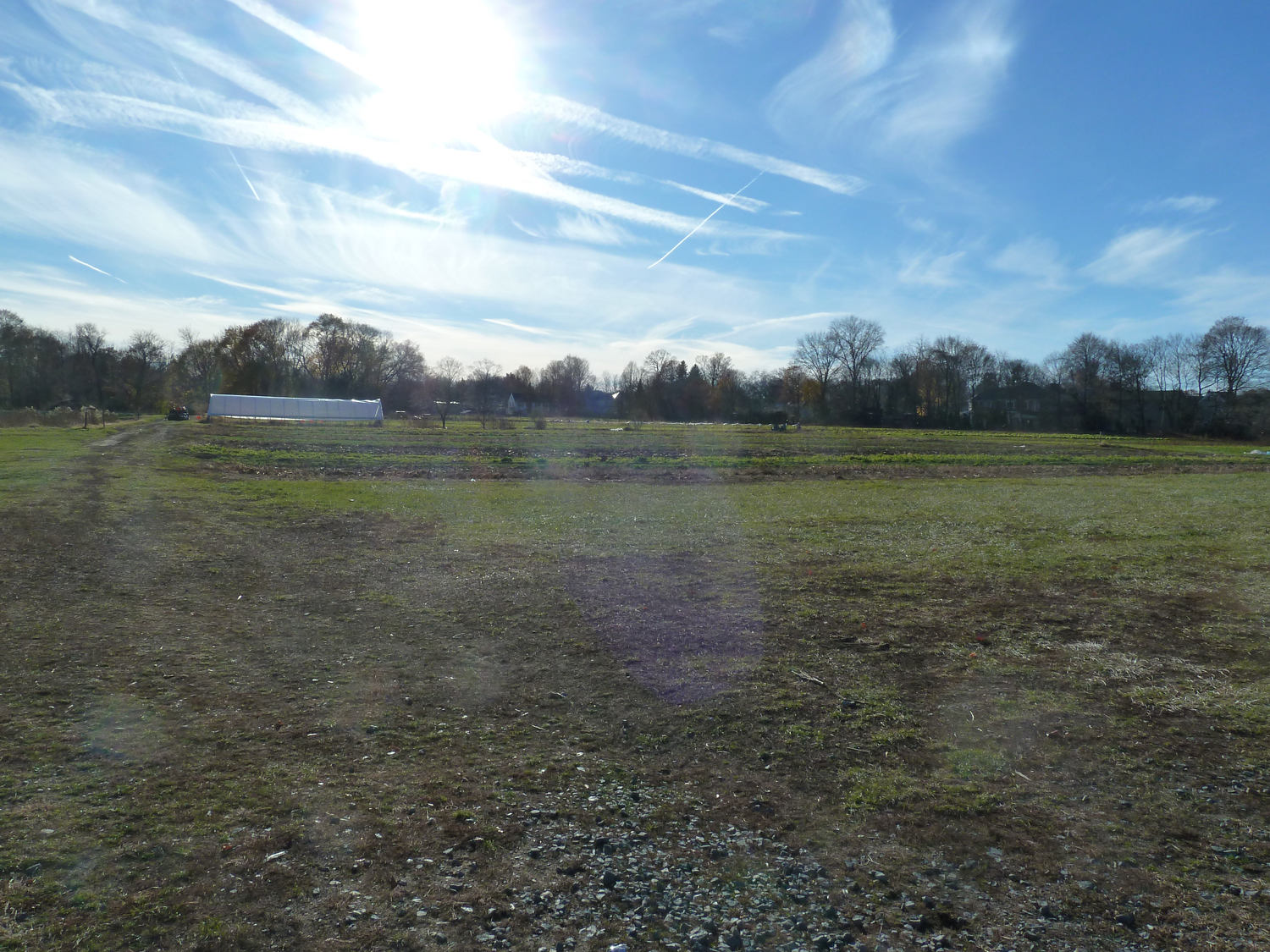 BASCOMB: Matt pulls back the fabric to reveal perfect heads of red and green leaf lettuce. In the summer they would easily fetch two or three dollars apiece at the farmers’ market.

CRAWFORD: I’m sure most of you have harvested lettuce before, but I’ll show you the best way to do it. Carefully grab it, pull it back, tilt away from ground, from the earth. Cut it right at the base so leave any roots in ground. Prune off any dirty or dead looking leaves, anything that’s yellow, and we’ll put it right in the bag. 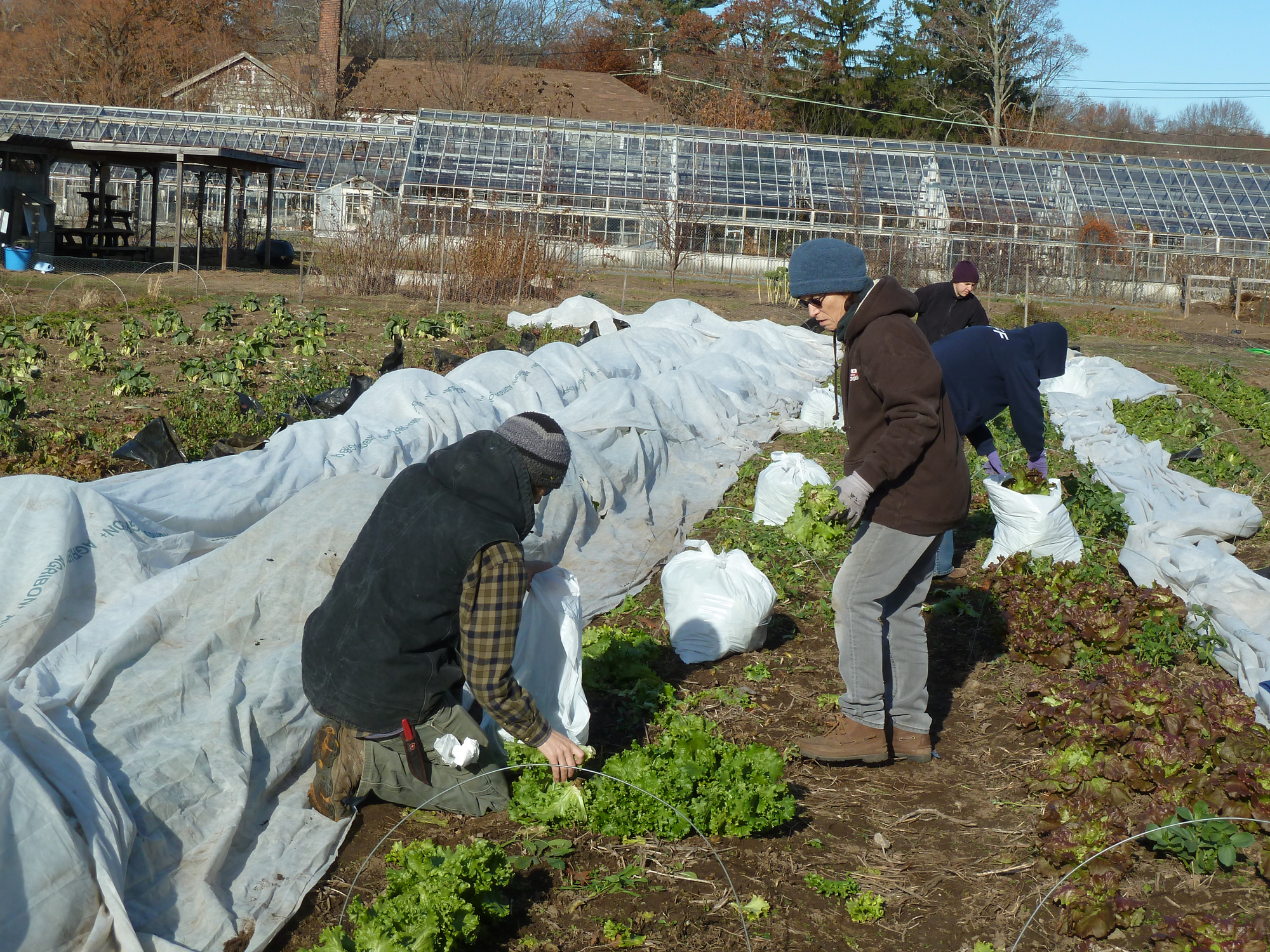 CRAWFORD: Just the lettuce, yeah. All this other stuff is weeds, which are actually edible but we’re not going to eat them.

BASCOMB: Volunteer Bruce Bell gets to work at the top of the row, crouching down to cut the lettuce with a small sharp knife.

BELL: This is a beautiful one, a few dead leaves, some dirt, but more or less a beautiful head of lettuce. I’m a gardener also and I wish I could do things as good as this. I’m out here to admire everything that’s so beautiful even at this late season. 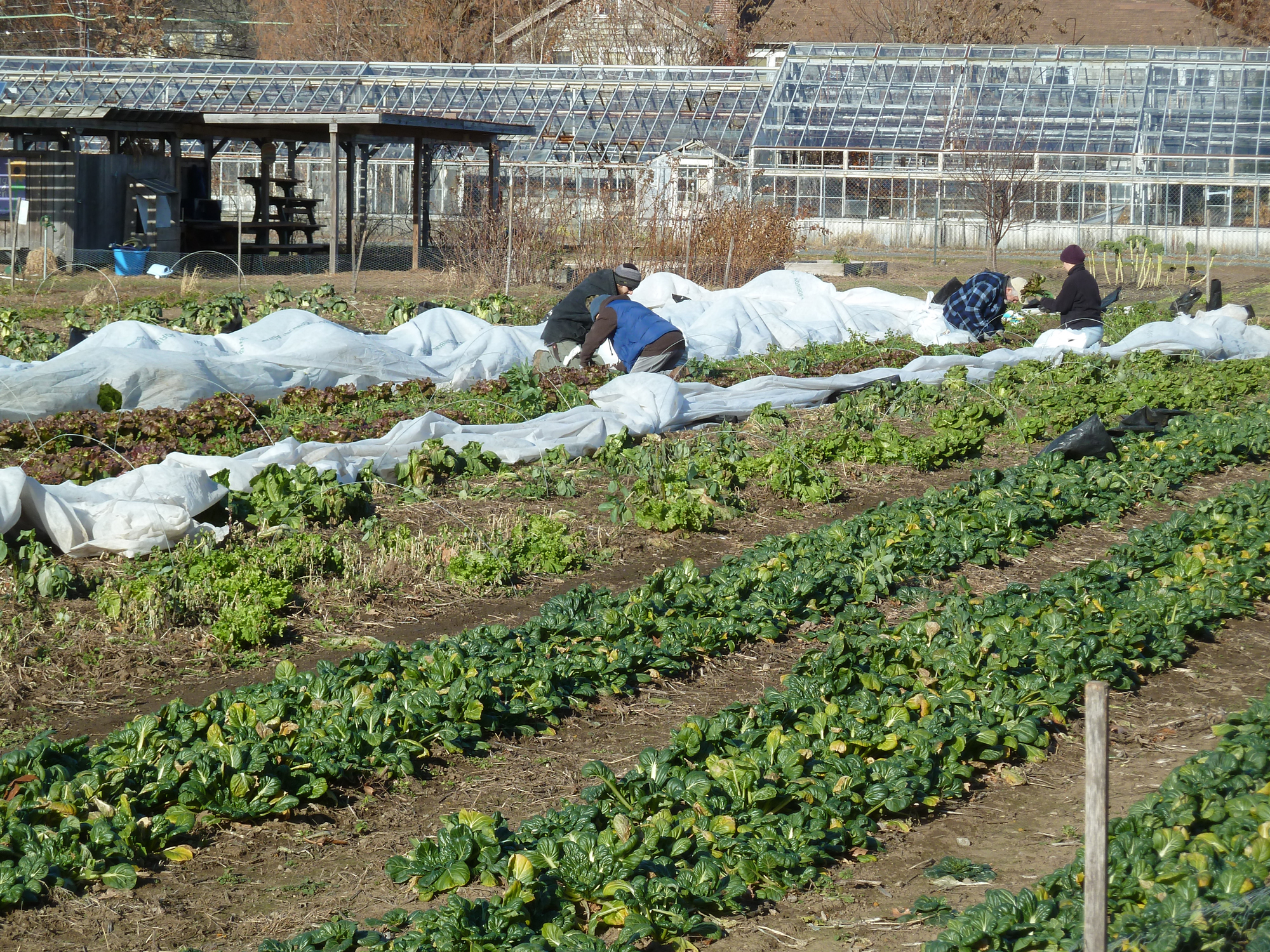 BELL: A few dead leaves here, brush them off and in we go.

BASCOMB (on tape): So, why do you do it? Why do you like coming out here? 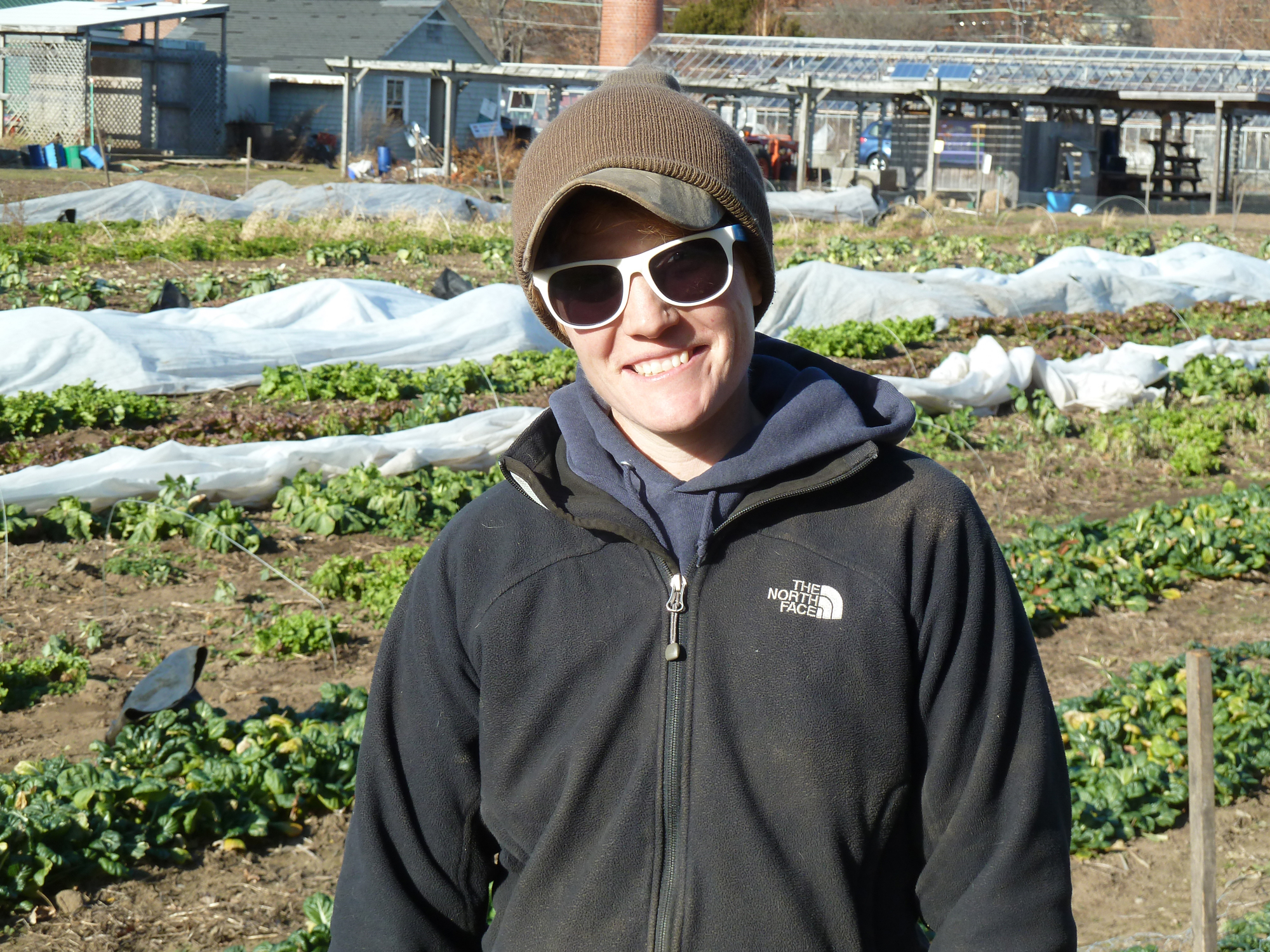 BELL: I like the exercise, I like the fresh air. I like the connection it makes to other people that everyone should eat as well as I do and I eat pretty well and this is one way to help that along. You can see how much, I wouldn’t call it waste, but so much in the food chain that could go to waste if we weren’t doing this.

PORTER: I think the farmers have big hearts and don’t want to see food go to waste.

BASCOMB: Zana Porter is one of the farmers at Waltham Fields Community Farm. Porter says by this time of year they no longer have a market for the produce left in the fields. 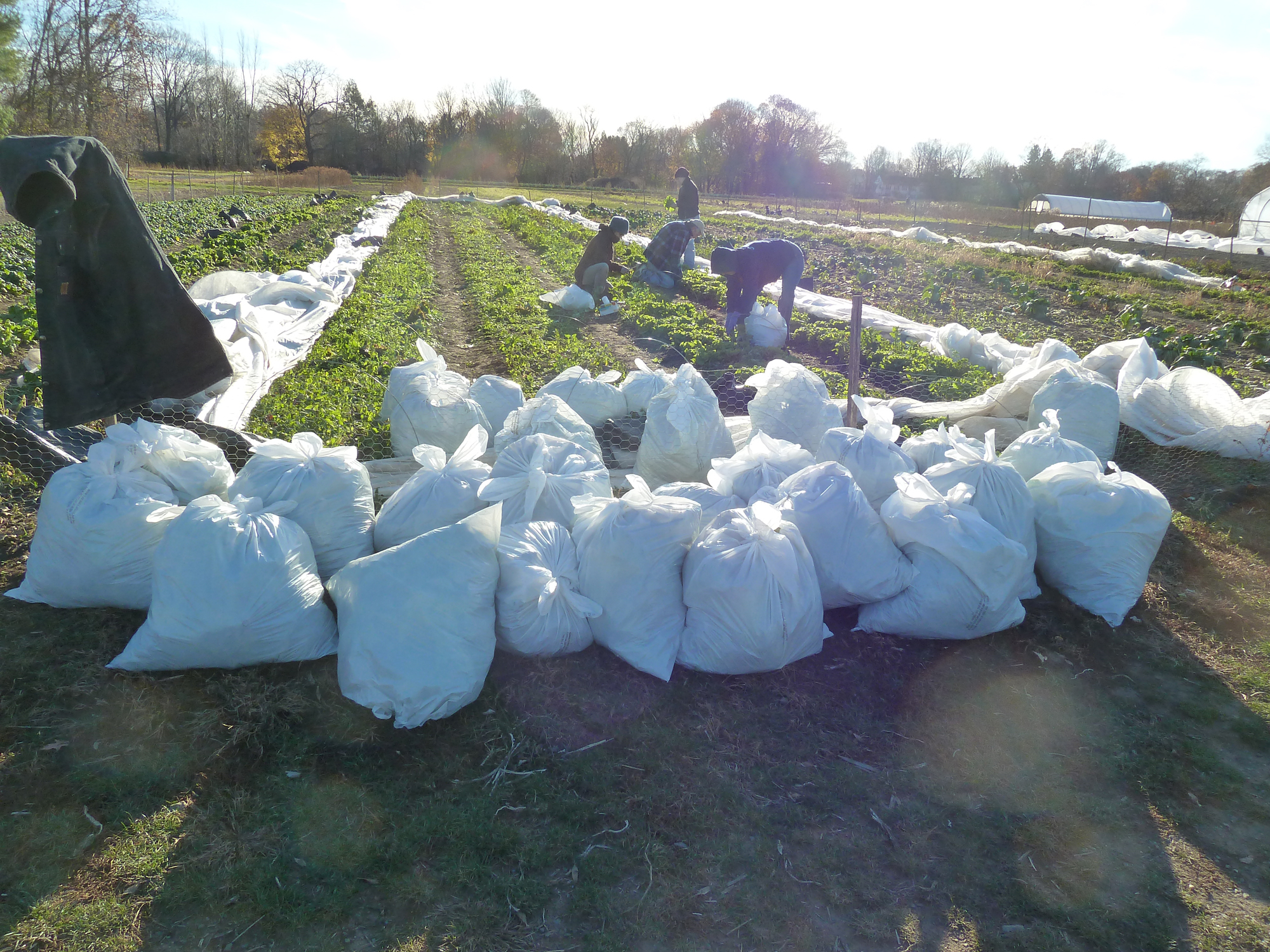 PORTER: At the end of the season we reach a point where our staff levels drop off, we’ve met the demands of our CSA and if it’s been a good season we still have food in the field that needs to go somewhere. So we call on the gleaners to come get the last of what’s out in the field so it doesn’t go to waste.

BASCOMB: This community farm is run as a non-profit and giving back to the community is part of their mission. But Porter says there are also practical reasons for getting as much as possible out of the fields. 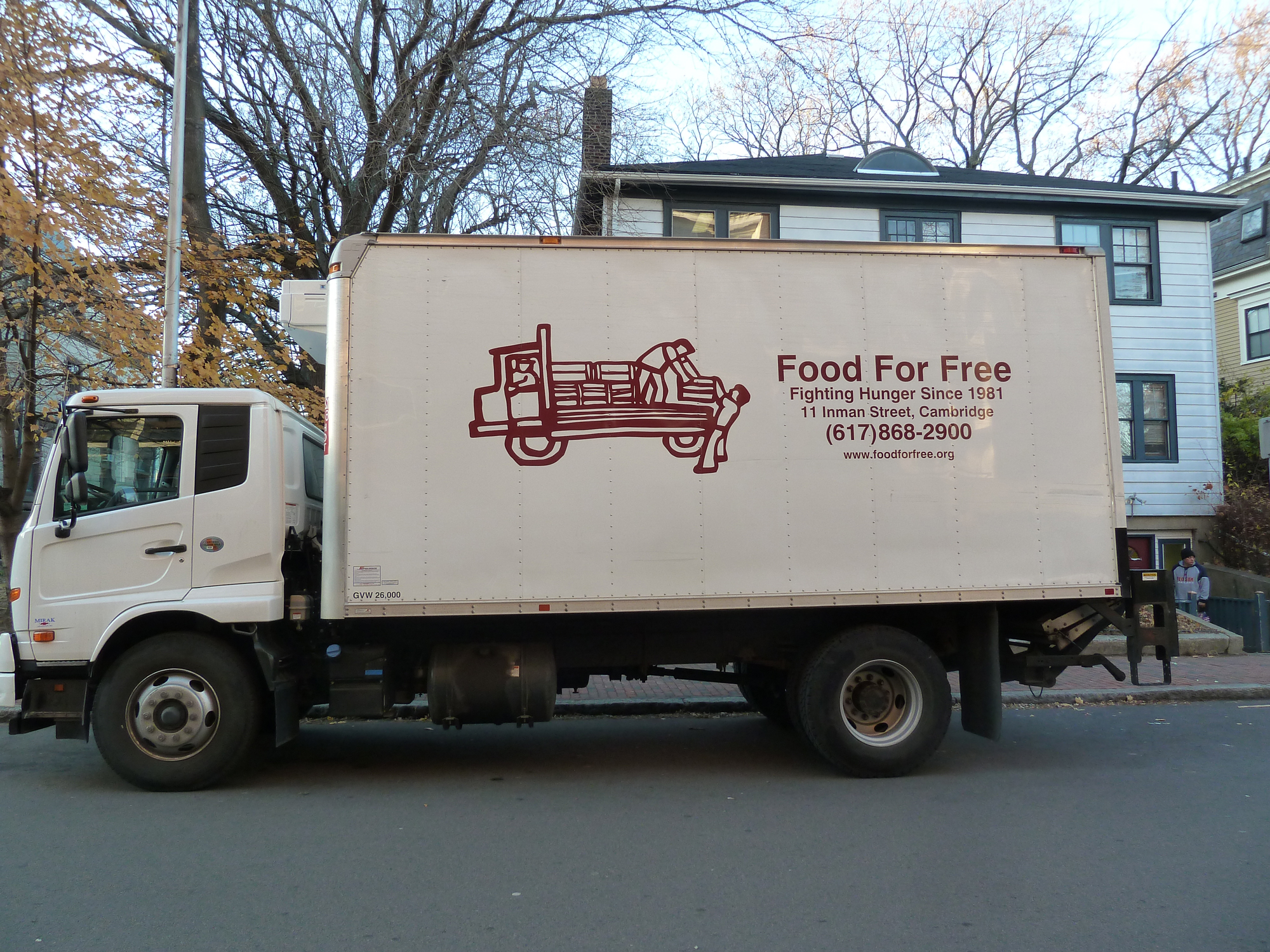 PORTER: Sometimes it’s really important to clean out your fields. It’s important to get anything that might carry disease through the winter out of your fields. There’s a lot of insects that over- winter in certain crops. And if you leave that crop to rot there, that pest can over-winter, it’s going to be there again in the spring. I think there’s probably some motivation in that as well.

BASCOMB: Gleaning is an ancient tradition. It’s referred to in the Torah and the Bible. Leviticus chapter 19 instructs, “When you reap the harvest of your land, do not reap to the very edges of your field or gather the gleanings of your harvest. Do not go over your vineyard a second time or pick up the grapes that have fallen. Leave them for the poor and the alien.” 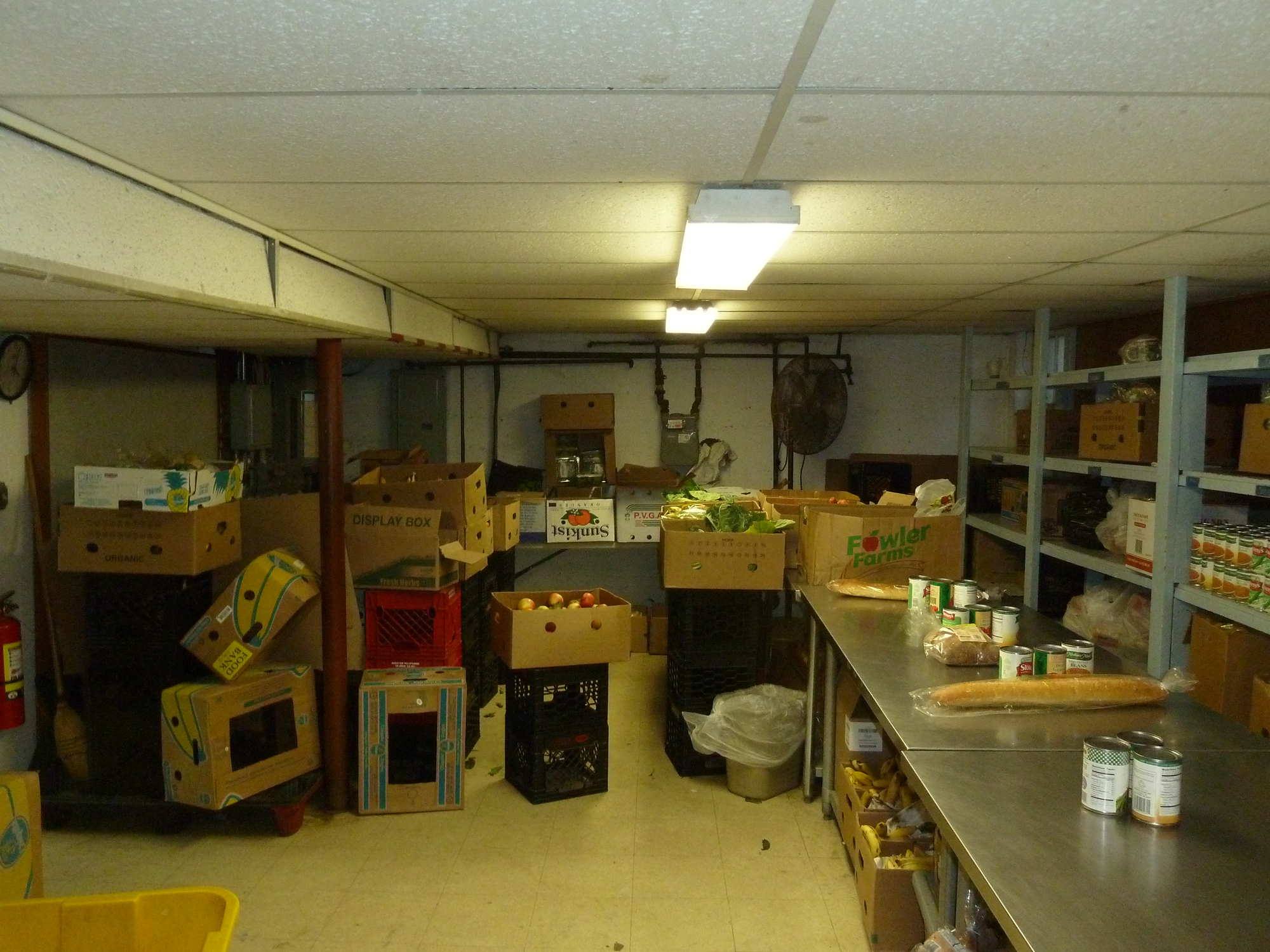 The food pantry in the basement of the Food for Free basement. (Photo: Bobby Bascomb)

Gleaning continued into the 19th century as a social safety net throughout much of Europe. Today there are gleaning organizations across much of Europe and the US. Duck Caldwell is Executive Director of the Boston Area Gleaners.

CALDWELL: This year we we’re going to recover over 70,000 pounds. That equals close to, when you convert it to four ounce servings, that’s 300,000 servings of fruit and vegetable.

BASCOMB: Caldwell says they pick at least 30 varieties of produce, all kinds of greens, eggplant, peaches, carrots, apples, turnips, squash… anything you might find in a farmers’ market can be gleaned when there’s a good harvest.

CALDWELL: We’re going to serve about 25 farms this year with our gleaning. There are well over 1,000 in this area. So the potential is huge. We’re doing a good job meeting the demand we’re getting currently from farmers, but the demand on the side where people actually need this food, there’s much more there, so there’s a lot of work to be done.

BASCOMB: After three hours of work the volunteers picked 576 pounds of lettuce. They pack the harvest into banana boxes and load them into a van for delivery. Roughly half of what’s gleaned goes to the non-profit, Food for Free, which distributes to 86 food banks from its headquarters in Cambridge. Sasha Purpura is the Executive Director.

PURPURA: Food for Free is an organization that essentially captures food that would otherwise go to waste, perfectly good healthy food, and distributes it into the emergency food system where it can reach those in need.

BASCOMB: Food for Free staff makes daily rounds to local grocery stores to collect good food that would be thrown away at the end of the day, but she says what the gleaners supply is special.

PURPURA: By far the gleaners’ food is without question the absolute best food we can get. It's the freshest, it’s local. The people who are receiving it love fresh vegetables as much as anybody else does.

BASCOMB: Purpura says it is relatively rare for food pantries to have access to fresh, local produce.

PURPURA: A lot of food pantries can get food from food banks but it’s typically shelf stable canned stuff. It’s very hard for small food pantries to carry produce because they don’t necessarily have the storage for it. They need it on the day that the pantry is opening, it’s volunteer run. And because the gleaners and Food for Free can deliver day of, it really allows them to offer more than canned sodium enhanced stuff.

BASCOMB: In the basement of the Food for Free office is a food pantry that serves hungry people in Cambridge. Sasha leads the way and introduces me to Aida Navarro, the food pantry manager.

AIDA: Hi, sweetheart. Are you the radio girl?

BASCOMB: I am. What gave it away? [LAUGHS]

BASCOMB: Aida has a kind face and an affectionate manner.

NAVARRO: I love the gleaners. OK, they come and bring the fresh vegetables from their garden, and I give them out here in the pantry to the community and everybody loves it.

BASCOMB (on tape): Why do you think they love it?

NAVARRO: Because it’s real food from Mother Earth from loving hands that planted it and it’s going to fall real good in the stomach. [LAUGHS]

BASCOMB: Freddy, the pantry’s food manager, stands amid boxes of produce and offers them to a small frail, elderly woman named Anne.

ANNE: Yeah. And lettuce? You have lettuce?

FREDDY: We have a spring mix or we have this….

BASCOMB: Why is that?

ANNE: Well, it’s very expensive. It’s something hard to get. So, I like it very much.

BASCOMB: What kind of things do you typically get this time of year?

ANNE: Anything green. It’s beautiful. What they do is so important for us. I get things I couldn’t afford. I get a lot of greens. It fills in spots I would otherwise neglect. And it’s a little gift. It makes people happy.

BASCOMB: Visitors to the food pantry are young and old, black, white, Hispanic, Asian and everything in between. Aida greats a familiar face.

BASCOMB: Rudolph West is a tall 63-year-old, missing most of his teeth, wearing an oversized trench coat. He says he’s never heard of the gleaners, but loves the idea.

WEST: I think it’s a beautiful thing. It’s charitable, someone’s taking the initiative to try to do something for others.

BASCOMB: West lives at the Y and says he doesn’t have access to cooking facilities so he can’t use the vegetables but he’s touched by the thought of the gleaners collecting food for the less fortunate.

WEST: It’s very helpful, and it’s good to be charitable, you know. Pay your tithes, that’s my motto. I’m a very religious person, which is a personal bond, but I hold things dearly in my heart and I shed tears over stuff like that. It shows how you can show piety like Jesus had. He was humble and submissive. That’s a good trait, a good characteristic, I like that.

BASCOMB: So a charitable tradition that dates back to before the time of Jesus is alive and well here in Massachusetts thanks to generous farmers and volunteers.

For Living on Earth, I’m Bobby Bascomb at the Food for Free pantry in Cambridge.