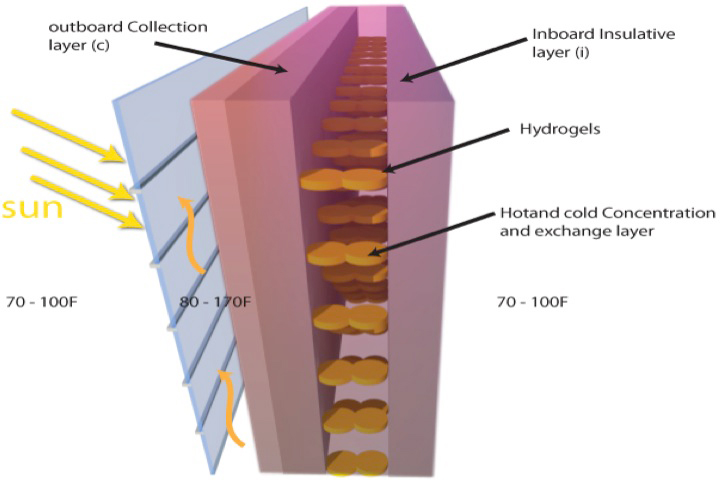 Energy efficient fuels and insulation are the usual climate-friendly ways to heat and cool our buildings. But as Laurie Howell reports from the IEEE (eye-triple-E) Spectrum series Becoming Bionic, some engineers are mimicking human skin to create better climate control.

CURWOOD: When we think of ways to heat and cool our buildings more efficiently, we tend to think of better insulation, and better fuels, perhaps. But there are some extraordinary experiments that go much further, including those that mimic the way skin regulates body temperature.

HOWELL: We begin in the Engineering Center at the University of Colorado, it’s a picturesque campus at the base of the Rocky Mountain foothills. This is where John Zhai, an architectural engineering professor, leads a multidisciplinary team of engineers and architects on a creative venture of a lifetime. They’re designing what they call a “Living Wall.”

HOWELL: Zhai calls the Living Wall the “skin of the building” because it would auto-regulate the temperature of a building just as skin helps regulate body temperature.

ZHAI: The veins underneath the skin can take the heat from the surface to the body and also can have fat that's kind of insulation. So this automatic system is natural in our body, so if we think of the whole building as a body.

HOWELL: It’s like a human vascular system of capillaries, veins and arteries: water is collected at each floor through small tubes and pipes within the living wall, controlled through a computerized brain or building automation system. The hot water is redistributed throughout the building for heating, domestic hot water or adding heat into the shaded living walls to augment the chimney effect for cooling. The entire system works on a basic law of thermodynamics. The living walls move energy from hot to cold very rapidly and efficiently, whether collecting or distributing heat through water or air. 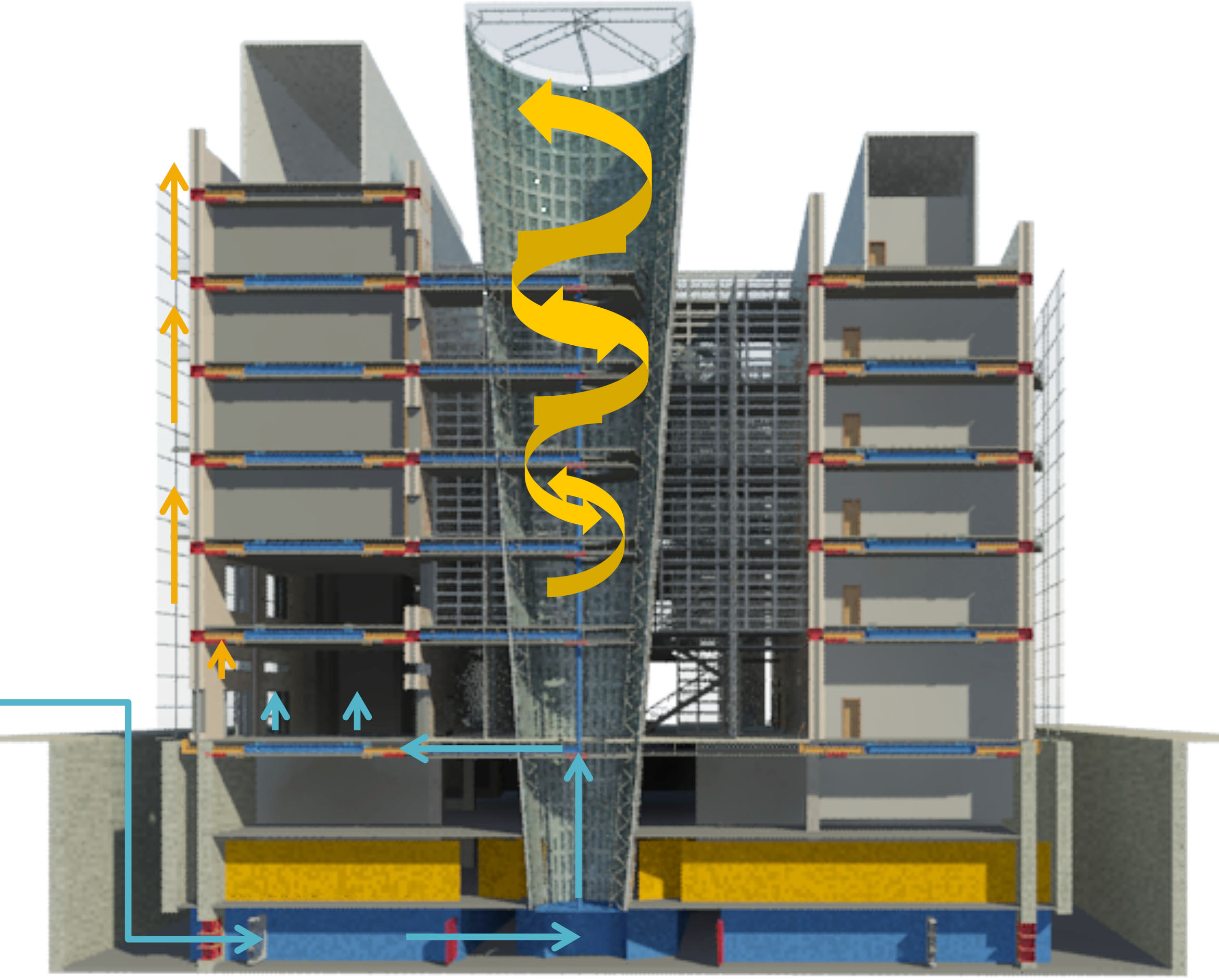 ZHAI: So the envelope of that's the skin. So, can we do something similar or mimic to this natural body system, which has fat insulation layers, have all these veins, blood flow, the air flow, all the stuff and then very likely we can have a building envelope that can adapt to the environment. So whatever environment is changing, the core body inside temperature is always constant. So if we can achieve that same thing that would be perfect.

HOWELL: Zhai says the living wall system could slash energy use by – get this -- 75 percent. And energy use decreases 75 percent, not by improving heating and cooling systems, but by eliminating them altogether. No more boilers or chillers to create that comfortable room temperature. The living wall system would use passive heating and cooling, working with the outside temperature instead of against it.

Zhai’s fellow CU professor Fred Andreas is the lead architect on the team putting this million-dollar prototype together.

ANDREAS: There's no reason, other than business as usual, that we heat and cool and light our buildings the way we have, as hermetically-sealed units that are disconnected from the environment. So the idea of the living wall is to turn the skin of the building into a living skin copying essentially biological processes and so trying to auto-regulate heat and cooling and ventilation and light through the skin of the building and supplant the huge HVAC systems, heating, ventilation, and air conditioning systems inside of any building and then using natural daylight as much as possible. 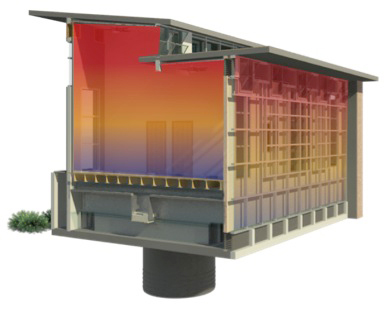 HOWELL: The outside layer will use current smart glass technology which can block or tune the sun’s rays and control how heat and light enter the wall. The next layer of the living wall is just open space for collecting and distributing passive heating and cooling. At the bottom of the wall we’ll have cool water coming in from a source, such as a river, a lake, the ocean or an underground aquifer. And the top of the wall will be hot from baking in the sun. Now think about how a chimney works and that’s what happens here: the cool-hot temperature difference produces an updraft, and that updraft passively forces hot air up, up, up inside the multi-layered walls, drawing cool air through the building and producing natural ventilation. The hotter the air, the faster it rises. So, as crazy as it is to imagine, for this passive cooling design, the hotter the wall, the better.

ZHAI: That's a testing room we have here which can test all the building systems, walls, systems. So this is one of the chambers. Watch the steps.

HOWELL: We’re walking along an HVAC system which stretches for roughly 40 feet. There are two rooms which can be made any temperature… this will be where the team installs and tests its first prototype.

ZHAI: So, you see all these air systems. We have water panels here. This can provide radiation. We can simulate solar radiation so we can mimic the outside environment, so we don’t have to go outside to test the performance of the living wall. 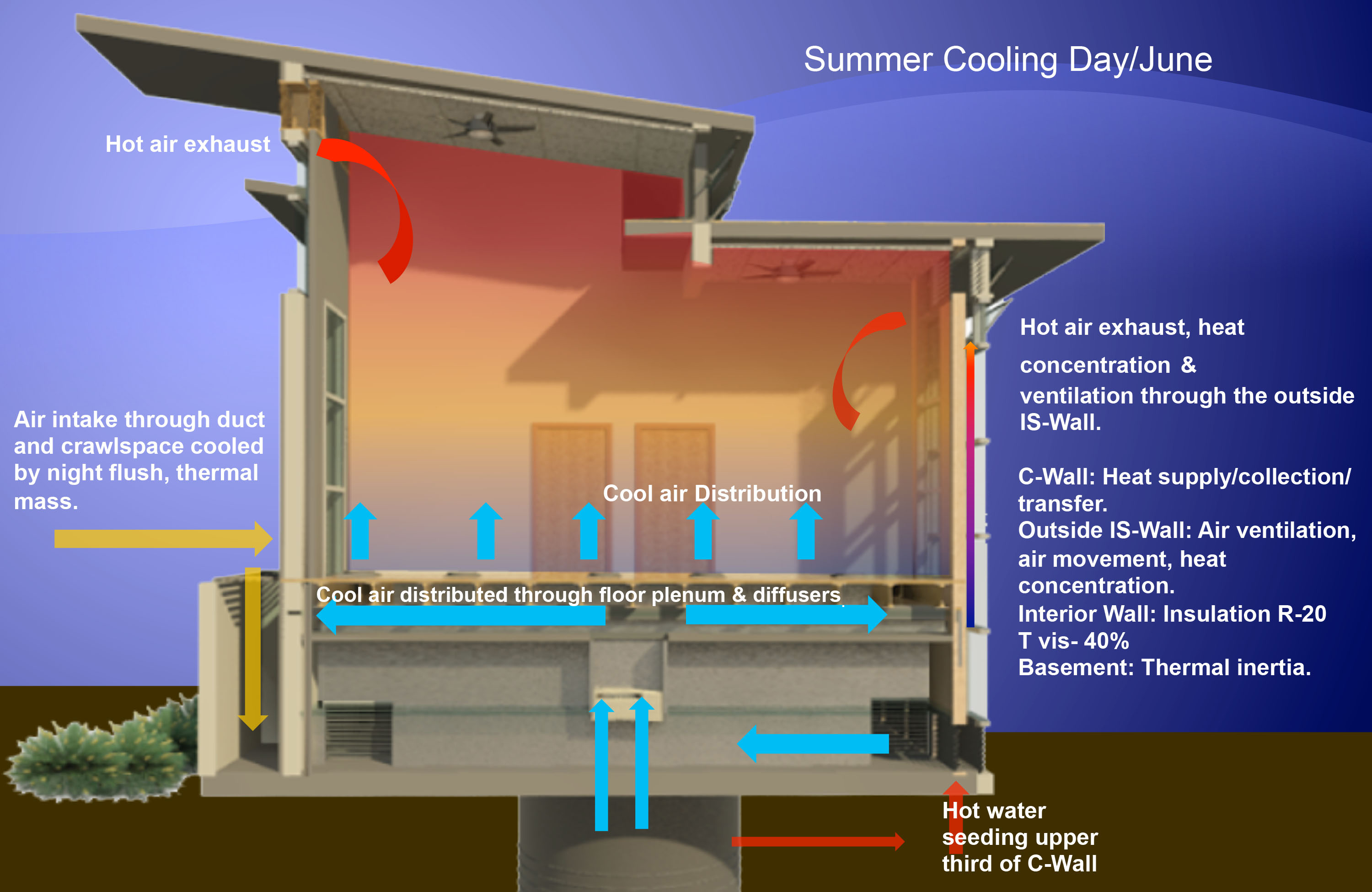 HOWELL: The team envisions one day creating Living Wall kits for retrofitting buildings, possibly even homes.  But right now, they’re focused on overcoming some puzzling design issues. Their biggest challenge is a layer in the living wall that will be made with something called hydrogels. Hydrogels are chemical compounds, or polymers, that absorb or release liquids depending on temperature… they’re used in products, such as diapers, and for a variety of purposes, such as tissue engineering. And, they are key to making the Living Wall work because when the temperature changes, hydrogels embedded in the wall begin pumping water. Depending on the temperatures outside and inside the Living Wall, the hydrogels pump hot or cold water from one side of the wall to the other, cooling or heating the building. The big challenge for these researchers right now is how to contain the hydrogels within the Living Wall:

ZHAI: Right. That's why we cannot use traditional concrete or wood. We'll have to use a polymer material that's porous medium so that these kinds of materials can be embedded or attached somewhere in the polymer, those bubbles so that makes a whole piece of a wall.

ANDREAS: And here's the other challenge is it can't be glass because glass, when it's formed, is so hot that it would destroy these hydrogels, so we have to figure a way to get these hydrogels infused into this panel at a relatively low temperature.

HOWELL: This is not just another greener building design, this is a change in the way we’ll design the buildings of the future.

ZHAI: Typical systems and typical approaches with the same kind of HVAC systems although they're very high efficiency and they're very high technology, they're still using the same assumptions that we've used throughout the 20th Century. And this fundamentally changes it. Basically moves away from the idea of interior conditioned buildings to passively controlled buildings.

HOWELL: And that’s exactly why it has captured the imagination of the next generation of building designers. Grad students Tamzida Khan and Scott Rank are excited about what’s on the horizon for smart building design.

RANK: Pretty soon there shouldn't be green architecture. It should just be architecture and that should be in all of it, integrated into it. So, I think, yeah, we’ve come a long way, but I think it definitely has a lot further to go as well.

KHAN: If we don't take risk, then we will not move forward and I think it's really important for us to take risks.

ANDREAS: I keep saying to my students I fundamentally believe that they'll be looking at this period of time right now, this change to the 21st Century that they'll be looking back at this in 1,000 years as the renaissance, equivalent to the artistic and cultural renaissance that happened previously. I think that this is an architectural and engineering renaissance that we're experiencing right now at the early part of the third millennium. I think the sky is the limit.

HOWELL: In the early part of the third millennium, reporting on what’s possibly an architectural and engineering renaissance, I’m Laurie Howell.


Listen to the rest of the IEEE Spectrum series Becoming Bionic

Check out the website for Colorado University’s “Living Wall”