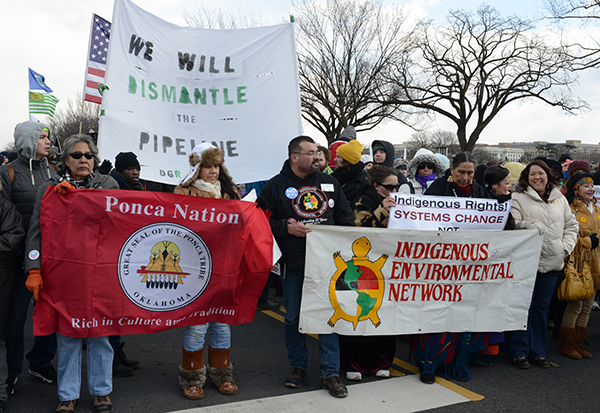 Legislation to approve the Keystone XL pipeline is now on the President’s desk, but the project has faced stiff opposition for years. As Dallas Goldtooth of the Indigenous Environmental Network tells host Steve Curwood, tribal nations say that despite the direct impact the pipeline’s route though their lands would have, the US government has failed to adequately consult and negotiate the matter with them.

CURWOOD: Both houses of Congress have now passed the bill to allow the proposed Keystone XL pipeline that would bring tar sands oil from Canada to Gulf Coast refineries, and the measure is on President Obama’s desk where he’s promised a veto. The proposed pipeline has been a point of contention for various groups in the US and Canada, from environmental activists and unions to oil workers and tribal nations. On both sides of the border, tribes have been especially vocal in their objections, complaining of treaty violations as well as potential pollution as well as accelerated damage to climate stability. Dallas Goldtooth is campaign organizer for the Indigenous Environmental Network.

CURWOOD: Now, tell me what tribal nations are primarily impacted by the proposed Keystone XL pipeline, and where are they?

GOLDTOOTH: Well, if you start from the very source of the tar sands - you go right to the tar sands development area in northern Alberta, you have the Dene and Creek Nations in that area who are the first ones on the front line from the actual extraction of the tar sands oil. The pipeline starts in southern Alberta which is in Blackfoot country and then moves all way down into the United States crossing Nakota, Dakota Anni tribal lands moving into South Dakota which is the lands of the area of the Oceti Sacowin which are the Dakota and Lakota tribes, and it moves on down through Nebraska which is traditional Omaha, Ho-chunk and Panka territories. So those are some of the tribes that this pipeline is proposed to run right through the traditional territories.

CURWOOD: What are the concerns expressed by tribal nations about Keystone XL? 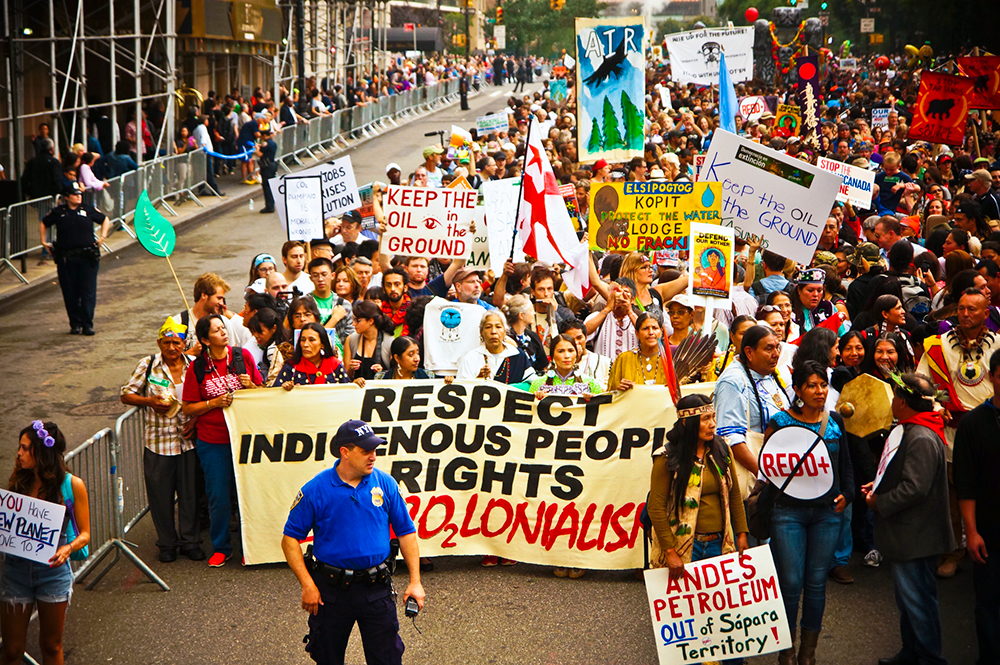 Tribal nations and indigenous people at the People’s Climate March in NYC on September 21, 2014 oppose Keystone XL and other colonialism that might affect their way of life. (Photo: Light Brigading; Flickr CC BY-NC 2.0)

GOLDTOOTH: There's a number of concerns. I mean the primary concerns is that the permitting process, the State Department’s process in dealing with this has really overlooked tribal treaties with the federal government. I think that a lot of tribes are really frustrated at the lack of inclusion in this process, that's guaranteed through our treaty rights, and this pipeline is passing right through the heart of the Oceti Sacowin treaty area that was established before the Laramie Treaty back in 1868.

So, a lot of the tribal nations really stick to the wording and negotiated agreements that were made and are treaties and we really encourage the federal government to really stick to those, and so you know that's one of the primary concerns is just lack of inclusion, lack of discussion with tribal nations and how we feel about the issue. Another concern is the potential danger that the Keystone XL pipeline poses to our water. It is going to be crossing over the Ogallala Aquifer, which feeds into well over 200,000 people in South Dakota, but also provides a vast amount of resources to the agricultural breadbasket of America. The potential for a spill there is far too great of a risk for not only tribal members but for non-native people to take in this region.

CURWOOD: What do tribal nations do to express these concerns?

GOLDTOOTH: They've tried a number of different ways to really express their frustration, and a lot of it is through the established mechanisms between the federal government. You know, one of the primary things is that the State Department, in its FEIS, was to consult with tribal nations on the issue and get their input. That hasn't happened. There hasn't been a really full and proper consultation with the tribes, and the tribes have made that known in a number of letters to the Department of Interior, the State Department, expressing frustration with this process.

CURWOOD: What would be considered an appropriate way for the US federal government to consult with tribal nations on Keystone? 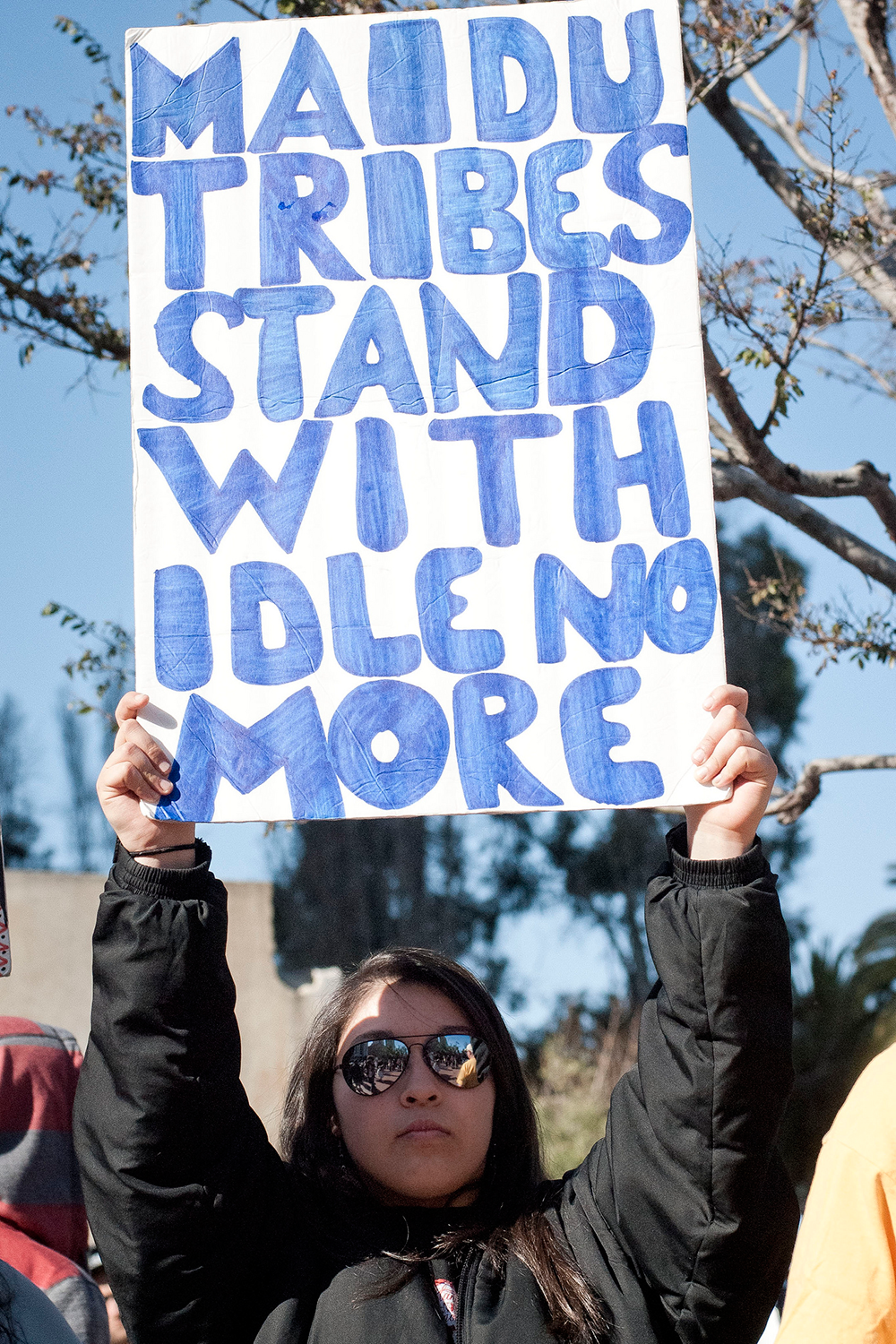 The Maidu Tribes stand with the Idle No More movement, which advocates for, “A peaceful revolution to honour Indigenous sovereignty and to protect the land & water.” (Photo: Sasha Kimel; Flickr CC BY 2.0)

GOLDTOOTH: To get right to the point, the tribes have actually stated themselves that they would like to have President Obama or actually Secretary Kerry of the State Department to actually sit down with the tribes. Given the federal Indian law that we have a nation-to-nation relationship with the federal government, that just seems proper. The State Department, when they talked about that they consulted with tribes, some of those consultation "meetings" were conference calls with seven different tribes in the room and a low-level person or they were in-person meetings, but it was always a low-level person within the State Department. A lot of tribes just found that offensive to be plain spoken, as they expect something higher up given the nation-to-nation relationship.

CURWOOD: Now, the Environment Protection Agency, the US Environment Protection Agency, recently released a letter stating that many of the concerns regarding Keystone XL were not probably evaluated or under evaluated, and some of those do pertain to tribal nations concerns. What's your take on that letter from the EPA? How far did it go to meet your concerns do you think?

GOLDTOOTH: You know the Indigenous Environment Network organization really does applaud EPA to really change their stance on it. I know that last year, the last comments on the FEIS that they weren't as forthcoming with criticism of the pipeline’s impacts, and also the tar sands impacts. I think that the biggest switch and that I really do appreciate is that this acknowledgment that the Keystone XL pipeline will contribute to greater carbon emissions, carbon pollution, it will contribute to an encouragement for companies and corporations in the tar sands area to continue to actually ramp up and increase oil production. I think that has always been a talking point that proponents of the pipeline have always used and continue to say that this will not contribute to greater carbon pollution, but that's just plain not true, and so I really do appreciate the EPA stepping forward and making that note.

CURWOOD: How tough do you think tribal nations will be if for some reason the Keystone XL goes forward and they try to bring the pipeline across the tribal nation land?

GOLDTOOTH: A lot of people are well aware of the feistiness of Lakota Dakota people especially in relationship to foreign entities coming in without their consent and consultation, so should the pipeline be put into a situation where it does get approved and it's looking to be constructed, expect a very robust and strong response from the tribes along the route of the pipeline.

CURWOOD: Of course, the Lakota and others have a pretty tough reputation in American history. I mean, we all think of the Battle of Little Bighorn, and the tribal nations won.

GOLDTOOTH: Exactly. Our tribes, the Oceti Sacowin, the Lakota, Dakota, and the Nakota nations are very proud of our political activism. I can't speak for the tribes myself, but I know that it has been made in public comments from the Rosebud Sioux tribe that they actually do already have an encampment on the proposed route for the pipeline. Should the pipeline get approved, they are going to ramp up that encampment and make sure that there's a strong presence there throughout the process. And I know that there are a number of other locations that tribes are really making a claim and saying, "This is our territory, our land, and you shall not come through." 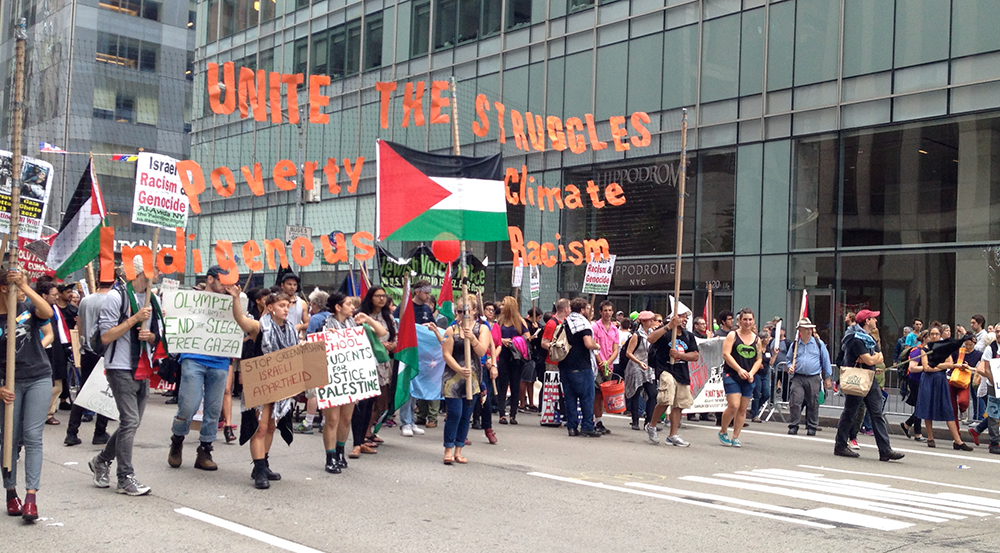 Tribal nations and indigenous peoples in NYC at the People’s Climate March walk, united, against the actions that would worsen climate change. (Photo: Emmett FitzGerald)

CURWOOD: Dallas, there's a movement called "Idle No More" which and let me quote here, "calls on all people to join in a peaceful revolution to honor indigenous sovereignty and to protect the land and water". It seems to be particularly strong in Canada. To what extent is the Keystone XL pipeline controversy producing alliances, allegiance, among US tribal nations and the first nations in Canada and elsewhere?

GOLDTOOTH: It's an amazing thing to see. A lot of our tribal nations have developed strong ties with other tribal nations that are fighting oil development and fracking development in their own respective areas. We're talking with folks in British Columbia and they're resisting the Gateway pipeline up in British Columbia. We're also looking ahead to Energy East which TransCanada they're already claiming as the new...that's the next route. Should Keystone XL be defeated they're going to put resources into this Energy East pipeline. Well, we're already working with communities along that route, native and non-native to provide support and give them, "Hey, this is what we did. Let's see if we can fight it here". You know, we also stand in solidarity with our brothers and sisters who are on the front lines up in the tar sands northern Alberta who are seeing cancer at appalling rates. And so, we don't see a border between Canada and the United States. What we see are fellow native people that are suffering because of continued colonial process of extracting minerals and resources from our communities without our consent. And so we really want to stand in solidarity across no matter what border may be with our indigenous brothers and sisters.

CURWOOD: Dallas Goldtooth is a Campaign Organizer for the Indigenous Environmental Network. Thanks so much for taking the time with me today.

GOLDTOOTH: I am so happy. Thank you very much for listening.

More about the KXL pipeline