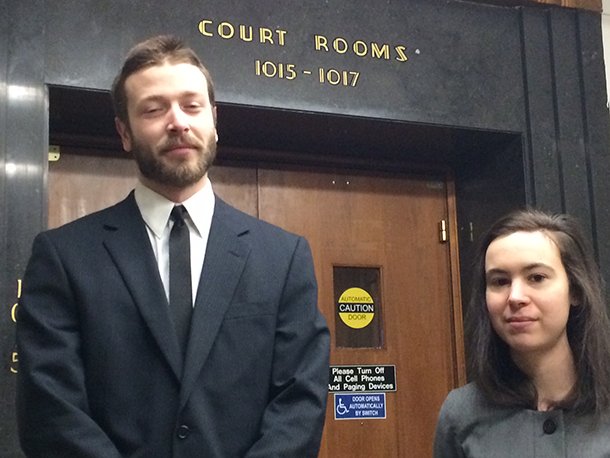 On February 20th, 2015, Harvard students got their chance in court to plead their case for the university to dump its fossil fuel investments. University of Massachusetts Environmental Law professor and Living on Earth’s Fellow John Duff was in court, and tells host Steve Curwood about the hearing and the broader context of the case.

CURWOOD: It’s Living on Earth. I’m Steve Curwood. As promised, President Obama has vetoed the Keystone XL Pipeline bill, saying it conflicts with established executive branch procedures that allow full consideration of national interest issues such as security, safety and the environment. The massive demonstrations against this pipeline to bring Canadian tar sands crude across the heartland and down to Gulf Coast refineries has helped make the decision both high stakes and high profile. In that, it joins another part of the climate action movement that demands endowments and pension funds get rid of fossil fuel investments.

Another battle line has opened in that confrontation...Harvard students, represented by students at the Law School, have taken the University to court. Their suit claims Harvard’s holdings of fossil fuels violate the University’s mission to educate and advance the well-being of youth, and will bring harm to current students and future generations. The case got its first hearing on February 20 when the University asked a state court judge to throw out the suit on procedural grounds. Living on Earth fellow John Duff is an Environmental Law Professor at UMass Boston and was in the courtroom for the hearing. John, what went down?

DUFF: Well, there were three parties in the courtroom, Steve. The Harvard students were there. They filed a complaint back in November seeking to get a court order to force Harvard to divest of its fossil fuel holdings. Harvard management was there, represented by its attorney, saying that it's up Harvard to make its decision about investments. And the Massachusetts Attorney General's office was there. Their role is to regulate public charities in the state.

CURWOOD: So was there any argument about whether or not climate change is a problem?

DUFF: No, it's really interesting, Steve. All three of the parties and the courtroom agree on some really important things. They all agree that climate change is real. They all acknowledge that it's the result of human activities, and they've all made very public statements saying that something has to be done. In fact, it was the Massachusetts Attorney General's office back in 2007 that led the charge to force EPA to consider greenhouse gases as pollutants because they pose a harm to public welfare.

CURWOOD: So if they all agree that climate change is a problem, what's left argue about?

DUFF: Well, basically the university doesn't want to be told how to make its investment decisions, and the students were also arguing that they should have a right to represent future generations under what they're calling a new wrongdoing, something they call “intentional investment in abnormally dangerous activities”.

CURWOOD: So how did the Harvard administration push back against the student claims?

DUFF: Well, Harvard said that as long as its investment decisions are legal, no one should be allowed to tell them to do otherwise.

CURWOOD: Now, what about the future generations argument?

DUFF: The Harvard students wanted to be recognized as the representatives of future generations, but the fact is they have no legal status and haven't gone to any preliminary steps to be recognized as the guardians or representatives of future generations and the court had a hard time with this because ordinarily to argue on behalf of someone else you first have to be legally recognized. They were trying to do it all in one piece, and the judge was really not amenable to that.

CURWOOD: And the attorney general's office?

DUFF: The attorney general's office said it's their exclusive role to regulate public charities, but the judge mentioned there's an exception to that rule, and the Harvard students took advantage of that exception. They said that they get such a special relationship with the university and that they are going to suffer harm different from the general public that they ought to have a right to bring a case to court.

CURWOOD: So how did the students do when they argued their case?

DUFF: The students had an easier time highlighting their special relationship with Harvard—they are Harvard students after all. But they had a harder time differentiating what harm they may suffer compared to the general public. They were fighting against some longstanding general legal principles. Getting a court to recognize this new wrongdoing doesn't take place at a lower court level. Usually you have to make a claim like that, lose, and get it all the way up to the state high court before you can get a new law recognized.

CURWOOD: So in other words, the students are arguing that it's time for the law itself to change?

DUFF: That's right; they say climate change is a new and different threat and it's time for the law to catch up.

CURWOOD: So if the law is indeed slow and evolving, John, does that mean that the divestment effort is just doomed in the courts?

DUFF: No, there's a long history of the way that the law evolves and usually social movements progress when there is a combination of court action, public demonstrations, and other efforts to shift the cultural landscape. Remember, in 1961, James Meredith had to sue just to get into a university at the University of Mississippi, and he did that as part of a broader context to advance the civil rights movement. And the students are arguing that, like the civil rights era, climate change is something that needs to be addressed on a universal level, and it has to be done now.

CURWOOD: Living on Earth's John Duff is an Environmental Law Professor at UMass Boston. Thanks so much, John.


Our coverage of the Harvard Student Plaintiffs’ argument for divestment