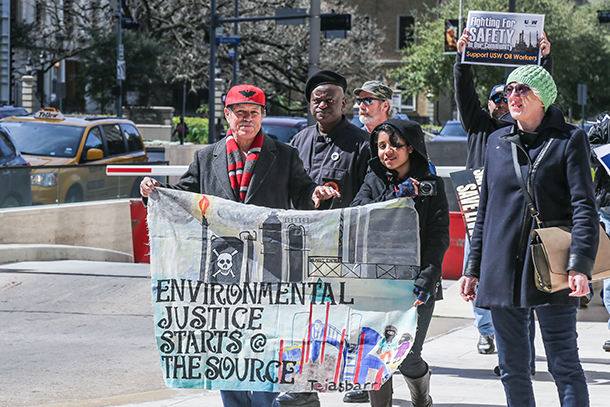 Eco-activists on the union picket line during the refinery workers strike in Texas (Photo: Elizabeth Brossa; Flickr CC BY 2.0)

CURWOOD: It’s Living on Earth. I’m Steve Curwood. Oil refineries are inherently dangerous places to work – plagued by leaks and explosions – and safety conditions were at the heart of the six-week workers strike that was recently settled with a tentative agreement. The union workers on the picket line also won support from a number of environmental organizations, demonstrating an important alliance between those groups. To discuss these developments, we’re joined now by Joe Uehlein, Executive Director of the Labor Network for Sustainability. Welcome to Living on Earth, Joe.

CURWOOD: Now, your organization, the Labor Network for Sustainability, put out a call for environmental organizations to support this strike. Why did you do that?

UEHLEIN: Well, we did it because historically the big Shell strike in 1973 was a turning point in labor environmental engagement. We had just had Earth Day...1970 I think was the first Earth Day, and then '73 this big strike hits in the oil industry and there was a lot of support from the environment groups. They won the strike but then there was also this deeper level of engagement between labor and environmental movements, so whenever these kind of things happen in this case it was clear cut and we came out quickly with a call for support because we need to continue to deepen those relationships, especially in an era of really runaway global warming and climate change which no one was thinking about in 1973. 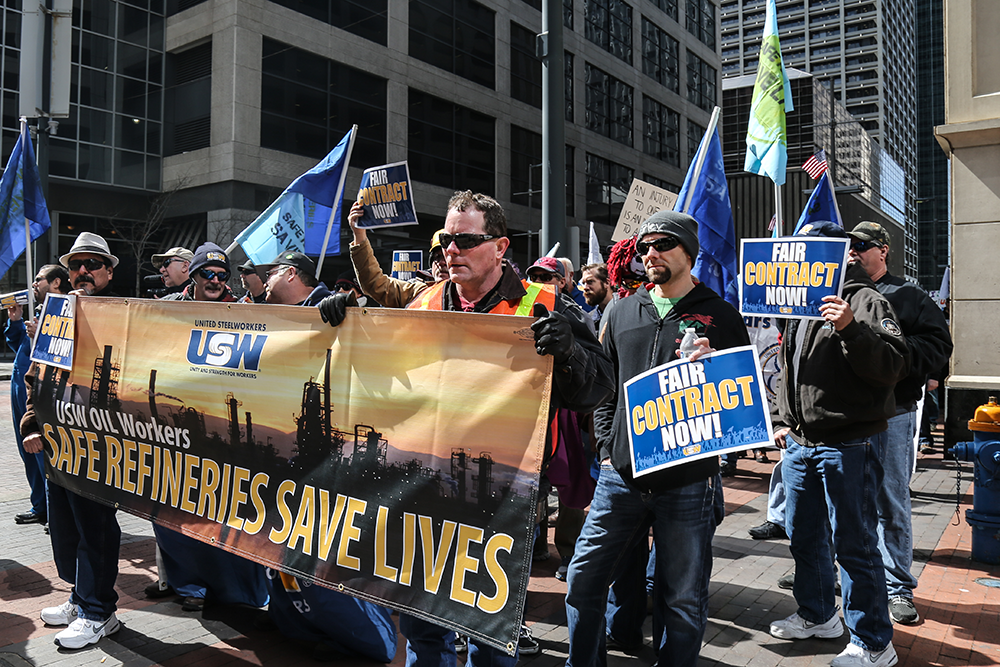 UEHLEIN: Well, Oil Change International, Friends of the Earth, and the Sierra Club, they were all right there real quick with really good statements. Bill McKibben from 350.org, he was right there with a great statement, and there were others. Both local environmental groups in the areas where these refineries are, as well as statewide and national organizations.

CURWOOD: Even with this history we don't often hear stories about collaboration between labor and environmental communities. For example, in Appalachia you have the United Mine Workers union very concerned about the carbon regulation, environmental regulation, and a number of environmental groups who aren’t very interested in protecting coal-mining jobs. So, a history of tension here. 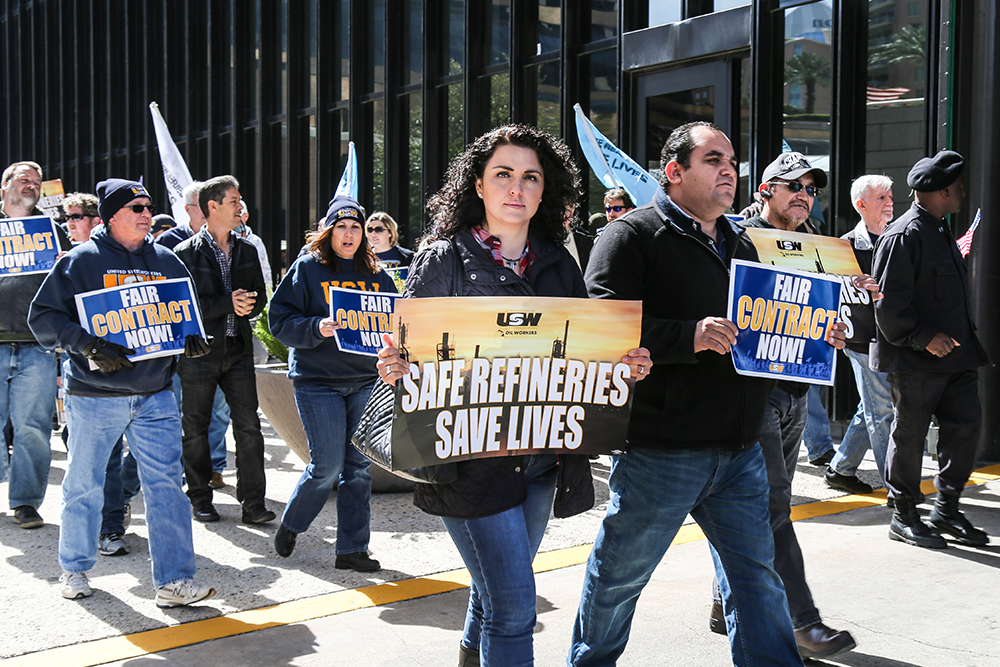 UEHLEIN: Yeah. Even in an era where we know we have to have dramatically reduce carbon emissions quickly, no worker, no coal miner, no fossil fuel worker should be the roadkill along that path. We should be fighting for just transition programs and strategies to provide for those workers and communities that might be hurt by a transition to a clean renewable energy regime, and we're only going to win those if labor and environmentalists fight together for that, so we're always working with environmental organizations to get past what I call their well-earned reputation of being insensitive to working people's concerns, and you get past that by really trying to understand the primacy of work in people's lives – understanding it, honoring it, and then fighting to protect those who are going to be damaged by these transitions. We've seen it with globalization and the loss of our industrial base where tens of thousands, hundreds of thousands of workers who had good paying jobs in major industry with healthcare and pensions lost it all. We need to change that past paradigm and provide a real sort of a G.I. Bill of Rights kind of program for working people and help them transition into something different. It doesn't have to be that they transition to renewable energy, it might be that, but the transition can be into other industries, they just have to be good ones that pay family supporting jobs. That's the fight and that's the linkage between environmental and climate activism and addressing income equality. 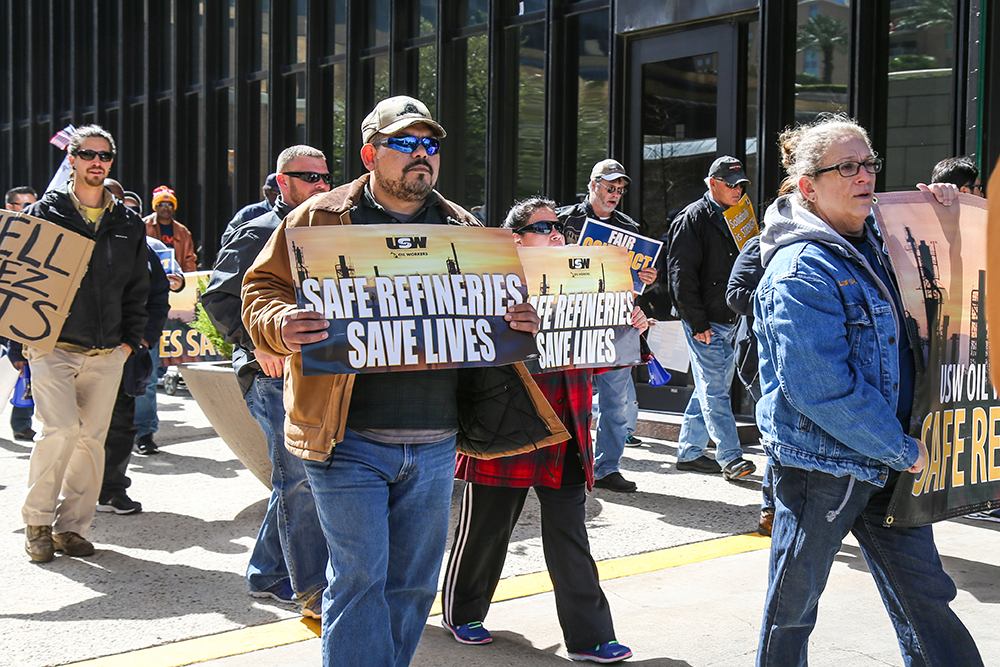 CURWOOD: So what are you guys doing to try to bring labor and the environmental movement closer together?

UEHLEIN: We're doing a lot. We talk a lot about all the industries that are in transition and how to do that in a just way. We're always talking to labor people about the importance of understanding the climate crisis and the impact it's going to have on labor. Climate change is the real job killer. If we don't address it, a lot of jobs are going to be lost.

CURWOOD: What are the jobs are going to be lost by climate change?

UEHLEIN: Well, think about in Maryland, we have thousands of miles of coastline, and the ports, those jobs are going to be lost. The agriculture in the southern part of the state, which is all very low-lying land, that's going to be lost. Most of our major airports are at sea level. They're all going to be impacted, all the roads to and from the ports, that's going to get shut down with more intense storms, more frequency of storms, and just rising sea level itself. So the job loss is going to be immense even as temperatures rise, productivity goes down in construction across the board. So on the flip side then, we're working on a study right now of how to create climate friendly jobs quickly and I say quickly because this study will not only identify the clean energy jobs - it will do that...solar, wind, geothermal and others - but we also have to create jobs that are like shovel ready now and put people to work and that gets to the other industries that are in transition that we need to be focusing on. 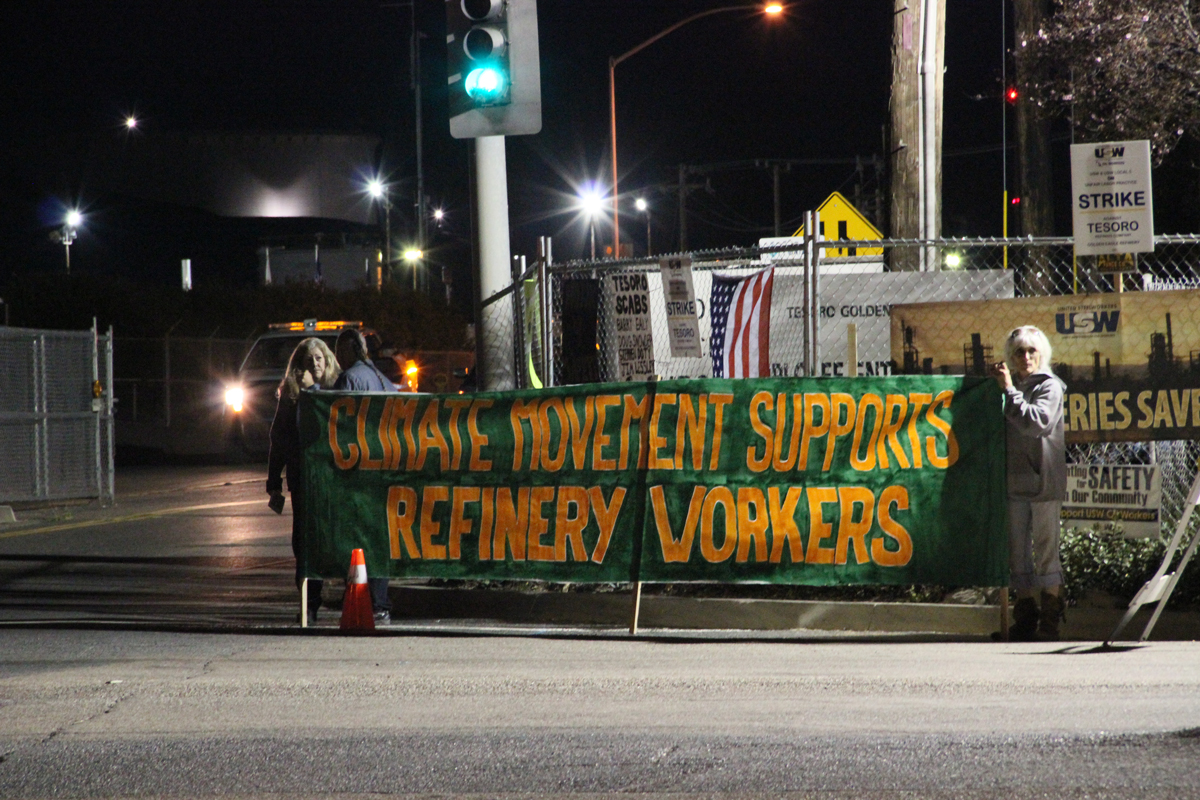 UEHLEIN: Well, for example agriculture and food. We live in a country with one of the most abundant food supplies on the planet, and it's hard to imagine a country that could mismanage it worse than we have. It all needs to be redone. Our whole way of agriculture and supplying food is in transition now and has been for a decade. If we think about Kentucky's history, hemp used to be the largest agricultural crop in the state. We're living in an era of legalization of the cannabis plant, which includes hemp. Let's get it back in there in Kentucky, and let's start to produce and put those miners to work with and hemp and hemp-related products. 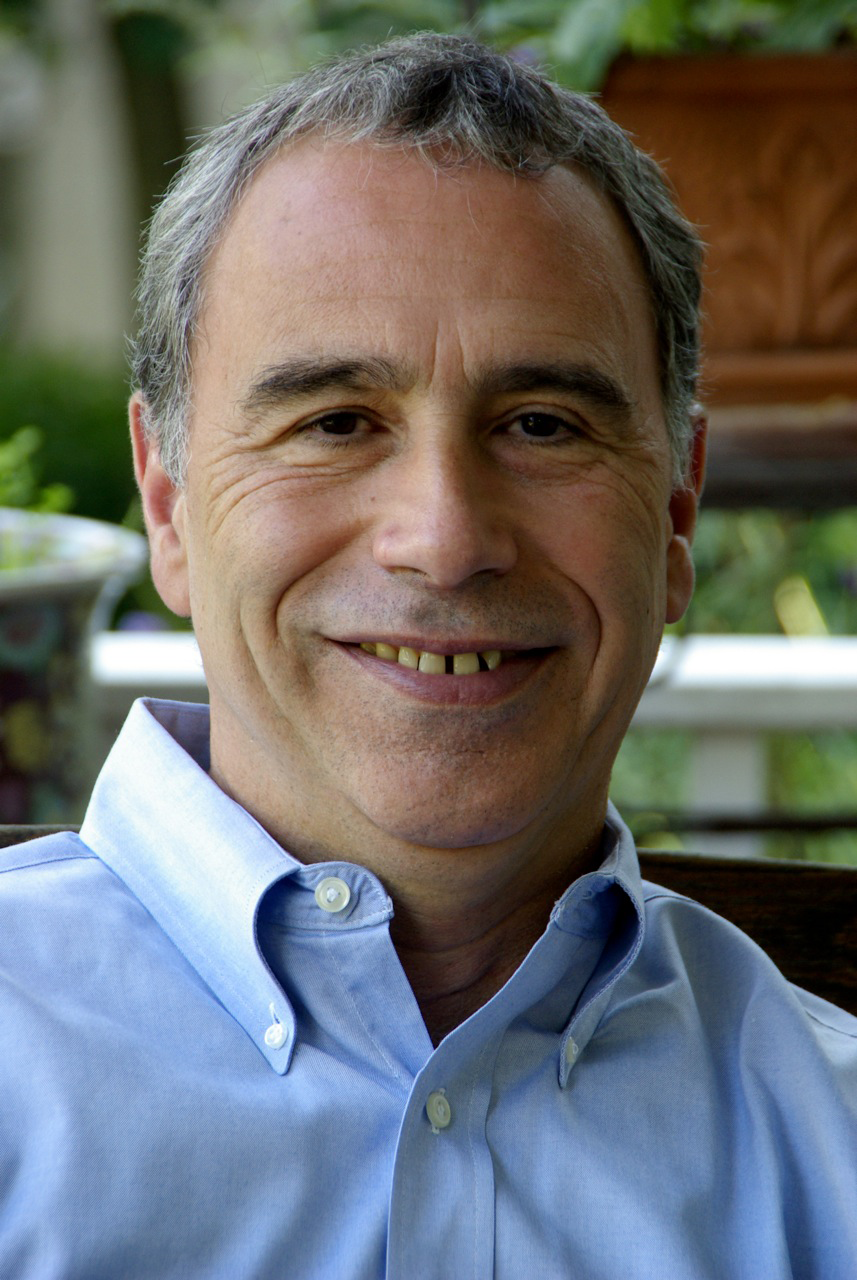 Think broadly is the point. Education. If you've got kids in school you know that if the class size is 25 you're lucky. There should be 10 kids in class. We should employ twice the number of teachers and pay them more and we can do it. What the opponents always say is we can't afford it. We could put solar panels on every residence in the United States for the cost of the Iraq and Afghanistan wars. We have the money. We just need to redirect it and put our minds to using it in a better way.

CURWOOD: Joe Uehlein, Executive director of the Labor Network for Sustainability. Thanks for joining us, Joe.

UEHLEIN: My pleasure. Thanks for having me.