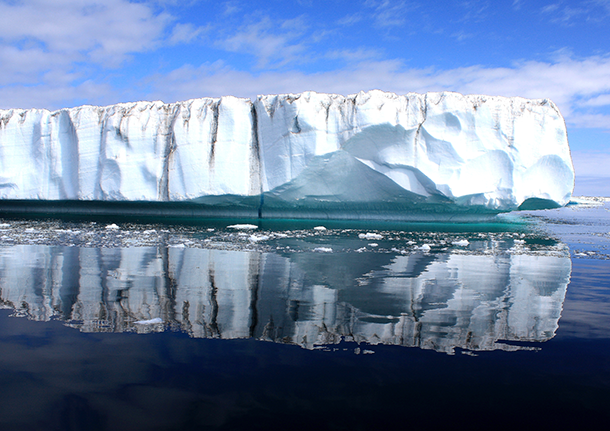 The Atlantic Conveyor Belt is a system of ocean currents that bring warm temperatures and important nutrients to the waters off of East Coast America and Western Europe. But as global warming melts ice in Greenland, the influx of fresh water seems to be slowing the northward drift down and could shut the system down altogether. Climate scientist Michael Mann tells host Steve Curwood that could spell trouble for the ocean and the economy.

CURWOOD: It’s Living on Earth. I’m Steve Curwood. The Gulf Stream brings warm water north up the Atlantic coast of the US and feeds currents that help create Europe’s mild climate, and it may be in trouble. A study just published in Nature Climate Change suggests that this system of ocean currents that regulates temperatures might be changing. One author of this report is Michael Mann, Distinguished Professor and Director of the Earth System Science Center at Penn State University, who says there is cause for concern.

MANN: So there is ocean current, we sometimes call it the conveyor belt or the North Atlantic Drift. It's this current that brings warm water from the subtropical regions of the North Atlantic up towards Iceland and the northern latitudes in Europe. Well, we have long suspected that as we continue to warm the Earth and melt ice - the Greenland ice sheet, for example - as ice melts and runs off into the ocean it's freshening the ocean. And it turns out that when you freshen the ocean in the northern latitudes of the North Atlantic ocean, you make the surface waters less dense, and if you make those waters less dense, they no longer sink and they no longer drive this conveyor belt, this ocean circulation pattern, so there's this potential that we could see a substantial decrease or even a complete shutdown of this mode of ocean circulation which is so important for delivering heat to the high latitudes, keeping the climate of Europe moderate.

CURWOOD: Now, when you say it keeps Europe warm, we're saying places like England, which is far north of eastern United States - New York, Boston - tends to be much warmer and has an earlier spring.

MANN: That's right. And of course, Western Europe relies upon that moderate climate. If they were to lose that moderate climate that would obviously be problematic for them, for their economy. The pattern of climate, of rainfall, of drought, of temperature, that we rely upon today, and we rely upon the stability of those climate patterns for human civilization, well, if they were to change abruptly, that could really spell trouble, for us, for other living things, so any abrupt change in climate could potentially be catastrophic. We have long suspected that the North Atlantic Ocean circulation, the conveyor belt is one of those components of the climate system that could potentially undergo a very rapid change if we continue to warm the planet with fossil fuel burning and increased greenhouse gas concentrations. The climate models predict that we could see that current begin to shut down perhaps by the end of the century. As it turns out, the models appear to be too conservative because in our latest study we find evidence that that current is already weakening substantially and could be much closer to a total collapse than current generation climate models would suggest.

CURWOOD: Some of the things that you're describing echo the plot of The Day after Tomorrow, a Roland Emerick film. 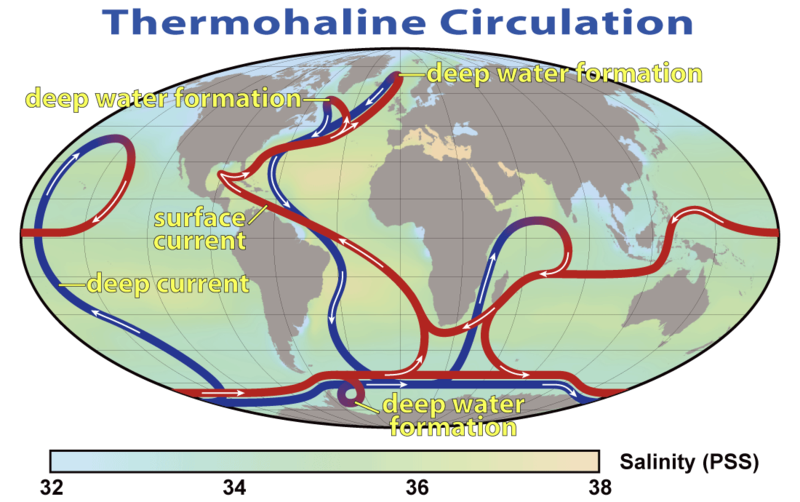 Thermohaline Circulation is the name of the conveyor belt current system that drives a lot of ocean circulation. (Photo: NASA Earth Observatory)

MANN: Yes, and I actually watch the movie with my first-year students and we picked holes in not just the plot but in the underlying scientific plans because while there's a grain of truth in the movie, and the grain of truth is the possibility that we could see a shutdown of this conveyor belt ocean current system, the fact is that it wouldn't play out over a few days, it would play out over a few decades. It wouldn't cause massive tornado outbreaks in Los Angeles or a return to ice age conditions throughout the entire northern hemisphere. The effects would be more subtle. But they would nonetheless be potentially detrimental. That's important to keep in mind as well.

One of the greatest concerns here is that if we did shut down the ocean circulation system, the conveyor belt, while we wouldn't get a new ice age in the northern hemisphere, we would fundamentally change the flow of nutrients that feed ecosystems in the north Atlantic Ocean, which is one of the most productive regions for sea life in the entire world, and we would potentially lose access to fish populations that we rely upon right now, at a time when we're already seeing threats to fisheries from ocean acidification, from overfishing. And so, while the impacts wouldn't play out like a Hollywood disaster film, they could still be disastrous for us.

CURWOOD: Now, in terms of this change in ocean circulation, when has this happened before in history?

MANN: Part of the original speculation for why this could happen, it wasn't based on climate models at all, it was based on the fact that this happened. It happened 12,000 years ago roughly, as we were coming out of the last ice age, it began to melt a whole lot of ice and all that fresh water flowed off into the North Atlantic Ocean where it formed this lens of fresh water, which inhibited this conveyor belt circulation. We think it shut down then. We didn't go back into a full-blown ice age but we did see a return to quasi ice age conditions in regions neighboring the North Atlantic.

So because it happened before in response to a natural warming - that was the warming because of changes in the Earth's orbit relative to the sun - now we are undergoing a different warming. We're warming the planet not from natural factors that act over thousands of years, but the human factor of increased greenhouse gas concentrations. It's a much more rapid warming, but there isn't nearly as much as ice around as the end of the last ice age. And so, there isn't the potential for quite as much of that fresh water running off into the North Atlantic. We don't think we're likely to see anything that severe. But it is the closest thing we have to an analog for what could happen to this current system due to human-caused global warming.

CURWOOD: Now, how soon might we see this? This year, for example, we had this exceptionally cold and snowy winter in the eastern seaboard to the United States. To what extent might this recent winter - actually it's not quite over, is it? - be related to maybe this slowing down of the North Atlantic conveyor belt?

MANN: Well, that's a great example of the cutting edge of the science. We're still trying to find the answers, figure out the answers to some of these questions. Some scientists think that these unusually severe winters we've seen in the northeastern US, these very strong Nor’easters, these huge snowfalls, could actually be related to another climate change impact, the loss of sea ice from the Arctic, and the way that is altering large-scale weather patterns. 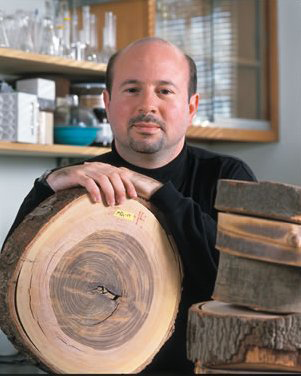 But this slowdown in the conveyor belt circulation would also be impacting regional climates, potentially in such a way as to yield more severe cold winters in parts of eastern North America, but we can't rule that out either. We're still trying to figure out the answers to some of these questions, but the problem is that the uncertainty in this case - and you sometimes hear critics will say, "well, uncertainty is a reason not to act on climate change, we're not certain about what will happen" - well, actually, uncertainty is a reason why we should act, because this is yet another reminder of a nasty surprise that may in store in the greenhouse. If we see an abrupt change in this ocean current system, it could create problems that are even greater than we currently project.

CURWOOD: So maybe the loss of Arctic sea ice has changed where the jet stream goes and that has brought some of the cold weather east. And maybe this slow down, or slowing down of the Gulf Stream, the North Atlantic conveyor belt, might be another reason why things are getting colder in the east. I mean, it sounds like a bunch of things are going wrong all at once, or am I just being too negative here?

MANN: Well, you're right. It's the law of unintended consequences here. We are toying with what Wally Broker used to refer to as the "angry beast.” We're poking it with sticks, and that is not something that you want to be doing. The fact that we don't understand this system completely is a reason for even greater caution because it means we could be in for unforeseen consequences – so called climate surprises. Now, there is some good news here. I don't want to leave your listeners with nothing but pessimism.

MANN: We are not yet committed to what we might envision as truly catastrophic climate change. Most climate scientists who study climate change impacts will tell you that if we can hold warming below to about two degrees centigrade, that's about three and a half degrees Fahrenheit, we would avoid some of the most disastrous impacts, and we might avoid a full blown collapse of this ocean circulation pattern. There is still time to act and we see some reason for optimism - there was a flat lining in global carbon emissions over the last year even while economic activity increased globally, some suggestion that maybe we're starting to turn the corner of decarbonizing our economy. There's a very important summit coming up later this year in Paris where many are hopeful that we will reach binding commitments to reduce carbon emissions even further. So there's some reason for optimism, but there is no question there is an urgency to acting on this problem now unlike anything we have ever witnessed before and our study is just another reminder of that.

CURWOOD: Michael Mann is Distinguished Professor and Director of the Earth System Science Center at Penn State University. He's also author of "The Hockey Stick and the Climate Wars: Dispatches from the Front Lines.” Thanks for taking the time with us today, Professor.

MANN: It was a pleasure.