In this week’s trip beyond the headlines, Peter Dykstra discusses Japan’s refusal to eat twhale meat contaminated by toxic chemicals that bio-accumulate in the ocean food chain with host Steve Curwood as well as more evidence of the governor of Florida’s alleged antipathy to climate change-related words, and President Obama’s ill-timed confidence in the safety of oil rigs.

CURWOOD: Time for a trip beyond the headlines now. Peter Dykstra’s been investigating, and he’s on the line from Conyers Georgia. Peter is with the DailyClimate.org and Environmental Health News, that’s EHN.org. Well Peter, what’s going on?

DYKSTRA: Well, hi, Steve. Let’s start out with a screwy little story from the high seas. Commercial whaling has been outlawed worldwide for over three decades. Some native communities are allowed to hunt whales on a subsistence basis and as part of cultural tradition, and most people, including myself, have no problem with that, but Japan’s commercial whaling industry has dodged the ban by claiming their whaling, and importing whale meat from Norway or Iceland, is for scientific research.

CURWOOD: Yeah, that’s been around forever, but it’s not exactly clear what kind of “research”, if any, comes out of it.

DYKSTRA: Well, unless you want to count the fact that some people are still making the scientific discovery that they think whale meat is delicious. But I digress. Recently, two groups, the Environmental Investigation Agency and the Animal Welfare Institute, uncovered documents showing that Japan rejected imports of whale meat from Norway due to pesticide contamination — chemicals linked to birth defects and cancer like aldrin, dieldrin, and chlordane.

CURWOOD: So it’s not just mercury, but also farm chemicals that are showing up in ocean animals?

DYKSTRA: Yes, and that’s something that’s been showing up with alarming frequency, particularly in the northern latitudes. Polar bears, seals, walruses and more – animals near the top of the food chain – can be the last stop for toxic chemicals as they bio-accumulate their way up that food chain. Not a happy story but a fascinating one in several ways. Where years of international laws and international scorn haven’t finished off commercial whaling, the discovery that some whale meat is unfit for consumption might do the trick. Secondly, it’s a powerful lesson that toxic chemicals – even if they’re used thousands of miles away and have been banned for years – have far-reaching impacts. And one more point, for which we’ll have to sound the irony alert.

DYKSTRA: After 30 years of the sham of research whaling, some genuine scientific research – checking food for contamination – may help stick the fork in commercial whaling.

CURWOOD: Huh, saving whales by poisoning them. Kinda weird science indeed. What’s your next one this week?

DYKSTRA: Silenced science and climate comedy. Here’s an update on a story we discussed a couple of weeks ago. Florida Governor Rick Scott denies that there’s a state government ban on saying the words “global warming” or “climate change,” despite a staff attorney, a contract employee, and a scientist coming forward and saying there was an unwritten ban. This week, two more shoes dropped.

CURWOOD: Hmmm, let’s see – one, two – that would be like five shoes in total.

DYKSTRA: Well, five shoes, for now. Number four was a state environmental manager who filed a complaint saying he was formally reprimanded and sent home from work for bringing up climate change at a state meeting in February. Bart Bibler’s complaint also says he was directed to seek out his doctor to see if he was fit to do his job.

CURWOOD: Oh, my. So if his complaint is true, they’re saying that he was potentially crazy for mentioning climate change? 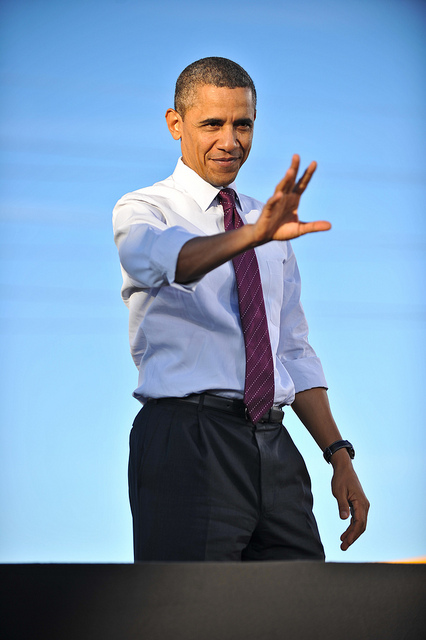 DYKSTRA: Which may be why the state’s Emergency Management Director figuratively buttoned his lips rather than say “climate change” at a state hearing. A Democratic state senator tries to get Bryan Koon to say those forbidden words, as bi-partisan hilarity breaks out among his Senate colleagues. There’s a link to this hilarious video on the LOE website.

CURWOOD: That’s LOE.org. You know, I just wish the rest of the climate news was always that funny. Hey, Peter, give us our weekly history lesson now, please.

DYKSTRA: One of the things you’ve got to love about broadcasting is that when you record someone’s words, you can hold them accountable. Forever. President Nixon said, “I am not a crook.” The first President Bush said, “Read my lips.” President Clinton when he wagged his finger at America and said “I did not . . . have . . . yada yada yada.” But one of my favorites from President Obama came out five years ago this week, and I bet he wishes he could reel this one back.

[CLIP OF OBAMA SPEAKING] “It turns out, by the way, that oil rigs today generally don’t cause spills. They are technologically very advanced.”

CURWOOD: Well, it wasn’t such a big deal when he said it.

DYKSTRA: But three weeks after he said it, the Deepwater Horizon Spill became the biggest disaster in American offshore history. Eleven men died when an oil rig exploded, leading to an ecological disaster for the Gulf of Mexico and an economic one for the seafood and tourism industries along the Gulf. The fifth anniversary of the explosion and spill will come next month. President Obama’s confident words about oilrigs were related to opening up more offshore territory for oil and gas drilling. That effort was put on hold, but from the Arctic to the Atlantic coast, there’s pushback lately to expand drilling off our coastlines.

CURWOOD: And you can get all of our words, audio, the podcast, on our website, LOE.org. Peter Dykstra is with Environmental Health News – that’s EHN.org – and DailyClimate.org. Thanks Peter, for taking the time with us.

DYKSTRA: All right, Steve, thanks a lot, we’ll talk to you soon.