The Place Where You Live: East Claridon, Ohio 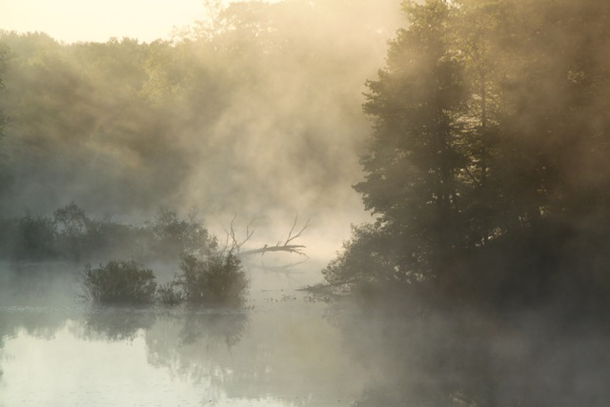 Living on Earth is giving a voice to Orion magazine’s longtime feature where people write about their favorite places. In this week’s edition, Anne Kelsey takes us to East Claridon, Ohio, where her family has owned land for 100 years and the morning quiet on the pond seems sacred.

CURWOOD: From Wisconsin to Ohio now, for another installment in the occasional Living on Earth “Orion Magazine” series, “The Place Where You Live.” Orion invites readers to submit essays to the magazine’s website and put their homes on a map, and we give some of them a voice.

[MUSIC: Edward Sharpe and the Magnetic Zeros, “Home,” Up From Below, Community Music 2010]

KELSEY: My name is Anne Kelsey. I live in St Louis, Missouri. I wrote my essay about our family place in East Claridon, Ohio. We've had it for almost 100 years. My grandfather bought it a long time ago, and it was used as a summer place until my parents built a house on it. We've had a lot of family events there — weddings, birthdays, anniversaries. My father died there. It's wooded. It's got a large pond, about a 35-acre pond in it, and a lot of wildlife. And then, about 15, 20 years ago maybe, I got this tiny little kayak, and I started going out on the water. It's quite magical and some of the residents of the pond are probably as old as I am. There's some huge snapping turtles that are quite scary when they go underneath the kayak. They look like dinosaurs. In my kayak, I learned how to be extremely silent. It's really become a form of prayer, where I'm just aware of the fullness and beauty of creation. 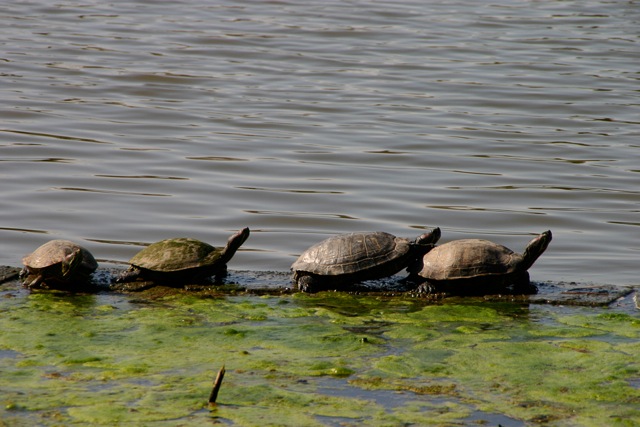 Turtles sun themselves on an old plank in the pond. (Photo: by Anne Kelsey)

This is my essay about East Claridon, Ohio.

The night sky softens to a deep calm grey before the first blush of dawn turns robust and the moon fades to a transparency. From the branches of a hemlock a black-capped chickadee drops two clear descending notes, as confident as the first violin of an orchestra.

A wood thrush sends out a flute-like whistle.

A cardinal and then a robin follow, then the air is filled with an assortment of cheeps, trills, chirps, clacks, fillips, screeches, twitters and whistles. 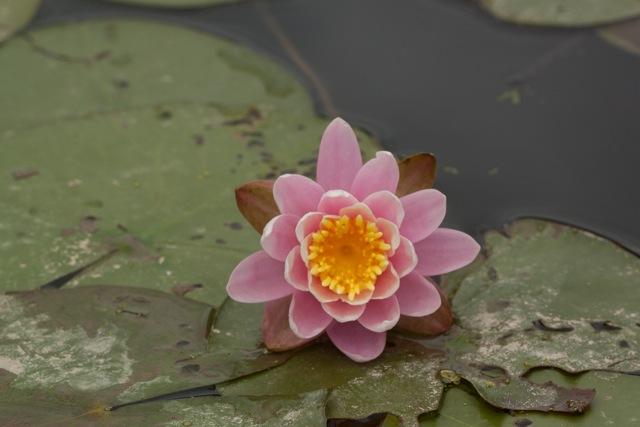 Even to an untrained ear unable to match the call to the bird, they sound different, one from another. Each note encourages another, and one by one, the winged residents of pond and woodland take up an invitation to sing a lively morning cantata.

Cow lilies raise sturdy fists of yellow buds above the water. A small flock of Canada geese takes to the air, rising hard and fast . . .

. . . calling furiously to each other above the rounded contours of the pond, where an old snapping turtle rests in the mud. Water spills over an old brick dam and provides background music, always changing its tune. On the hottest days of August, after weeks without rain, it becomes a whisper. 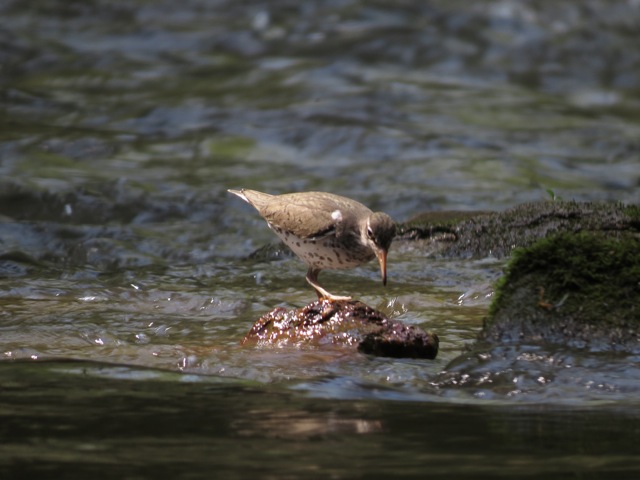 A beaver swims from its humped, muddy house, in search of new green leaves.  A raccoon picks her way along the shore, in the deep shadows of pine and beech. As the light brightens and the air warms, a couple of turtles line up on a fallen log. Pink and white water lilies begin to open. Another morning comes to Blue Heron Farm.

It isn’t really a farm at all. It’s family land we’ve hung onto for almost a hundred years, and now the only harvests are memories and love of the land. As miles go, I live far away, but at night, when I can’t sleep, I imagine waking up to the sight of a blue heron gliding across the pond and morning birdsong. In my heart and imagination, this is my real home.

[MUSIC: Kaki King, “Night After Sidewalk,” Everybody Loves You, Velour 2003]

KELSEY: As I said, my grandfather bought it, and now it's part of my mother's estate and I have four younger sisters, so there are five of us with all kinds of different financial needs and emotional attachments to the place and so, unless I win the lottery, we do have to sell it. It will be a huge grief when it finally passes from our hands, although we don't own the land. We are just stewards of the land, we are caretakers, so I just hope that it will pass onto someone who understands land in the same way. 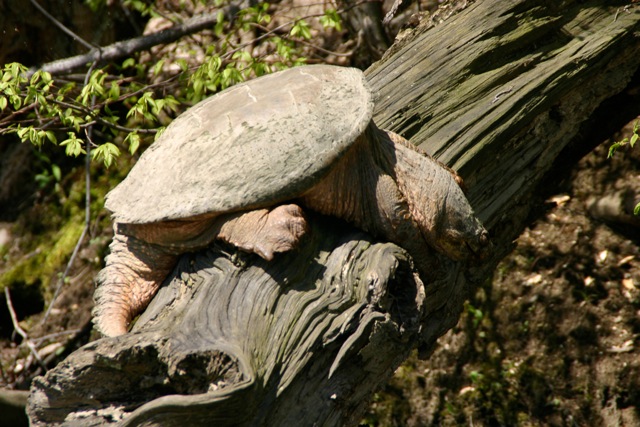 Snapping Turtle on a branch. (Photo: courtesy of Anne Kelsey)

CURWOOD: That’s Anne Kelsey and her essay about her holiday home in Ohio, and you can tell us about “The Place Where You Live,” if you like. There’s more about “Orion Magazine” and how to submit your essay at LOE.org.

Listen to more The Place Where You Live essays