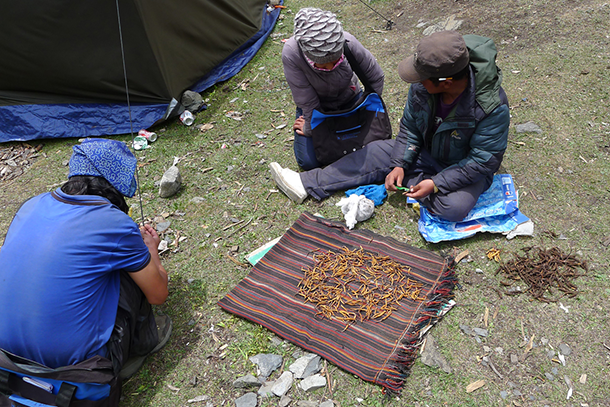 A Tibetan fungus is being sold on the Chinese medicine market as an aphrodisiac, bringing new income and problems to rural villages on the Tibetan plateau. Anthropologist Geoff Childs tells host Steve Curwood that he’s found one village that is managing the resource sustainably.

CURWOOD: Among the many resources of Tibet is a fungus that Chinese medicine prizes as an aphrodisiac. It’s been the target of collectors and speculators, and the source of conflicts and even some deaths up in the fragile Himalayan grasslands. But one community in the highlands of Nepal has found a way to manage the harvest sustainably using cultural traditions, laws and consensus. Geoff Childs is an anthropologist at Washington University in St. Louis, who wrote in the journal Himalaya about the fungus – called yartsa gunbu. 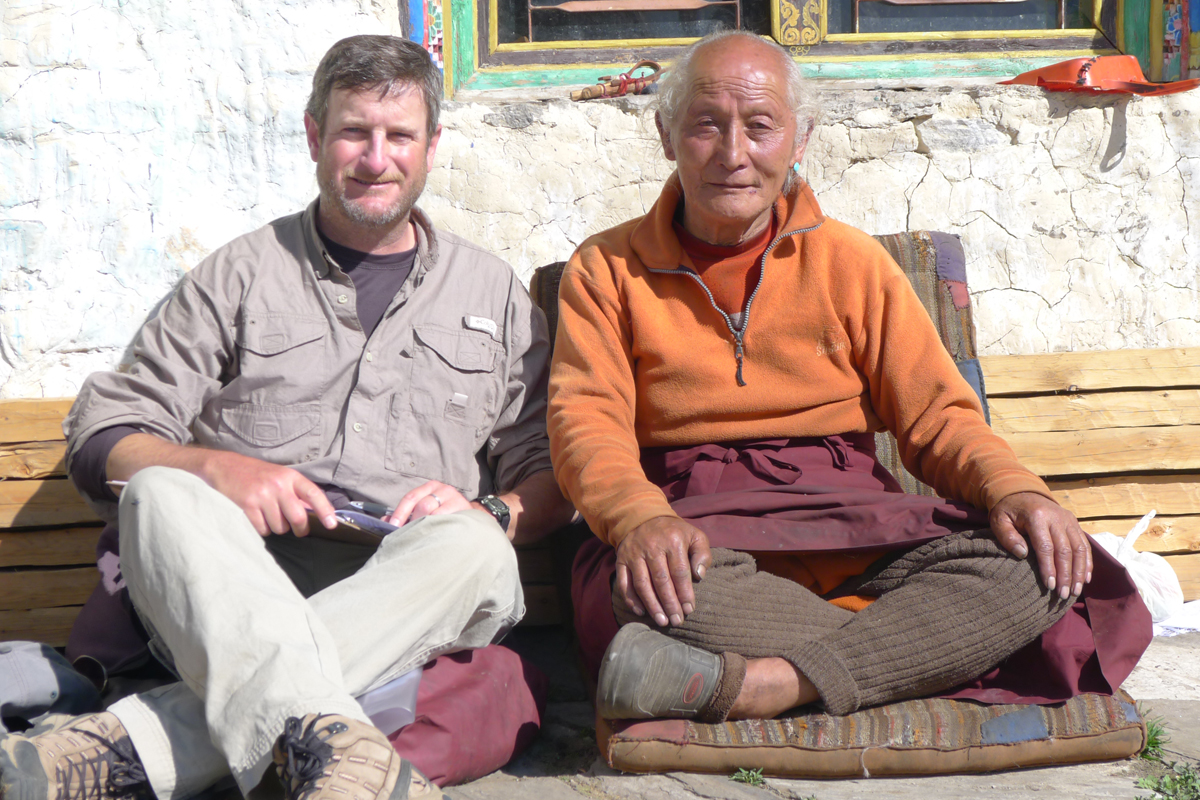 CHILDS: Yartsa Gunbu in Tibetan means “summer grass winter worm”. It's actually a caterpillar of the ghost moth, which becomes infected by a fungus, and in the springtime, the fungus shoots a stoma out of the ground, which allows people to locate it in highland pastures. Generally it grows at 12,000 feet and above, and it's become very popular in Chinese herbal medicine for health, longevity, to boost the immune system. It's considered to be a libido enhancement, which is why some people like to call it the Himalayan Viagra.

CHILDS: It's extremely popular in China now to the point where in many rural areas on the Tibetan Plateau, gathering it has become the primary source of income for rural dwellers, so people are basically suspending all other activities in the months of picking which generally come starting in late May and run through June. And the whole family moves up to the high pastures to gather it, so that it can be sold to middlemen who take it to China and that's where the market really takes off.

CURWOOD: So in general how has it been harvested in recent years?

CHILDS: People will basically crawl along the ground looking for it and when they find it they'll carefully dig it out with the spade or some digging implement and remove it from the soil because you want it intact: You want the caterpillar body and the fungal stoma as well. That's where it's got the value. If it's broken apart it doesn't have the same value so they dig it out very carefully and, you know, a good day somebody can maybe find 20 to 30 of these. Some people are adept and can find 100 or more.

CURWOOD: Wow. And each one of these is worth quite a bit. 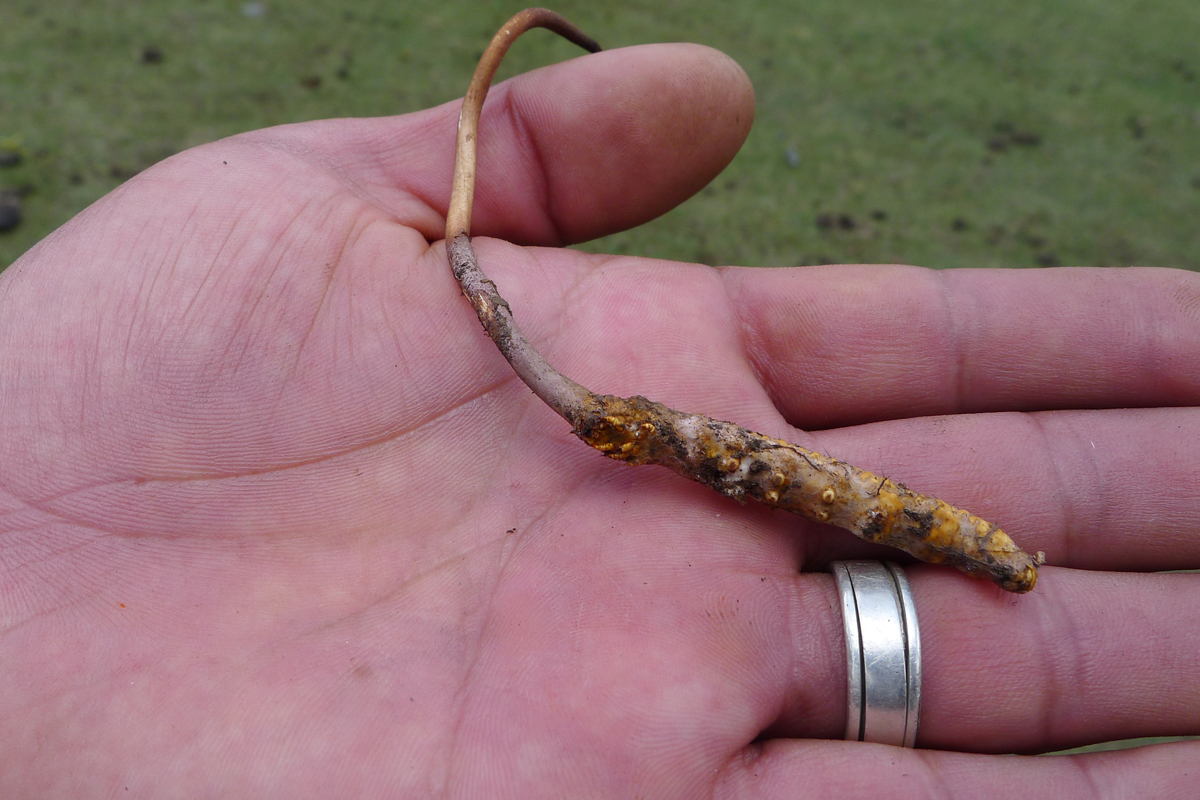 CHILDS: Yeah. Each one has gotten from middlemen about 500 rupees. If it's really good, maybe 750 rupees. So $5 to $7.50, which, in a place where there is very little income earning opportunities, that's a lot of money.

CURWOOD: What are the environmental impacts of all this harvesting? I mean, all these people running around the hillsides there in the mountainous Himalayas, some of that's pretty fragile stuff.

CHILDS: Yes, that's certainly going to have an impact, and especially in those areas were they allow a lot of people to gather. Number one, you're going to have people chopping down the juniper for fuelwood because they have to cook their food and keep warm, so there's going to be an environmental impact there. There is also a lot more people digging up the turf, which is fragile high-altitude alpine turf, so that we'll certainly have an impact.

CURWOOD: Now, you did much of your research in this small Tibetan area called Nubri and you say that they are doing things differently there. How so? 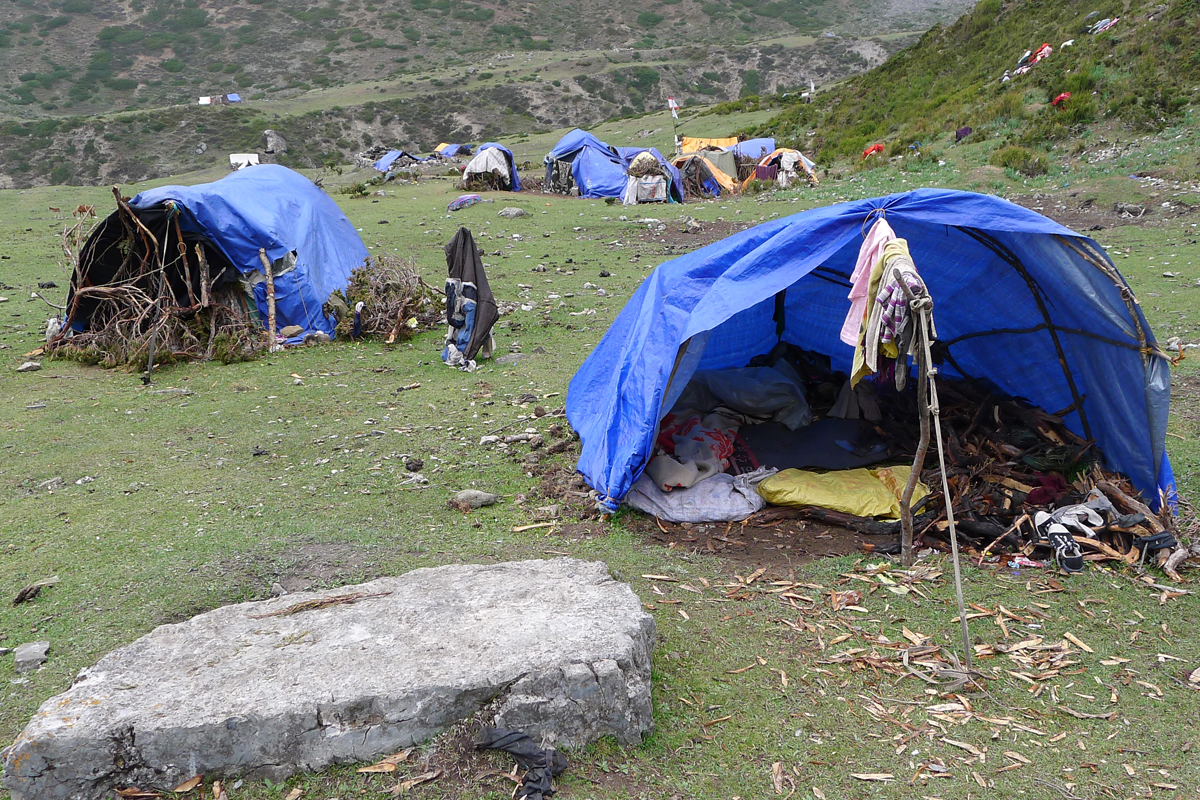 CHILDS: Yes, correct. Nubri is a valley in Gurkha district in the country of Nepal. The residents are ethnically Tibetan. They've been living there for about 700 or 800 years, so it's an indigenous population of Nepal. What they have done in contrast to other areas is they've limited the number of collectors to only residents of the villages, and so that keeps the number of collectors way down.

CURWOOD: Tell me how the community of Nubri got its regulations put in place.

CHILDS: What they've arrived at in Nubri is a combination of what they call “yultim” which we could translate as village regulations, secular regulations, and “chutim” which are religious regulations. On the religious side, there's a long tradition of protecting the landscape through these ceiling decrees. It's called a “shukya”. What they will do is, they will decree certain areas off-limits to human exploitation, and usually that's a sacred grove of trees, a certain slope of a mountain that a deity inhabits or something like that.

In terms of the village regulations the first one that I just mentioned is the exclusion of all outsiders. The second one is they've got a designated starting date, and they arrive at that by looking at the snow melt, looking at the conditions in the alpine pasture and figuring out what's going to be the likely time when it's best to gather it. And so for a couple weeks prior to the official starting date, every adult in the village has to check in four times daily to the village meetinghouse to prove that you're not collecting early. A third thing that they do is they tax it. For the first member of your household, the tax is very low; it's 100 rupees or approximately $1 dollar. For every additional household member, it's 4,500 rupees, so about $50 dollars, and they gather that tax and use it for communal purposes.

CURWOOD: So, how has Yartsa Gunbu harvest changed the economics of Nubri? 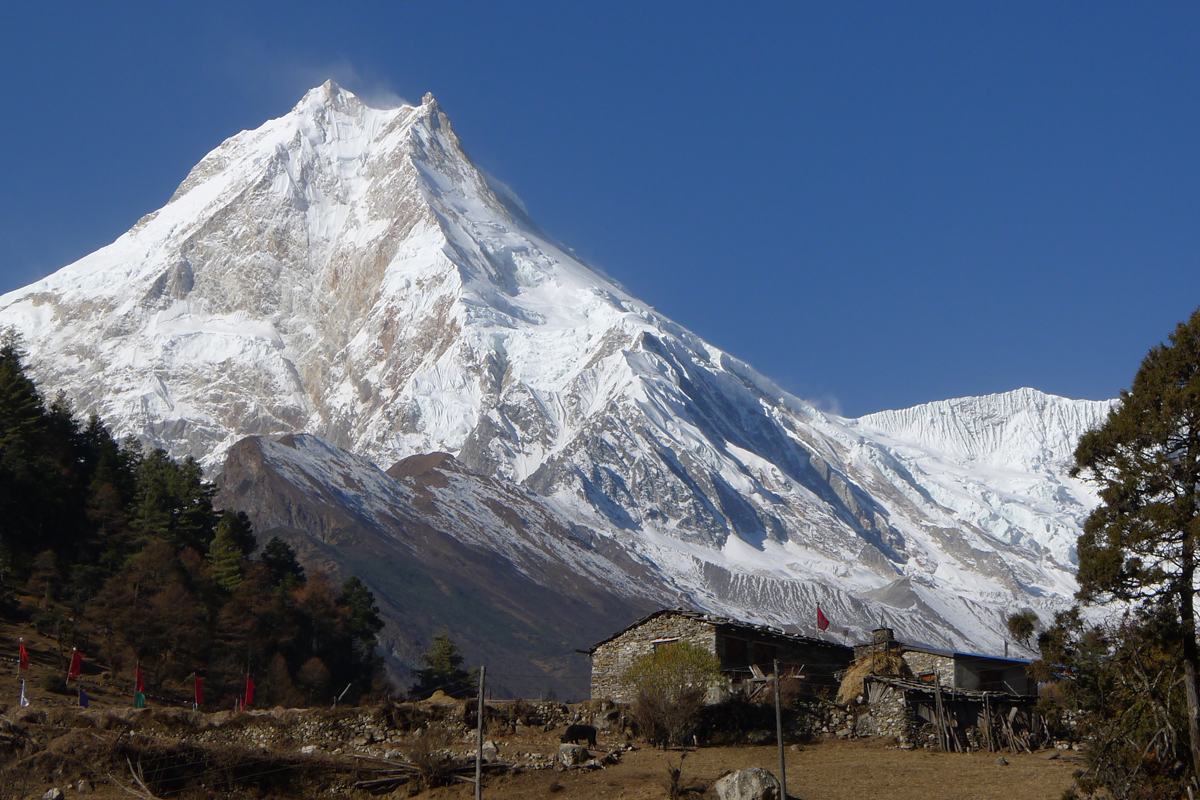 Mt. Manaslu (26,759ft.) in Nubri is the 8th highest mountain in the world. (Photo: Courtesy of Geoff Childs)

CHILDS: It's changed it tremendously. There's positives, and there's negatives. The positives are people suddenly have money that they can use for their children's education; a lot of people are using it to send their children to boarding schools. They can improve their housing. I've seen a lot of improvements in local housing, upgrading the conditions of their housing. They can buy food with it. They don't produce enough food locally; they’ve had to trade various products in the past to get enough food. Now they've got cash to purchase food. On the negative side, you can imagine that people who have never had this type of income, when they suddenly come into money, it can cause a lot of social problems, so gambling and drinking are way up. There's also friction within families. Younger members tend to take the income and go to the city and blow it all really quickly, whereas the older members want to conserve it and use it in a way that benefits the family. So it has certainly improved their livelihood and their standard of living, but of course it does come at a cost.

CURWOOD: So Jeff, looking at this from a broader resource management perspective, what are some lessons that we can take away from what's happening in Nubri? 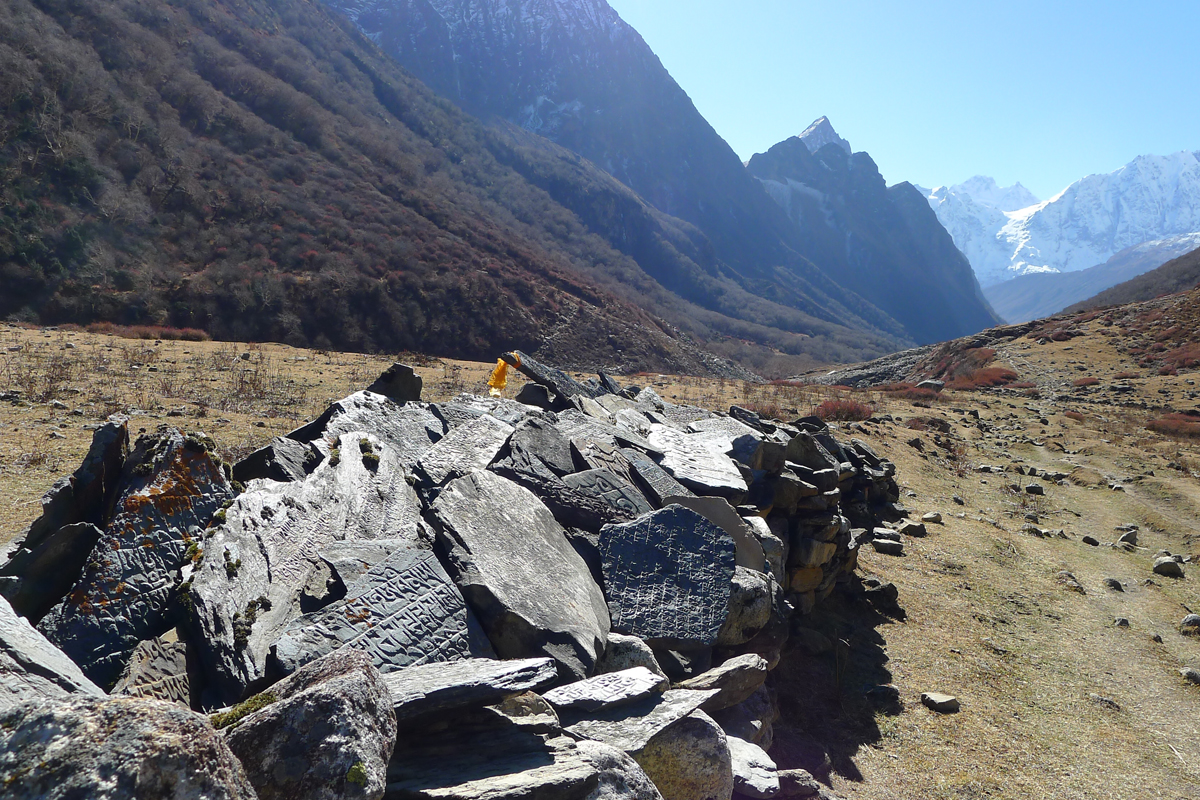 CHILDS: Trust indigenous people. Don't immediately assume that as outsiders with more education we can come in and devise a system that will work for them. I think, first of all, study what's in place. Study with an open mind and move from there.

CURWOOD: Jeff Childs is an Anthropology Professor at Washington University in St. Louis. Thanks so much for taking the time with me today Professor.

CHILDS: Thank you for talking with me. It's been a pleasure, Steve.


Child’s paper on sustainable harvesting and management of Yartsa Gunbu

Geoff Childs is an Associate Professor of Anthropology with Washington University in St. Louis