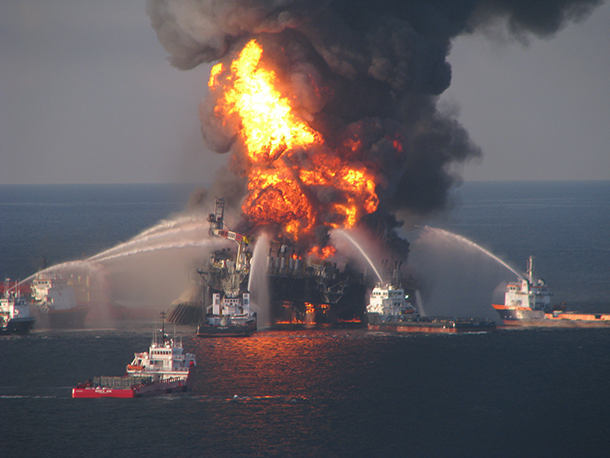 Five years ago, the Deepwater Horizon oil disaster caused billions of dollars in economic and environmental damages for the Gulf region. Civil and criminal lawsuits have kept BP in court for years, but an agreement might soon bring relief for those government agencies seeking fines and compensation. Mark Schleifstein, environment reporter for NOLA.com/Times-Picayune, tells host Steve Curwood about BP’s proposed settlement and why the smaller-than-expected sum is still a win for government plaintiffs.

CURWOOD: Legal issues are also central to the settlement recently announced between BP and the federal government, the states of Louisiana, Texas, Mississippi, Alabama and Florida and some localities over the catastrophic oil well blowout in the Gulf of Mexico in 2010. In exchange for $18.7 billion dollars, portions of which will not be delivered for as many as 18 years, the government agencies agreed to halt their litigation efforts against the giant oil company. So these plaintiffs get cash sooner, and BP won’t pay as much as they could be liable for under the Clean Water Act. Private suits will still continue, and the trial judge has already declared BP “grossly negligent” in the disaster that left much of the Gulf of Mexico polluted with crude oil and oil dispersants. Mark Schleifstein is a reporter with NOLA.com/the Times Picayune, and joins us now. Welcome to Living on Earth.

SCHLEIFSTEIN: Well, thank you. Appreciate it.

CURWOOD: What is the breakdown of this $18.7 billion? Who will receive, how much, and when? 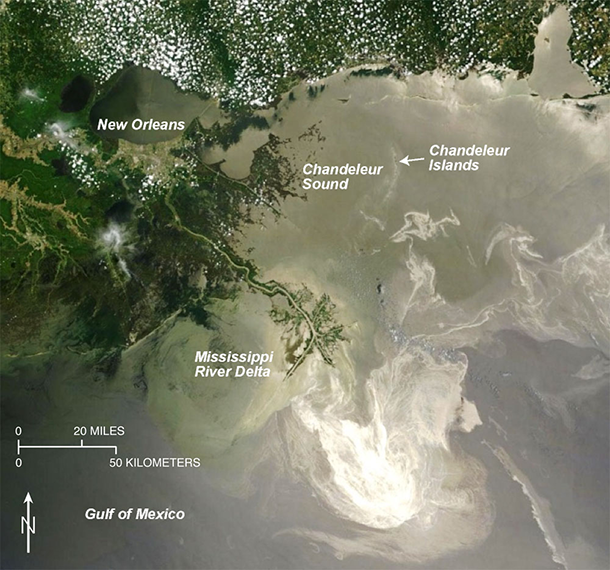 SCHLEIFSTEIN: Well, you've got several pots of money that are involved here. BP’s going to be a paying $5.5 billion in Clean Water Act civil penalties over a 15-year period. And 80 percent of that will go into the Restore Act Trust Fund. Now the Restore Act requires that 80 percent to be used on restoration projects aimed at restoring the damage done by the oil spill along the Gulf Coast in the Deepwater Gulf of Mexico, so a big chunk of that money will go to individual states and also to federal agencies for specific projects.

The second pot is also aimed at restoration and that's about $7.1 billion that will go to the US and the five gulf states over 15 years for natural resource damages under the Oil Pollution Act, and BP had already put up $1 billion so that's an additional $7.1 billion, that billion dollars already is being spent on a variety of different projects in the five states, and a portion of that money can also be used to compensate for lost opportunities, for fishing and boating and other things, so a portion of that money might be able to be used for projects that are more aimed at recreation.

SCHLEIFSTEIN: Right. There's another $4.9 billion that will be distributed over 18 years to settle economic and other claims by the five Gulf coast states, and then another billion dollars to resolve claims by more than 400 local governmental entities and that includes in Louisiana parishes and other states, counties, but also cities and school boards, things like that, largely for lost tax revenue that occurred during the time of the spill.

CURWOOD: The judge had found BPA guilty of gross negligence and some had calculated the fines would be much higher, at least on the Clean Water side of this. Why were the plaintiffs willing to settle for this overall almost $19 million package? 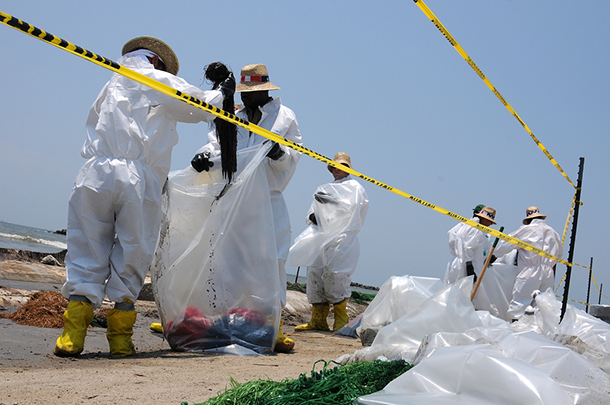 In Louisiana, a Health Safety and Environment (HSE) worker collects pieces of an oiled snare boom so it can be disposed of safely on May 29, 2010. Hundreds of HSE workers contracted by BP—and under the direction of the U.S. Coast Guard—are cleaning up oil from the Deepwater Horizon/BP oil spill, which began washing up on beaches here one month after the drilling rig exploded and sank. (Photo: US Coast Guard, Petty Officer 3rd Class Patrick Kelley, Flickr CC BY-ND 2.0)

SCHLEIFSTEIN: It largely has to do with the fact that this was going to be a rather lengthy court proceeding. Even after the judge ruled it was likely based on what BP was already doing in the private claims settlement that the company was going to appeal any sort of decision and that could've delayed payments for years if not even a decade.

CURWOOD: Like the Exxon Valdez case, for example, I think there’s money still to be paid under that case.

SCHLEIFSTEIN: Well, that's true. Now the Exxon Valdez part of the problem was that some of the damage wasn't recognized until after the initial settlement was made, and there's actually a provision in this for about $230 million to be saved until the end of the first 15 years for potential natural resource damages that might occur after that.

CURWOOD: What about the natural resource damage assessment? I know that a number of scientists, and states and of course, BP itself as well, conducted studies regarding the extent of the damage? How does the number that the researchers found play into this $18.7 billion dollar settlement?

SCHLEIFSTEIN: One of the problems here is that we don't have the formal settlement agreement to see exactly how that part of the agreement plays out. What we know is it a number of peer-reviewed scientific reports that have been published in scientific journals over the last five years, and the estimates for that have been all over the place. Some estimates were as much as another $30 billion and under this process it's my understanding that that report will eventually be written, but it will now be written within the confines of the financial dollars that are included in the settlement.

CURWOOD: So do a little math for me please, Mark, how much money has BP paid already for cleaning up this spill and the fines and with this proposed settlement, what will this all total to?

SCHLEIFSTEIN: I think the last time that they put out an estimate they said they had already set aside about $42 billion to pay for things including the initial response and recovery efforts that were already underway, so this is another $18 billion on top of that. Total amount, we're looking at getting close to $60 billion.

CURWOOD: This settlement has to be approved by the judge and I gather he'll have some hearings before he approves or rejects it. What's the sense, what the judge will do with this agreement at this point?

SCHLEIFSTEIN: I think he's going to listen, but I think he's also very interested in getting this portion of the legal battle over, so I think he's expected to pretty much put his imprimatur on it.

CURWOOD: What are some of the strongest complaints about this proposed settlement? 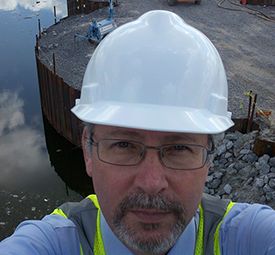 SCHLEIFSTEIN: Well, the biggest one obviously is that it's not enough money. We've already seen Oceana, which concludes that its constituency is the Deepwater Gulf of Mexico, the wildlife and fisheries. They contend that the natural resource damage assessment dollars should've been closer to $30 billion and that the Clean Water Act fine should've been at the maximum amount at least if not more. So that's a significant difference between what the settlement is. And again, of course, the parties to the settlement contend that this speeds the process up and removes delays that could be years.

CURWOOD: Mark Schleifstein is a Pulitzer prize-winning reporter with Nola.com/the Times Picayune. Thanks so much for taking the time with us today, Mark.

SCHLEIFSTEIN: Well, thank you I appreciate it.


“BP Deal Will Lead to a Cleaner Gulf”

“Deepwater Horizon Oil Spill: An Interactive Look at What Happened”

Unrelated spill claims made against BP after the spill