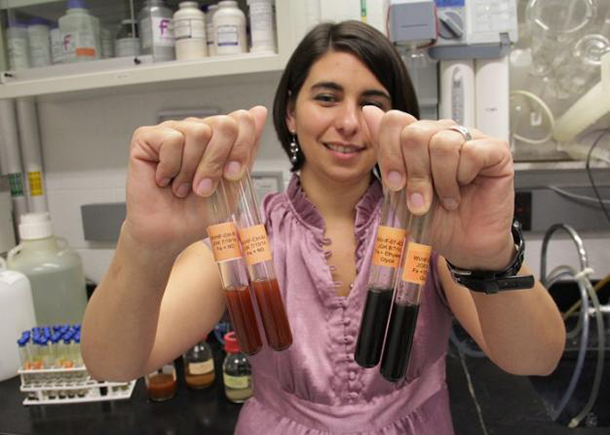 U.S. Geological Survey researcher Denise Akob holds vials filled with iron minerals. The vial on the right contains sediment from a stream contaminated with oil and gas waste, and has turned black because of bacterial reactions with the sediment. (Photo: Reid R. Frazier)

Frackwater contains many toxic elements and chemicals that contaminate groundwater, if it spills. The Allegheny Front’s Reid Frazier reports that when this wastewater from fracking spills, microbes start to clean it up, but the process can release arsenic, which also pollutes groundwater.

CURWOOD: It's Living on Earth. I'm Steve Curwood. Earlier this year, the US Geological Service detailed what exactly it found in wastewater left over from fracking natural gas and oil.
Treating and disposing of the huge amounts of noxious wastewater that result from frack wells depends on a proper analysis of the water, and a few months ago, Reid Frazier of the public radio program the Allegheny Front checked in on the scientists hard at work to figure this out.

FRAZIER: Denise Akob is a microbiologist for the US Geological Survey. In a USGS lab outside of Washington, DC, she holds up a glass jar filled with water. At the bottom of the jar is what looks like sand.

FRAZIER: The sediment is from a clean streambed. It’s been inside the bottle for 90 days. Akob holds up a second bottle. This one’s not so clear. Inside of it is sand from a stream in West Virginia that was polluted by a leaking oil and gas wastewater impoundment.

AKOB: You actually can’t even see through the bottle.

FRAZIER: An orange goo coats the sides of the second bottle. The goo is iron oxide--rust. It’s the result of a chemical reaction between microbes in the sediment and contamination in the streambed. The experiment is part of a research project at the USGS to determine the risk posed by fracking wastewater. The oil and gas industry produces billions of gallons of this waste every year. It’s the briny liquid that comes out of a well after it’s been hydraulically fractured with millions of gallons of water. The waste is tainted with chemicals from fracking fluid, and has toxic levels of metals and salts from underground formations.

COZZARELLI: One of the main things we’re trying to do on this project is identify what the important potential pathways to the environment are.

FRAZIER: Isabelle Cozzarelli is a geochemist leading the team of USGS researchers. 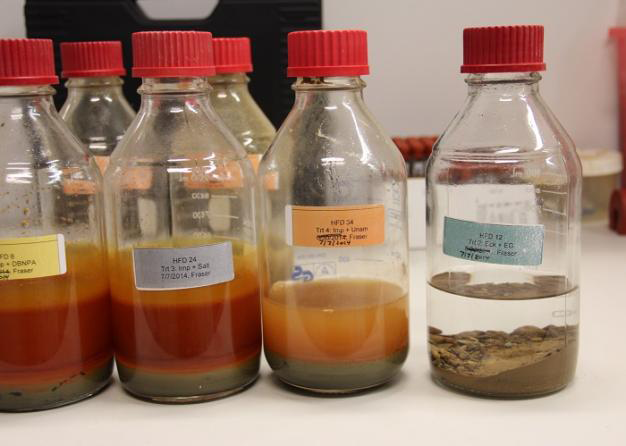 Sediment from a stream impacted by fracking wastewater develop orange residues after 90 days, while sediment from a clean stream did not. (Photo: Reid R. Frazier)

FRAZIER: In North Dakota, a million gallons spilled from a pipeline break and killed a swath of vegetation along its two-mile path.

Cozzarelli’s team is looking closely at one question - what happens when tiny organisms in the soil come in contact with frackwater. These bugs are like the Earth’s gut bacteria.

COZZARELLI: I guess you could call it the microbial flora, right?

FRAZIER: So they’re studying the everyday behaviors of these microorganisms.

COZZARELLI: And, so they have to do two things, right? They need food and they need to breathe.

FRAZIER: And some bacteria eat crude oil and chemicals found in oil and gas waste. So if some it spills on the ground, it’s like an all you can eat buffet for bacteria. That seems like good news right? The bugs can eat the contamination. But there is a catch. These bugs need to breathe, too. And they need to breathe more when they’re given a large new food source, like a frackwater spill. But underground, there is very little oxygen. Cozzarelli’s group says the bacteria they study evolved to thrive in this inhospitable environment.

COZZARELLI: And if you’re a human, you die, right? [LAUGHS] But if you’re a cool microorganism, you can breathe the nitrate or the iron or the sulfate because you’ve adapted to be able to do that.

FRAZIER: That’s right. These bacteria don’t need oxygen to breathe. They can even breathe in metals, like iron. Here’s where the problem starts though. The more food they get from a spill, the more iron they breathe. Iron minerals found in soil are a frequent host for another element - arsenic, a known human carcinogen. When a bacteria breathes that iron in, the arsenic is released, and becomes water-soluble.

COZZARELLI: And you can get more arsenic released into groundwater.

FRAZIER: That's what it appears happened at an oil spill site in Minnesota. Arsenic levels in the groundwater there are 20 times above the EPA limit for drinking water, though no one is actually drinking that water. So will bacteria help or hurt groundwater quality when frackwater gets on the ground? Cozzarelli says they’re just beginning to answer these questions.

COZZARELLI: I kind of feel like we’re trying to catch up. The industry’s just gone so quick.

FRAZIER: All this science could help in states where frackwater spills occur. In Pennsylvania, oil and gas companies have drilled 8,000 wells in the Marcellus shale. And state records show that spills or leaks of fracking waste are common. The mapping website FracTracker analyzed violations records from the state’s Department of Environmental Protection. It found 53 recorded spills of fracking wastewater in 2014; that's more than one a week. Many of these are small, only a few gallons, but some are not.

FRAZIER: In Washington County, in southwestern Pennsylvania, trucks removed contaminated soil from a hillside that used to house a wastewater pond. The John Day impoundment was ordered closed this year after the company that owns it, Range Resources, discovered high salt levels in the soil beneath its liner. The DEP found Range had leaks at several of its waste ponds in the area. In September, the company agreed to pay a record $4.15 million fine for these discharges.

FRAZIER: Range said in a statement it was disappointed by the violations, but said safety features at its new impoundments would go above and beyond DEP requirements. The DEP’s Scott Perry said the size of the fine reflects how seriously the state is taking the issue.

PERRY: Management of wastewater from oil and gas development is, in my opinion, the most critical environmental issue associated with the activity. Perry said the state is beefing up its rules on impoundments, which could include mandating two liners below each waste pit. That’s welcome news for residents like Janice Dumont. She lives next to one of the leaky impoundments, this one in Cecil Township, just south of Pittsburgh.

At her house, contractors are putting on new siding. The upgrades came courtesy of money Dumont and her husband received from Range Resources for a gas lease on their land. But word of a potential leak at the impoundment nearby has caused her to worry about groundwater. 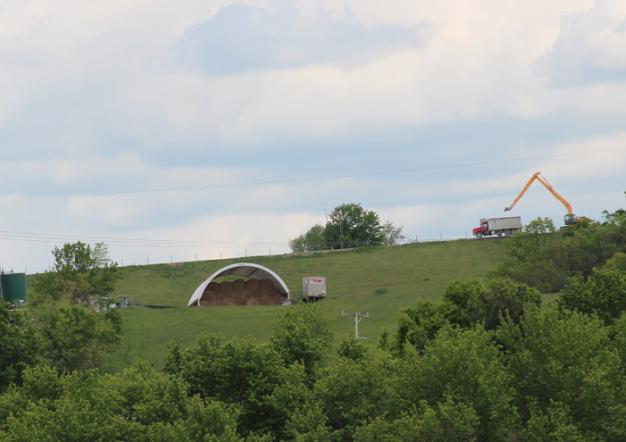 DUMONT: Range tested it, the DEP tested it, and there was no impact from the fracking pond.

FRAZIER: To see the leaky impoundment, all Dumont needs to take a ride on a cart.

DUMONT: [LAUGHS] I got this for my 40th anniversary. It’s called a gator, a John Deere Gator.

FRAZIER: At the top of a steep hill, on the left, she points out the waste pit, which has been taken out of production. It’s cut into a hillside.

DUMONT: That was such beautiful farmland before...I guess it will be again...looks like a strip mine.

FRAZIER: A steep ravine separates her hill from the impoundment. She says a DEP inspector told her the ravine might act as barrier between pollution from the waste pond and her groundwater.

DUMONT: We were just fortunate, I think. We were lucky that we didn’t have any problems, because our well water is so good. I mean it’s delicious, it’s cold, and there’s no water bills.

FRAZIER: Range Resources will keep testing the groundwater, and will remove the impoundment by next year. Dumont says she won’t miss it. I'm Reid Frazier.

Our story on iron-eating bacteria

In North Dakota, a million gallons of brine spilled from a wastewater pipeline break earlier this year and killed a swath of vegetation along its 2-mile path.

Arsenic levels in an aquifer near Bemidji, Minnesota are 20 times above the EPA limit for drinking water, thanks to microorganisms’ chemical reactions.

In Pennsylvania, oil and gas companies have drilled more than 8,500 wells in the Marcellus shale.

FracTracker analyzed oil and gas violations records from the DEP and found 214 recorded spills in 2014; 53 were for oil and gas wastewater.

Range’s statement concerning the violations and its new impoundments

The DEP is also attempting to fine The EQT Corporation $4.5 million for leaks at a 6-million gallon wastewater impoundment in northern Pennsylvania.

EQT is challenging the fine, calling it “exorbitant.”