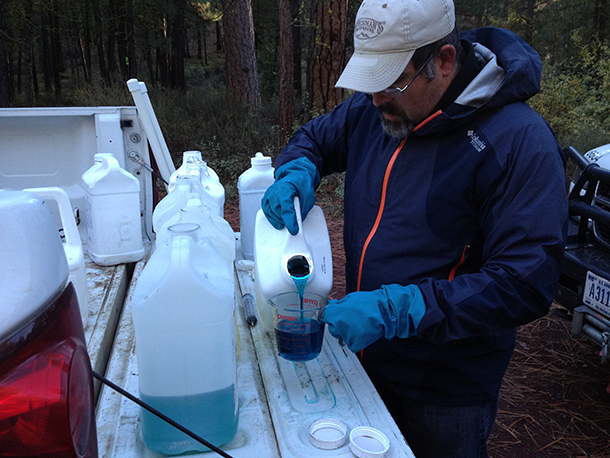 Mike Crumrine adds dye to an herbicide mixture so that he can see where he applies it. Crumrine is applying herbicides to an invasive plant, ribbon grass that is choking Oregon's Metolius River. (Photo: Courtesy of Maret Pajutee)

Ribbon Grass growing along Oregon’s Metolius River is attractive, but the invasive plant has edged out acres of native sedges and wildflowers. EarthFix’s Courtney Flatt reports how locals and state groups are pulling out and poisoning the weed to protect the river’s ecosystem.

CURWOOD: Now, from restoring a plant associated with water...to ripping one out! You’ve probably seen ribbon grass. It’s a pretty, leafy plant, and Better Homes and Gardens calls the variegated kind “a perfect plant for adding a dose of color anywhere you don't want to maintain; it's a fast-spreading variety perfect for covering slopes.” But “perfect for covering slopes” makes it something of an invasive nuisance in the Northwest, where it’s choking one of Oregon’s most pristine waterways. Courtney Flatt from the public media collaborative EarthFix has the story. 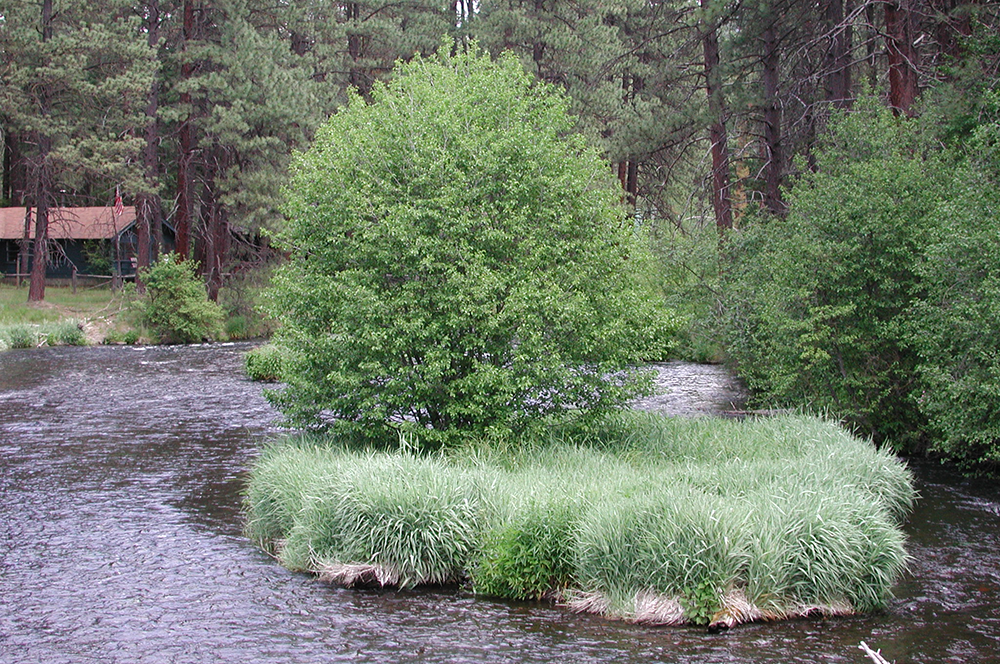 FLATT: Looking at the banks of the Metolius River in central Oregon, nothing really seems wrong. But train your eye a little, and you start noticing large patches, even entire islands, covered in thin, green grass. Merit Pajutee’s a forest service ecologist.

PAJUTEE: Aldo Leopold said that living with an ecological consciousness is like living in a world of wounds.

FLATT: The wound on the Metolius River is ribbon grass. Its bunches of leaves have squeezed out native sedges and wildflowers. As the wildflowers disappeared, the number of pollinating insects dropped. Pajutee says rumor has it ribbon grass came to Oregon in the 50s, when someone planted the pretty grass in a flowerbed. Then, like most invasive plants, it kept growing. 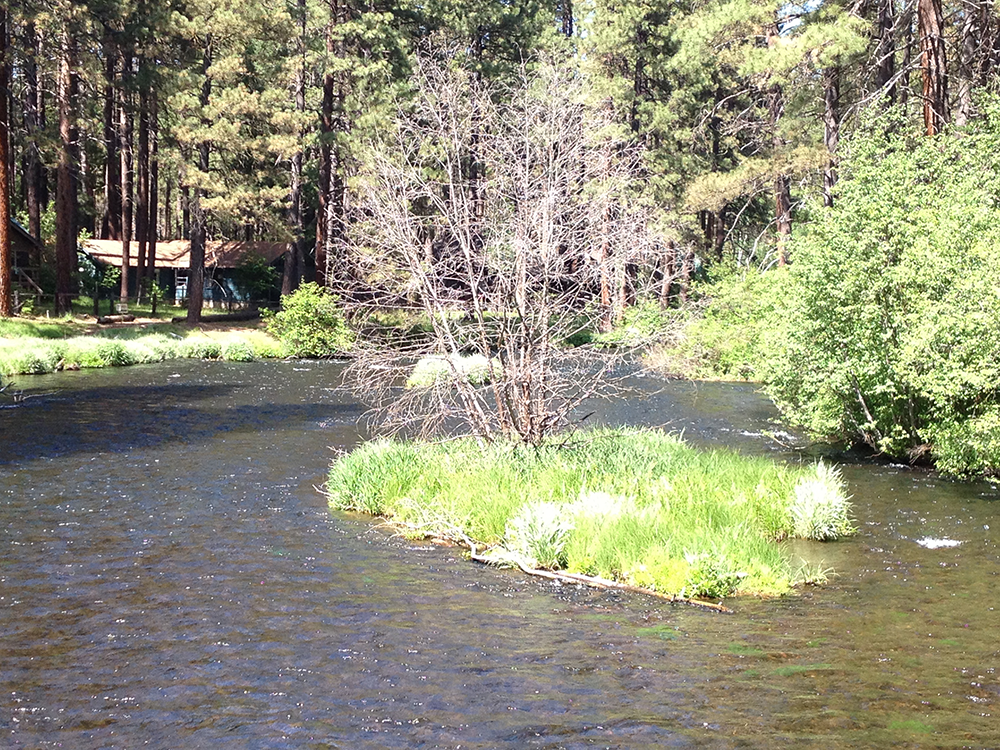 The same island after treatment. Friends of the Metolius covered the island with a black tarp, hoping that less sunlight would kill the ribbon grass. They left the tarp on for three years. It killed the ribbon grass, but also killed other plants on the island. (Photo: Courtesy of Maret Pajutee)

PAJUTEE: And I think the reason it has done so well here is the character of the Metolius, and its spring-fed nature. It really found the perfect home, where it can spread.

FLATT: Ribbon grass is found throughout the Northwest. It’s relatively contained, but here on the Metolius it’s growing like crazy.

The Metolius is a wild and scenic river. It’s home to Oregon’s healthiest bull trout population and recovering salmon sockeye runs. One of the big concerns is that ribbon grass doesn’t provide a lot of cover for fish to hide in the winter. That’s why this year the Oregon legislature listed ribbon grass as an official noxious weed. 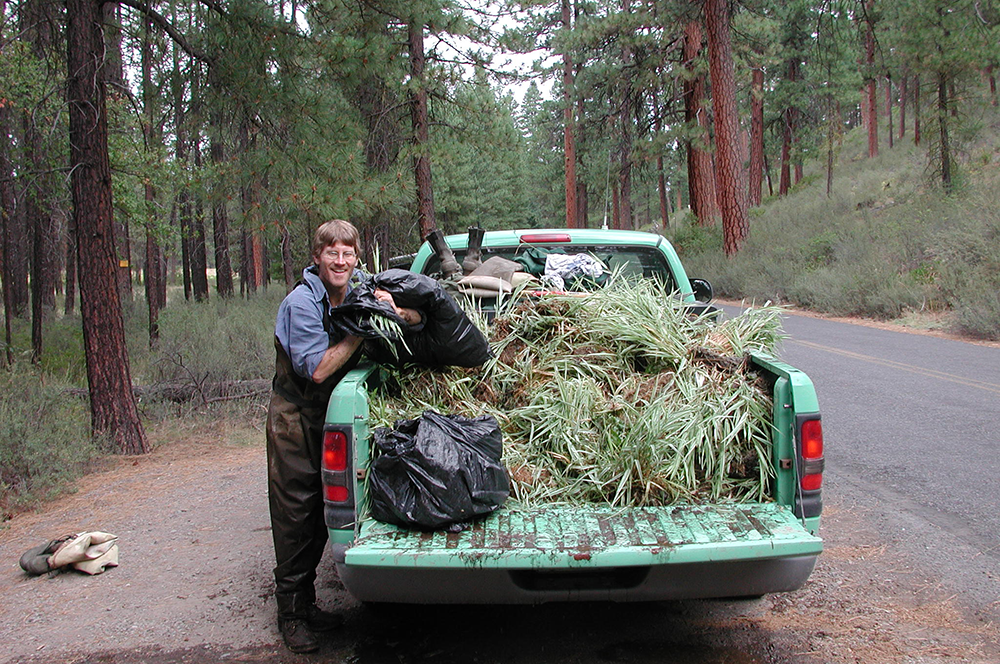 FLATT: Crews filled an entire pickup truck with weeds. They took the ribbon grass to a gravel pit and covered it with a tarp to kill it. A couple years later, the ribbon grass started growing back.

Now, they’re trying herbicides. Mike Crumrine is with the Oregon Department of Agriculture. He wades through the frigid waters.

CRUMRINE: Wiping the herbicide on with, in essence, a sponge. Rubbing the plant, every bit of the plant that you can get to that’s above water level, is the target goal.

FLATT: There’s a small window every fall when Crumrine can apply the herbicide. 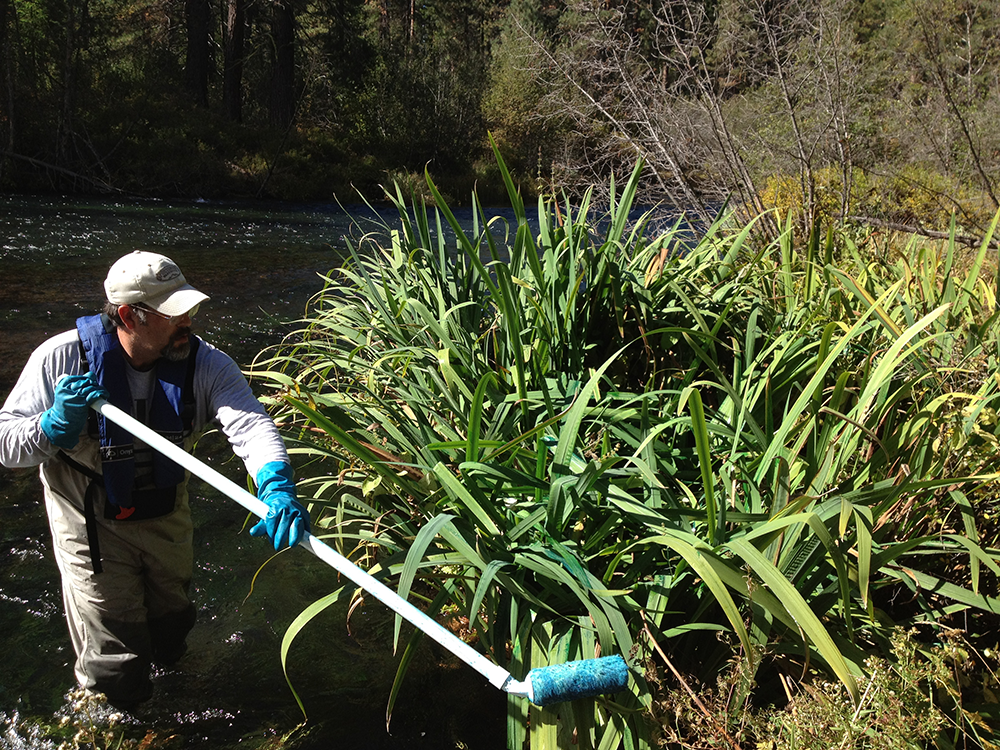 REPORTER: So do you think you’ll ever be able to knock it all out?

FLATT: Water quality tests have shown the herbicides haven’t hurt fish or other species in the river. And the herbicides are working. There are finally a few places where native plants have started to come back.


Read more about ribbon grass and management of the species on EarthFix.