Endangered Porpoise Caught in the Web of Illegal Fishing 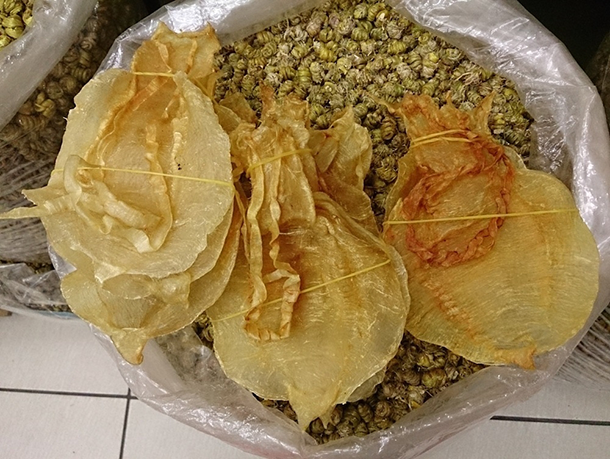 The vaquita (Spanish for little cow) is the world’s smallest whale and also the most endangered. Duke University marine biologist Andy Read tells Living on Earth’s Emmett Fitzgerald how the poaching of a protected fish for the Asian medicine trade could drive the Mexican porpoise closer to extinction.

CURWOOD: The Gulf of California is one of the world’s most productive and diverse fishing regions. Thousands of families in Mexico and the US depend on the more than 900 fish, invertebrate and whale species that call these waters home. While the Gulf of California supports over 70 percent of Mexico’s fishing industry it also plays host to many endangered marine species. But Mexico has a history of lax fishing regulation enforcement, and now overfishing of one endangered fish is driving the world’s smallest porpoise, the vaquita, toward extinction.

Andy Read is a professor of marine biology at Duke University and a member of the International Committee for the Recovery of the Vaquita and the IUCN cetacean specialist group, and he explained the situation to Living on Earth’s Emmett FitzGerald.

FITZGERALD: So first off, tell us a little bit about this porpoise. What is that the vaquita?

READ: Well, it's one of the six species of porpoises. It's the smallest porpoise and thus us the smallest whale. It reaches only a length of about four or five feet. It's found exclusively in the Upper Gulf of California completely in Mexican waters and it's also the most endangered whale population of certainly less than a hundred individuals left now and we're very concerned about its status.

FITZGERALD: Yes, so tell me about that. What are those primary threats to the vaquita?

READ: The vaquita lives in an area that is intensively fished by Mexican fishermen three villages in the Upper Gulf of California, so for a long time it's being caught accidentally in nets set for shrimp or other fish. And this has driven the population from the size of something around 500 about 20 years ago to every small population, less than a hundred today. Exacerbating that decline recently has been entanglement in nets that have been set illegally for another endangered species. This is an endangered species of fish called the totoaba, a large croaker or sea bass and the bladders from that fish are taken, then dried, then smuggled from Mexico sometimes through the United States to China where they are used in traditional medicine.

FITZGERALD: So basically the commercial take of one endangered fish species is not only harming that species, but driving another porpoise to extension as well? 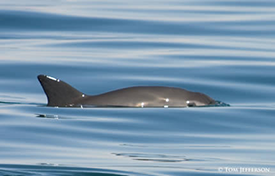 FITZGERALD: So tell me a little bit about the totoaba. What's the incentive to harvest these fish illegally?

READ: Right, they're very large fish, they're a little bigger than the vaquitas actually, about two meters long, six feet long and they're a Croaker, and so they produce sound by circulating against the swim bladders. So their swim bladders are pretty big, and fisherman can receive up to about $8,500 per kilo - dried totoaba swim bladder, so there's an enormous incentive for fishermen to set nets illegally for these totoaba. And for reasons that we don't completely understand, vaquitas seem in particular to be vulnerable to entanglement, the nets that are set for these large croakers. So a fisherman who might catch four or five totoaba in his net might also catch one of the last vaquitas as well, and we're worried that that accidental mortality that bycatch of vaquitas is what's going to drive them to extinction.

FITZGERALD: Yeah, and it's hard in thinking from the perspective of a fisherman in Mexico, it's hard to blame the individual fisherman for making a decision like that when there is so much money to be made. From your perspective how do you handle the fact that this is a logical economic choice for fishermen in Mexico?

READ: It's a very difficult question. I think we need to help the Mexican authorities ensure that fishing can be done on a sustainable basis in the Upper Gulf, and fishing totoaba the way they've been prosecuted now is just not going to be sustainable over the long-term. The fish stock itself can't sustain the level of mortality that it's experiencing, so we need to help those communities develop sustainable fisheries so that they can continue to live and make a living from the Upper gulf, and that's fishing in different ways, fishing species that can sustain the fishing pressure that will provide for those communities.

FITZGERALD: What protections and regulations are in place in Mexico to help stop the illegal take of the totoaba and thus the vaquita bycatch as well?

READ: Well, I have to say the government of Mexico has really stepped up to try and protect the vaquita. Earlier this decade they established a vaquita refuge in which gillnet fishing was banned so that the vaquita would've been safe in there had there not been not been illegal fishing for the totoaba. And earlier this year President Peña Nieto announced a two-year program in which all gillnet fishing would be banned from the Upper Gulf of California. And that's an expensive program. There's more than $30 million compensation going to fishing families and fishing industries in the Upper Gulf so that some of the illegal side of things. Illegal fishing really just requires enforcement and so when the president of Mexico went to San Felipe in April to announce the program he also brought with them several new patrol boats that the Mexican Navy is using to try and combat this little fishing. But it's a large area with a lot of fishermen and it's difficult to eliminate a fishery like that especially one that is so lucrative. So we are very concerned that enforcement efforts won't be sufficient and that vaquitas will continue to die in nets set for totoaba. 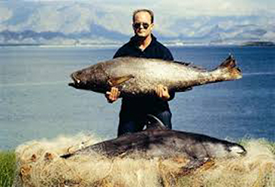 READ: Well, the United States is doing several things. First of all, scientists from the National Marine Fisheries Service are working with their colleagues in Mexico to assess the status of the vaquita. There will be a survey conducted later this year jointly from researchers in Mexico and the US government. The US is also working to try and intercept illegal shipments of totoaba bladders from Mexico to China. There have been several cases recently in which totoaba bladders have been seized, so folks at the border are doing what they can to try and stem the flow, but again, it's very difficult to eliminate that, and as long as there's a path from Mexico to China somehow, there will be an incentive to set their nets illegally in the Upper Gulf.

FITZGERALD: What can be done in terms of the fishing gear itself to try to reduce bycatch of these endangered species like the vaquita?

READ: Yeah, that's a good question. So the government of Mexico together with several NGOs, environmental NGOs, have been working to develop more environmentally sustainable ways of fishing in the Upper Gulf. So most of the shrimp and the fish that are harvested there are caught with what we refer to as gillnets. These are long panels of nets that are just left in the water to entangle fish and shrimp. And so we've been trying to promote alternative ways to catch fish and shrimp that would not capture the vaquita, and those primarily are small trawls that are dragged behind the Pangas, the fishing boats that the fishermen use, and the vaquitas are able to avoid those nets so there's much less chance of a vaquita becoming killed in one of those nets than one of these entangling gill nets. 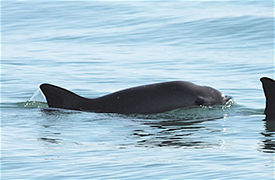 Scientists estimate that there are less than 100 vaquita left in the world. (Photo: Tom Jefferson via Instituto Nacional de Ecologia y Cambia Climatico)

FITZGERALD: And you think it's likely that that kind of technology can be rolled out across the fishing fleet?

READ: I think it's a big ask in the kind of two years that we have in the program that Mexico's announced so far, but it's not impossible. But again, even if we're successful doing that, if the illegal fishing for totoaba continues I think that will be enough to drive the species to extension regardless of what we do with all the legal fisheries in the area.

FITZGERALD: At this point how do you rate their chances for recovery to the vaquita?

READ: Good question. I refuse to give up. There was a sighting of a vaquita in the gulf earlier this year. I'm really interested to see what the survey encounters later this year. I try to be optimistic that enforcement efforts will be sufficient to stop the illegal fishing, but we really are at the last second to the last minute for the species. It's very dire.

FITZGERALD: Why do you think it's important to work to save a species like this? There are so many different dolphins and porpoises. What makes the vaquita unique or, in general, why is important to save particular species?

READ: Well, I think there are a couple reasons for the vaquita. First of all, it's Mexico's porpoise. It's not found anywhere else. It's an endemic to the Upper Gulf of California. So if we lose it, Mexico will never have another porpoise, and the people of Mexico will have lost part of their biodiversity in really what is a completely preventable manner. And then secondly, I think, you know, each time we lose a species - this'll be the second species of a dolphin we’ll have lost in 25 years - we lost the Baiji River dolphin in China really recently. It's just another piece of the biodiversity of the Earth that we're losing, and I think we need to fight against each loss species by species, population by population.