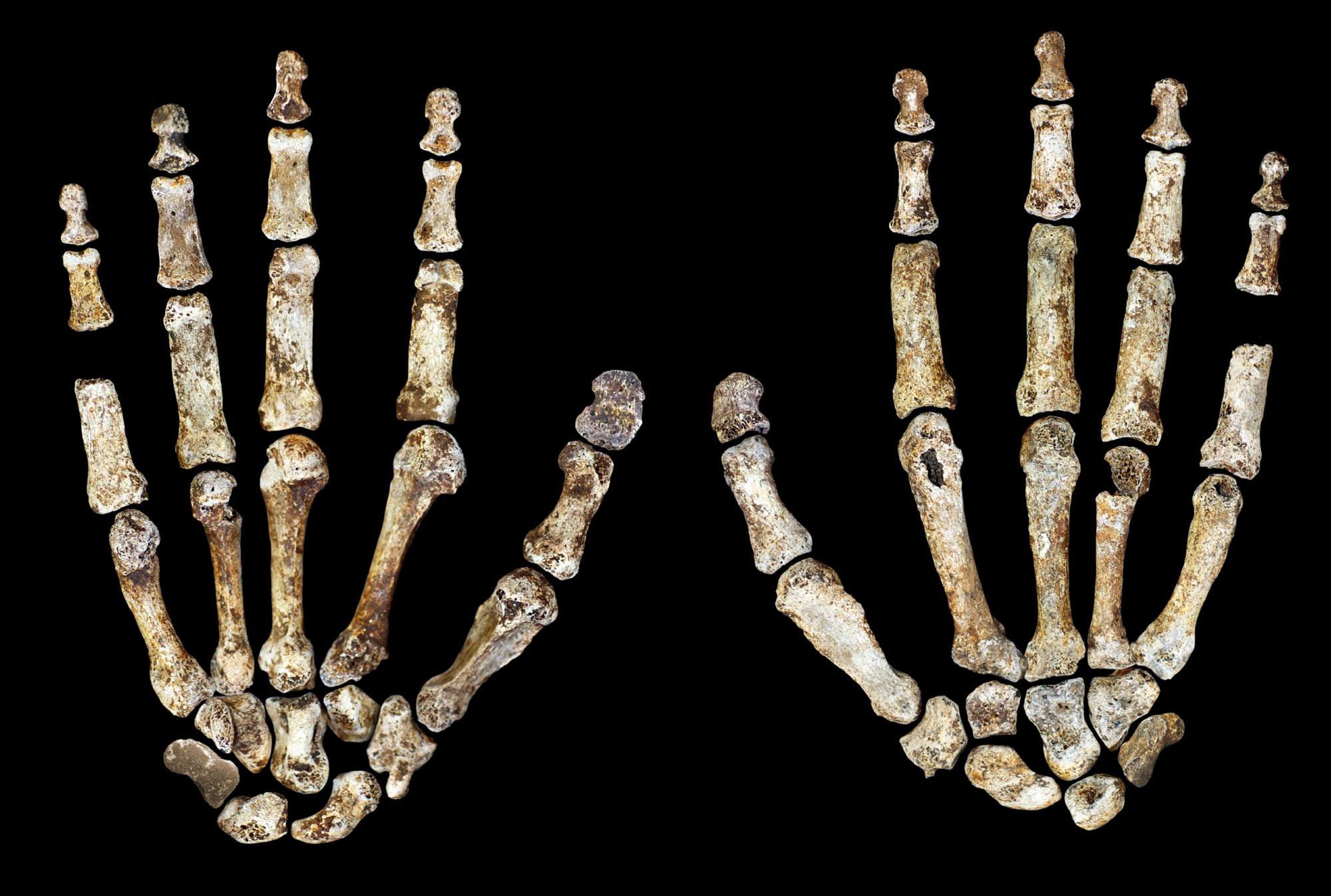 Homo naledi’s hands were curved more than modern humans’, indicating that they were good climbers. (Photo: Peter Schmid, CC BY)

Two years ago, paleoanthropologists climbed deep into South Africa’s Rising Star Cave system and found hundreds of skeletons of what scientists now believe is a new hominin species, called Homo naledi. Living on Earth’s Bobby Bascomb follows one of the spelunking scientists down into the cave’s entrance and hears about the fortuitous find by some of the excavation’s lead researchers, as well as the question of whether or not this species deliberately buried its dead.

CURWOOD: Now, there are many different species of nearly every type of animal living on earth today. Dozens of whale species, thousands of butterflies and frogs; yet there is only one type of living human. Of course, that wasn’t always the case. Once, there were several other members of the genus Homo -- Homo Erectus, Homo Habilis and Homo Neanderthalensis, for example. And now, paleo-anthropologists think they have discovered a new member of our genus deep in a cave in a part of South Africa aptly named the Cradle of Human Kind. Living on Earth’s Bobby Bascomb went to check out the site.

BASCOMB: It’s a cool overcast morning about an hour northwest of Johannesburg, South Africa. Post-doc researcher Marina Elliot leads the way past horses in a farmer’s field towards a small stand of trees.

ELLIOT: So just watch your head here, that’s quite low.

BASCOMB: She scrambles down a rocky path and emerges into a large cave. It doesn’t look like anything special -- hundreds of caves just like this dot the landscape here.

ELLIOT: You would really never know that this was something earth-shattering, but it definitely is. 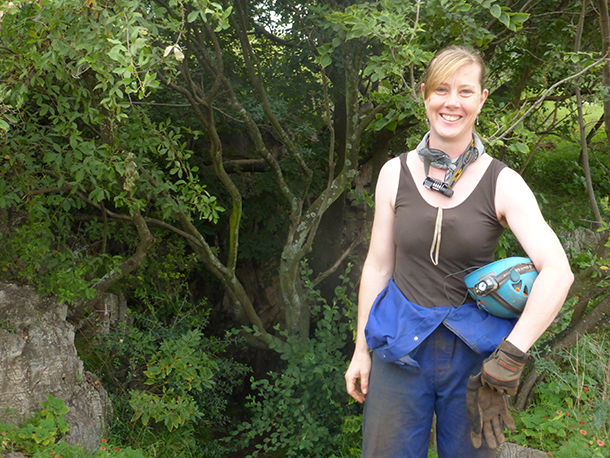 BASCOMB: The cave system is called Rising Star, and deep inside, researchers have discovered thousands of bones belonging to what appears to be a new species in our genus, Homo -- they’ve named it Homo naledi -- naledi means a star in the local Sotho language.

HAWKS: If you’re an anthropologist this is as good as it gets.

BASCOMB: John Hawks is an anthropology professor at the University of Wisconsin and one of the lead researchers for the excavation. He says the sheer number of fossils found here is unprecedented - over the course of 21 days the team unearthed more than 1500 individual bone fragments, more than had been found in the previous 90 years of exploration in Southern Africa. Hawks says they’ll be able to learn a lot about human evolution from the Homo naledi fossils.

HAWKS: We don’t really know how our ancestors developed before they were human; the reason is we just haven’t had fossils that represent the whole life span.

BASCOMB: But the Homo naledi find will change that. Scientists unearthed bones to represent nearly every part of the skeleton for every age group - infants to elders. What they found is a creature that’s strikingly similar to modern humans in some ways but extremely primitive in others. The brain was roughly a third the size of modern humans - the shoulders, chest, and pelvis were also very primitive. The hand was similar to ours but curved, an adaptation for climbing trees. But Lee Berger, the lead author of the study, says the feet of Homo naledi are extremely modern. 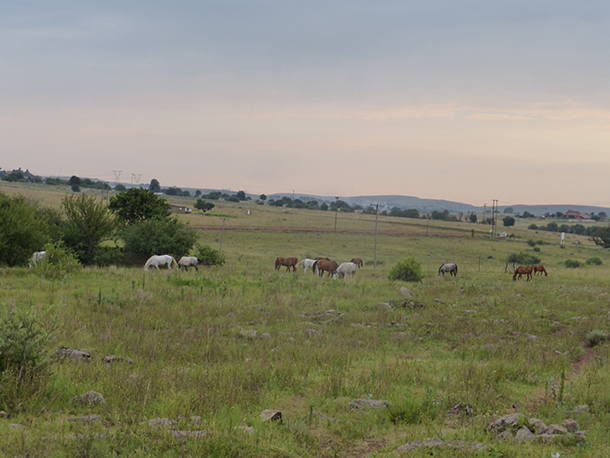 The field you walk through to reach the caves. (Photo: Bobby Bascomb)

BERGER: The feet are practically indistinguishable from a human’s. This is a walker.

BASCOMB: Berger is a research professor at the University of Witwatersrand and a National Geographic explorer in residence. While he was working on a hominin species called Australopithecus sediba, that he discovered just a few miles from the naledi bones, Berger commissioned local spelunkers to go out looking for more hominin fossils. On October 1st, at 9:00 at night they came knocking on his door and showed him photographs of a mandible and skull resting in loose soil - an unheard of find.

BERGER: To see these things lying on the surface with early hominin morphology was just staggering.

BASCOMB: Berger was so excited about the find and worried about its security that he couldn’t sleep that night. So at 2:00 in the morning he called Terry Garcia, then the head of exploration at National Geographic.

BERGER: I said, “Terry, if you’re ever going to believe in me, believe in me now.” He waited for a moment and then he said, “do what you need to do.” Which is explorer speak for you can have money.

BASCOMB: Berger’s next challenge was to find qualified scientists who could retrieve the fossils. The tall, skinny, cavers that initially found the bones described a tight squeeze through a gap just 7.5 inches wide and later a narrow chute where they had to lie on their stomachs and push themselves forward with their toes.

BERGER: I didn’t know how I was going reach out to find very tiny people with these extraordinary skills to work in the cave. So I did what my generation does. I turned to social media. I wrote an ad. I didn't tell them what they were doing, I just basically said that you needed to be skinny, not claustrophobic, and you had to be able to drop everything within 3 weeks and come for an undetermined amount of time to South Africa -- unpaid. Oh, and you had to have a phd or masters in paleoanthropology or related field. I thought there were maybe 3 people in the world with that.

BASCOMB: In just over a week Berger had 57 applicants, 80% of whom were young women. The 6 scientists he ultimately chose to wriggle through the tiny space were all petite women. And it’s partly because the cavern is so inaccessible that Berger is confident in advancing his most bold and potentially controversial hypothesis about Homo naledi.

BERGER: We think that this species of non-human animal deliberately disposed of its dead in that chamber. It implies a lot of things, it implies they recognized their own mortality. They recognized other self. They took some level of risk to move into the deep dark zone of a chamber to make sure that their dead were not touched by the external environment, in perpetuity. 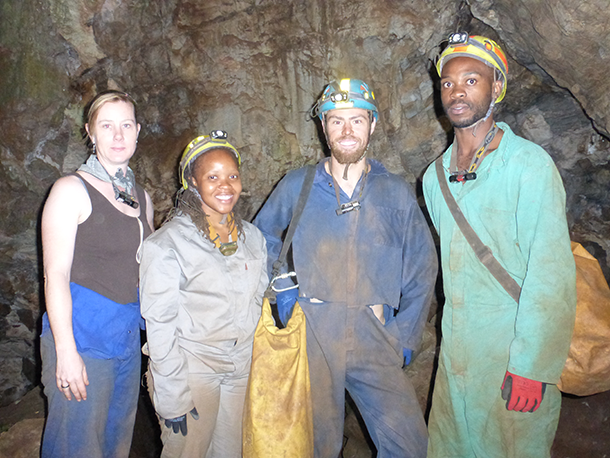 BASCOMB: Modern humans are the only creatures known to purposefully bury their dead, a custom that scientists believe arose between 60,000 and 80,000 years ago. Not all of Berger’s peers are ready to accept his theory of purposeful burial. William Jungers is chair of anatomical sciences at Stony Brook University. He says it’s possible there was once another, easier to access, entrance to the cavern and cautions against arguing for more meaning behind the final resting place of these hominins.

JUNGERS: If you were frequenting this cave or living near by and had a deceased relative starting to decompose you might want to dispose of it in some dark deep hole yourself to get away from it.

BASCOMB: Researchers say they have literally just scratched the surface of the Rising Star cave system. In 3 weeks they excavated an area roughly a foot deep, three feet square and they estimate there are thousands of bones yet to be removed. So, whatever the age and importance of Homo naledi turns out to be, paleoanthropologists will have plenty of work for years to come.


Study: Homo naledi, a new species of the genus Homo from the Dinaledi Chamber, South Africa