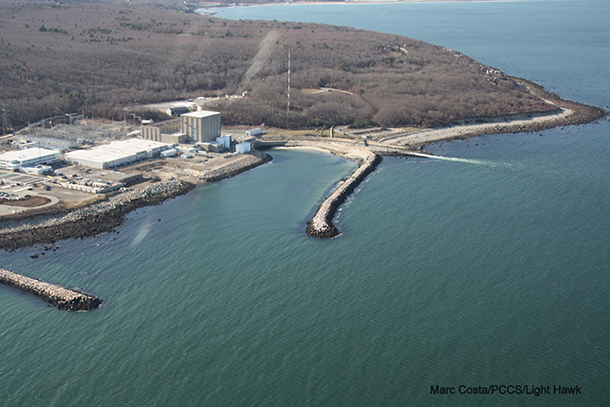 Pilgrim Nuclear Generating Station will be shut down by 2019, but activists remain concerned about the plant’s spent fuel. (Photo: courtesy of Meg Sheehan)

CURWOOD: It’s Living on Earth, I'm Steve Curwood. When the Nuclear Regulatory Commission found Pilgrim to be one of the three most dangerous nuclear power plants in the US, it was no surprise to some local residents as it has been the focus of protests for much of its 43-year history. Mary Lampert is the director of the citizen group Pilgrim Watch.

LAMPERT: My house is six miles across open water from the reactor. I can see it from my house, which is real motivation to get to work on the very serious issues that threaten our communities.

CURWOOD: Mary says that she and her fellow activists celebrated when they heard that Entergy had decided to close the plant, but their joy was short lived when they thought about the radioactive waste.

LAMPERT: The problem doesn’t go away. There’s no place to put that spent fuel. 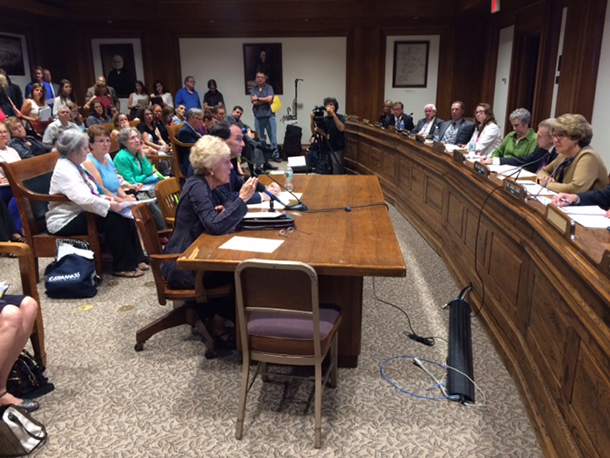 Mary Lampert, director of Pilgrim Watch, testifies before the Joint Committee on Public Health at the State House on July 28th.

CURWOOD: Mary and her fellow activists are asking that the spent fuel at the least be removed from the storage pool and placed into dry casks on site. She says it’s the best they can hope for.

LAMPERT: My granddaughter will be my age and it will still be sitting on the shores of Cape Cod Bay because no state wants to be a permanent repository.

CURWOOD: Meg Sheehan is a local lawyer. Her family has lived in Plymouth for generations; she has taken the plant to court over the impact that she argues the nuclear facility has had on the local environment.

SHEEHAN: The site where Pilgrim is located was a beautiful sandy beach with a seasonal beach cottage community. Many generations of families spent summers there and we locals loved swimming and fishing and boating there. There was a vibrant fishery, a seaweed industry that provided livelihood for many families. The shellfish and marine life has been destroyed by Pilgrim’s discharge of pollutants and cooling water into the bay.

Meg Sheehan speaks to the Town Board of Selectmen. (Photo: courtesy of Meg Sheehan)

SHEEHAN: I have had close friends die of cancer that is linked to Pilgrim by leading epidemiologists. In fact the state’s Department of Public Health report shows a 400 percent increase in the types of cancers linked to the of manmade radiation that Pilgrim emits. And those of us who have lived there and whose families have lived there for many generations know this and we have seen our friends suffer and die of those types of cancer.

CURWOOD: And Mary Lampert says she does not want to leave supervision of the shut down and decommissioning to the federal government, which has yet to solve the waste problem. She wants the state and local governments to step in and ensure that decommissioning goes smoothly and safely.

CURWOOD: Entergy Corporation says it has set aside nearly a billion dollars to decommission the plant and protect public health and safety.


Only nuclear plant in Massachusetts to close

Cape Downwinders Cooperative is another group concerned about the Pilgrim plant