The Changing Climate in the GOP Race 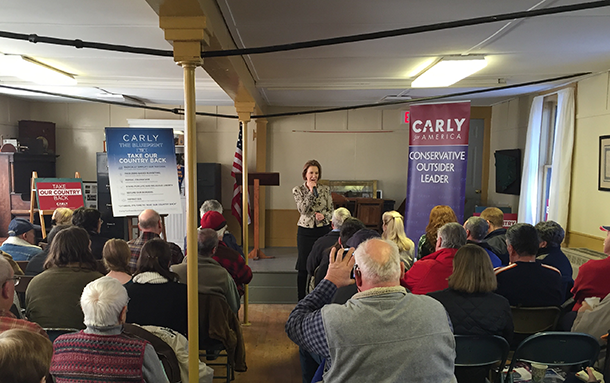 The partisan divide on the issue of global warming challenges Republican presidential candidates. Many GOP primary voters tend to be conservatives who are wary of climate action, but surveys show a majority of voters expected in the general election favor government action to protect the climate. Host Steve Curwood discusses the GOP field with The Atlantic's associate editor Clare Foran.

CURWOOD: Well, to get a broader perspective on how the GOP presidential candidates are handling climate disruption on the campaign trail, I’m back in the studio now to speak with Clare Foran, associate editor of the Atlantic. Clare talked to us as the presidential race was starting to heat up nearly a year ago. Clare, welcome back to Living on Earth!

FORAN: Thank you so much for having me!

CURWOOD: Now when we talked to you a year ago, the race was just heating up when you talked to us about the various Republican candidate positions on climate change. At the risk of a pun, what change do you see in that field?

FORAN: Well, I think that in the last year, a couple of themes have emerged. Last time I talked to you, it seemed like most candidates were willing to say that the climate was changing, but they just didn't want to necessarily say that human activity was to blame. In the year that's followed, you've seen some candidates who are trying to stake out a more moderate territory and perhaps test messages around climate change that might resonate in a general election. These would be candidates like Jeb Bush, who said in the last year that he's concerned about climate change, that it is something that should be thinking about, though he has still equivocated when asked exactly how much human activity is contributing. Carly Fiorina has also said, yes, climate change is something we need to think about, but both Bush and Fiorina, as well as some other prominent Republicans, have sort of suggested that this is something perhaps the free market will take care of. And then you've also seen Ted Cruz and Donald Trump take a different tack, and sort of adopt rhetoric that is inflammatory. Donald Trump, I believe, recently referred to climate change as a hoax. Ted Cruz also has warned against global warming, what he says is alarmism. So you've seen sort of different responses in the last year. 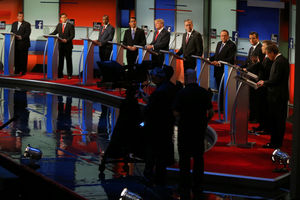 CURWOOD: What did you think of the response of Jeb Bush to the notion that hey, if were President, he'd have to respond to the Paris accord. He didn't seem to know so much about it, it felt to me.

FORAN: Yeah. Well, I think in the last couple of months, we saw sort of this historic Paris climate summit, one of the most significant international steps to dealing with climate change. And what was really interesting is that, a lot of the Republican presidential candidates didn't even really react even when that summit was going on and kind of in the aftermath of it, and I see Jeb Bush's response to being asked about that very much in the same vein. He's willing to sort of engage when pushed, and what he seems to be doing is essentially undermining what the President has attempted to achieve with the deal. Youknow, if you listen to what Bush was saying, he was trying to argue that the President really did not have the authority to go to Paris, and to strike this deal, but he does not say what he would do.

CURWOOD: Marco Rubio was fairly clear that when it comes to helping developing nations, he's not aboard. 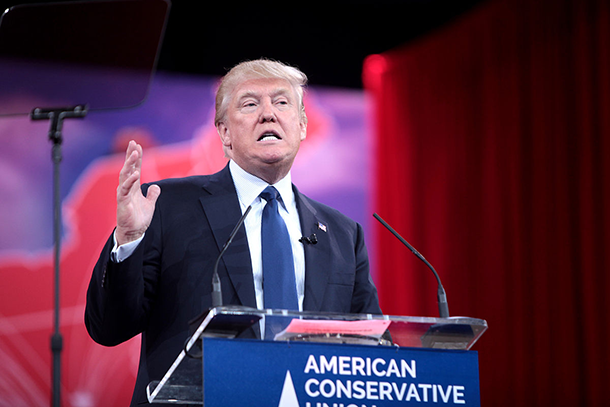 FORAN: Yeah, so Marco Rubio similarly offering a line of argument that many other Republican presidential contenders that have echoed, arguing that there's a lot of other countries out there belching smog and pollution and what can we really do, and perhaps the US should not be leading on this issue, which I think has the same functional effect of Jeb Bush questioning the legality of the Paris agreement. It just suggests that the US should not be taking the leading role in trying to corral the other nations into making carbon reductions.

CURWOOD: What did you make of the sort of wink and nod that John Kasich had about how his contenders, his opponents in the primary races view climate. What do you think he was trying to signal with that?

FORAN: Kasich's been interesting to watch on climate change in the last few months because, so on the one hand, you have Kasich who is trying to position himself as a more moderate Republican, somebody who's kind of a voice of reason in a Republican party that's kind of seen Donald Trump steal the spotlight away. But on the issue of climate change, in some ways, he's offered seemingly contradictory positions. And you saw that even in that exchange he sort of said well, I support clean energy and I don't think we should worship the environment, I think we need to have a balance. But he's not necessarily clearly laying out what he thinks should be a plan of action. And Kasich has been interesting to observe in the Republican primary debates. There was a December Republican debate right around the time of the Paris climate summit, and Kasich proactively brought up climate change and essentially said, the administration is out there in Paris dealing with climate change, well that's not the right priority. We should be talking about ISIS and the threat of terrorism. He wasn't even asked about climate change, and a lot of national security experts would argue that that's not the way to be thinking about the issue because climate change can exacerbate national security threats. 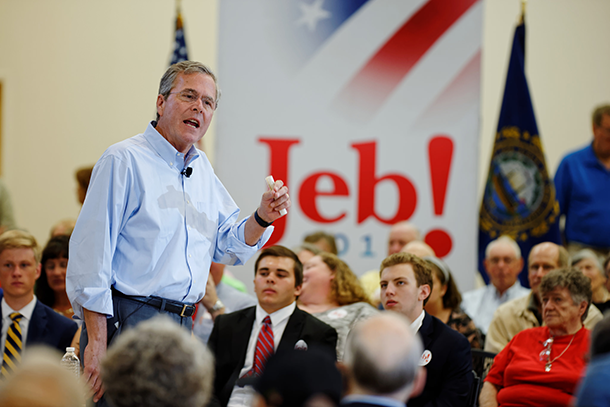 CURWOOD: What about Governor Christie and Senator Paul? To what extent have they moved since we talked a year ago?

FORAN: Well, I think that Rand Paul has sort of talked in the past about the need to sort of make sure that the environment is protected and he spoke about that in very general terms, and Christie has acknowledged the threat of climate change, but we certainly have not seen them proactively bringing this topic up, you have not seen them outlining any proposals, and I think it really just gets back to the fact that this is just a subject that candidates are seeking to avoid, taking a stance that climate change is real and that we need to do something about it. It doesn't play as well with the most conservative of Republicans as it does moderates and independents. I think it's been interesting to see how you really haven't seen moderators of most Republican debates asking about climate change either. These candidates are not being pressed.

CURWOOD: Now, Clare, we've seen polls saying that in a general election, a substantial majority of voters wouldn't support somebody who doesn't want to take action on climate change. So, how does that polling affect what these GOP folks are doing at this point in the campaign? 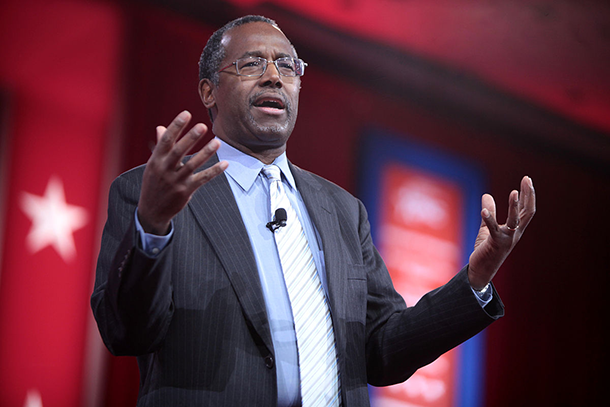 FORAN: I think that that's where you get to Jeb Bush, I think Fiorina and also to some extent Marco Rubio talking about this idea that perhaps the private sector, the free market, innovation, may be a way to solve climate change. I think it's possible that candidates will start to advance that line of argument more as we get into the general, but perhaps leave themselves wiggle room and not necessarily come up with a plan for sort of how the government under a Republican president should respond to climate change, but to rather suggest that this is something that the free market should deal with. But what it's glossing over is just that sort of a massive amount of research and development needs to be sort of invested in order for us to have breakthroughs that would allow clean energy to compete better than it is currently against fossil fuels, and historically, those have been investments made by the government.

CURWOOD: So, if you look at the Las Vegas odds-makers, they say that it's Donald Trump or Marco Rubio who’s ultimately the Republican nominee and those same odds-makers say that Hillary Clinton will be on the other side of the ticket. If that is indeed how the race plays out, to what extent do you think climate could influence the much desired swing voters.

FORAN: So, there's certain issues, things like abortion, and in some cases for some voters, gun rights that people will vote for or against a candidate based solely on that one position. Climate change, I don't think falls into that category. I mean, there's a lot of people who would say that climate change is important, but are not going to be voting based solely on a candidate's position on climate change. But I do think that climate change has the potential to become sort of this marker that broadly characterizes a candidate. So, for example, if you have somebody like Donald Trump who says that climate change is a hoax, that sort of asks as a signal to voters that this is somebody who is rejecting mainstream climate science, and it may be something that voters can kind of look at the stand or position of a candidate on climate change and that may be something that informs their broader opinion, for or against.

Clare Foran is an Associate Editor with The Atlantic, where she covers climate change, immigration, the 2016 presidential election, and all things politics. (Photo: Naomi Arenberg)

CURWOOD: Clare, to what extent does the GOP risk becoming irrelevant as a party with its failure to address climate disruption?

FORAN: Well, I think that this is something that will have to be addressed by Republican candidates in the general election, but I don't think there is any reason to believe there’s going to be a steep penalty for attempting to evade it in the primary. So, I think the question becomes, how much and in what ways does the Republican candidate address this in the general and are we going to see some type of a Republican or conservative sort of proposal to deal with climate change or are we just going to see candidates essentially paying lip service to the idea that there is a problem, but leaving themselves enough wiggle room to evade actually putting out a platform that would deal with it.

CURWOOD: Clare Foran is an Associate Editor at the Atlantic where she covers the 2016 election, climate change, and for that matter, all things politics. Thanks again, Clare.

FORAN: Thank you so much.

Listen to our previous discussion with Clare Foran

Where the Candidates Stand on Climate Change

Washington Post:Republicans might actually be willing to do something about climate change