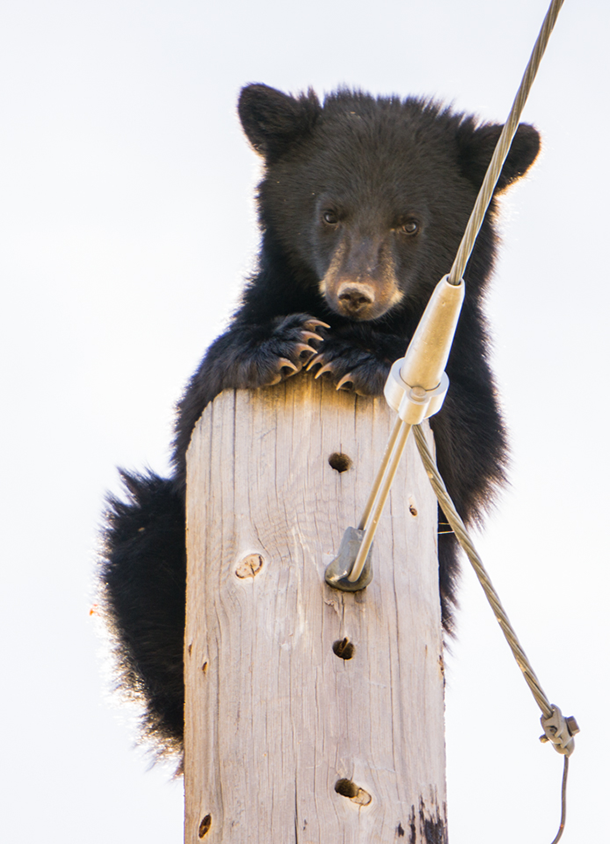 The black bear cub perched atop a telephone pole, just seconds before he lost consciousness from the tranquilizer and fell. (Photo: Sarah Hewitt)

2015's heat and drought in Montana forced many black bear families to forage far from their natural habitat, and many young cubs were orphaned during the trek. Reporter Clay Scott follows game wardens as they rescue one such cub and transport him to safety.

CURWOOD: One topic in the news at the moment involves the question of how to share the resources of the American west. Wildlife there is often protected by authorities, but it’s not always appreciated by locals when there are shortfalls. Reporter Clay Scott of Mountain West Voices brings us a tale of how game wardens in Montana cared for a lonely black bear cub.

SCOTT: The hot dry summer meant not a lot of berries, and that in turn meant that many bears had to forage far from their normal territory. Quite a few of those wandering bears ended up being shot, or hit by cars. And that means there were a lot of orphaned black bear cubs this year. Like the one a friend and I saw when we were driving down a dirt road on the prairie, miles from suitable black bear habitat. At first, as it scurried through the grass, it looked like a black lab puppy. Then it scampered up a power pole.

MURPHY: We’ve been really, really busy with bears, all throughout the state this year. We’ve handled a lot of different urban wildlife bear complaints.

SCOTT: That’s Brady Murphy. He’s a game warden in Augusta, Montana. When he arrived, less than a half hour after I called him, the cub was still looking down at us from the top of the 40-foot power pole.

MURPHY: We’re just gonna be able to kind of hopefully get some Telazol in him, tranquilizers, and get him relocated. See what we can do with him. 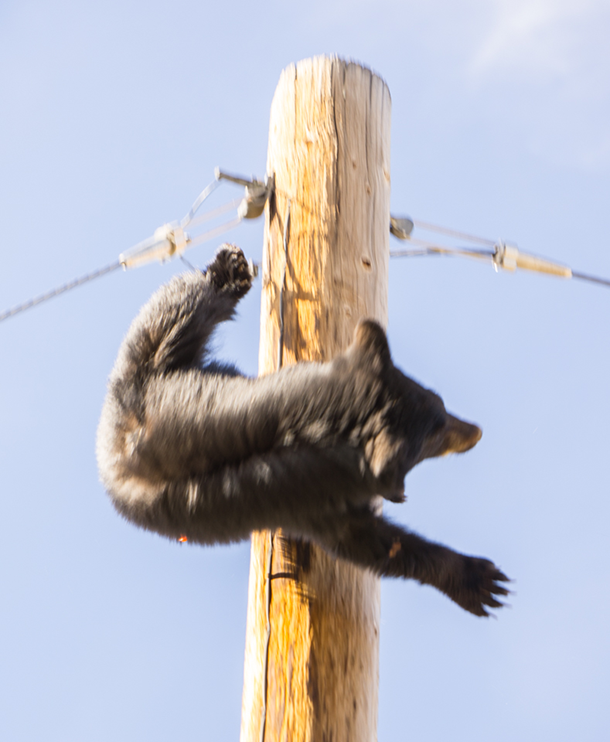 The cub was unconscious within 45 seconds of being hit with a tranquilizer dart. (Photo: Sarah Hewitt)

SCOTT: Brady doesn’t have any tranquilizer darts, so he puts out a call for help. Two wardens respond from other districts.

MURPHY ON RADIO: Bob Thomas Road. Are you coming up 287? So you’ll come up…it’s…

SCOTT: Game wardens in Montana cover vast territories. Teigan Winters is driving 50 miles to get to where we are. Kqyn Kuka is on her way from north of Great Falls – that’s an hour and a half drive. I ask Murphy why, in the middle of hunting season, three wardens would converge on a power pole in the middle of the prairie to tranquilize a black bear cub.

MURPHY: You don’t do this job to get rich. You do it because you love the resources and you wanna protect them. And you have that strong passion.

SCOTT: Finally, the other wardens are here. Kuka has brought a dart pistol. Winters has tranquilizers. The trouble is, even if they manage to hit the bear cub with a dart, it wouldn’t survive the fall. They need to get him to come down. Murphy grabs a shotgun.

MURPHY: We just have a simple cracker shell…coming out of a shotgun…it’s essentially a big firecracker. We’re gonna try and shoot it way up above him…hopefully that bang will encourage him to move a little bit and come down or something…so we’re gonna give it a try. Ready? 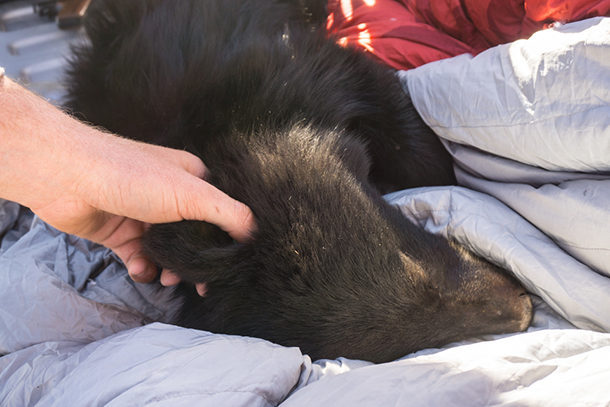 The game wardens safely caught the cub in a sleeping bag as he fell. He was unharmed. (Photo: Sarah Hewitt)

SCOTT: At the explosion, the cub doesn’t even flinch. We back up several hundred yards. The plan is to lure the cub down, then chase him up a smaller pole and dart him. Kuka has offered her sleeping bag as kind of net to catch the cub as he falls. She’s at the wheel of her pickup, and the rest of us are in the back. Murphy has the dart pistol at the ready. We watch the bear through the binoculars. At this distance, he’s a black dot against the prairie sky. Finally, the cub straddles the pole, and starts to move down.

MURPHY: I think he’s about down...or close...I want him all the way down before we go up there.

WINTERS: I’d rather have him out on the ground and we’ll get him out in the field.

MURPHY: I think he’s down. Does it look like he’s down? [CAR DOOR] 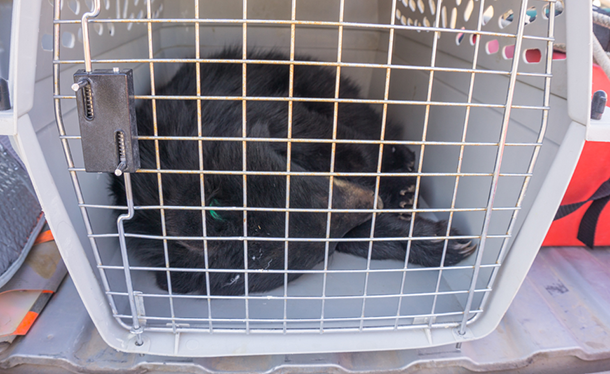 The cub was transported to a wildlife rehab center. (Photo: Sarah Hewitt)

SCOTT: The cub scurries across the road and up the smaller pole.

KUKA: We can catch him from there.

WINTERS: Get your sleeping bag.

SCOTT: The wardens gather round with the tranquillizer dart.

SCOTT: The bear wobbles and falls.

SCOTT: They rush to catch it.

SCOTT: They lay the cub carefully in the back of the pick-up. It turned out to be a male, less than 25 pounds. He’ll spend the winter at Montana Wild, the wildlife rehab center in Helena, and will be released next spring.

For Living on Earth, I’m Clay Scott in Augusta, Montana.