The Campaign and Climate Change 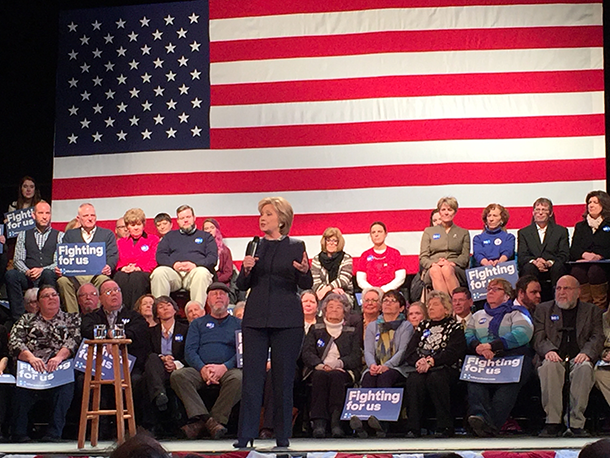 Host Steve Curwood tracks down more presidential candidates to report on their climate change stances prior to the New Hampshire primary. Seeking the Republican nomination, Texas Senator Ted Cruz expresses skepticism about the science and argues that acting on climate change kills jobs. Meanwhile, chasing the Democratic nomination, former Secretary of State Hillary Clinton believes renewable energy could be a boon to the American economy, and Vermont Senator Bernie Sanders invokes the moral outrage of future generations to drive home the urgent need to act.

CURWOOD: I’m back out on the campaign trail in snowy New Hampshire chasing presidential candidates as they discuss – or don’t discuss – the environment. On a cold night in Rochester I stopped by a campaign rally for Texas Republican Senator Ted Cruz. It was an older and mostly conservative crowd with former NH House speaker Bill O’Brien and former US Senator Bob Smith on the platform. But though Senator Cruz talked about his religious beliefs he said nothing about the environment or climate change and no one took the microphone to ask about them. So as the rally broke up, I waded into the crowd to ask myself.

CURWOOD: What does your faith tell you about how we should care for creation?

CRUZ: Well, look, of course we have to be good stewards of the environment, we have to care about clean water and clean air. I think that is very very important. What unfortunately has been the case in this administration is that many people in the EPA are not focused on clean air and clean water, but instead have behaved like zealots, just shutting down human development and I think that's the wrong approach to take. We need a common sense approach. Look, when it comes to clean air and clean water, what happened in Flint, Michigan, for example, is an absolute disaster, and it's a failure of government at every level. That's what we need to be doing is protecting the water supply so that people aren't being poisoned. We shouldn't be using regulations to shut down jobs and economic growth for the country.

CRUZ: I think it needs to follow the science and the data.

CURWOOD: And the science is wrong?

CRUZ: I chaired a hearing a couple of months ago. I'm the chairman of the science and space subcommittee of the Senate Commerce Committee on the science behind global warming. We brought in expert scientists. The data do not back up the theory that the politicians are pushing, and in particular, the satellite data demonstrate that for the last 18 years there has been no significant warming measures whatsoever. The computer models say it should be warming like crazy. The satellites that are actually in the atmosphere measuring the temperature show that it's not happening, and so I don't think we should follow political theories when they are contradicted by the science. 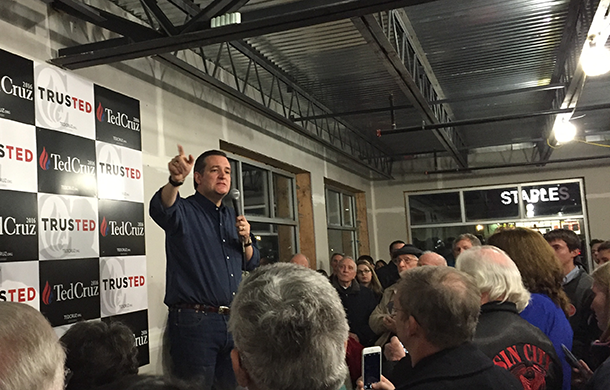 Despite evidence from NASA that confirms the Earth is warming, Texas Senator Ted Cruz continues to assert that satellite data show no temperature increase on Earth over the last eighteen years. (Photo: Steve Curwood)

CURWOOD: By the way, scientists at NASA now say observational errors in the oceans made it first appear there had been little warming over the last 18 years, but now those satellite data biases have been corrected and there is no doubt - the Earth is getting hotter.

A few days later across town at Rochester city hall and opera house, New Hampshire’s Democratic US Senator Jeanne Shaheen introduced Hillary Clinton. There were plenty of women in an older and decidedly more liberal crowd, and they cheered the Secretary’s ideas for rebuilding the economy.

HILLARY: There are so many jobs that not only could we create here with the proper incentives in our tax code, we could actually bring those jobs back from overseas by giving businesses more reason to invest right here in America.

And one of the biggest opportunities for job creation is combating climate change. Now, that's not only something we have to do for our own sake, and it's something I've been working on for years, because I know it's serious. I love it when the Republicans as they often do are asked about climate change and you know what they say, they say, "Well, I don't know. I'm not a scientist." And my response to that is “go talk to a scientist and actually listen to a scientist”and understand what are we up against. But what they don't seem to get either is this is a great job opportunity. There are so many jobs in clean renewable energy to be built in this country.

They can't be exported, they have to be done, right here. If you're putting up wind turbines, if you're putting up solar arrays or photo voltaics, if you're working on geothermal, if you're working on biofuels and advanced biofuels which are now being tested as Jeanne knows, for use in our Navy ships and Air Force planes, that’s American ingenuity, our creativity, our technology at work right here. 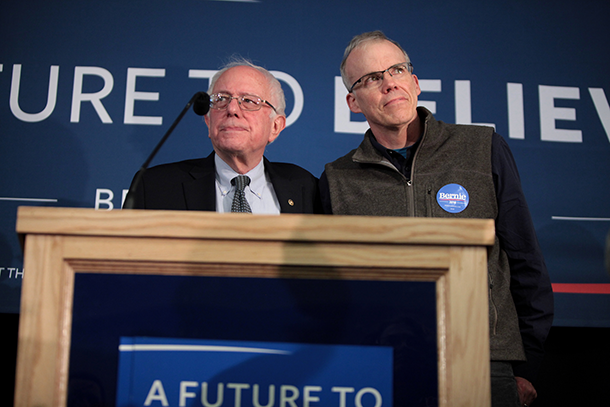 MCKIBBEN: NOAA, the National Ocean and Atmospheric Administration announced that 2015 had indeed been the warmest year on record, and not by a little, by a lot. We're beginning to break apart this planet.

SANDERS: But what Bill understands, and what this campaign understands, he understands that if we're going to deal with the crisis, the enormous crisis of climate change, it's not going to be a handful of environmentalists just publishing important papers. That's important. We need a grassroots movement all over this country and all over the world. And I was so pleased a year and a half ago to be in New York City. When was that, Bill?

SANDERS: We had, what, 400,000 people marching and say Congress and the world, we have a huge crisis, and it has to be addressed. And I was particularly pleased to see so many young people, and people of color, from all over our country and all over the world saying that this is an issue that we have to deal with and have to deal with boldly. And I often think, as the father of four, and as the grandfather of seven beautiful, beautiful grandchildren that they will look back on this time. They and the children all over the world. And I want you to think about this, think about 50 years from now when more droughts and more floods and more extreme weather disturbances and more acidification of the oceans and the unbelievable impact that that has on our lives, more sea level, rising sea level, more conflict as people fight for limited natural resources. And 50 years from now, they're going to look back on us and say,“the scientists told you what would happen...why didn’t you do what you had to do?”

CURWOOD: The crowd loves the urgency, but the question now is what will voters do. And it’s unclear how much the upcoming primary and general elections will turn on the issue of climate change and our responsibility to act to avert its dangers.

Bernie Sanders campaign, “Combating Climate Change to Save the Planet”

Our previous coverage tracking the candidates: The Changing Climate in the GOP Race

Twitter fight! Bernie and Hillary battle it out over who has the better climate plan