Defunding the Clean up of Abandoned Coal Mines 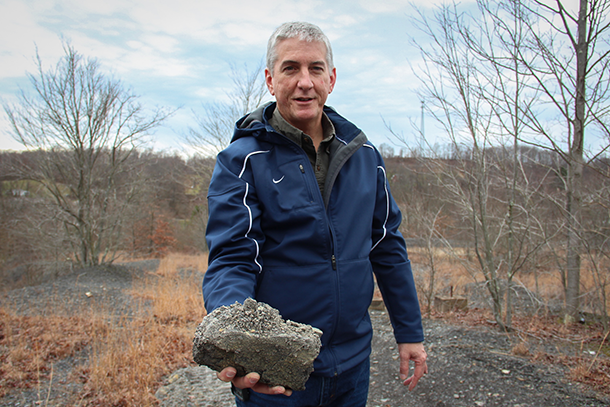 Eric Cavazza, director of Pennsylvania's Bureau of Abandoned Mine Reclamation, holds up some coal refuse from the waste pile in Fredericktown. (Photo: Reid Frazier)

Abandoned coal mines must be cleaned up for the health of the environment and regional waterways. But much of the funding for these projects comes from fees on new mines. Now with the slump in coal use, there’s less money to straighten up the toxic legacy of coal mining's past. The Allegheny Front's Reid Frazier reports.

CURWOOD: Environmental injustice is not limited to communities of color. Consider the temporary moratorium the Obama Administration has imposed on coal leases on federal lands. This come on the heels of the nation’s second biggest coal company, Arch coal, seeking bankruptcy protection, due to declining demand at US power plants and increasing concern about emissions. Among the victims of coal’s decline is the effort to clean up old abandoned mines. That's because the government pays to reclaim old mines by exacting a fee on new mines. And as the Allegheny Front’s Reid Frazier reports, now there’s less money to clean up the legacy of coal mining in Pennsylvania, where poverty rates are high.

FRAZIER: About an hour south of Pittsburgh, Eric Cavazza trudges up a steep hillside of loose rocks and pebbles

CAVAZZA: There is a wooded hollow, over this way...

FRAZIER: Cavazza is head of the Pennsylvania Department of Environmental Protection's abandoned mine lands program. He’s leading me up a coal-refuse pile. It’s basically a hill made out of coal mine tailings. There used to be a mine here, in the small village of Fredericktown. This pile is all that's left of it.

CAVAZZA: And this is all the waste material which was trammed back up on the hill, they had a big conveyor and they just dumped it.

FRAZIER: The pile literally backs up onto peoples’ houses here. Hardly any trees will grow on it, it’s unstable, and it’s a nuisance for the town below it. 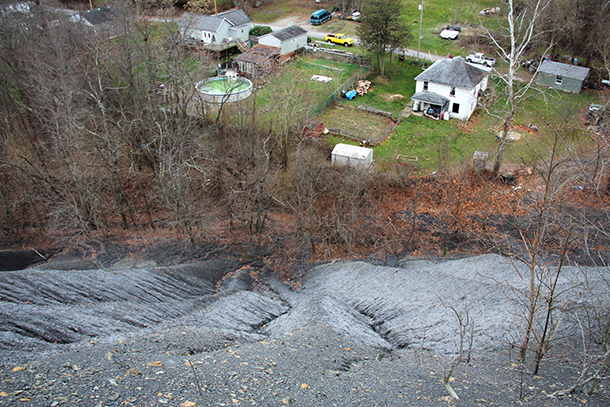 An enormous coal refuse pile hovers over the town of Fredericktown in southwestern Pennsylvania. Decades ago, companies just left piles like these behind when a mine closed. Because of this, Pennsylvania has been left with hundreds of these sites-the most of any state in the country. (Photo: Reid Frazier)

CAVAZZA: And the material erodes off here, it erodes into the river and gets into small streams it blocks storm sewer system in the towns.

FRAZIER: The pile was created before modern environmental regulations required mines to clean up their mess. Decades ago, companies just left piles like these behind when a mine stopped making money. Pennsylvania has been left with hundreds of these sites - the most of any state in the country.

CAVAZZA: We were a leader in mining for a very long time - fueled a couple of world wars and the industrial revolution. Unfortunately we're left with many problems from that.

FRAZIER: Cavazza would like to clean up this pile, but his funding source keeps shrinking.

CAVAZZA: I definitely think had we continued to get the grants the size we were getting about three or four years ago this project would be done probably within the next couple of years. But we're at the reality now where these really large dollar projects, we're probably only going to be able to tackle one per year, and there are a lot of them.

FRAZIER: What’s happening to that money? Lots of things - including the budget sequester implemented by Congress a few years ago. That’s taken millions out of the state’s cleanup program. Also, there’s this fundamental problem: the federal government pays for abandoned mine cleanup by assessing a fee on current coal production. And as current production takes a nosedive, there’s simply less money coming in to pay for clean up. Andy McAllister is with the Western Pennsylvania Coalition for Abandoned Mine Reclamation.

McAllister: We need every scrap of money we can get in this state to fix this problem. 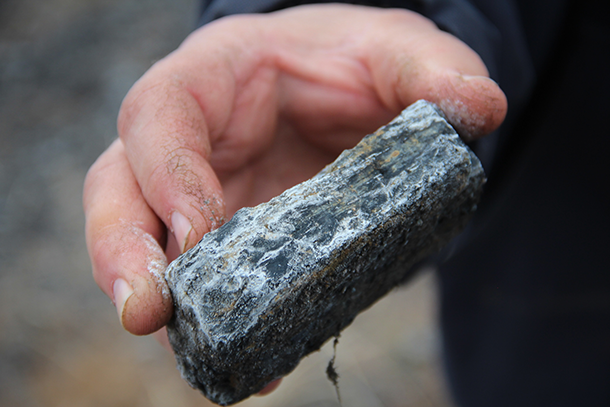 FRAZIER: McAllister works to get more federal dollars to pay for mine cleanups. But the economics of the coal industry are working against him. Sitting at his desk, he pulls out a sheet of paper with production figures from the last available year, 2013.

FRAZIER: Pennsylvania officials estimate the slowdown in coal will lead to about a 6 percent decline in mine cleanup money this year. The shortfall in funding will slow efforts to clean up what is essentially a slow motion environmental catastrophe in the region. Abandoned strip mines, refuse piles, and mine drainage have poisoned thousands of miles of streams in coal country. Paul Ziemkiewicz is a water scientist at West Virginia University.

FRAZIER: Mining exposes rocks like iron pyrite and shale to oxygen. When water flows over these rocks, it creates an acidic stew that leaches metals into waterways, and lowers the pH of streams to the same level as vinegar.

ZIEMKIEWICZ: The fish just can't live in an environment with a pH of say, 3. That just pickles them. They just don't live.

FRAZIER: Pennsylvania alone has 5,000 miles of streams that have been impaired by mine runoff from places like the Fredericktown waste pile. Back on top of the pile, Cavazza shows me one of the culprits - a dark rock with a light frosting on its surface.

CAVAZZA: You see this lighter colored material that you see on top, these are sulphate salts, they're from the oxidation of pyrite when it rains, this is like the instant coffee of mine drainage.

FRAZIER: By simply grading the pile, capping it with soil, and seeding it with grass, the state could dramatically improve the water quality coming off of it. Cavazza’s group did just that with a nearby pile last year. One reason why THIS site is so pressing for Cavazza is that this isn’t some remote place - this dump is in the middle of a town, Fredericktown. Just ask Julie Bundy. She lives literally across the street.

BUNDY: The slate dumps. Yeah when we talk about where we live, we live across from the slate dumps. Everybody knows where that is. I think it´s just something everybody has accepted as being a part of the community.

FRAZIER: Standing on her porch, Bundy says the pile isn’t so bad during the summer. The leaves on the trees make it so you almost can’t see the pile.

BUNDY: The only time I really notice it too much is when the teenagers come down and they want to go up on the slate dumps either on their quads or dirt bikes.

FRAZIER: When she was a girl, her parents wouldn’t let her near the dump. She’s got little kids and doesn’t like the fact that people she calls "shady characters" park their cars near her house and go up onto the pile.

BUNDY: I know my neighbor told me at one time it was a farm, and there was apple orchards and everything on that property, and it was very beautiful at one time, and then, this happened.

FRAZIER: Bundy thinks it would be beautiful if someday the big pile across the street goes away. I'm Reid Frazier.

Bureau of Abandoned Mine Reclamation in the PA DEP

Coal production is at its lowest point

OSMRE Provides Nearly $225 Million in Funding for States and Tribes to Reclaim Abandoned Coal Mines, PA will receive $43 million of this

Nationwide, there's a backlog of more than $4 billion worth of "high priority" abandoned mine projects