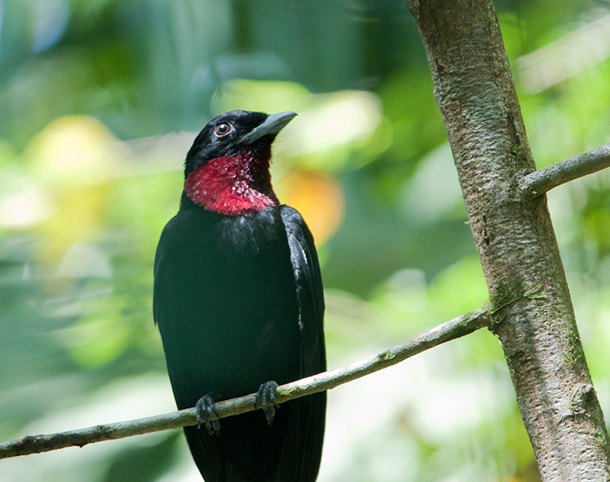 In Costa Rica, the vibrant colors of a winter sunrise are closely rivaled by the exuberance of its birdsong. BirdNote’s Mary McCann reports that while some of Costa Rica’s bird species hide from sight, their calls are highly distinguishable.

It’s still early in the winter season, and though it was a monster, we’ve only had one major snowstorm so far in the northeast. But that doesn’t stop some of us from dreaming about waking up somewhere warmer and more enticing…such as the landscape Mary McCann evokes in today’s BirdNote®.

On a winter morning in Costa Rica, a pair of Bay Wrens sings a brisk duet just before sunrise. Though the Bay Wrens stay well hidden in the underbrush, they have all the decibels they need to make themselves known. 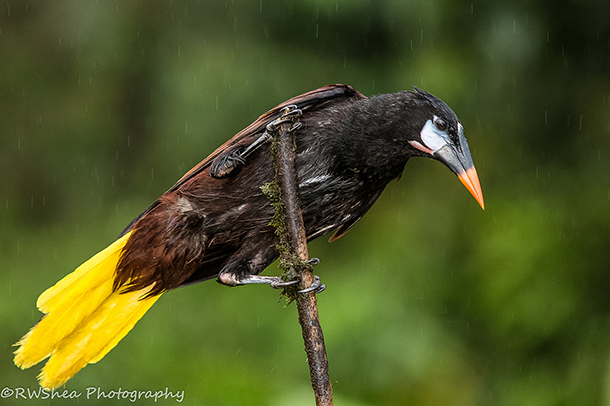 Montezuma Oropendolas are highly dimorphic in size. The species is polygynous, and dominant males perform most of the copulations at a colony. (Photo: Robert Shea FCC)

A breeze wafts in off the Caribbean Sea, less than a mile away, across the tropical lowland forest, fluttering the leaves of a tall giant fig tree hung with flowering bromeliads. Perched in the upper canopy, a small group of Keel-billed Toucans calls out.

Their comically large bills are painted in lime green, turquoise, orange, and magenta. In a nearby tree, Purple-throated Fruit Crows add their voices to the sunrise chorus.

The male fruit crows are jet-black with reddish-purple throats. Alongside the fruit crows, a huge oriole-like bird pivots upside down and belts out an electrifying series of notes: 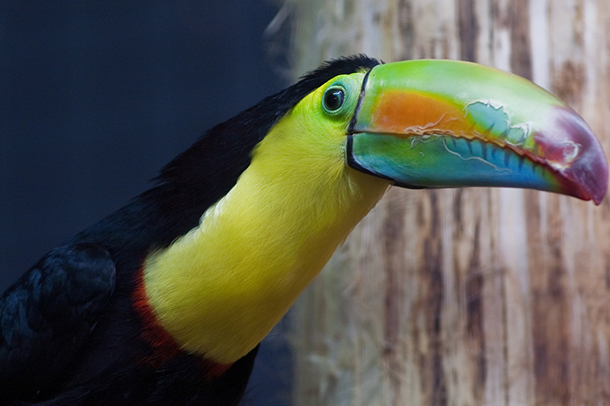 Keel-billed Toucan ordinarily utters a single note, a shrill, frog-like cree which it repeats in a series of about five to seven notes. Hatchlings have a buzzy call, while juvenal toucans whine or emit a wailing sound. (Photo: MLL-FCC)

It’s a male Montezuma Oropendola, with one of the most distinctive voices in the tropics.

Finally, a Bright-rumped Attila calls from its perch hidden deep in the canopy.

The Attila will repeat its maniacal phrases until well after sunrise, reminding us again and again that it’s morning in Costa Rica. I'm Mary McCann. 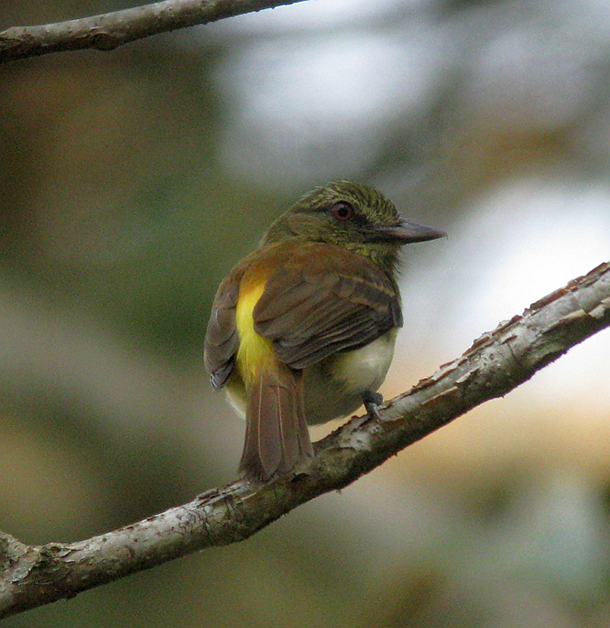 Twelve subspecies of Bright-rumped Attila are generally recognized across this species’ broad range, stretching from northwest Mexico to northwest South America. Their range spans much of the lowland in the northern two-thirds of the continent. Another population can also be found in the Atlantic Forest of eastern Brazil. (Photo: Paul Bedell-FCC)

CURWOOD: You’ll find pictures of these exotically named and feathered songsters at our website, LOE.org.

About the Bay Wren

About the Keel-billed Toucan

About the Montezuma Oropendola