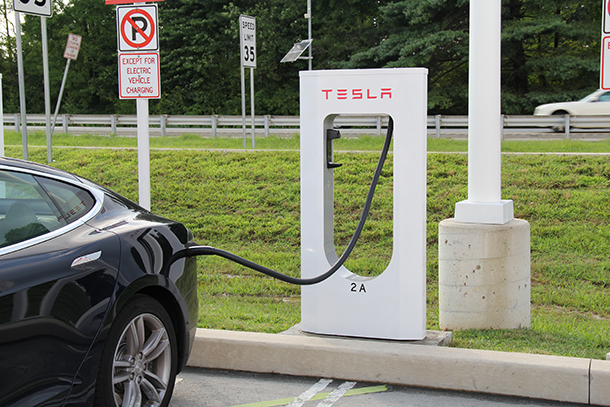 Gasoline prices are low right now, yet some manufacturers are poised to launch affordable electric cars with a 200 mile range. Host Steve Curwood speaks with green transportation reporter Jim Motavalli about electric cars and the future of renewable sources for electricity-- how Tesla’s Powerwall and a large fleet of electric cars could help stabilize the grid, and add flexibility to our greener energy future.

CURWOOD: Back in 2011 when gasoline prices in the US were close to $4 a gallon, President Obama called for a million electric cars on the road in America by 2015. But so far Americans have only bought 400,000 EVs — less than half that goal. Range and price seem to be much of the problem — a $30,000 electric car barely goes 100 miles on a charge—even less if it’s cold. And if you want to go 300 miles on a charge, you have shell out $100,000 for a Tesla. But that’s about to change. Tesla and General Motors both say they will soon sell electric cars that will go 200 miles on a single charge for about $35,000. The Tesla is called Model three and the Chevy is called the Bolt. We called up green car expert and journalist Jim Motavalli to get the latest scoop on EVs. Welcome to Living on Earth, Jim.

MOTAVALLI: It’s great to be on, Steve.

CURWOOD: So, we’ve just had the Detroit auto show. What stood out to you? How green were the cars?

MOTAVALLI: Well, it's interesting. What's happening is the automakers are starting to put out plug-in versions of their cars just sort of as a matter of course, and I'm talking about mostly plug-in hybrids with maybe 30 to 40 miles of all-electric range and they're not making a big deal out of it. It's just becoming part of the background.

The upcoming Tesla Model 3 is predicted to be a scaled down version of the Model S, priced around $35k and with a range of 200 miles per battery charge. (Photo: Steve Jurvetson, Wikimedia Commons CC BY 2.0)

CURWOOD: Aha. Hey, which of those plug-in hybrids did you like?

MOTAVALLI: Well, I liked a lot of them. I think the Audi A3 is a really exciting car. There is going to be a plug in hybrid version of the Volvo S90. I was very excited by seeing the Chevy Bolt. I've been waiting for that for quite a while.

CURWOOD: I want to be sure I heard you correctly. You said Chevy Bolt, B as in boy not V as in volt.

MOTAVALLI: Exactly. B as in bolt is the companion car to the Chevy Volt. It is a all-electric battery car with 200 miles of range and a price around $35,000, that's after federal incentives probably.

MOTAVALLI: Yeah, yeah. See what happened is Tesla drew a line in the sand and said it was going come out with its Model 3 and that would be a 200 mile range car for about $35,000, so GM looked at that and said,“well we can beat them the market.”and essentially that's what's happened. The model 3 will be shown next month.

CURWOOD: Tell me about the model 3 that Tesla has announced its going to have and how is this different from the other electric vehicles we've already seen in Tesla's own very pricey hundred thousand dollar mobile? 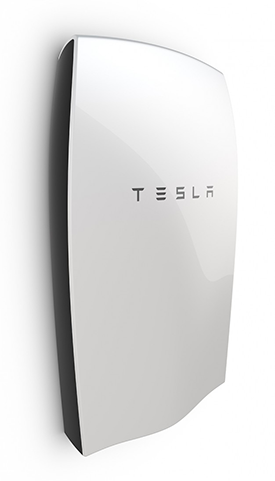 The Tesla Powerwall is a battery array that can be charged with energy from renewable power. It contains the same battery that will likely be in the Model 3. Together, Tesla and SolarCity are working to capture and store solar energy that could be used to power a home or an electric vehicle. (Photo: Tesla Motors - Tesla Energy, Wikimedia Commons CC BY 4.0)

MOTAVALLI: Well, Tesla is the king of range. People always complain they have what's called range anxiety about electric vehicles. When they came out with the Model S and it had up to 300 miles of range, people were knocked out about that, and of course you had to pay for it. What's interesting was they initially saw the Model S with a range of batteries like 40 kilowatt hours and 60 kilowatt hours and 85 kilowatt hours, and they thought that people who wanted a budget car would go for the one that was 40 kilowatt hour battery with less range. They didn't, so we'll see if 200 miles is a sweet spot for people, but can Tesla make money with a $35,000 car with a 200-mile range? That's a real challenge. On the other hand I would also say that I think a lot of people would want the Tesla because they've been priced out of the Tesla market and now they can get into it for a lot less money.

CURWOOD: Let's talk about the charging apparatus for these vehicles. To what extent will the new Tesla Model 3 be able to connect the vehicle to the grid? What about things like wireless charging?

MOTAVALLI: I would guess that it's going to have wireless charging. I think Elon Musk is interested in that. But one thing it will definitely have is the ability to connect to Tesla's supercharger network. Stations across the country that are 480 volts and can basically fill the car up in about half an hour.

CURWOOD: Now, other countries, I'm thinking of China, I'm thinking of India, they have air quality issues. So as I understand it, China's building up its own electric vehicle capabilities with inexpensive cars. How does that compare to what Tesla and the others have on the market?

MOTAVALLI: Well, Tesla has gone into China in a fairly big way but it's found it challenging to say the least. There are a lot of companies in China building electric cars for the domestic market but none of them have very big sales yet. The Chinese government has really committed itself to a big push to electrify the country's vehicle fleet, but it hasn't been acting very quickly to make sure that happens. The problem is there's not much of a charging network and it's an extremely large country. Most people, maybe 90 percent in the US charge at home, but in China people don't live in suburban communities with garages. They live an apartment buildings, so charging at home is not likely to happen, and there's got to be a really robust charging network both at your community, maybe your apartment building would have a garage and your workplace would have charging and there would be public chargers in every major city. That is far from happening in China.

CURWOOD: You mentioned charging electric vehicles at home, of course, Tesla has come out with what they call the power wall, that's a battery array to be used at home. What do you think of that development? 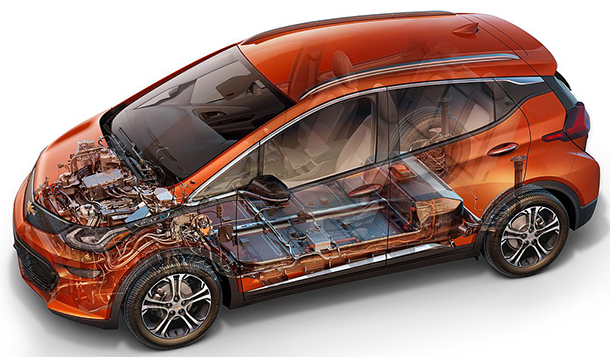 The Chevy Bolt is the all electric companion car to the Volt and thought to rival the Tesla Model 3. (Photo: GM, Wikimedia Commons CC BY-SA 3.0)

MOTAVALLI: I think that's a really interesting development, and it makes total sense for Tesla and its close relationship with a company called SolarCity. The batteries in the power wall are just the same as the batteries in the Tesla cars and can serve as backup for the solar panels from SolarCity. So there's a total sort of circular loop there and synergy, so the product makes complete sense and we've long been talking about how the grid will need battery back-up, but the device - it's a little bit expensive at $7,000 - so essentially it's a seven kilowatt-hour battery array that you'd have in your house.

CURWOOD: So what about the notion of using the electric car as well as, say, a power wall, to support a household? I mean, you can store a lot of electricity and use it in a very flexible way.

MOTAVALLI: That's taking off in a pretty interesting way. We have vehicle to grid communications which is what you're talking about and essentially the car can be a rolling battery depository that can plug into the grid and in times of peak power demand can return power to the grid, and if just one electric car does that, it's not a big deal but if you have say 100 of them, all with like 40 kilowatt hour batteries connected to a smart utility that is able to turn on their batteries when it needs them, and then doesn't have to turn on, say, a backup generator or what might be a coal power plant that is in reserve, and the vehicles will still end up being charged when their owners get into them and people will get paid for that, it has the potential to be a pretty good load leveler on the grid.

CURWOOD: Give me some blue-sky thinking. Where will we be in five or 10 years as far as the car energy markets are, in your view? 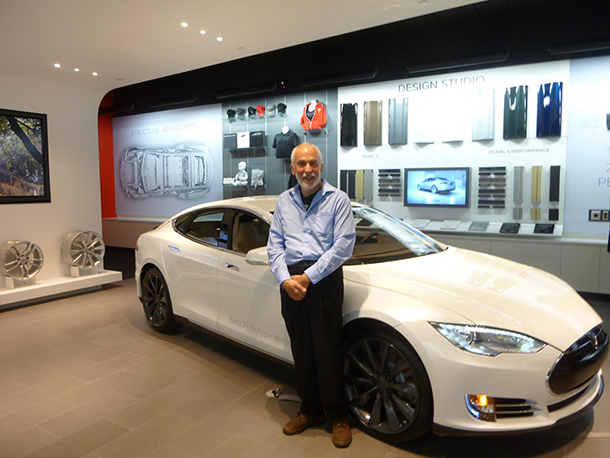 MOTAVALLI: I think we're moving away totally from fossil fuels. I think we're headed towards an all-electric fleet on the road. We've basically reached the point where range is no longer an issue - that's probably the biggest objection - but once you have 200 miles routinely an affordable price I think it's inevitable, and I think at the same time we are also heading for a renewable energy grid. It's going to be hard to make it work, but I think we'll have an international effort to make that happen.

CURWOOD: Jim Motavalli is an environmental writer who specializes in green transportation. His new book is called High Voltage. Jim, thanks so much for taking the time with us today.

MOTAVALLI: Great to be on with you. Always a pleasure, Steve.

CURWOOD: By the way, SolarCity is an underwriter of Living on Earth, but has no input or editorial say in the program.


Everything We Know About Tesla’s Secret Model 3...And Model Y

The Grid-Integrated Vehicle with Vehicle to Grid Technology

Elon Musk on Tesla and solar in Hong Kong and China