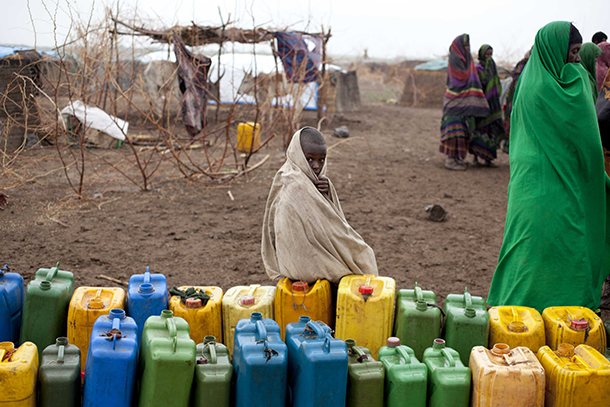 Drought associated with El Niño is hammering subsistence farmers in Asia, Latin America and much of Africa, and creating a hunger emergency for 60 million people. Host Steve Curwood speaks with Nahuel Arenas of Oxfam America about the unfolding humanitarian crisis.

CURWOOD: From the Jennifer and Ted Stanley studios at the University of Massachusetts Boston and PRI, this is Living on Earth. I’m Steve Curwood. The worst drought in decades is hitting much of Africa, Central America and Asia, thanks to one of the strongest El Niños ever recorded, and that means more than 60 million people are facing severe hunger.

And while El Niño has kept rain away from areas such as the Horn of Africa that are regularly short of water, it has pummeled other regions with storms, including the typhoon that recently ravaged Fiji.

Scientists now know the regions where the arrival of El Niño means drought won’t be far behind, and for months international humanitarian groups have been raising the alarm about the crisis. But there is still a shortfall in cash to deal with it. Nahuel Arenas, Director of the Humanitarian Response Department of Oxfam America, joins us. Welcome to Living on Earth, Nahuel. 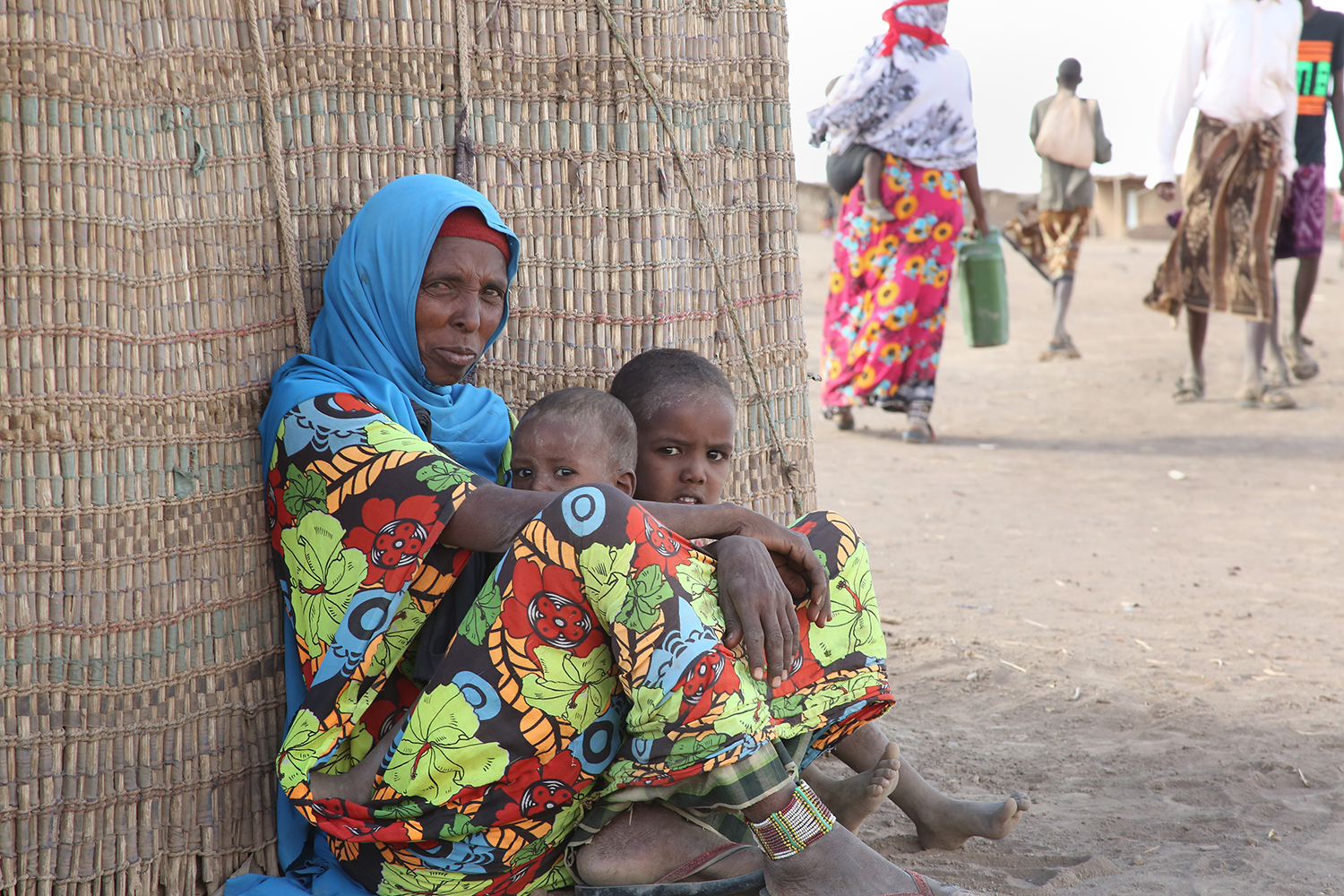 Fatuma Hersi with two of her children. She has lost all but 7 of her 300 sheep and goats since the drought began. (Photo: Abiy Getahun/Oxfam)

CURWOOD: So, what are we seeing in terms of drought across Africa right now?

ARENAS: So, what we are observing is really a concerning situation. It is a combination of drought exacerbated by the El Niño phenomenon which really creates a huge humanitarian crisis.

CURWOOD: Now, you say El Niño is involved. What does El Niño do for these droughts?

ARENAS: So, El Niño is a natural phenomenon, it happens every seven or eight years. What happens is that temperatures in the tropical Pacific Ocean become warmer than normal. That releases heat into the atmosphere and produces changes in rain patterns, in wind patterns, and also in ocean currents. So, in terms of its consequences, it has exacerbated weather events like droughts or floods. So, in places like Ethiopia, we are observing one of the hardest droughts in the last 50 years. This is really made worse by this El Niño phenomenon.

CURWOOD: As I understand it, though, with the link between El Niño and these droughts, there's an ability to predict that there's going to be trouble down the road. What happened this time in terms of predicting the drought in Ethiopia, and how has it helped handling the humanitarian crisis? 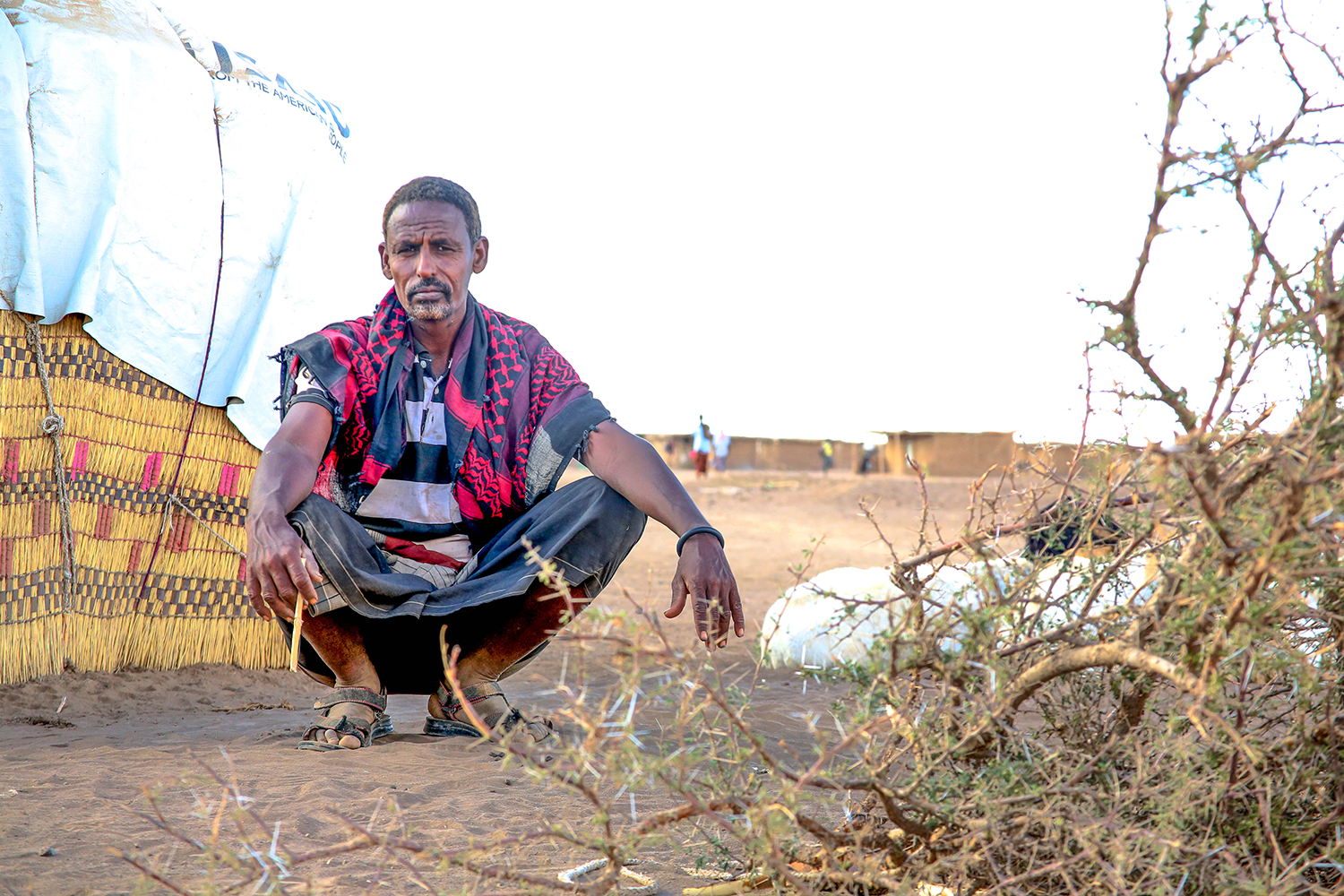 ARENAS: Yes, the capacity of governments and also humanitarian agencies to relieve these kinds of situations has really improved over the years, however, Ethiopia is still a country with 80 percent of its population depending on agriculture, and most of that is really dominated by small scale farming. Which means that farming is the means of survival for many people, and that leaves them vulnerable to climatic events like this one.

CURWOOD: How bad is it in Ethiopia right now?

ARENAS: Well, according to the Ethiopian government who has really been leading the response to this crisis, over 10 million people are in need of humanitarian aid, and this is in addition to the almost eight million that are already being supported by the government's existing emergency system.

ARENAS: Well, right now, if we are not able to act now, these numbers will increase over the next months. This is a trend we are observing also in other places in eastern and Horn of Africa as well in southern Africa, where overall in the world according to the UN agencies, over 60 million people will be affected by El Niño.

CURWOOD: So, Ethiopia's a hotspot. Where else? Southern Africa?

ARENAS: Well, places like Malawi, Zimbabwe, South Africa — harvests have been really, really hard hit. Prices of food are increasing by 50 to 100 percent. So it makes it really difficult for poor families to access food. 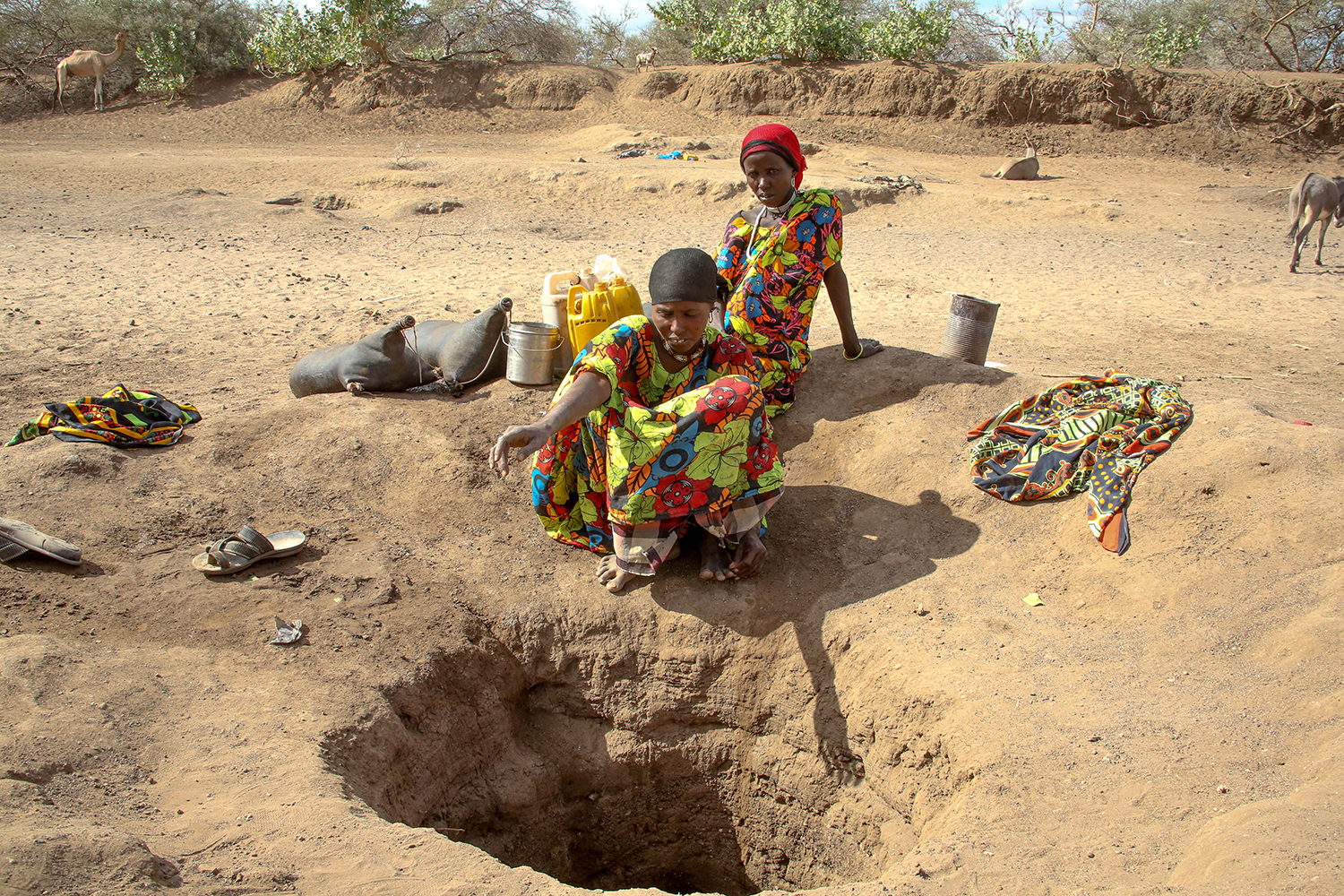 Amina Hassen and Shukri Ige try to get water from a well dug by villagers. (Photo: Abiy Getahun/Oxfam)

ARENAS: Yes, we are talking about Guatemala, El Salvador, Honduras and Nicaragua mostly. This drought in Central America we have been working, helping families to access food and water for the last 12 months, but the next months are really the ones that will make people suffer the most.

CURWOOD: So, how soon are we going to see pictures of starving babies, the horrible face of hunger that we saw a generation ago when things were really bad in the Horn of Africa.

ARENAS: Well, malnutrition is already a problem, particularly in places like Ethiopia. It's already a reality. The Ethiopian government has been very strong in leading the response. They have put around $200 million dollars to respond to this emergency, but the estimation is that to properly respond to the needs, we need $1.4 billion in Ethiopia only. So, we are hoping the international community is able to support countries like Ethiopia.

CURWOOD: To what extent is the United States government stepping up here to help?

ARENAS: The US is a leader in the world. We are hoping that they can do more and support governments around the world dealing with this crisis, but also humanitarian agencies. Also, for example, our funding tariff to assist 800,000 people is $25 million dollars, of which we have only been able to raise near $8 million, so I think we really need to be conscious of the current challenge and to step up and to double our efforts to respond appropriately before it is too late.

CURWOOD: So, how do you deal with this, Nahuel? What are some of the best practices that you folks in the humanitarian aid business employ when you run into situations like this? 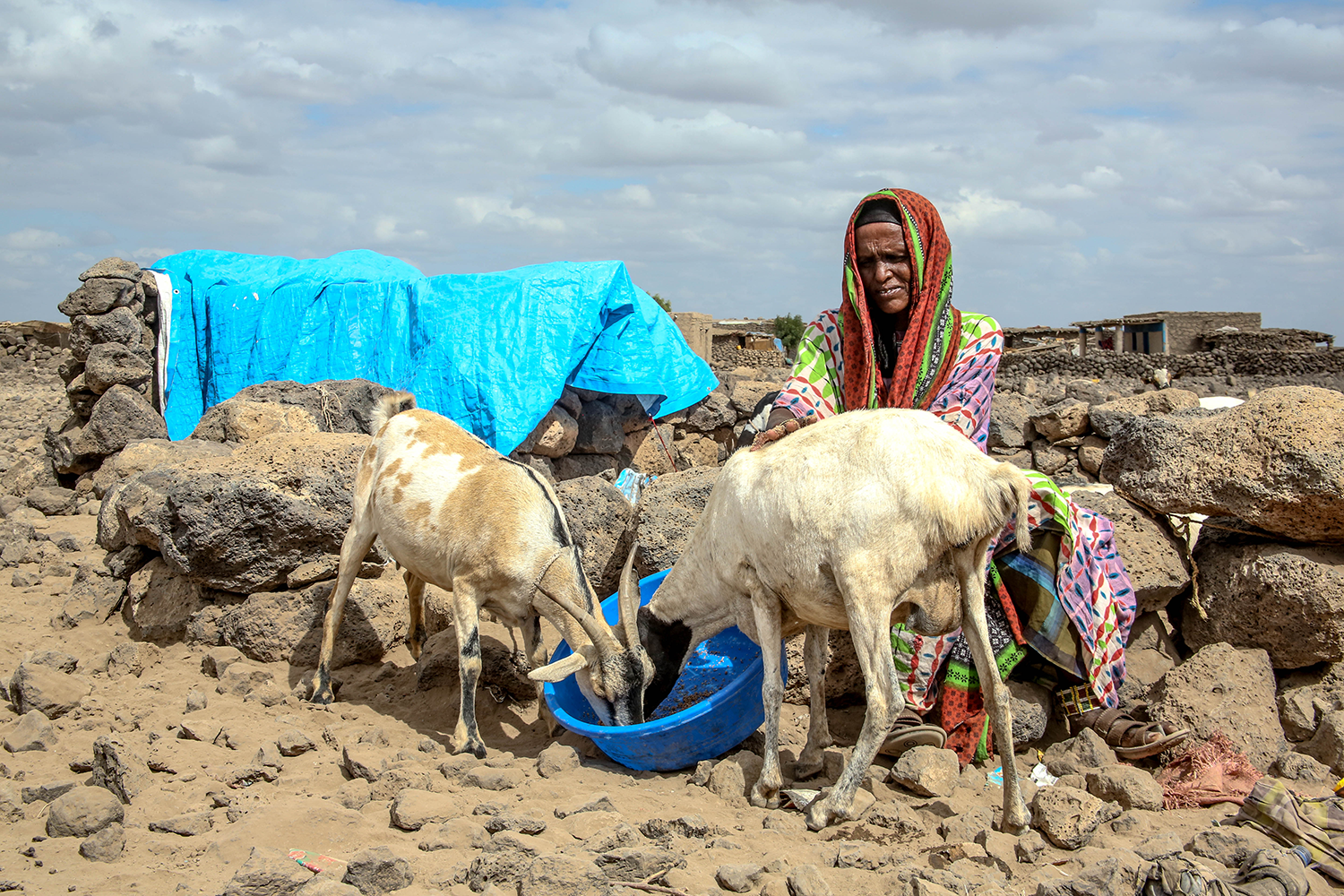 An Ethiopian woman with her goats (Photo: Abiy Getahun/Oxfam)

ARENAS: The humanitarian system really is overstretched. As you know, the crisis in Syria, the refugee crisis, right now we have a historic record in the number of displaced people in the world, over 60 million people. What we are doing in places like Ethiopia is really ensuring that the poorest families have access to safe water, access to food, keeping their livestock alive. Let's take an example of a poor pastoralist family in Ethiopia. They may survive a couple of hundred of sheep or goats and some camels, and what we are seeing on the ground right now is that these same families may possess now 10 goats or sheep and one camel. So, it's really hard for these poor families to recover. So, these are the kind of families that we are trying to help.

CURWOOD: So, what's your outlook on this with global warming? Some would say we're going to see a lot more of this.

CURWOOD: So, as someone who works for an international aid organization, where does climate disruption rank in terms of the humanitarian threats that people are facing around the world right now? 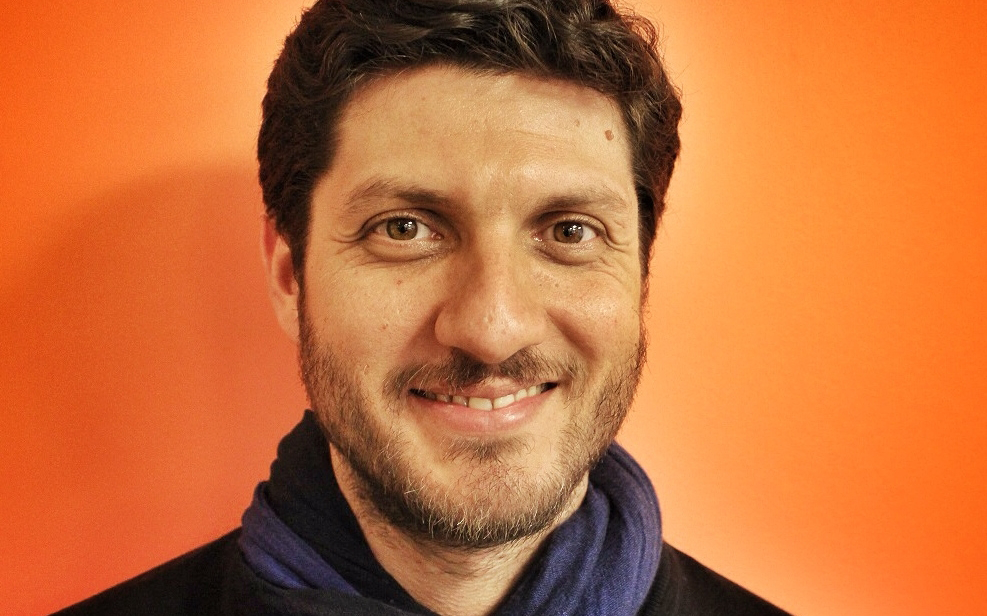 ARENAS: Well, it's something that we need to think of not only in the short term in terms of humanitarian response, we need to be looking at this in the long run. And that means different strategies to help communities with climate change adaption, so it's imperative that we tackle this now. What we've seen in Paris in terms of commitments to climate action, it's great, it's really a landmark step. Over 190 countries committed to climate action, but what we need is further commitments to ensure there is sufficient climate adaptation finance for vulnerable communities to adapt to increasingly unpredictable and extreme weather events like this one.

CURWOOD: Nahuel Arenas is Director of the Humanitarian Response Department of Oxfam America. Thanks so much for taking the time with us today.


Oxfam report on the Ethiopian drought

Impacts of El Niño around the world