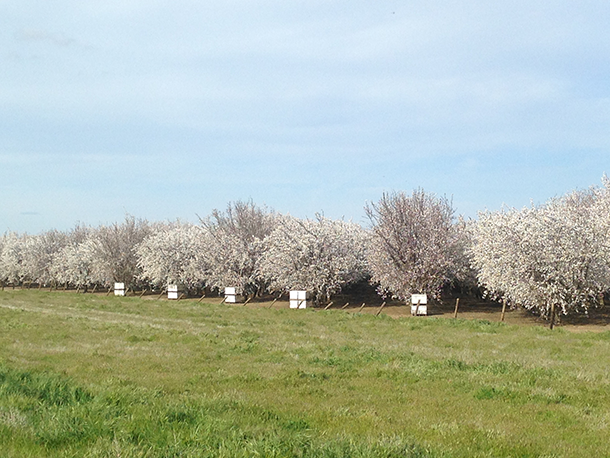 Beehives are spread out along rows of blooming almond trees. (Photo: Emmett Fitzgerald)

Eighty percent of the world’s almond supply is grown in California’s Central Valley. Those nut trees need a lot of water and also honeybees to pollinate the blossoms. Living on Earth’s Emmett Fitzgerald visits the orchards with an almond farmer and a migratory beekeeper who have been working together for over 30 years.

CURWOOD: The Central Valley of California could still use more water, but there was enough to cause thousands of acres of irrigated almond orchards to burst into flower for a couple of weeks in February. And with the blossoms came the beekeepers and their insects. Living on Earth’s Emmett FitzGerald took a road trip.

FITZGERALD: Joe Del Bosque and I are driving through the San Joaquin Valley. He’s an almond farmer, and he owns several plots of land scattered around this area.

DEL BOSQUE: I’m not one of those fortunate guys who you know when I came into farming my father had a big farm and just said you’re the new owner. I had to come in and I had to buy parcels and I bought one here and there. 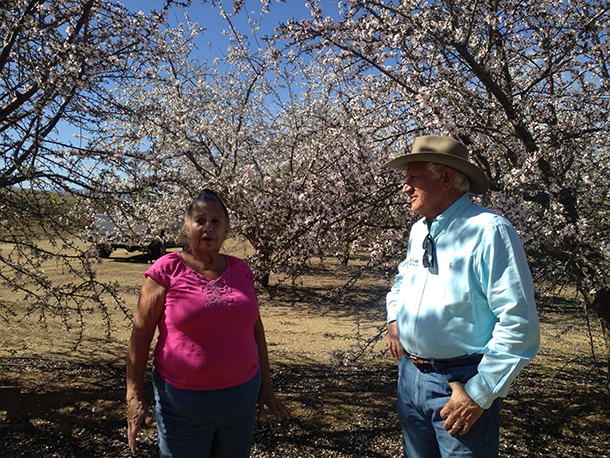 Beekeeper Rosemary Grissom and almond farmer Joe Del Bosque have been working together for over 30 years. (Photo: Emmett Fitzgerald)

FITZGERALD: In fact Joe’s parents were migrant farmworkers from Mexico who eventually settled in the San Joaquin valley. Joe worked as a supervisor on farms for years before deciding to go out on his own. He started off with melons and cotton.

DEL BOSQUE: But after I made money on melons and cotton then I had enough to start investing in these crops.

FITZGERALD: He points to the almond trees on either side of the truck covered in foamy white blossoms.

DEL BOSQUE: You put in a chunk of money to buy trees, buy the drip system, and then you have to wait about four years to get money back.

FITZGERALD: Now Joe has about 660 acres of almonds, and so far, that investment has paid off well. The Central Valley has a perfect climate for almonds, but they need a lot of help. The trees require irrigation 12 months out of the year, which turned them into something a drought villain in many people’s eyes. And during this crucial flowering period, they also need a lot of honeybees. 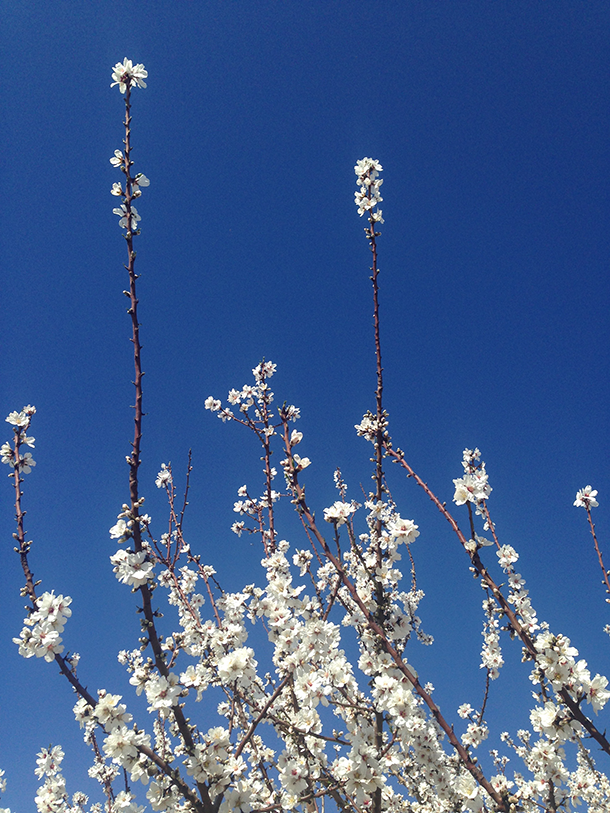 DEL BOSQUE: A lot of crops won’t even make fruit without bees. So our almonds, our melons, those have to be pollinated by bees, they can’t pollinate themselves.

FITZGERALD: And that’s where Rosemary Grissom comes in.

DEL BOSQUE: Hopefully this is Rosemary. It is!

FITZGERALD: A stooped older woman with a weathered face gets out of a pickup truck by the side of the road. Rosemary has been Joe’s beekeeper for over 30 years.

DEL BOSQUE: So Rosemary and I have been working together I think since 1985, yeah.

FITZGERALD: She first got into beekeeping on a whim.

GRISSOM: Our friend needed somebody to help him so they talked my husband and I into helping him. And I was so scared. I wore my suit and taped everything up and looked like… I don’t know what.

FITZGERALD: But she’s been in the business for over 30 years now, and she’s not afraid of bees anymore. 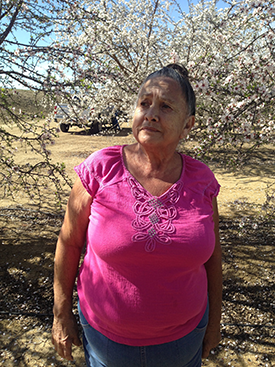 GRISSOM: If you’re a calm person they don’t bother you. You go out there mad or erratic they’re going to get you. One time I was mad, and usually they don’t ever sting me and I had my shorts on and they were stinging me and I thought yeah I’m still mad. As soon as I quit being mad they stopped stinging me.

FITZGERALD: Rosemary’s husband Dale says when they first started he used to get stung all the time.

DALE: But then I don’t know it seemed like we work together with the bees and they calm right now. But you gotta watch sometime buying queens because they sometimes have what I call crazy blood in em, and they’re a real dark bee and boy they can be ornery those can. But these are the light red bees here and they’re real calm.

FITZGERALD: We’re standing next to a cluster of bee boxes stacked at the end of a long row of almond trees. This February Joe rented about 1,500 hives from Rosemary for $180 dollars apiece. When Joe’s trees begin to bloom Dale and Rosemary bring the bees to the orchard in the middle of the night.

GRISSOM: Because in the daytime they’re flying. If you go too early you leave all the bees out here and I don’t think Joe’s people would be too happy.
JOE: You gotta move them when they’re back in their homes.

FITZGERALD: Rosemary and Dale use a forklift to spread the boxes throughout the orchard so the bees can pollinate all of the trees.

There are about 6,500 almond farms in California’s Central Valley, and they produce upwards of 80% of the world’s almonds. There aren’t nearly enough local bees (wild or domesticated) to pollinate all those flowers, so when the almond trees start to bloom, beekeepers from all over the country descend on the Central Valley.

GRISSOM: You can see the trucks coming from out of state. They come from as far as Florida because that’s their bread and butter. The guy right here is from Idaho, my other friend over there is from Arkansas, they come from everywhere, Mississippi…

FITZGERALD: In all over 1,500 beekeepers make the trip, and they bring billions of bees with them. It’s the largest controlled pollination in the world. When the almonds finish blooming, some of these beekeepers will take their hives on to pollinate other crops—cherries in Washington State, squash in Texas, cranberries in Wisconsin. Rosemary says that a lot of people assume that beekeepers make a living from honey, but that actually renting out their bees to farmers is very common. And it’s how she pays the bills.

GRISSOM: The almonds is the bread and butter. The other is just, if you make any honey it’s bonus. 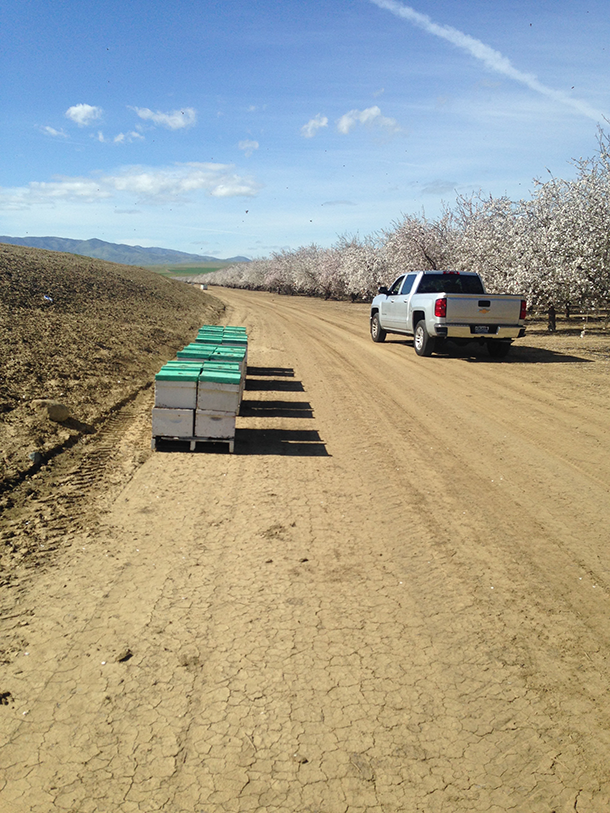 FITZGERALD: But recently beekeepers like Rosemary have been struggling to cope with the widely reported but still mysterious phenomenon known has Colony Collapse Disorder, which has devastated bee populations throughout the country. Rosemary says that every year it seems like one of her friends gets hit.

GRISSOM: Three years ago it was our turn and we had these two yards and there was 240 in each yard, hives, well I went in December and one day this one was gone and that one. It took all of them, they died. You’d go and there would be a queen and like ten bees.

FITZGERALD: Scientists say that disease and parasites have weakened hives, and recent studies have linked bee decline with the use of pesticides called neonicotinoids. Joe Del Bosque says he tries to use products that are friendly to bees and only apply them at night when the insects are in their hive. And whatever he does he gives Rosemary plenty of warning.

DEL BOSQUE: My pest control advisor is in constant communication with her so that she can determine, if we’re using a material that’s not dangerous to bees or if it is dangerous what they need to do. In some cases they cover up the bees in some cases we move them out.

FITZGERALD: For her part, Rosemary says she just has to plan for the worst and create extra hives.

GRISSOM: We just make more bees like this last year instead of making say 500 new ones we made like 800 because you don’t know how many you’re going to lose in the winter. And then sometimes that doesn’t even cover it.

FITZGERALD: So far this year her bees are doing pretty well. After the almond bloom ends, she’ll take them over to pollinate Joe’s melons. As for Joe, he’s going to keep on growing almonds. Prices are low right now, but they’re still a lucrative crop that he’s invested a lot of money into. But the future is less certain. Almonds need a lot of water, and a lot of bees, and both right now are in short supply.

For Living on Earth this is Emmett Fitzgerald in the San Joaquin Valley.

Report on the Impacts of Agriculture on the California Drought