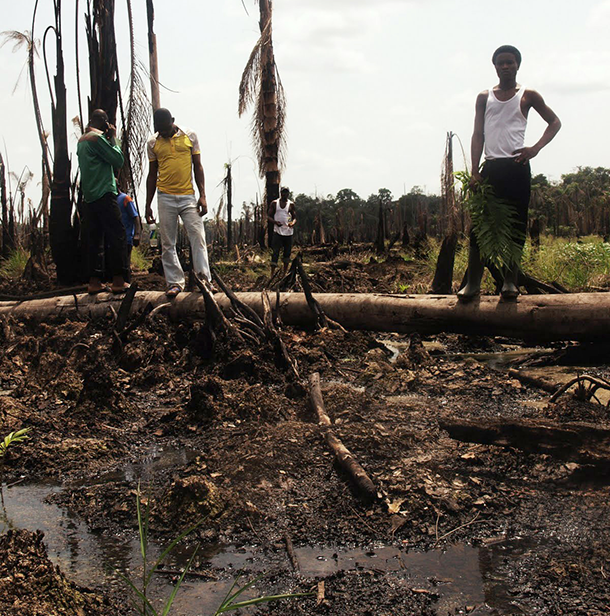 Countless oil spills over decades have destroyed fishing and farmland and turned the once beautiful Niger Delta into a toxic wasteland. Lawyer Daniel Leader is suing Shell Oil in UK courts on behalf of local Nigerian communities, in an effort to clean up the ecosystems where they live. Daniel Leader discusses the lawsuit with host Steve Curwood.

CURWOOD: It’s Living on Earth, I’m Steve Curwood. Environmental campaigners often court trouble when they oppose global companies that want to extract lucrative resources, and there’s no more extreme example than the Niger Delta, where oil companies have drilled since the 1950s. The most famous opponent was Ken Saro-Wiwa, who protested the pollution of Ogoni land by Royal Dutch Shell and other oil giants. Here’s part of a poem the wrote:

SARO-WIWA: Ogoni is the land; the people Ogoni;
The agony of trees dying in ancestral farmlands,
Streams polluting, weeping filth into murky rivers.

CURWOOD: Ken Saro-Wiwa also won the Goldman Prize, posthumously in 1995, after he was tried, convicted and hanged by Nigeria’s military government on trumped-up charges of murder. After his death, his family launched suits that accused Shell of human rights abuses under the US Alien Tort Claims Act. In 2009, Shell settled for over $15 million dollars. Well now Shell is back in court over its environmental record in the Niger Delta, this time both in Holland and the UK, where the parent company of Shell Nigeria is registered. Daniel Leader of the law firm Leigh Day is a litigator for one of the polluted communities affected by massive oil spills, and joins us on the line from London. Welcome to Living on Earth.

LEADER: Thank you very much. 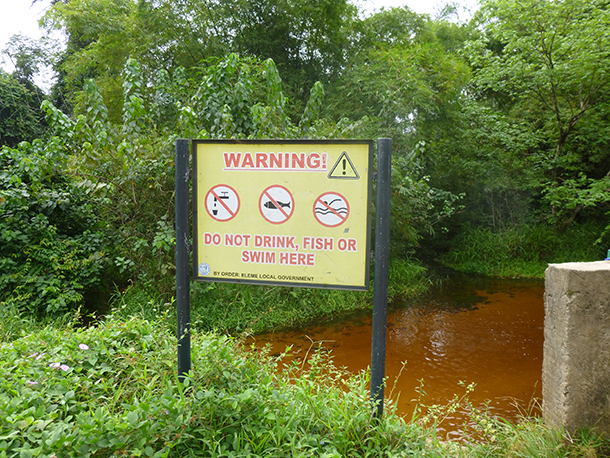 Ogale, Nigeria’s streams are so polluted that it’s not safe to swim in, let alone drink, the water. (Photo: Leigh Day)

CURWOOD: So tell us about these lawsuits that the Nigerian communities have brought against Shell. Who's involved and the basis for it?

LEADER: So, we're bringing these suits on behalf of two different communities that are fairly close to each other, both are outside the oil hub in southern Nigeria, the town of Port Harcourt. One is called the Ogali community and one is called the Bille community. In essence, the complaint of the Ogali community is that they've suffered from 40 different spills over the last 23 years, and that every aspect of their community is polluted. And there are signs that have been erected all over the community saying they can't swim, they can't drink, they can't fish, they can’t farm, and they want Shell to clean up their oil. And to date, there has been no proper cleanup of the spills. So, they have decided to take the case to the English courts against the parent company for the simple reason that they just cannot get justice through the Nigerian system because the Nigerian regulatory system is so weak.

CURWOOD: So, what does the Niger Delta look like and how much has been affected by these oil spills? 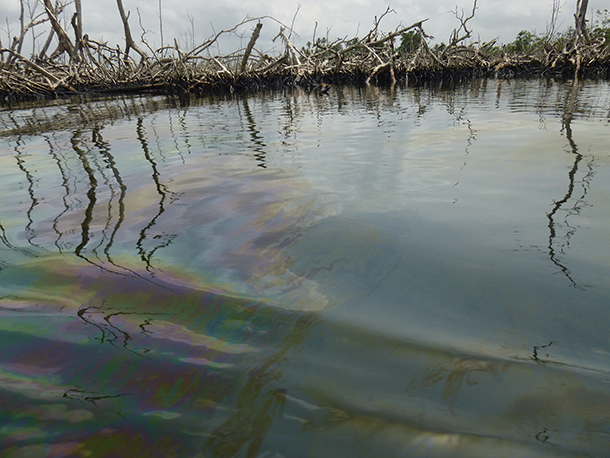 LEADER: The Niger Delta used to be a very beautiful coastline, it was full of mangrove swamps and fishing communities and farming communities and now it is devastated by vast tracts of land which has been completely covered in oil. I think the figure is that the Niger Delta has suffered the equivalent of the Exxon Valdez disaster in terms of the amount of oil that's been spilled every year for the last 50 years, something like 13 million barrels of oil have spilt into the environment in the Niger Delta. And it's a problem that seems to be getting worse, not better.

CURWOOD: So, it's hard to bring back nature. What exactly are you suing for here? What can be done to repair this?

LEADER: Well, things can certainly be done. The oil companies need to start improving the infrastructure, maintaining it so it doesn't leak, and that includes taking measures to protect it against vandals who come in and tap into the line. Secondly, they need to be cleaning up the oil in these communities, which is polluting them so badly. That needs to happen.

CURWOOD: Tell me about the different responsibilities of the Nigerian government here versus Royal Dutch Shell, Shell Oil. My understanding is that Nigeria is the big owner here. 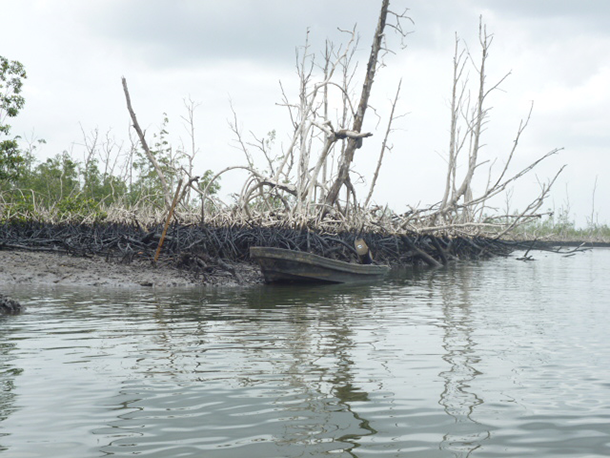 LEADER: The Nigerian government operates a joint venture in which they are the majority shareholder and Shell owns roughly a third of the shares. The joint venture owns the assets, the pipelines, the oil wells, the flow station with the manifolds, but they are operated by different partners in the joint venture. So Shell, will operate one pipeline, Total will operate another. And the law is very clear, if oil spills from your pipeline that you are operating, you are responsible for cleaning it up. It's the ‘polluter pays’ principle and the ‘polluter cleans up’ principle. So we are just simply asking Shell to do what they are required to do under Nigerian law.

CURWOOD: Why have you brought this action in the UK, rather than Nigeria?

LEADER: The real problem is that you can't get justice through the Nigerian system. The courts are very inefficient, they're corrupt. There is no mechanism which will allow for group claims on behalf of many thousands of people who’ve been affected by oil spills. There's not a chance that Shell would be forced to clean up. They would tie the case up in technicalities. It would take 20 years to get through the system, they would argue every point, and it's the kind of thing that they can't do in the legal system here.

CURWOOD: How much in terms of financial compensation are you seeking in the present case? 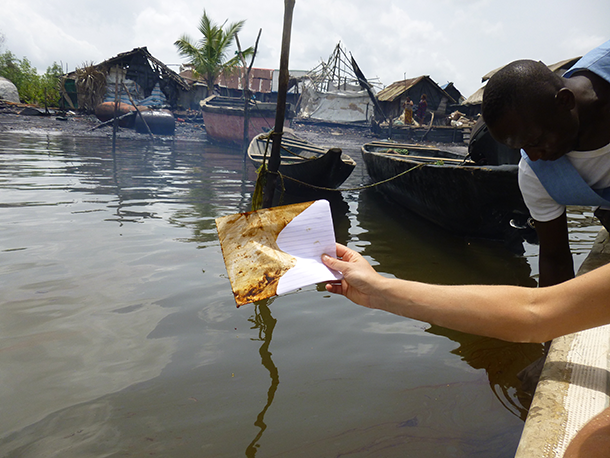 The water in Bille, Nigeria was brown after a recent oil spill. (Photo: Leigh Day)

LEADER: Well, the primary objective is to get Shell to clean up. The clean up costs would be very extensive, they would run into hundreds of millions. On top of that, there is a compensation claim. Our estimates at the moment is that in both cases it will be tens of millions of pounds.

LEADER: Well, the United Nations Environmental Program did a very, very detailed report into pollution in Ogoni land in the Niger Delta area, and they found that there were really catastrophic levels of pollution that the communities were living with and in some cases emergency water needed to be shipped into communities because they were drinking from poisoned wells. The United Nations said, “Look there needs to be comprehensive clean up of these communities, can we agree a way forward with between the oil companies and the Nigerian government?” And that happened in 2011, and since then no one has cleaned up any oil. The communities continue to live in these horrifically polluted environments, and I understand that Ban-Ki Moon personally wrote to the Nigerian president on several occasions insisting that he does something about this, and still nothing. Ultimately, no one wants to stump up the cash, which it's going to take for the clean up of these communities. There's just simply not political will and the oil communities don't want to pay for it either. Which is why we're taking this matter to the courts in the UK because the law is clear - the oil companies have to clean up their oil. We don't need an overarching political process to resolve that issue. Our clients are tired of waiting around for that political process to happen, it's been five years. So, those are saying, “This is the law, these are our communities that are being destroyed by your oil. Clean it up”. 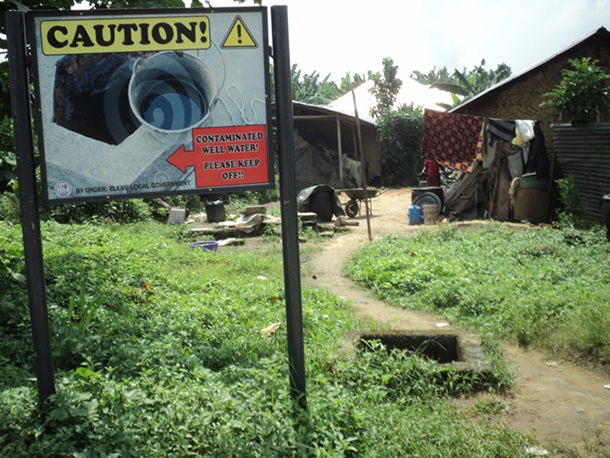 Signs cautioning residents not to use their well water are a frequent sight in Ogale, Nigeria. (photo: Leigh Day)

CURWOOD: Daniel Leader is a partner at Leigh Day and a litigator representative to Nigerian communities against Royal Dutch Shell for oil spills in the Niger Delta. Thanks for taking the time with us today.

LEADER: It's a great pleasure. Thanks for inviting me.

CURWOOD: We called Shell Oil in London asking for comment. A spokesperson said the case should be heard in Nigeria. The full statement is on our website loe.org.

A spokesperson for the Shell Petroleum Development Company of Nigeria (SPDC) said: “We are at an early stage of reviewing the claims made by the Bille and Ogale communities. Both Bille and Ogale are areas heavily impacted by crude oil theft, pipeline sabotage and illegal refining which remain the main sources of pollution across the Niger Delta. Ogale is in Ogoniland and it is important to note that SPDC has produced no oil or gas in Ogoniland since 1993. Access to the area has been limited following a rise in violence, threats to staff and attacks on facilities.

“The Bille and Ogale communities have chosen to bring these claims in the UK instead of in Nigeria, whose laws govern our operations. It is our intention to contest the jurisdiction of the English court over these claims. We believe that allegations concerning Nigerian plaintiffs in dispute with a Nigerian company, over issues which took place within Nigeria, should be heard in Nigeria.”

“Furthermore, Ogoniland is the area covered by the United Nations Environment Programme’s Environmental Assessment (‘the UNEP report’) of 2011. UNEP presented its recommendations as an opportunity to bring a culture of multi-stakeholder cooperation to Ogoniland, a process in which SPDC has been involved. SPDC has also initiated action to address all the recommendations directed to it in the UNEP report as operator of the SPDC Joint Venture. In mid-2015 SPDC JV, along with the government, UNEP and representatives of the Ogoni community, agreed to an 18-month roadmap to fast-track the environmental clean-up and remediation of Ogoniland which includes a governance framework.

“These steps have been widely lauded across civil society in Nigeria and have been welcomed by members of the Ogoni community itself. Asking the English court to intervene and order remediation activity covering the same ground as the UNEP implementation plan is a direct challenge to the internal political acts and decisions of the Nigerian State, and its sovereign right to determine, within its own territory, the appropriate future path for the Ogoni community.”

Other lawsuits faced by Shell for Nigerian oil spills