Where Kasich Stands on Climate Change 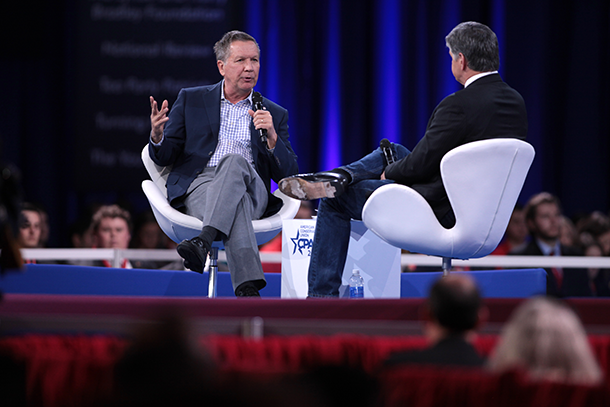 After winning his home state of Ohio, Governor John Kasich remains far behind in the delegate count, but is still in the running, and now holds bargaining chips for the Republican convention in July. At a recent CNN Republican debate Governor John Kasich declared humans contribute to climate change and that reducing emissions can create jobs, and help the economy.

CURWOOD: From the Jennifer and Ted Stanley studios at the University of Massachusetts Boston and PRI, this is Living on Earth. I’m Steve Curwood. Back when contested political conventions were the usual way parties nominated their presidential candidates, states would often send a “favorite son” armed with that delegation’s votes—good for trading, or even winning. Now the old is new; since Ohio Governor John Kasich beat Donald Trump to win his state’s Republican primary he’s gained enough “favorite son” delegates to position himself as a compromise candidate and make it much harder for Mr. Trump to sweep unchallenged to the GOP nomination. As a Republican presidential candidate Mr. Kasich has stood out as the one most likely to take some actions on climate change. Here’s what he said in a recent debate broadcast by CNN.

KASICH: I do believe we contribute to climate change but I don’t think it has to be, you know, either you’re for some environmental stringent rules or, you know, you’re not going to have any jobs. The fact is you can have both. In our state we’ve reduced emissions by 30 percent, and let me tell you also what we’re trying to do. We want all the sources of energy. We want to dig coal but we want to clean it when we burn it. We believe in natural gas, we believe in nuclear power, and you know what else I believe in? I happen to believe in solar energy, wind energy, efficiency. Renewables matter. Now, it doesn't mean because you pursue a policy of being sensitive to the environment, because we don’t know how much humans actually contribute, but it is important we develop renewables. Battery technology can unleash an entirely different world, so the fact is you can have a strong environmental policy at the same time you have strong economic growth. They are not inconsistent with one another.

KASICH: CNN’s Jake Tapper with John Kasich, who benefitted from many Democratic votes to win the Ohio Republican primary.