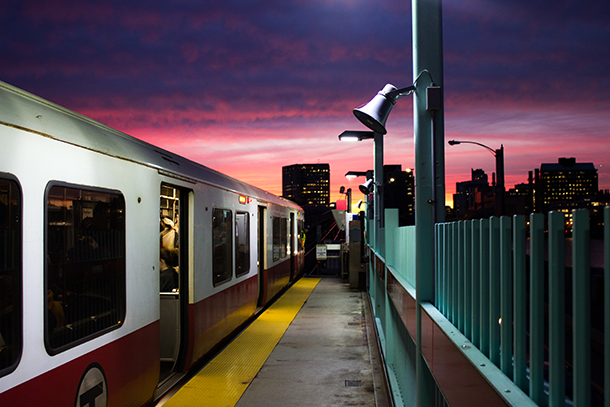 Boston's late night weekend transit service is about to come to a grinding halt, leaving some service workers and other residents wondering how they'll get home after midnight. Living on Earth's Jaime Kaiser spoke with riders and transportation officials about the cutback and has the story.

CURWOOD: When the weekend comes restaurants and clubs stay open late, and that means their service workers have to find a way home well after midnight. New York City runs public transit all night long, but New Jersey Transit and the Metropolitan Boston Transit Authority are now ending key late night services, leaving riders in the lurch. Some 13,000 Boston riders took advantage of the late night service, but the deficit-ridden MBTA Fiscal Management and Control Board says it was too expensive. Living on Earth’s Jaime Kaiser headed underground as one of the very last, late night subway trains left the station and has our report.

JK: Park Street is Boston’s busiest late night station, but only a few people are waiting on the platform at 1:30 on a Sunday morning, and many are less than pleased with late-night changes to the T, as Bostonians call it.

RIDER 1: Well I’m a Chef at Curry College. I’m gonna be greatly affected by the cutback in late-night service because I get out of work at 12:30. The bus is usually there within 20 minutes to get me home, but to take me to walk it’ll be an hour and 40 minutes. It’s so dangerous walking through. People get shot. People die over on Hyde Park Ave, and I have to walk all the way up at night. 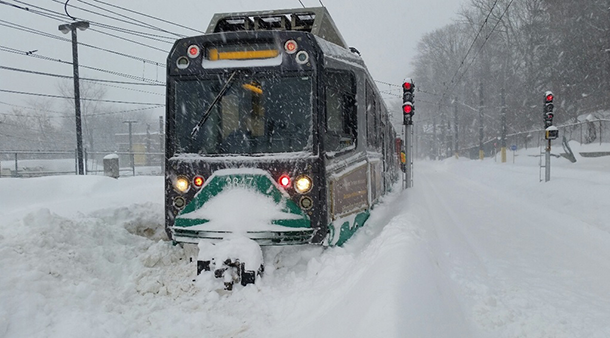 RIDER 2: I think it’s a little frustrating because, for example, I’m coming from my cousin’s place in Brookline right now and if I go to his house in the future now I’ll either have to leave earlier or I’ll have to drive to his place earlier in the evening. It’s just annoying compared to having the T open, you know?

JK: Opinions from T riders like these weren’t enough to dissuade the MBTA from axing the program. Monica Tibbits–Nutt, a member of the MBTA Management and Control Board, explained why the board decided to end the late-night service.

Monica Tibbitts-Nutt serves on the MBTA’s Fiscal and Management Control Board. (Photo: MBTA)

TIBBITS-NUTT: The project did not have metrics established beforehand to say whether it was going to be successful or not, and that’s in general not a way to operate a pilot project. So for me, the way I looked at it, I terminated an operation, not the concept of late-night service but this particular operation.

JK: It was the design that was faulty, she said. The late option didn’t work for many workers who get off after 2:00 A.M., and early-morning trains are perhaps just as necessary for low-income workers. But whatever the design, the MBTA’s in trouble. The Federal Transportation Administration – the FTA – wrote to them telling them to complete the equity analysis. It’s a federal regulation that says local transit systems must assess whether major service changes will disproportionately impact minority or low-income riders. The T began that analysis and preliminary data suggested that the cuts would indeed affect low-income riders, but that report was never completed.

JK: Advocates say the MBTA should take account of low-income workers in its planning. Rafael Mares is the Vice President of the Conservation Law Foundation.

MARES: I think the stereotype about late night service is that it exists for students who are drunk and can’t drive home but the reality however, is that it is, for late shift workers, the way for them to get home, and therefore really important. 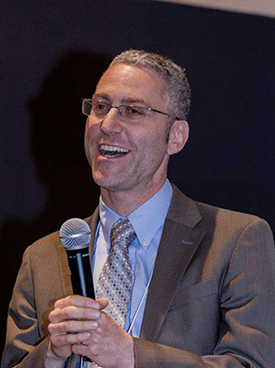 JK5: Until the MBTA completes the analysis it’s difficult to measure the scope of the problem. Some late-night workers are undocumented, and many have limited English. But we did hear from a man we’ll call Luis, a long-time, late-night chef from El Salvador who had enormous problems trying to getting home without late night service. He sent a written account, and we’ve translated his words.

LUIS: Finally I saved up and bought a moped. A few months later a car hit me, and I ended up in the hospital, then in rehab, then a surgery. The vertigo was bad, and I couldn’t work. Then more weeks of outpatient rehabilitation. Then the moped’s lock was cut, and it was stolen, so I got a bicycle. Actually several bicycles, one at a time, as each one was stolen from work. It was hard to peddle 10 miles after my double shift in the kitchen, so I bought another moped. One night it was snowing when I left work, an unexpected storm, and my moped skidded into a fall. This time I was out of work for a few months with a broken leg, surgery, and physical therapy. Finally my wife and I moved to a new town with a lot of restaurants, where I could walk to work.

JK: And when people have to find alternatives to public transit, the climate suffers too. Rafael Mares from the Conservation Law Foundation again.

MARES: The greatest greenhouse-gas emissions come from the transportation sector. In Massachusetts it’s almost 40% of our greenhouse gas emissions. As a result it’s really important that we have a transportation system that allows people to get around in ways that doesn’t require driving.

JK: Boston announced the late-night service back in 2014 with great fanfare, claiming the change would put the T on par with international cities like Paris and Moscow. Now, Monica Tibbits-Nutt says the MBTA has higher priorities like upgrading its defective, 100 year-old signal system and countless repairs. Perhaps that will help the system cope with the kind of snowstorms that last winter often brought the T to a grinding halt.

For Living on Earth, I’m Jaime Kaiser in downtown Boston.

About Rafael Mares of the Conservation Law Foundation