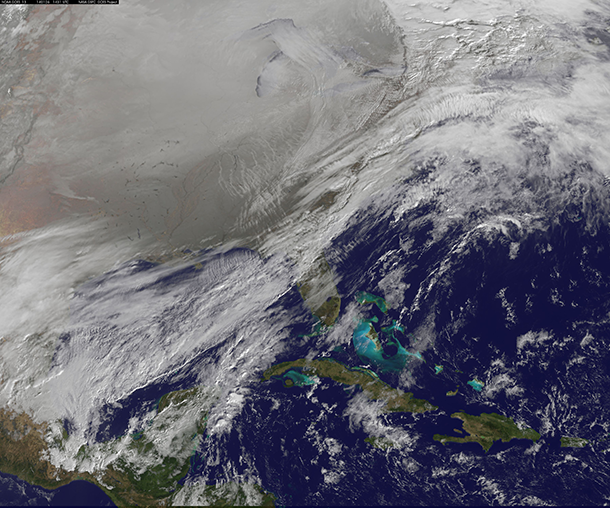 Image of eastern North America captured by NOAA’s GOES-East satellite on January 6, 2014. A frontal system that brought rain to the coast is draped from north to south along the U.S. East Coast. Behind the front lies the clearer skies and bitter cold air associated with the polar vortex. (Photo: NASA Goddard Space Flight Center, Flickr CC BY 2.0)

Scientists can spot global climatic changes by tracing slight variations in the isotopes in water molecules. Researcher Myron Mitchell tells host Steve Curwood how his team analyzed the water from the Hubbard Brook research station to show that the Arctic is now sending the Northeast more water than in recent history, especially snow when it comes to snow. This reinforces a theory of Rutgers climate scientist Jennifer Francis that links loss of arctic sea-ice with colder winters in the Northeast.

CURWOOD: We call it “global warming,” and in many places, average temperatures are increasing, yet in other places a changing climate can mean colder weather. Jennifer Francis, a climate researcher at Rutgers University, was the first to suggest a link between the loss of Arctic sea ice and colder winters in parts of the Northern Hemisphere. She described her hypothesis to Living on Earth back in 2014.

FRANCIS: There's only about half as much sea ice coverage in the Arctic now as there was only 30 years ago. It's just been disappearing at an amazing rate. One of those regions where the ice is disappearing the fastest is just north of Scandinavia and western Russia, an area called the Barents-Kara Sea area. What we're learning about this area is that it's very important for the atmosphere.
When we lose that ice there, the dark ocean underneath during the summertime absorbs a lot of extra energy from the sun, and so that water warms up a lot more than it used to. When fall comes along and the cold air starts to move in again, all that energy that was absorbed through the summer in that region then gets re-emitted back to the atmosphere, and that causes the air above this region to warm up a lot.

This has the effect of actually bulging the jetstream northward. The jetstream is this fast-moving river of air, high over our heads, that generates the weather that we experience down here on the surface, and when it is forced to bulge northward like that it compensates by bulging southward just downstream, which would be to the east. When that happens, it allows the cold air from the Arctic to plunge farther south, and so what we're seeing is, during summers when there's less ice than normal in this Barents-Kara Sea area we're finding the jet stream taking this wavier path with the bulge up north of Scandinavia and then a big dip south over Asia allowing that cold air to plunge southward and creating those colder winters. 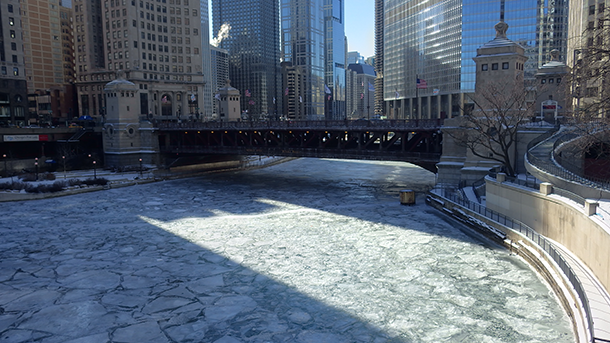 When the Arctic Vortex descended over the eastern half of North America in January 2014, the weather system brought such cold air that it froze the Chicago River. (Photo: Sean Benham, Flickr CC BY-NC-ND 2.0)

CURWOOD: Now there’s new evidence to support this hypothesis of Jennifer Francis, in a study that drew on more than forty years of water samples taken at the Hubbard Brook Experimental Forest in New Hampshire. Using isotopes of the different elements of water as fingerprints, scientists were able to determine much of the precipitation in snowy years in that New Hampshire forest had arctic origins. Myron Mitchell is one of the study co-authors and joins us now from Syracuse, New York. Myron, welcome to Living on Earth.

MITCHELL: Thank you for having me.

CURWOOD: So, let's do a little basic chemistry here. What is an isotope and what isotopes are particularly useful in studying water?

MITCHELL: Sure. So almost all elements have different isotopes, and for water, the two major elements of water are hydrogen and oxygen. All elements within the nucleus have two subatomic particles, neutrons and protons, and they also have electrons which circle the nucleus. And the number of protons in the element stays the same, but the number of neutrons can change and the water molecule can vary with respect to the hydrogen isotopes and the oxygen isotopes. For instance, for hydrogen they have hydrogen one which just has a single proton. You can also have hydrogen two which has a proton and a neutron, and then you have oxygen 16, and you have oxygen 18 which has two more neutrons which makes it a little bit heavier.

CURWOOD: So when you look at the different isotopes that make up the hydrogen and oxygen and water, you're able to tell where water has been and where it's gone, I gather.

MITCHELL: To a certain degree. It's not a completely simple story, but it does give us some ideas. For instance, the water that comes from the Arctic Ocean is going to have a different isotopic value than the water comes from the Southern Atlantic. These differences don't affect the chemistry of water but they actually can be used as a tracer, giving us information of where the water comes from. But we also do some back projectory modeling, the model developed from NOAA, and we use these models to backtrack where the precipitation that came to Hubbard Brook, did it come from the Arctic? Did it come from the northern Atlantic? Did it come from the southern Atlantic? And we found there was a good correspondence between those modeled analyses using mathematical models and our actual measurements.

CURWOOD: Now, talk a little bit more about your detective work here. Why are there different isotopes different places on Earth? 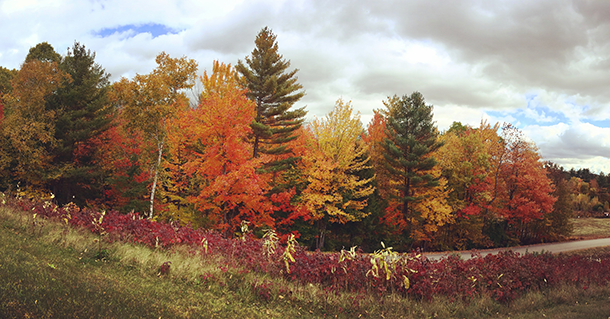 MITCHELL: It has to do with, there are certain physical processes which result in some small discrimination of a wider isotope versus the heavier isotope. An easy example would be, let's say you have some water which is sitting in a container, and you warm that water. The water that comes off of that container is evaporated, and the evaporated water has a little bit lighter isotopes than the water which remains within the container. So therefore evaporation is one process which results in a change in the isotopic value of water. So what's happening as the Arctic Ocean has increased in temperature, also increased in size because of the absence of ice, we're getting more evaporation from the water associated with the Arctic, and that's contributing to the water coming down into the northeast United States and elsewhere. So it's changing the weather patterns, and as it changes the weather patterns we can see where the water that comes from the vortex is affecting the precipitation amounts in the northeast United States.

CURWOOD: Now, how important is the Hubbard Brook experimental forest to all of this research?

MITCHELL: It's very important because it is a research station which started in the 1950s, and, therefore, developed a very long-term record of environmental change. It was one of the first places in the United States in which acid rain was determined. And it's particularly unique in that, not only have samples been collected for long periods of time at Hubbard Brook, but also these samples have been stored in an archive so people can go look at these samples and use these samples for helping to understand how things have changed over time.

CURWOOD: So, where do you go next with doing research on the distribution of water isotopes? 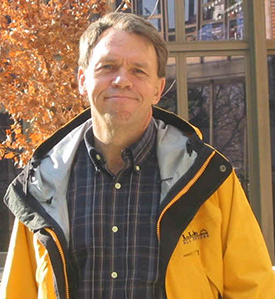 Myron Mitchell is a Distinguished Professor Emeritus at the State University of New York’s College of Environmental Science and Forestry in Syracuse, New York. (Photo: courtesy of Myron Mitchell)

CURWOOD: What could that tell you?

MITCHELL: That would allow us to look at trees over a larger area where we don't have this very intensive precipitation record, and we could actually do extrapolation and see how things are varying over time and across areas of the region, and maybe even beyond our region to other regions as well.

CURWOOD: Myron Mitchell is a distinguished professor at the College of Environmental Science and Forestry at the State University of New York in Syracuse. Thank you so much, Professor.


Nature Paper: “Arctic Vortex changes alter the sources and isotopic values of precipitation in northeastern US”

What is an isotope?