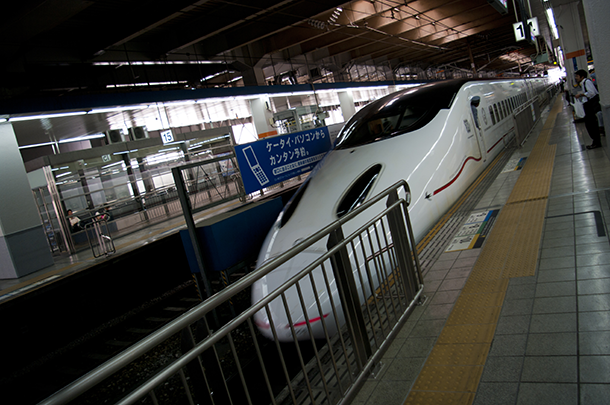 Japan’s high-speed rail trains were ranked by the travel website GoEuro as the best in the world. (Photo: Martyn Jones, Flickr CC BY-NC-ND 2.0)

Peter Dykstra’s weekly round-up with host Steve Curwood discusses the US lag in high-speed rail system development, the decline in workplace deaths over the past few decades, and how famed crime boss “Lucky” Luciano was never convicted of murder, but fined for one death he caused--by shooting a pheasant out of season.

CURWOOD: Let’s join Peter Dykstra of Environmental Health News, EHN.org and DailyClimate.org to go beyond the headlines now. Peter’s on the line from Conyers, Georgia. Hi there, Peter.

DYKSTRA: Hi, Steve, when it comes to high-speed rail service, the US is number – er -- 19. In a recent study of 20 nations’ high-speed rail resources the US finished 19th, behind Turkey and Uzbekistan and quite a few other nations. You know Amtrak’s Acela service in the Northeast is our only example of high-speed, and it’s on the low-end of high-speed, which is usually defined as 150 MPH travel on a consistent basis.

CURWOOD: Given the state of passenger rail here in America, that’s not that surprising. Hey, who’s number one?

DYKSTRA: Number one is Japan, followed by South Korea, China, France and Spain. Compare the high-speed trains from Beijing to Shanghai, a little over five hours for an 800-mile trip with about 35 trains a day and the cheapest ticket is $86 US. If you try that same distance here, New York to Atlanta, it’s $147, it takes fifteen hours, and there’s only one train a day.

CURWOOD: Well that’s kind of embarrassing but in the current state of politics here I don’t see it changing anytime soon.

DYKSTRA: Except maybe for one change for the worse. The only high-speed project in development right now would run from San Diego and LA to San Francisco and Sacramento. It’s losing support due to cost overruns, and now a proposed statewide ballot initiative would drain billions in rail funding to fill reservoirs for farmers by building bigger dams.

CURWOOD: Well anything for more water is going to get a vote in California, Hey, what do you have next for us? 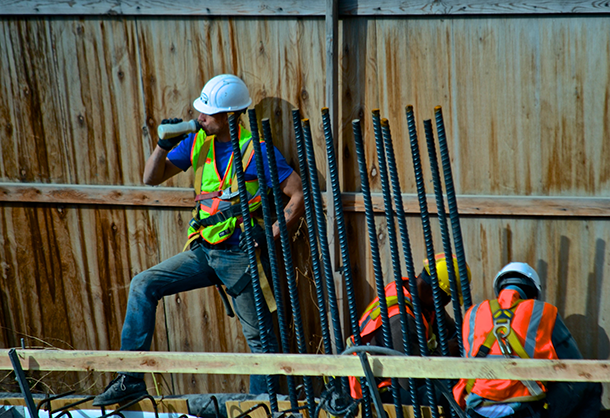 Fewer than 13 workplace deaths happen every day in the United States, a dramatic decrease from 38 per day in 1970. (Photo: David McSpadden, Flickr CC BY 2.0)

DYKSTRA: I’ve got a bit of good news on the chemical safety front. Workplace deaths in the U.S. have taken a big fall, from about 38 workers a day in 1970, to less than 13 per day last year according to the Bureau of Labor Statistics. Deaths linked to exposure to toxic substances have seen a similar drought, but that’s not the whole picture. The AFL-CIO publishes an annual study called “Death on the Job,” and it concludes that 150 people a day die from the long-term consequences of hazardous working conditions.

CURWOOD: So must be things like lung diseases, toxic chemical exposure, and more?

DYKSTRA: Right, the AFL-CIO report also lists fatalities by state, with North Dakota as the deadliest place to work. Steve, you’ll be pleased to know that Massachusetts consistently ranks as one of the safest states to work in.

CURWOOD: Well, we have no oil refineries here or big mines though we do have a nuclear power plant and fishing is always risky. Still, we’ve never lost an employee at Living on Earth. Hey, what how about your state, Georgia?

DYKSTRA: I didn’t look to see where Georgia was and I really don’t want to know, because we usually make the low end of the top fifty in most things.

CURWOOD: Except maybe home cooking. Hey what do you have in the history vaults for us? 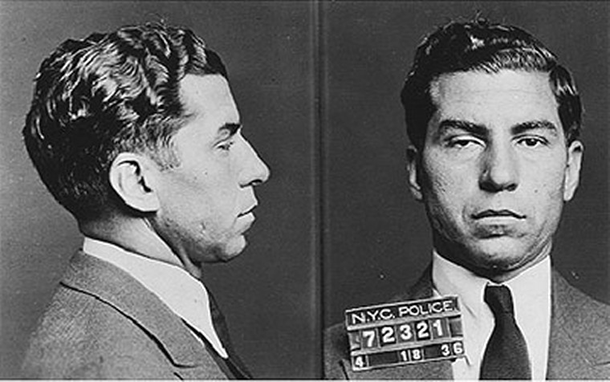 CURWOOD: Well this ought to be interesting.

DYKSTRA: Luciano helped put the “organized” in organized crime by bringing rival crime families together to cooperate rather than just keep killing each other off. But in the meantime, Luciano and his crew were widely suspected of killing scores, if not hundreds, of rival gangsters, loan sharks, pimps, bootleggers, dealers, button men, jamokes and wise guys.

CURWOOD: And where does the environment come into this?

DYKSTRA: Well here it is. Despite being one of the most feared men in a bloodthirsty empire, there was only one killing that Lucky Luciano ever paid the price for. During this week in 1929, Lucky carried out a hit on a ring-necked pheasant in upstate New York, and was promptly arrested and fined $50 for hunting out of season. This is according to the book “Boardwalk Gangster” by Tom Newark.

CURWOOD: So I guess both Mr. Luciano and the pheasant were unlucky that day.

DYKSTRA: Thanks a lot Steve, Talk to you soon.

CURWOOD: And there’s more on these stories at our website, loe dot org.

Grist: “The U.S. is just pathetic on high-speed rail”

Boston Globe: “Chemical exposure deaths on the job getting rarer”