Clearing The View For The Grand Canyon 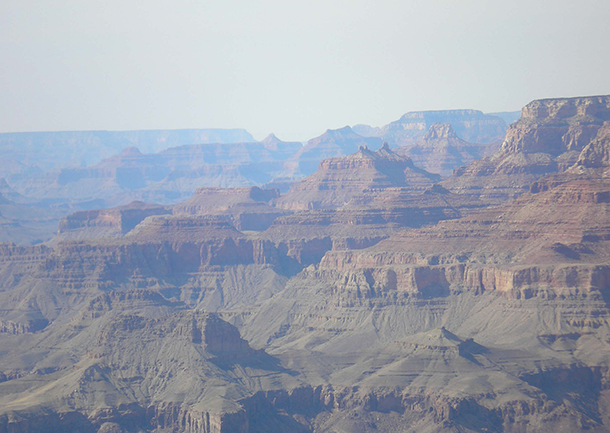 Cement plants are big air polluters and in 2009 industrial giant Cemex wanted to build a new plant near the Grand Canyon, causing concern about increasing the haze that already plagues the national park. We revisit a report by Arizona Public Radio’s Laurel Morales, and host Steve Curwood catches up on the story with environmental engineer Bill Auberle who discusses current threats facing the iconic attraction and hopeful signs for its future.

CURWOOD: Here at Living on Earth, we believe Earth day should be celebrated for the entire month of April, and we’ve made a point of revisiting some stories from years past to find out what’s happened. Today, we’re heading out west to one of the glories of our National Park System, the Grand Canyon. Back in 2009, we broadcast a story detailing plans by cement giant Cemex to build a new kiln just 50 miles upwind from the Grand Canyon – plans that were raising concern about the dust and pollution from the plant that could harm that icon. Here’s part of that report from Laurel Morales of Arizona Public Radio.

MORALES: For 18 years it’s been Carl Bowman’s job to guard the 100-mile view at Grand Canyon. He leans over what looks like a large telescope to check the day’s visibility on an air monitor.

BOWMAN: On our very best days you know those days that just take your breath away you look across the north rim’s 10 miles away. The colors over there are bright. The shadows and textures are nice and crisp. 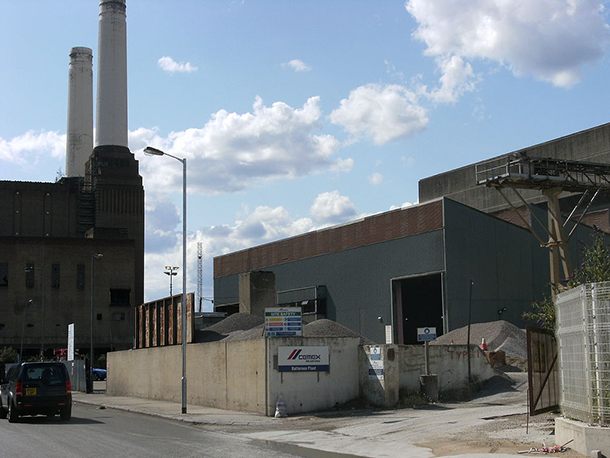 A proposed Cemex cement plant was rejected after many foresaw the hazy Grand Canyon views it might create if approved for operation in nearby Seligman, Arizona. (Photo: Mark Ahsmann, Wikimedia Commons CC BY-SA 3.0)

MORALES: Nearby tourists pose for pictures at the popular overlook and take in the glorious crags, cliffs and brilliant red rocks in every hue.

BOWMAN: It feels almost like you can reach out and touch it. But as the haze starts to build up the colors start to get muted the textures flatten out. On those haziest days you can look across and see the north rim but what you’re seeing is just this looming blue mass on the other side of the Grand Canyon.

MORALES: Weather, wind direction and smog blown in from as far away as Los Angeles and Mexico can each affect the view. Bowman says the view has noticeably improved over the last two decades thanks to the Clean Air Act. The law forced two power plants that flanked the Canyon to make big changes. One installed expensive scrubbers; the other closed. But the proposed cement plant could be a step backwards.

BOWMAN: Any time there’s a proposal for a new facility close to the park, of course we’re concerned, because when we look at the pollution problems that we see within the park most are caused by air pollutants that are actually generated upwind from us. 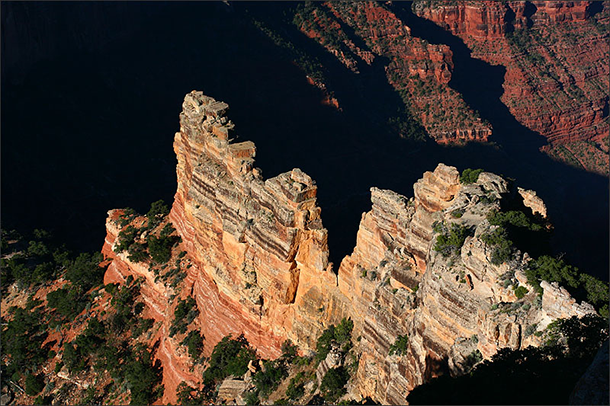 Some of Bill Auberle’s favorite camping spots are located on the North Rim of the Canyon. (Photo: Stacy Egan, Flickr CC BY 2.0)

AUBERLE: My concern is this that the Clean Air Act of the United States says that no man-made air pollution shall impair visibility at the Grand Canyon National Park and other parks. Zero! We’re not to be fouling the air at Grand Canyon.

CURWOOD: Well, it was seven years ago that Laurel Morales reported that story, and we were interested to know what happened, so we called up Bill Auberle again. He’s retired from teaching at the university but still works as an environmental engineer and keeps a keen eye on the canyon. Welcome back, Mr. Auberle.

AUBERLE: Thank you very much. It's good to be back.

CURWOOD: So what happened with Cemex?

AUBERLE: Cemex withdrew their permit to build near the Grand Canyon, in part because of the environmental threat and perhaps because of the economy at the time. Alternatively, a new plant was built more distant from the canyon in which Cemex has an interest so their demand for Portland cement was met, but in a way that was much less intrusive on the canyon.

CURWOOD: So, what's the air quality like at the canyon now? We heard Laurel's piece about the careful air quality records being kept by the park authorities. 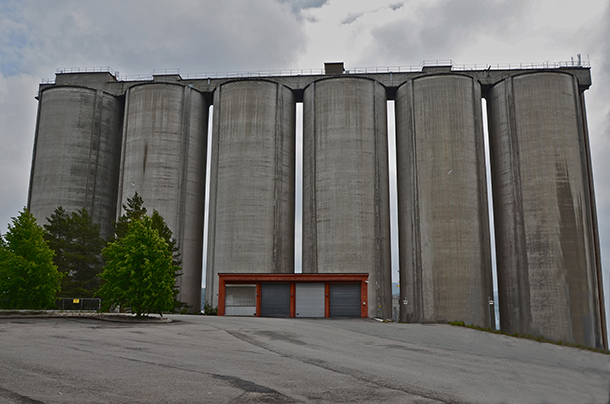 AUBERLE: Yes, the National Park Service has records of air quality at the Grand Canyon for several decades and some of those measurements continue, but not all of them, and unfortunately one of them that no longer continues is visibility at the Canyon which is one of the most precious resources. Visitors expect to see the splendor of the visibility across the many miles of the canyon, and that's no longer measured in terms of visual range. What is measured are gases and microscopic particles at the Canyon so we have indicators of air quality, but we don't have a good measurement of visibility, for example.

CURWOOD: It's been a little while since I've been to the Canyon, but there's a fair amount of haze there still, I think.

AUBERLE: There is persistent haze at the Canyon, and that's born out by these indicators that are continued be measured in the air quality system at Grand Canyon National Park. It is also born out by visual observations of the five million visitors plus each year that unfortunately often experience haze at Grand Canyon.

CURWOOD: So, looking ahead, what's the outlook for air quality there?

AUBERLE: I'm cautiously optimistic about the future of protecting air quality in the region. We are producing and requiring ever-cleaner motor vehicles, automobiles, and the like. We also have secured long-term commitments from industries in the region. Copper smelters, coal-fired power plants and other manufacturing activities and in coming years - and admittedly in some cases a couple of decades - we will see those sources significantly cleaned up or retired and the Canyon and its air quality will be the beneficiary.

CURWOOD: Now, what about the other environmental threats to the Grand Canyon? What remain today?

AUBERLE: Fortunately or unfortunately, the Canyon is located in the region of the Southwest where there are a great many important natural resources ranging from the largest Ponderosa pine forests in the southwest United States where logging is exceedingly important industry to underground resources of uranium, limestone, other precious metals and water, which of course is very dear to those of us in the southwest.

CURWOOD: Well, there's been a significant drought in Arizona for, what, how long? 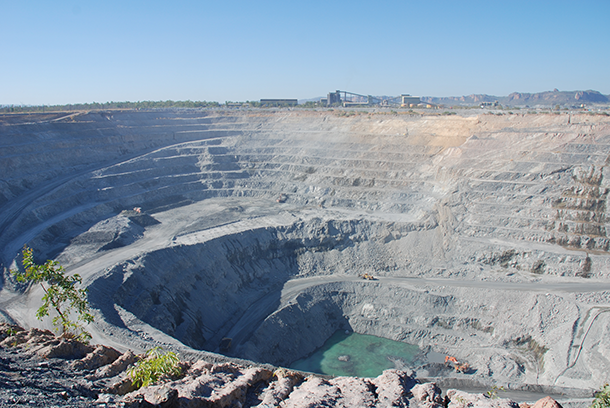 Uranium mines are another industrial activity that poses a threat to the Canyon (Photo: Alberto Otero García, Wikimedia Commons CC BY 2.0)

AUBERLE: Well, the current drought goes well back into the 1990s and seems to be never-ending with sporadic years occasionally when it gets a little more moist. But in general this long-term drought persists and appears to be going to continue to persist according to the meteorologists and the climatologists. And with climate change we will become even drier than we are today.

CURWOOD: So what does that mean, that lack of water in the region?

AUBERLE: Well, it has a great many impacts on the ecosystem of the region as you can appreciate. The surface streams, the flow in surface streams, is getting lower and lower. The rain and snow that replenish our groundwater from which we get much of our potable water in the region, the groundwater elevations are going down as we continue to pump that more and more for human needs, and clearly that will come to an end at some point just because there's not enough water.

CURWOOD: I understand that there's some mining that goes on there. Uranium and and other things and I guess an interest in increasing that mining.

AUBERLE: Yes, these important natural resources continue to be mined. We have active uranium mining in the region, that's been going on for many many years. It's an important part of economy. But no new mining is being permitted, there's a moratorium in place that precludes additional uranium mining until a much broader assessment is done of the environmental threats to the Canyon.

CURWOOD: Now, there's some conservationists who would like to see the area around the Grand Canyon protected as a national monument. What you think of that idea?

AUBERLE: Yes, indeed. There's a bill in Congress to encourage the president to establish a new Grand Canyon national monument that would encompass much of the region around the Grand Canyon. I think monument designation has a great deal of merit so long as current uses of the area are allowed to continue under monument designation, such as camping, hiking, hunting, and fishing. They're very important outdoor activities in the region. And the good thing about the Antiquities Act allows the president to create a national the monument is it allows for flexibility as to what this continued usage can be.

CURWOOD: So you been going to the Canyon for several decades. How's your sense of wonder when you see it each time?

AUBERLE: The Grand Canyon is a wonder of the world. It's also a wonder, I think, to the human heart and it certainly is to me. It's just an incredible experience and I can only hope that the five million visitors a year to the park have a similar heartfelt feeling about this incredible place that I've experienced nowhere else in the world.

CURWOOD: Bill Auberle is an environmental engineer in Flagstaff, Arizona. Thanks much for the time with us today, Bill.

AUBERLE: You're quite welcome. Glad to do it.

Map of the Grand Canyon