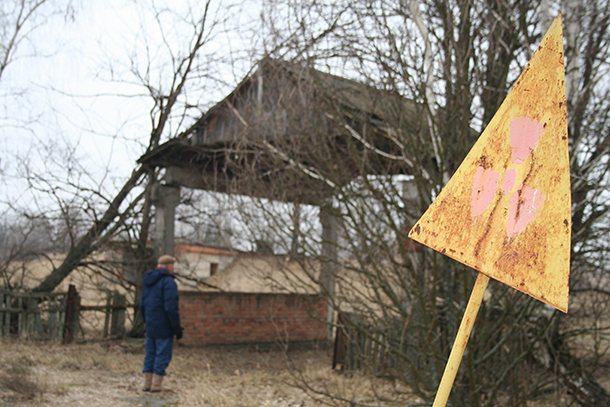 Three decades after the world’s worst nuclear power plant disaster, radiation levels in the town of Pripyat near Chernobyl have dropped. But when Living on Earth’s Bruce Gellerman went to Chernobyl ten years after the disaster, it was a different story. We revisit his report.

CURWOOD: It’s Living on Earth, and I’m Steve Curwood. Thirty years ago, on April 26th 1986 at 1:23 a.m., local time, a steam explosion at the number 4 reactor at the Chernobyl plant in the Ukraine led to the worst ever nuclear power plant accident. With its cooling water gone the graphite core of the Soviet reactor ignited and the uranium fuel rods vaporized, sending a plume of radioactivity high into the atmosphere.

Soviet officials said nothing for nearly 2 days, then Swedish authorities detected the radiation and Russian TV news made a short announcement:

[SFX - Russian newscast: "An accident has happened at the Chernobyl Nuclear Power Plant. One reactor has been damaged. The government has formed a commission of inquiry.]

CURWOOD: The delay meant the workers and their families who lived in the city of Pripyat just nine miles from the plant received high doses of dangerous radiation, before the order came to evacuate.

[SFX - Announcement in Russian: "Attention, attention, dear comrades, to insure your safety and especially the safety of your children it is necessary to temporarily evacuate the city and surrounding areas in the Kiev region…"] 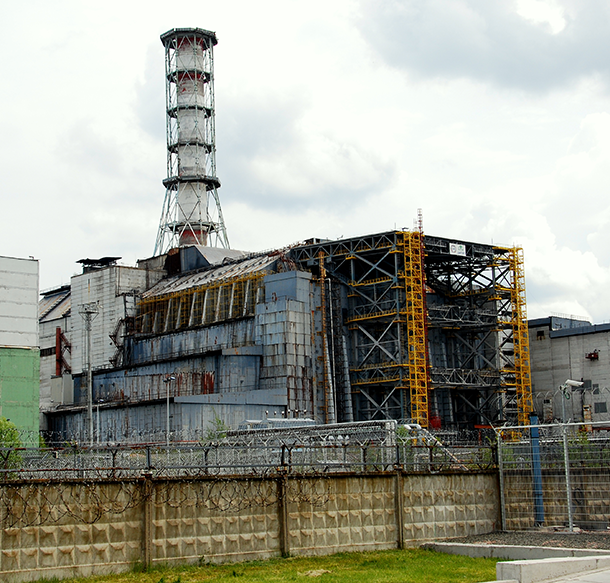 CURWOOD: What was initially billed as a three day evacuation has lasted 30 years, and Pripyat today is a derelict ghost town, still off-limits to most people, though it’s a popular tourist destination now, as the radiation levels from decay elements of Strontium 90 and Cesium 137 have dropped as they reach their half-lives. But when Living on Earth’s Bruce Gellerman first visited on the 10th anniversary of the disaster it was a different tale – here’s part of his report.

[SOUND EFFECTS OF THE ROAD]

GELLERMAN: It’s a 2-hour drive from Kiev to Chernobyl along rolling hills and peat bogs. Ukrainians say that the soil here is so rich that you can eat it, at least that’s what they used to say. Today a thousand square miles around the plant is off limits to most people.

GELLERMAN: 18 miles from Chernobyl, we enter the exclusion zone. My driver Pietro is quiet as we enter the zone past empty farms, homes, churches and schools. A week after the disaster, 135,000 people were permanently removed from this area.

TRANSLATION: It is our tragedy. This was a very good place to live, what can we do? This is our fate.

GELLERMAN: To visit Chernobyl requires special permission and an official guide. We are joined by a plant technician who will monitor radiation levels - he sees the look in my eyes. 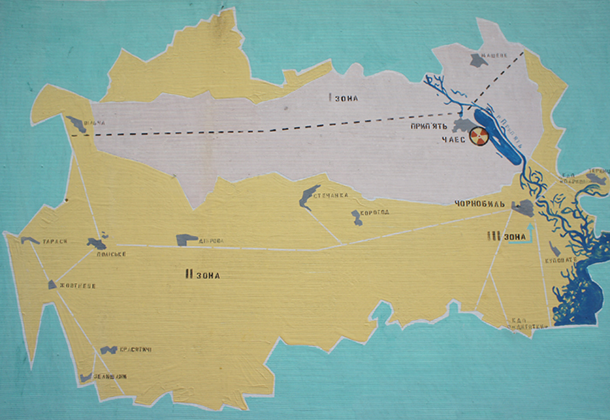 GELLERMAN: A faded mural on a vacant apartment building welcomes us to Pripyat, the town was once home to 45,000 residents - plant workers and their families. The sign reads: The party of Lenin leads us to a Communist victory. My guide Alexander Shevchenko deadpans an old party slogan: The people of Pripyat really did invite the friendly atom into their homes. He laughs alone in the silence.

GELLERMAN: But for our Geiger counter, the apartments are ghostly quiet. Plant officials delayed the evacuation of Pripyat by a day and a half. By then, Alexander says, the clouds of radioactive iodine had delivered intense doses to the town’s children.

GELLERMAN: Why did they wait 36 hours before they evacuated?

GELLERMAN: The radiation readings jump as we pass the remains of a contaminated forest buried in a field. It’s a two-mile ride from Pripyat to the plant. Chernobyl dominates the desolate marshland. It’s a white, windowless monolith - a mile long and nearly a football field high.

[SOUNDS OF PEOPLE GETTING OUT OF THE CAR] 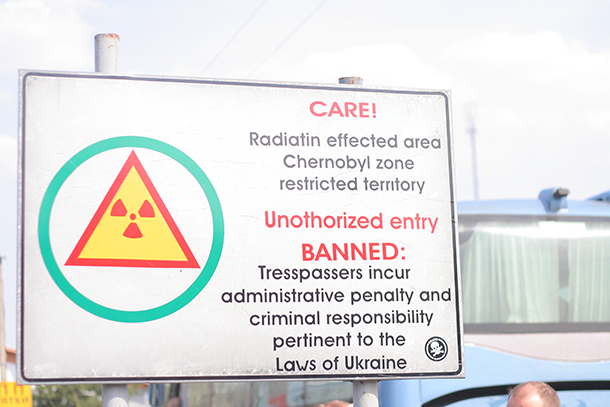 GELLERMAN: We’re standing at Ground Zero. Today, what remains of the melted number four reactor is entombed in a massive 24-story sarcophagus. But even 300,000 tons of steel and concrete can’t contain the intense radiation within.

GELLERMAN: The levels on our Geiger counter double when point it at the sarcophagus - it’s the most radioactive building on the planet. The amount of radiation released at Chernobyl was 250 times that of the atomic bombs dropped on Hiroshima and Nagasaki combined. After a minute here, Alexander wants to leave this place.

SHEVCHENKO: We better get back to the car?

SHEVCHENKO: Because it’s rather high. You know, I‘ve been inside the sarcophagus is four times.

CURWOOD: That was Alexander Shevchenko, who acted as a translator for Living on Earth’s Bruce Gellerman when he reported from the wrecked Chernobyl plant in 1996, just ten years after the disaster.