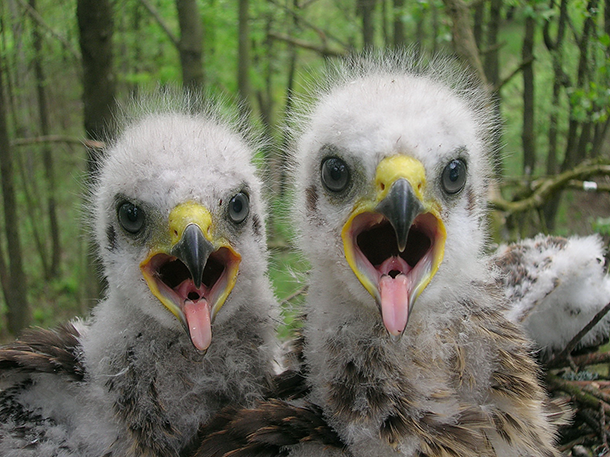 Host Steve Curwood speaks with Portsmouth University environmental scientist Jim Smith, who offers his perspective on the health of insect and mammal populations inside the Chernobyl exclusion zone where radiation levels vary from place to place, and where plans for the future are uncertain.

CURWOOD: It’s 30 years on now, and though nobody lives in the crumbling apartment buildings in Pripyat, thousands continue to work at the wrecked plant to maintain its safety. And since the disaster, plenty of research is being carried out on the continuing effects of the catastrophe. Among those researchers is James Smith, professor of Environmental Science at Portsmouth University in the UK.

SMITH: I first went there in 1994 and at the time we were studying the transfer of radioactivity in aquatic ecosystems, so in lakes and rivers around the zone and around the power station, and we were looking at how the radioactivity got into the rivers and lakes, how long it was going to be there, and how it got taken up by the aquatic food chains.

CURWOOD: So how much in the way of contamination did you find in those early years?

SMITH: So in the first few weeks and months after the accident the radioactivity in the rivers and lakes went down very quickly because a lot of the radio nucleides, a lot of them decayed very quickly after the environment, but radio cesium which is the one that we're all worried about at the moment because it has a 30-year half-life - it's around in the environment for a long time - that accumulates in the aquatic food chain. So broadly what we've found after Chernobyl was what people had seen after the nuclear weapons testing was this high bioaccumulation of radioactive cesium, not just in fish, but in many foodstuffs.

CURWOOD: And what else did you look at in terms of organisms?

SMITH: We've looked at aquatic insects. So we did a study together with some biologist colleagues of mine to look at the communities of what we call invertebrates, so little insects that live in the sentiments of these lakes...how are they faring after the big radioactive release?

CURWOOD: So I'd have to ask you...are the bugs being bugged?

SMITH: Apparently not. We studied eight lakes of different levels of contamination. So some of them near natural background radiation levels and up to a lake called Glubokoye which is most contaminated lake we studied at Chernobyl and we didn't find any difference in the aquatic insects in the different likes and in fact Glubokoye, it wasn't statistically significant but it did have the highest diversity and abundance of aquatic insects.

CURWOOD: Hmmmm, interesting, Now, you continue to go back. How aware of you of radiation levels dropping, and how does that affect the health of the wildlife, do you think?

SMITH: Well, we've also looked at mammals in the exclusion zone. So the exclusion zone, it's about 4,000 square kilometers of land, and roughly half of it is in Ukraine and half of it is in Belarus to the north of Ukraine. And we worked with our Belarusian colleagues who studied their sector of the zone, so their half of the exclusion zone, and we found in a paper that we did last year the mammal communities are doing very well. The Belarusians have used helicopters to survey the zone for wild boar - I think you call them hogs in the United States - roe deer and elk. And what they found was an increase in population from about one to two years after the accident, up to 10 years after the accident.

CURWOOD: It seems to me that the wildlife is doing OK. How safe would it be for people to move back there?

SMITH: Most levels of radiation, even if they're very high at Cherynobyl at the moment, it's quite a small risk, but it's a risk that often humans don't choose to take. The exclusion zone is only habited because we consider the risk of say, one in a 1,000, risk of cancer in human life is not a risk that it's fair for a person to have. So that's why the exclusion zone’s uninhabitated. But, for a mammal population, so a population of wolves or a wild boar, this relatively small risk doesn't affect the population, although on rare occasions it might affect an individual. 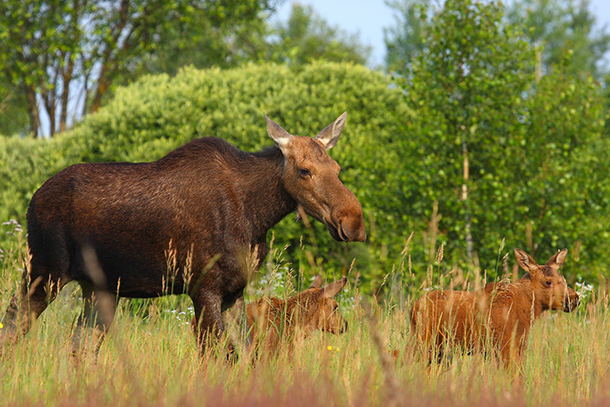 A family of moose who have made the Exclusion Zone their home (Photo: By Tatyana Deryabina)

CURWOOD: I have to ask you, when you go there, what do you wear in terms of dosimeters? Something on your body to tell you how much radiation you got?

SMITH: Yeah we always wear a dosimeter, usually we go for about two weeks, and we go to various spots, we're not in the hotspots all the time. And I get a dose of about 0.1 or 0.2 milisieverts, and that probably doesn't mean much to most people...

CURWOOD: It doesn't. Tell me, what does it mean?

SMITH: So, in the UK, we get about 2.7 milisieverts every year from natural radiation and from X-ray diagnostics, so it's about 20 times lower than I'm getting in the UK. So the radiation doses now in the exclusion zone, there are some real hotspots to be very careful of, but they are quite small and most of the zone you can go on a two-week visit and you don't get too big a radiation dose.

CURWOOD: So, of course, you don't research on humans directly. Your perspective on the effects of human health from this accident?

SMITH: People are always understandably interested in what the human consequences have been, but statistically, it's going to be very difficult to see that because we can't distinguish between a cancer that's come from radiation and a cancer that's come from other causes. So unfortunately, in developed countries about a quarter and a third of people die from cancer. It's very difficult to see this small increase of risk of cancer from Chernobyl amongst the "natural" cancers, if you like. So, I think statistically we'll probably never know how many people have died from Chernobyl, but the estimates have been in the, say, 8,000 people.

CURWOOD: Now, there was quite a flap about the question of thyroid cancer, of course, which is something that affects young people as well. So, that type of cancer, to what extent do you see that among animals?

SMITH: I don't think that there have been any studies of that. I don't think anyone has really looked at that. It's clear as you say, in a big increase in thyroid cancer in Belarus since the accident, so there have been several thousand cases since the accident and that was primarily due to the fact that the Soviet Union then didn't take enough precautionary measures to stop people eating contaminated milk, contaminated produce, after the accident. Fortunately, thyroid cancer’s one of the more treatable cancers, but it is still a serious disease.

CURWOOD: Now, I know this isn't your particular area of expertise, but there appear to be different suggestions as to the area's future. Some are suggesting to use it to store high level waste or others say, “hey, it should just continue as a nature reserve.” Where does the debate stand from your understanding? 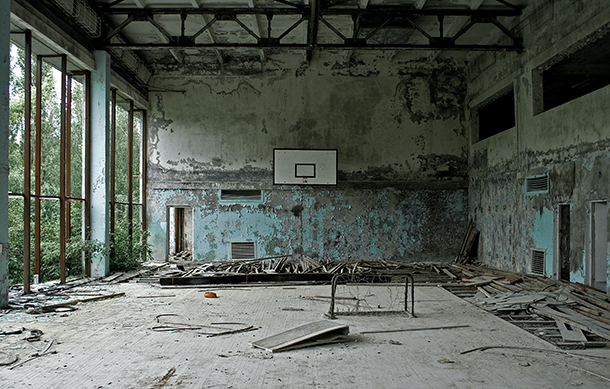 A public gymnasium that was abandoned after the nuclear disaster (Photo: Phillippe Simpson, Flickr CC BY-NC 2.0)

SMITH: I think we're getting conflicting views from various people in Ukraine on this. A few weeks ago the Ukrainian government declared the zone as a nature reserve which it kind of has been because the animals of been protected by the fact that there aren't people there, but also there's discussion about using it as a waste storage site. I'm not a geologist so I can't comment on the geological suitability of the site, but from a human perspective it makes a lot of sense to me because people quite understandably don't like waste, nuclear waste sites, next to their houses. As it is, I don't think people will go and live there again. People understandably don't particularly want too many people, so I think the exclusion zone will remain pretty much as it is, as a kind of strange wildlife reserve.

CURWOOD: As far as you've seen, it seems that nature's pretty resilient. How fair is that observation?

SMITH: I think that's true, I mean you could say that radiation is perhaps not bad as we think. I've been studying radiation for 25 years and thinking and talking to people about it, and thinking about how we perceive it and it's something that we are naturally frightened of quite understandably because we tend to associate it with the horrible nuclear bombs in Hiroshima and Nagasaki, very awful events like Chernobyl and the Fukushima accident. We can't see it, we can't smell it, it kind of has all the elements of things that make us afraid, and I think perhaps we're more afraid than we should be. Yes, it's dangerous, but it’s perhaps not as dangerous as we think it is.

CURWOOD: Jim Smith is a professor of Environmental Science at Portsmouth University in the UK. Thanks so much, Jim, for taking the time.

U.N. Document on the Human Consequences of Chernobyl