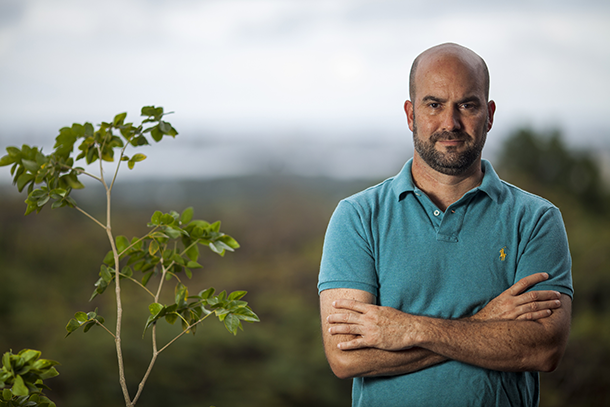 Goldman Prize winner Luis Jorge Rivera Herrera grew up surfing on a wild stretch of coast called the Northeast Ecological Corridor. Years later when he learned of plans to built two massive resorts in the area, known for biodiversity and an important nesting site for endangeredleatherback turtles, he rallied opposition to the project. Host Steve Curwood talks with Luis Jorge about his fight to protect the biodiversity of Puerto Rico.

CURWOOD: Of course Puerto Rico is part of the US, but it’s not a state, and this year the Goldman winner for the island territories is Luis Jorge Rivera Herrera, an environmental scientist from Puerto Rico. He won for his work protecting a strip of undeveloped coast in the area of Luquillo beach called the Northeast Ecological Corridor. The hotspot of biodiversity is home to more than 50 at risk species and in the late 90s developers proposed building two giant resorts with room for thousands of tourists. But Luis Jorge and others rallied public opposition to the development in order to protect the region's natural resources and the incredible ecology found in the corridor. Welcome to Living on Earth.

CURWOOD: Tell me a bit about this land that you've worked so hard to protect. What is the northeast ecological corridor? 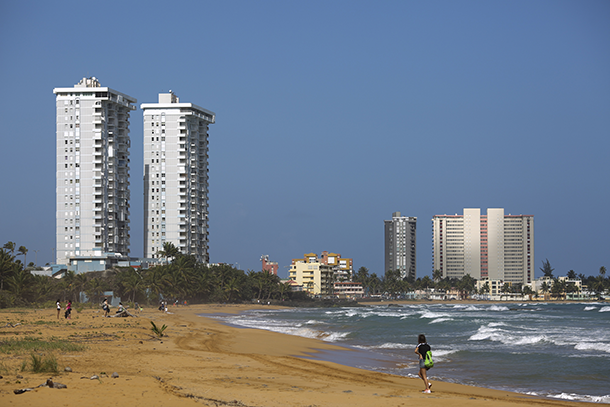 RIVERA HERRERA: This is a piece of land that extends approximately a thousand acres in the northeastern region of Puerto Rico, specifically in the vicinities of Luquillo and Fajardo. The corridor is possibly best known as one of the best nesting sites for the endangered Leatherback sea turtles in any area within the US jurisdiction. However, the corridor is also important due to all of the habitats that it harbors, for example, there are coral communities, sea grass beds, mangrove forest and even bloodwood swamps which is a type of wetland that is almost endangered in Puerto Rico. Also what makes the corridor really important is its relation with the El Yunque rain forest which is also managed by the US Forest Service because within a very limited space that runs approximately 30 miles inland you can find all six life zone that are in Puerto Rico. Meaning, for example, in the corridor you can find coastal dry forest and at the other end, you can find a tropical mountainous rainforest. And just to put that characteristic into perspective, if you want to see six life zones, let's say here in the US mainland, you will have to travel hundreds if not thousands of miles and on that corner of the island by just traveling 30 miles you can see all that biodiversity.

CURWOOD: You talked about the Leatherback turtles, Luquillo, of course, is famous for its beach, and Fajardo is a popular jumping off places for the offshore islands and the beaches. But the Leatherback turtles are bothered if there are lights on the shore that confuse them in nesting. How were you able to deal with the pressure of development in this area? 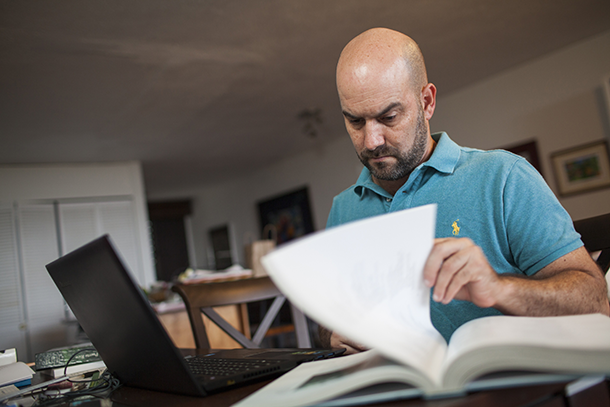 Rivera Herrera first heard about the planned mega-resorts through an ad in a newspaper (Photo: Goldman Environmental Prize)

RIVERA HERRERA: Well, initially, we were trying to bring up to the public's attention, the value of the corridor, and some people sympathized about the need to protect such an extraordinary natural area. But also we had to confront people and make them aware about the impact that the resorts that were being proposed on the corridor would have had on their daily livelihoods. Some of the projects were asking the government to exempt them from providing public access to the beach there in Luquillo and Fajardo and as islanders, we feel a really big connection with our coastal resources. So that didn't sit too well with too many people. The other big impact that the resorts would have had was on the public water supply because especially during the early 2000s, many communities were bad or deficient on the public water supply, so you can imagine what would have happened if over 4,000 hotel and villas would have been built on that same area where many communities were lacking water.

CURWOOD: How much support was there from the people of Puerto Rico to protect this territory? 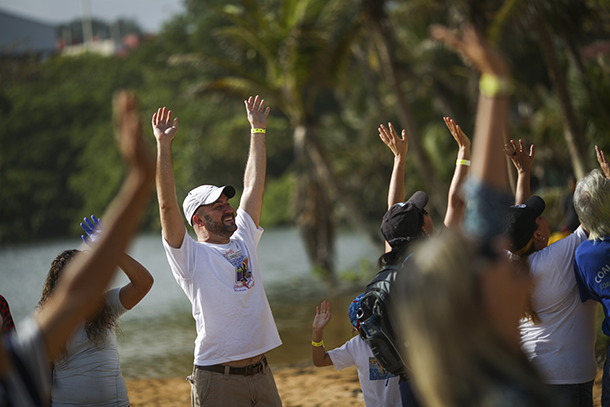 RIVERA HERRERA: Well, that really was what made the difference. At the beginning of our campaign, we were trying to convince the government that building those two resorts was a bad idea, but that didn't work out. Then, we went into courts, and that also helped us gain momentum and especially time in order to promote more citizen participation and attention to the protection of the corridor. One, specific activity that probably was a game-changer was the celebration of a festival that we have been conducting or running for the past 11 years, it's called the Festival el Tingular, or the Leatherback Festival. It revolves around the Leatherback. It is a way to introduce people to the value of the corridor also through cultural activities and music. So, possibly, if there are citizens or people that are not that involved or interested in the protection of natural resources, we can grab their attention through that cultural activity, and they finally become engaged in protecting the area.

CURWOOD: So, how are things now? These resorts weren't built, and the entire corridor along with the turtles that like to come ashore are doing much better? 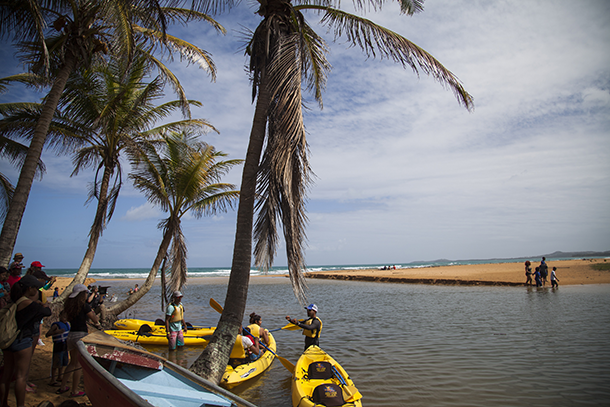 Rivera Herrera wants to see low-impact ecotourism in the corridor so that people can benefit economically while maintaining a healthy ecosystem (Photo: Goldman Environmental Prize)

RIVERA HERRERA: Yeah, definitely. After many years of a struggle, finally in April 2013, the corridor was finally designated by law as a nature reserve. Nevertheless there is a lot of work that still needs to be done. Today, there's still about 30 percent of the lands within the corridor that are still privately owned. So we are also trying to support the government looking into possible sources of financing in order that the government can complete the acquisition of those private lands, so the Puerto Rico Department of Natural and Environmental Resources can manage the whole area comprehensively. We are also working with the local government municipalities in order to develop a participatory or citizen planning process that will also integrate the surrounding communities and downtown Luquillo into whatever economic opportunities could arise as part of ecotourism and tourism activities taking place in the corridor.

CURWOOD: What would you say to other people who are wrestling with the question of balancing development because many people have low incomes in Puerto Rico and protecting the environment? 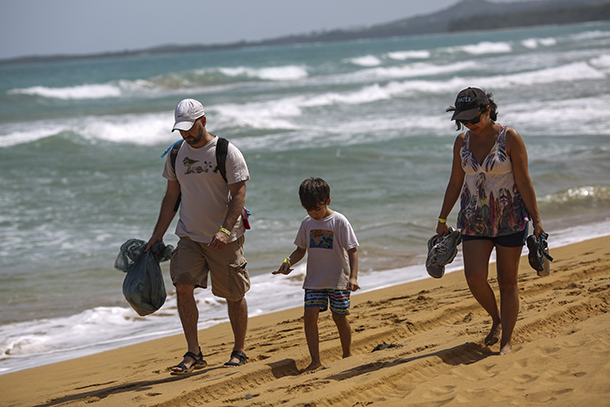 Rivera Herrera hopes his son will be able to surf the waves of the Northeast Ecological Corridor like he did growing up (Photo: Goldman Environmental Prize)

RIVERA HERRERA: Well, first of all, we need to acknowledge that for any kind of development to take place, we need to protect and conserve our natural resources and that doesn't mean that we cannot use them, it's just use them wisely. For example, right now, the island is submerged in a very difficult economic and fiscal situation. There's even a bill that has been filed in the US House of Representatives that will allow this oversight board to repeal any environmental law or regulation in the island in order to supposedly allow and fast track any projects that they deem are important to promote economic development. But if we don't protect our natural resources, for example, we could end up lacking water or having water that has been polluted, and I believe that is something that people from Flint, Michigan, or here in California can relate deeply because if you don't have enough water resources and in good quality you cannot basically develop any kind of activity. So, we need to acknowledge that for development to take place, we need to use our natural resources wisely.

CURWOOD: Luis Jorge Rivera Herrera is an environmental scientist in Puerto Rico and winner of this year's Goldman Prize. Thank you so much.

RIVERA HERRERA: Thank you for your interest and your time.


Read more about Luis Jorge’s work on the Goldman website

Read more about the corridor