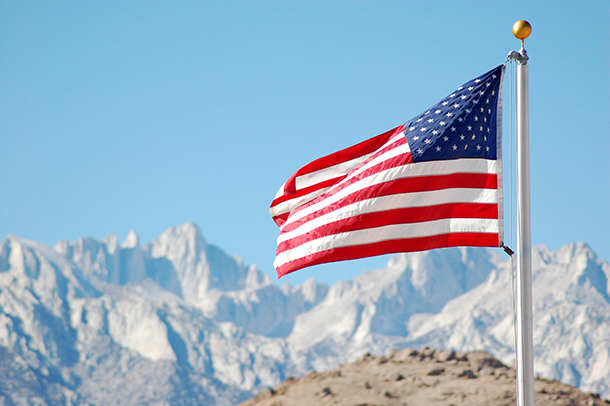 Wolsko presented the “binding” group in his study with a message linking patriotism with protecting the environment, alongside an image of a flag waving in front of a distant mountain peak. (Photo: Matt Artz, Flickr CC BY-NC-ND 2.0)

In the US political conservatives often express less concern about environmental issues than liberals. But eco-psychologist Christopher Wolsko of Oregon State University tells host Steve Curwood this is due in part to the liberal framing of issues. His studies indicate reframing environmental topics in ways that reflect conservative values such as respect for authority and patriotism can better engage conservatives.

Professor Wolsko calls himself an eco-psychologist and has been studying how liberal and conservative value systems affect environmental politics, especially regarding climate change. He says his research shows the present framing of environmental issues with largely liberal values tends to exclude conservatives who might otherwise embrace them. Chris Wolsko joins us now; welcome to Living on Earth.

WOLSKO: Thanks for having me.

CURWOOD: So tell me, why did you want to look at how reframing climate change to better reflect conservative values, conservative parlance, might have an effect on how they respond to that and other environmental issues?

WOLSKO: In one sense it was really just a basic exploration of persuasion and message framing processes in social psychological experimentation. In another sense it is an example, arena, of what I would consider to be the absurd or overly extrematized, political polarization that we see across a number of social environmental issues. Environmental issues just happen to be of concern to me, and what we see generally in terms of the political polarization on environmental issues, I’m sure many people are aware of, is just a strong, strong correlation between identifying as liberal and saying you practice a variety of conservation behaviors, and indicating that you believe in climate change and are concerned about it, and identifying as conservative and kind of doing the opposite. 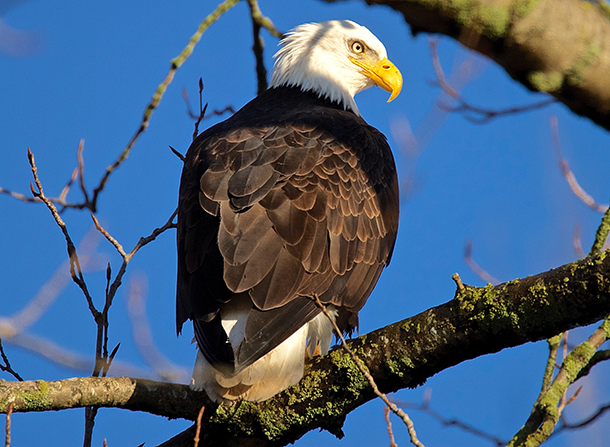 Wolsko also used an image of a bald eagle in his study, as the national bird symbolizes patriotism for many Americans. (Photo: Jerry McFarland, Flickr CC BY-NC 2.0)

CURWOOD: As I understand it, you’re really looking at moral framings of these issues.

WOLSKO: That’s right. So in research and actual practice of persuasion out there in the world, people frame things in all sorts of different ways. Commonly we see things like fear appeals, both in an environmental messaging, as well as in public health messaging, as well as in getting people to buy a certain kind of beer for fear they’ll be rejected if they don’t, so that’s a common...There’s a whole range of appeals...and we were looking at moral framing because there was some new content analyses of media reports that really tended to reflect the fact that contemporary discourse on environmental issues tends to be discussed in liberal moral values rather than those that tend to appeal to conservatives to a greater extent.

CURWOOD: OK, so what are the liberal moral values?

WOLSKO: Liberal moral values tend to focus on fairness and justice concerns, and concerns about whether individuals are being harmed or cared for. As a package they’re referred to in the context of moral foundations theory as “individualizing” moral concerns, so protecting the rights and integrity of individual lives. 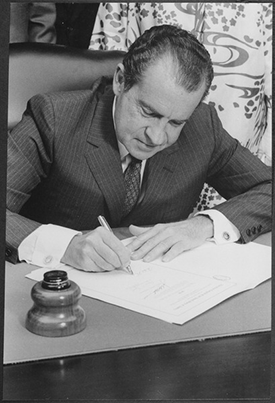 WOLSKO: Conservatives tend to be concerned with those values as well but also perhaps more strongly emphasize what moral foundations theorists have called “binding” moral values, so these are the ties that bind, that draws into important social groups and what-not, so things like in-group loyalty, respect for authority, and concerns about the purity and sanctity of human endeavors, so thing like resisting overly hedonic behaviors in a way that would kind of throw the group out of balance if everyone was kind of seeking their own personal desires.

CURWOOD: You know, over the past 40 plus years since that first Earth Day, the environmental issues have been cast by the media and certain advocacy organizations. How much do you think their approach to this issue has led to this polarization we see, that using values that don’t resonate with conservatives?

WOLSKO: I think it has a lot to do with it. You know, conservative media sources are just as responsible in their own way by derogating liberal framing, you know, vice versa. So both the angles are happening. In this particular case, environmentalism has been largely championed as this politically liberal cause and because liberals tend to value these moral frames of fairness, justice, harm, and care, a lot of the discourse around environmentalism has focused on these values to the exclusion of conservative values. So I think that’s a great error and my hypothesis is that conservatives are not inherently anti-environmental so much as they are chronically rejecting the liberal tone of the prevailing environmental discourse around these issues.

CURWOOD: As part of a social psychology experiment on the framing of climate change, Professor Wolsko recruited 185 people across the political spectrum. Then he randomly assigned them to one of three groups, and presented each of the groups with value-oriented environmental messages.

One group saw calls to action that emphasized liberal values like fairness and justice, and who might be harmed. He termed that group “individualizing”. The second group saw messages that highlighted loyalty, respect for authority, and pride in the United States, and he called them the “binding” group.
The final control group just received a brief generic call to address environmental issues. Again, Professor Wolsko.

Greater awareness of the ways that climate change and other environmental issues are framed is key to a bipartisan conversation on these issues, Wolsko says. (Photo: Bo Insogna, Flickr CC BY-NC-ND 2.0)

WOLSKO: Essentially what we found in the control and in the individualizing condition was the typical political polarization that we see on public opinion polls and what not.

CURWOOD: So what’s that?

WOLSKO: In relationship to climate change – and I had a multi-dimensional measure of climate change. So in relationship to that measure, conservatives tended to report being less concerned about the effects of climate change, tended to believe that it was happening less, tended to believe that it was more caused by natural cycles rather than human-caused, and liberals were just the opposite, so that typical political polarization, quite strong correlations between political identity which was measured before the manipulations and these measures of climate change. We also asked about conservation behaviors, how likely are you to engage in a variety of different behaviors like recycling, like composting, using green products such as compact fluorescent lightbulbs, things of that nature. We also asked in a more recent study about connectedness to nature which is not typical conservation behavior at all. It’s just more of an experiential sense that one has a positive relationship with the natural environment, and also in that case, in both control and in individualizing conditions, we saw a polarity such that conservatives said they were less connected to nature and less likely to engage in these conservation behaviors than did liberals.

CURWOOD: So how did people respond to the other way you framed things?

CURWOOD: Chris, if the phone were to ring after the interview and an environmental organization or advocates called you up and said, “Please, help us reframe what we’re talking about for conservatives, particularly around climate change,” what advice would you give them?

WOLSKO: Well, on one hand, a big part of the problem why we see such divisive political polarization around a number of other social issues, as well as these environmental issues, is because we chronically segment the market share that we’re interested in targeting and tell those people what we think they want to hear from who we think they want to hear it from. The problem with that long term is that it creates this, you know, separate reality. It’s very manipulative. It’s very much for the short-term gain of someone agreeing with your position and/or donating to your cause. I think what we need actually is a more inclusive dialog that includes this whole range of moral values in any appeal, so that we can simultaneously, first of all, be aware of this range of moral values, affirm our own ones that are particularly important to us, and tolerate and respect those that are important to others. So in some current research that I have under review, I’ve actually attempted to come up with this sort of frame that both affirms liberal and conservative moral values, but does so in an inclusive sort of way, and I’m seeing similar if not better responses. 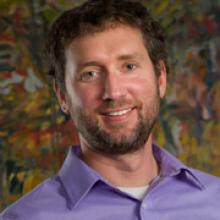 CURWOOD: So tell me, how do you frame this in a way that’s inclusive for both liberals and conservatives?

WOLSKO: Well my first effort in this regard has been to explicitly tell the target audience that liberal values have traditionally dominated the discussion of environmental issues and that conservative values are actually uniquely situated to address environmental issues as well. I use a slogan called “Conservative Values, Conserving the Environment,” and I go through and list the number of conservative values that previous research might suggest would be appealing in this regard and have people read through them and have both liberal and conservative audiences look through and choose ones that they feel might unite all people across the political spectrum on environmental issues and, interestingly, the one that comes up is personal responsibility. That’s a big one. So take personal responsibility for yourself, for your family, for the land that you call home, and this seems to be an overlapping value that both liberals and conservatives can agree upon as really important for promoting pro-environmental causes.

CURWOOD: And what are some of the other mutually acceptable values?

WOLSKO: A couple of the other values championed both by liberals and conservatives included making your own decisions on local land and water issues in the best interests of families rather than leaving it to bureaucrats, respecting your elders and teaching your children good values about taking care of the environment, and also working hard and playing hard in the great outdoors. So part of the purposes of this new research was to come up with this inclusive set of values, as well as to just model a persuasive message that doesn’t try to manipulate but tries to encourage this discourse around finding solutions that appeal to both liberals and conservatives, even though they might not be identical.

CURWOOD: Christopher Wolsko teaches eco-psychology at Oregon State University in Bend Oregon. Thank you so much!

WOLSKO: Thanks for having me.


Read the paper: “Red, white, and blue enough to be green: Effects of moral framing on climate change attitudes and conservation behaviors”