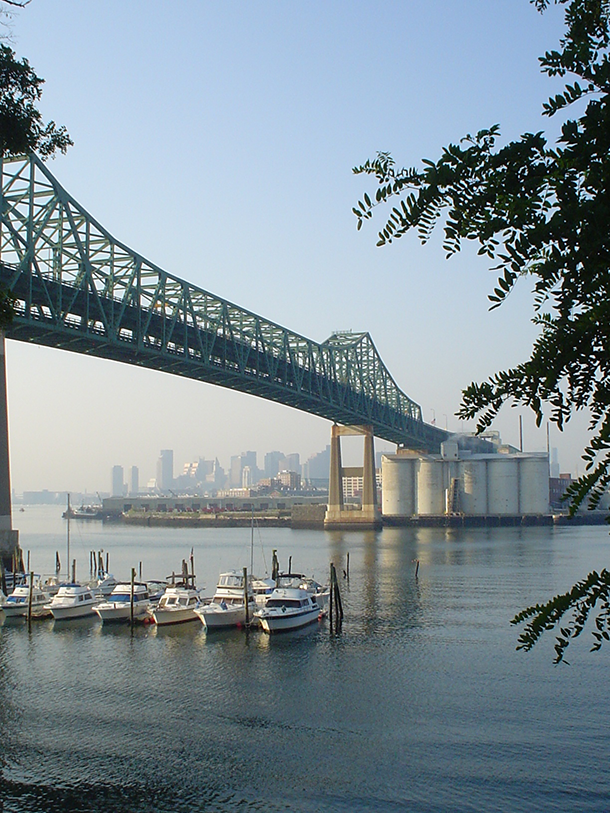 As investigations into ExxonMobil’s public versus private communication about climate change continue, the Conservation Law Foundation (CLF) is pursuing another legal avenue to hold ExxonMobil accountable. CLF President Brad Campbell tells host Steve Curwood his organization has taken steps to sue the company for polluting the Mystic River at Everett, Massachusetts and for failing to prepare its Everett storage facility for rising sea levels and other climate impacts.

CURWOOD: The Mystic River that empties into Boston Harbor is a polluted nightmare, that rarely earns more than a D on the federal government’s annual water quality report card. And now a regional advocacy group, the Conservation Law Foundation, is going after one of the wealthiest alleged polluters of the Mystic River, the ExxonMobil Corporation. In addition to claiming Exxon leaks toxic chemicals from a storage facility in Everett along the Mystic, CLF says the oil giant has failed to prepare for sea level rise and storm surges related to climate change. Bradley Campbell is President of the Conservation Law Foundation and I visited him in his downtown Boston office. Welcome to Living on Earth, Brad.

CURWOOD: Now, you filed a notice of intent. Take me to law school here. Why don’t you just sue Exxon?

CAMPBELL: The federal environmental laws provide for citizens suits, for citizens to enforce the law, but they also insist that we provide advance notice to the companies before we sue them and also to the Justice Department and the EPA and sometimes the federal agencies use that notice to come in and take over the case, often to protect the companies from aggressive enforcement. We don't think that'll happen in this case. We think the Obama administration will not essentially want to protect Exxon Mobil, but we still have to go through the process of providing notice of the suit, but we will promptly file at the end of the 60 day Clean Water Act notice period.

CURWOOD: A number of states attorneys general are investigating Exxon Mobil for its alleged role in sowing climate denial and allegedly misleading investors and the public about the risks of climate change. Why is the failure to prepare for climate change at this site, that you're accusing Exxon of, different? 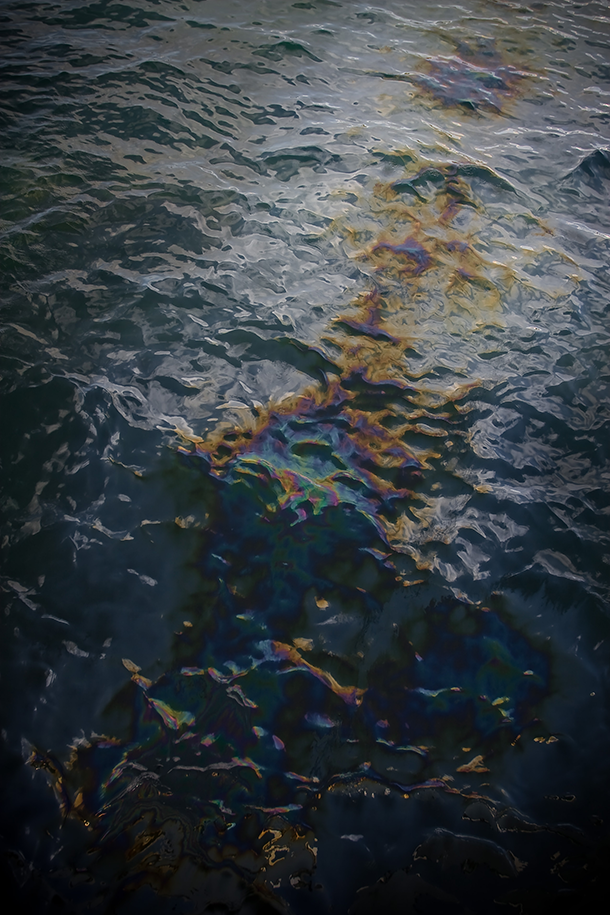 CAMPBELL: Well, the attorneys general are looking really at the tools that prosecutors have in terms of the securities laws, in terms of the racketeering laws. We're looking more narrowly at the requirements of environmental laws, particularly the Clean Water Act. In essence facilities like this have to certify to the EPA on a regular basis, in sworn statements, that they've done everything they can in their professional engineering judgment to avoid an unintended release of oil or hazardous substances. This facility is in constant violation of its permits, so obviously they're not meeting the test even in day-to-day conditions, and we're not talking about trivial violations. We're talking about significant, tenfold exceedances of their permit, in many cases of very potent carcinogens, right in the heart of densely populated communities. In the case of a category one storm it would essentially be inundated, tanks would likely collapse, and there would be oil and hazardous-waste not just throughout these communities, but also throughout the Boston Harbor complex, and so we see this as a bread-and-butter case under the Clean Water Act where they're saying, “This facility’s ready for the impacts, we know are ahead,” when in fact it isn't.

CURWOOD: Talk to me about some of toxins that are coming out of this facility.

CAMPBELL: Obviously, you'll have many different forms of petrochemicals, oil gasoline and the like. It's a toxic soup of various carcinogens like benzene and others that have obviously significant human health impacts, but also need to be controlled. And what we learned in our investigation is that Exxon Mobil, this facility, has a treatment system that is overwhelmed whenever you have a significant rainfall. So we have videotape of their discharge point with oily sheen coming out of it on a regular basis.

CURWOOD: So to what extent does your lawsuit hinge on the finding the Exxon knew about the risks of climate change and therefore there will be rising season seas that can affect these tanks.

CAMPBELL: Well, thanks to a number of investigations, we know that Exxon has known, and its scientists confirmed as early as the Nixon administration that climate impacts were real, that they were potentially catastrophic, and that they were linked to carbon dioxide and other greenhouse gas emissions. But even as Exxon Mobil designed their market strategy, designed their high-end infrastructure, like oil platforms, to withstand climate change impacts like rising seas, more intense storm events, they left facilities that were in the heart of communities very vulnerable. 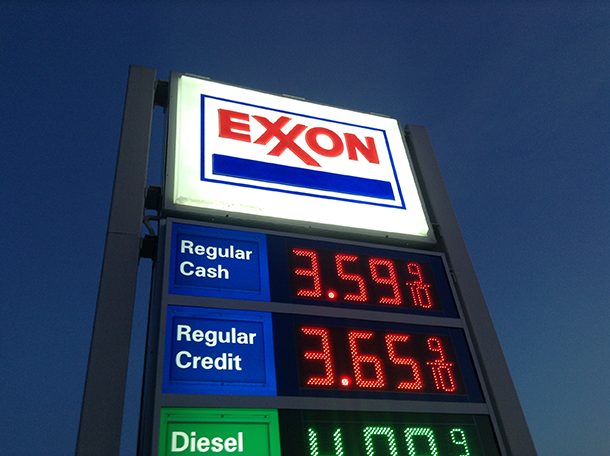 CURWOOD: Brad, you're saying that Exxon hasn't adequately prepared for the effects of climate disruption of this particular site. To what extent might there be many other industrial facilities that are similarly ill-prepared, and which of those operators by the way knew about climate change way back when?

CAMPBELL: There are a number of facilities that we're investigating in this region and beyond that present the same threat to communities. They’re low lying, they’re on the coast, and they're vulnerable, and in many cases there’re densely populated communities surrounding them and as you might expect those communities tend to be lower income communities and committees of color that have always gotten short shrift from the regulators and enforcers. We think that there are many other companies that are situated similarly to Exxon, but Exxon's climate deceit has been the most egregious. They are not just deceiving the public in terms of political debate to avoid regulation. They're also deceiving both the public and the regulators, to whom they're regularly submitting false statements, about the risks that are immediate to families and businesses that have hosted these facilities for generations.

CURWOOD: Why in your view have the regulatory agencies not called Exxon to account if, in fact, as you are saying, right now they’re violating the Clean Water Act? 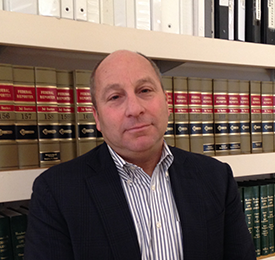 Bradley Campbell is the President of the Conservation Law Foundation, based in Boston. (Photo: Jenni Doering)

CAMPBELL: There are a couple of factors I think in play. One is that, as compared to water bodies that are in more affluent communities, like the Charles River, the Mystic River has been underserved by the regulators and enforcers. The second factor that I think is important for this case is that EPA really has not itself caught up with the implications of climate change, in terms of how it administers the Clean Water Act, and so when they look at a certification as to whether a facility is ready, they like many in the regulating community still look back to, “Well, what were the historic conditions that this facility has to be ready for?” And our view, as both the law and common sense dictate, that a facility should be ready for the conditions that lie ahead and not just the conditions that lay behind us because we know from climate science that the conditions ahead are going to be very different, and they're going to be much harsher.

CURWOOD: Brad Campbell is President of the Conservation Law Foundation. Thanks so much for taking the time today.

CAMPBELL: Thank you for your interest in this issue.

CURWOOD: We contacted Exxon-Mobil for comment. Its statement is posted in full on our website LOE.org. And it reads, in part, “Operations at the Everett terminal comply with federal and state government environmental standards, including monitoring and treatment of ground water.”

"The Conservation Law Foundation’s lawsuit is part of a well-publicized coordinated assault on ExxonMobil’s reputation that is underpinned by deliberately inaccurate reporting on our nearly 40 years of publicly conducted climate research. The organization is funded by extreme anti-oil and gas activists, including the Rockefeller Brothers Fund.
To suggest that we had reached definitive conclusions, decades before the world’s experts and while climate science was in an early stage of development, is not credible.
ExxonMobil believes the risk of climate change is clear and warrants action. We are taking action by reducing greenhouse gas emissions in our operations, helping consumers reduce their emissions, supporting research and participating in constructive dialogue on policy options.
Operations at the Everett terminal comply with federal and state government environmental standards, including monitoring and treatment of ground water. The U.S. Environmental Protection Agency and Massachusetts Dept. of Environmental Protection recently inspected the Everett terminal as part of a Storm Water Pollution Prevention Plan review and found no issues with compliance or cause for concern. ExxonMobil takes its environmental responsibilities seriously and continues to perform work at our facility to minimize environmental impacts.
Our facilities are designed, constructed and operated to withstand a variety of extreme climactic and other conditions, with safety factors being built in to cover a number of engineering uncertainties, which cover those associated with potential climate change impacts. We continue to engage with major engineering societies, international organizations and industry groups to develop sound engineering perspectives on managing the risks of extreme weather."

Read the Notice of Violations and Intent to File Suit

Listen to an earlier Living on Earth interview, “Exxon Denied its Own Climate Research”