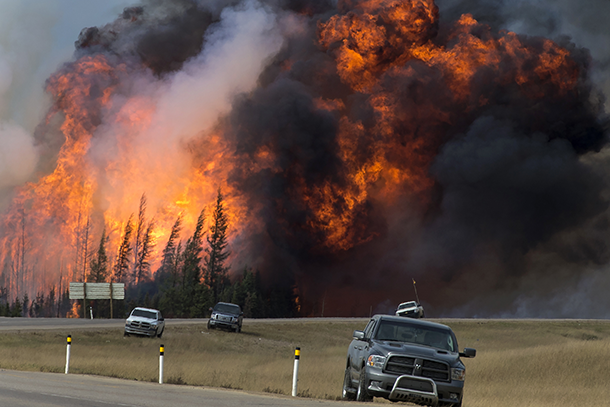 The raging wildfire that a fire chief nicknamed the “Beast” near Fort McMurray May 7, 2016. (Photo: Chris Schwarz/Government of Alberta, Flickr CC BY-ND 2.0)

Fire is natural in the northern boreal forests, but Canadian wildfire expert Mike Flannigan says it has become more prevalent with global warming and puts more communities at risk of massive blazes, like the one that ravaged Fort McMurray in Alberta recently. Flannigan tells host Steve Curwood what communities and homeowners in the midst of fire-prone forests need to do to minimize their risk.

CURWOOD: From the Jennifer and Ted Stanley studios at the University of Massachusetts Boston and PRI, this is Living on Earth. I’m Steve Curwood. In terms of dollars, it’s the biggest natural disaster to ever hit Canada. Some $6 billion worth of property went up in smoke as wildfires swept through the City of Fort McMurray in Alberta earlier this year, leaving many homeless. As the immediate threat of the wildfires recedes, those residents lucky enough to still have a home are slowly returning. In this era of global climate change the far north is the fastest warming part, with fires doubling in size over the past fifty years in this region of vast and carbon-rich boreal forests that naturally burn from time to time, and people are rethinking how to protect forest communities like Fort McMurray. For insight we turn now to Mike Flannigan, the Director of the Western Partnership for Wildland Fire Science at the University of Alberta. He joins us from Edmonton. Welcome to Living on Earth.

FLANNIGAN: Oh, glad to join you.

CURWOOD: Now the wildfires that overtook Fort McMurray in early May were particularly devastating. Why?

FLANNIGAN: Well, there are three ingredients for a forest fire to occur. You need fuel, the stuff that burns, the dead organic tree on the forest floor - needles, leaves, the shrubs, the trees. How much fuel you have, how dried it is really important. The second ingredient is ignition and people and lightning are the two common ignition agents. The third reason is the weather—hot, dry, windy, we call it. So you need all three to come together and that's exactly what happened this spring at Fort McMurray. We have lots of fuel in the boreal forest. We had an ignition that's still under investigation. I'm 99 percent sure it's human-caused because of the time or year and the location, the proximity. And we had hot dry windy weather. 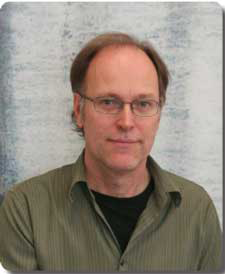 FLANNIGAN: Well, in Canada our average annual area burned used to be one million hectares per year in the early ’70s. It is now two million hectares per year and we believe this is due to human-caused climate change, and in particular the temperature. I get asked all time, why temperature? Well, three reasons: first the fire season is longer, the warmer we get. In Alberta, our fire season officially started this year on March 1, it used to be April 1. Second, the warmer it is, the more lightning you get. The more lightning you get, the more fires you get. Third, probably the most important: as we warm the atmosphere's ability to hold moisture increases almost exponentially. What this means is the atmosphere is more effective at sucking the moisture out of the fuel, and projections of the future say we're going to warm but we’re not going to get that much more precipitation. Bottom-line, dry air, fuels, easier for fires to start to spread.

CURWOOD: So what could communities like Fort McMurray that are surrounded by forests do differently to prepare for large wildfires if these are to be coming again and again and again? What's to be done?

FLANNIGAN: Well, we go back to the three ingredients. We cannot do anything about the weather, we cannot do it about lightning. We can do things about human-caused fires and fire management agencies do a recently good job - prevention, education, firebands, fire restrictions - but I think the biggest gains can be made by managing fuels around communities, reducing the amount of fuel, the type of fuel. Conifers are very flammable, so you want to remove conifers around communities. If you have trees, have deciduous trees or have grass, you can have sprinklers. Don't have things like wood shingles on your roof, pine needles in the eave troughs, wood decking, shrubs beside your house, firewood stacked by your house. I was on the Slave Lake fire shortly after the fire and fire is opportunistic. It likes to find a pathway. It's looking for a wick. And there was one house that unfortunately burned down, and it had mulch along the sides of the driveway. The fire burned the mulch right up to the house and then burned the house, so you got to think how can the fire find its way to my house and how can I stop this. There's programs in Canada, and in the United States. The United States is called Fire Wise. Canada it’s called Fire Smart. There's guidelines and suggestions for homeowners and for communities to reduce the risk of fire. 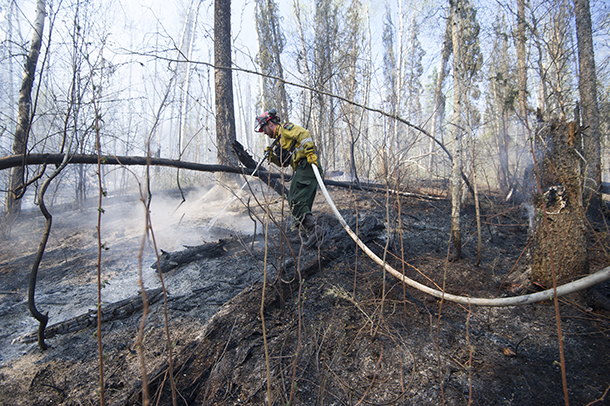 CURWOOD: So, essentially we are talking about fire breaks, fire lines. What would've protected Fort McMurray? How far back would you have to cut the forest in order to have avoided disaster in Fort McMurray?

FLANNIGAN: Well, let's put it in context. Fort McMurray I would classify as medium risk. There are communities across boreal forest that are much higher risk because they have more conifers around them. There's a lot of deciduous trees around Fort McMurray, but to answer your question, I mean you want to fireguard at least 50 yards, and what that does is it allows fire management crews to put the fire out because if you remove the fuels it will be lower intensity and they can deal with the fire. High intensity, you can't use firefighters on the ground because it's not safe and an aerial attack becomes ineffective. In an ideal world, you'd like two kilometers. You say why two kilometers? It's because, and maybe some of your listeners seeing some of the video from Fort McMurray saw this rain of burning embers, those burning embers can be carried up to two kilometers by the wind and start a new fire in advance of the head of the wildfire.

CURWOOD: In other words if you want your town to be completely safe in the boreal forest, you need to be little more than a mile away from big forest.

FLANNIGAN: Yeah and even then I would say it greatly reduces the risk but it would still not eliminate the risk unless you've had cement or pavement or bare ground or something because even if you had grass and sprinklers, grass does burn under the right conditions. Fuel is fuel is fuel, we say when the weather is severe and one of the characteristics about fire is that in western United States, one percent of fires are responsible for 99 percent of area burned. In Canada, 3 percent of of the fires are responsible for 97 percent of the area burned. So, what happens is most of the fires, the big fires, occur on a few critical days of hot, dry, windy weather. Fire management agencies are very effective at putting out fires under most conditions except under the extreme conditions, but those are the times when we have the largest impact and the biggest area burns. 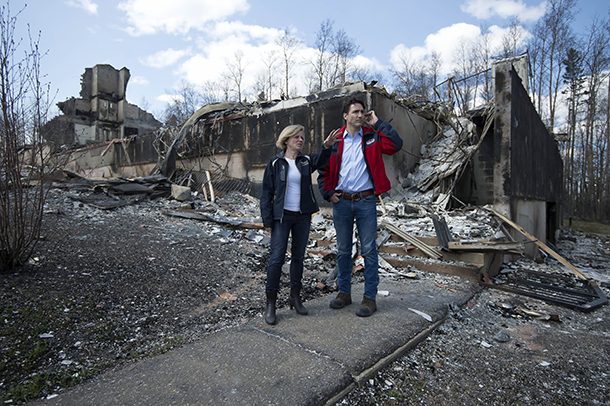 Premier of Alberta Rachel Notley and Prime Minister Justin Trudeau visited Fort McMurray on May 13th, 2016 in the wake of the wildfire that ravaged the city. (Photo: Chris Schwarz/Government of Alberta, Flickr CC BY-ND 2.0)

CURWOOD: So in other words, the fire army can handle most assailants, but when Godzilla comes, it is a problem.

FLANNIGAN: And it's a big problem, yes. It's a monster. Now, a curious thing about this particular fire is that it developed a pryocumulonimbus, pyro CBs we call them. It developed its own thunderstorm, and this thunderstorm actually generated lightning which we've seen before, but these lightning strikes from this particular pryocumulonimbus started new forest fires because the forest fuels were so dry and that's the first time I’ve seen the lightning from a fire thunderstorm start new fires.

CURWOOD: So we're talking about a new meaning to firestorm.

CURWOOD: Hey, what's the difference in terms of forest management policies between the US and Canada?

FLANNIGAN: Well, both countries have modern fire management agencies. They're very effective at what they do, but both countries have changed their thinking recently and a catalyst for change in the United States was probably the Yellowstone fires. When they happened in 1988, at the time many people considered it a disaster, that a huge chunk of Yellowstone National Park burned down, and the reality is, it's part of ecology of the forest. Trees in the boreal western United States, they're used to regular stand-replacing, stand-renewing fires. Fire management in the United States and Canada has moved away from the full suppression model. It used to be, you put out all the fires, all the time. Now we have something called appropriate response, and when a fire starts they determine if it's an unwanted or dangerous fire, and if so, they hit hard, they hit fast. However, if a fire occurs in the wilderness, we run fire growth models for the next week or two, and say, “where will that fire spread?” If it's not spreading towards communities then we say, “we'll monitor this fire and let Mother Nature do her job.” So this is the new reality we have to live with fire, coexist with fire because we cannot completely eliminate it. We've tried to eliminate fire and it doesn't work. 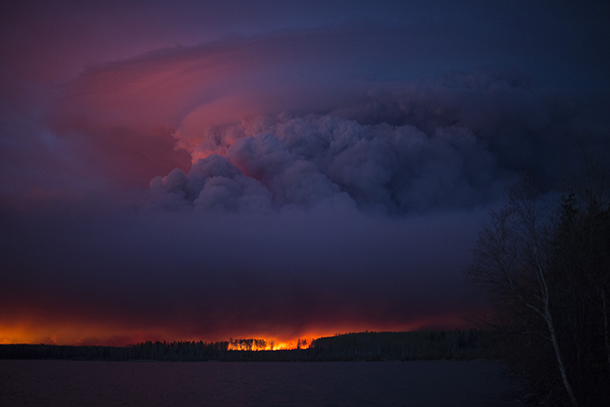 The fire that devastated much of Fort McMurray, seen here on the evening of May 4th, 2016, was so massive that it created its own weather in the form of towering “pyrocumulonimbus” clouds capable of generating lightning. (Photo: Chris Schwarz/Government of Alberta, Flickr CC BY-ND 2.0)

CURWOOD: Mike, you're an expert on wildfires. What drew you to this field?

FLANNIGAN: Well, I have two loves in terms of science, weather and fire. So when I was one, at my birthday I had a candle on my cake. I stuck my finger in that candle and forgot to remove it, OK?

FLANNIGAN: And they have a picture of me crying, and they did eventually let me move my finger away, but I was just sitting there with my finger because I was fascinated by flame. Right from day one I've always been interested in fire, and I've always been interested in weather. People used to ask me what I would be when I grew up. A weatherman. Big snowstorm big thunderstorms, too excited to sleep. I'd stay up and watch the storm all night, so I'm very fortunate. I get to study fire and weather. It's great.

CURWOOD: Mike Flannigan teaches at the University of Alberta and directs the university's western partnership for wildland fire signs. Mike, thanks for taking the time with us today.

The Guardian: “Spike in Alaska wildfires is worsening global warming, US says”