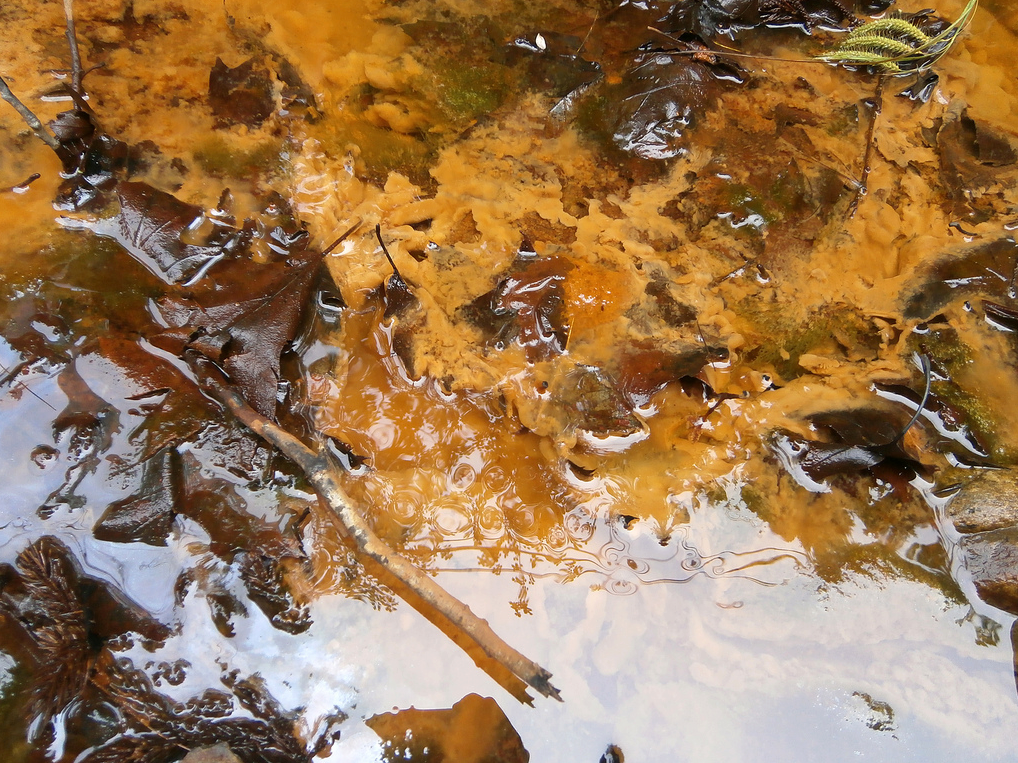 We revisit a report by Ari Daniel, who traveled into the field with microbiologists to report on some strange bacteria that consume iron and may help filter water in the future.

CURWOOD: It's Living on Earth, I'm Steve Curwood. In the quest to mend the ecological damage and imbalances humans are causing, many enterprising scientists are turning to the endlessly inventive natural world - for example bacteria that can metabolize oil spilled into the sea, or plants that take up toxic compounds. And such amazing life forms are everywhere. Reporter Ari Daniel discovered some scientists who are wading into a rust-colored ditch in Maine to find a whole ecosystem of unusual life forms.

DANIEL: When you think of life on Earth, plants and animals probably spring to mind. But there are species so odd – so unexpected that you’d never even dream them up. And yet, they’re often thriving in the most ordinary of places.

DANIEL: David Emerson parks his car at Ocean Point in Boothbay, Maine, and we hop out.

DANIEL on tape: So it’s kind of picturesque, and we’re on the side of the road standing next to kind of a ditch.

DANIEL: You brought me to a ditch. 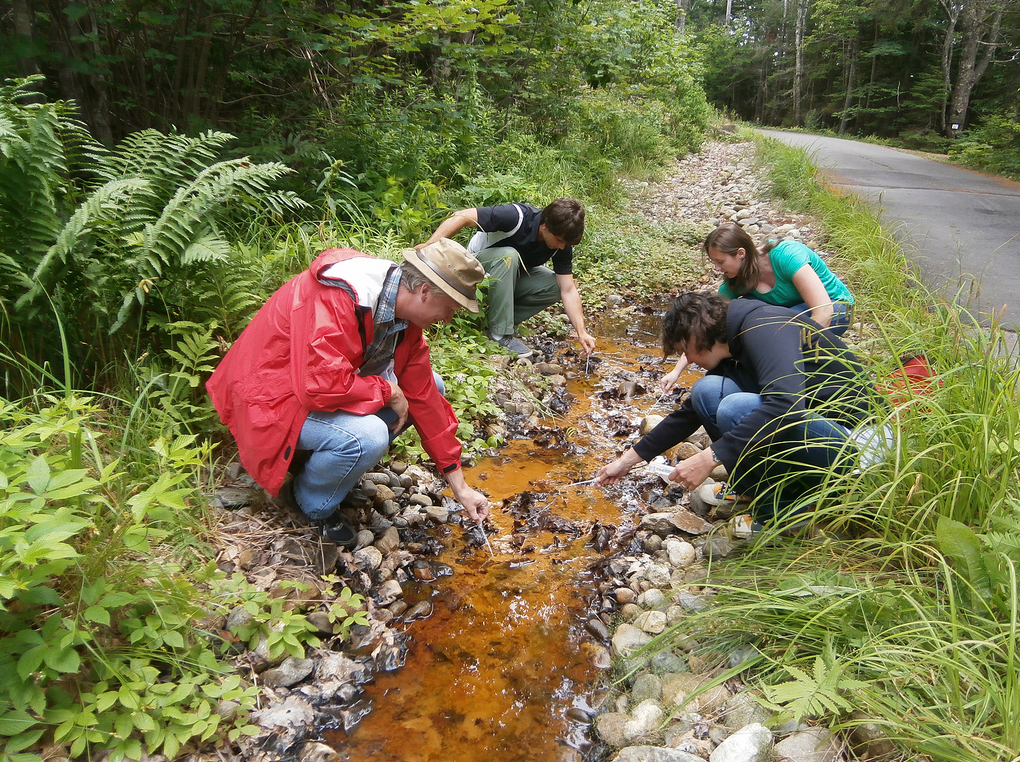 EMERSON: I brought you to a ditch! But it’s a unique ditch.

DANIEL: The ditch is filled with water the color of bright rust.

EMERSON: It looks like just rust and goo, and it is in a sense, but, I mean, this is all bacterial.

DANIEL: Ditches like this one are right up Emerson’s alley – he’s a microbiologist at the nearby Bigelow Laboratory for Ocean Sciences. And he studies the bacteria that produce this rusty goo.

EMERSON: So we’re primarily looking in this site at an organism called Leptothrix ochracea.

DANIEL: It’s a kind of iron-oxidizing bacteria, and these microbes have been pulling off an incredible feat for the last two to three billion years. They survive by feeding on the iron dissolved in particular water flows. It’s something that’s incredibly hard to do, because iron has so little energy.

EMERSON: And so that’s one of the reasons they’re interesting to us, is finding the most minimal amount of energy that an organism can use to survive.

DANIEL: Most people familiar with these bacteria, though, are not impressed. They tend to be annoyed.

EMERSON: Yeah, so I mean, these organisms are pretty heavily involved in fouling and corrosion of water pipelines.

DANIEL: There have been episodes when people turned on their taps and orange water gushed out. 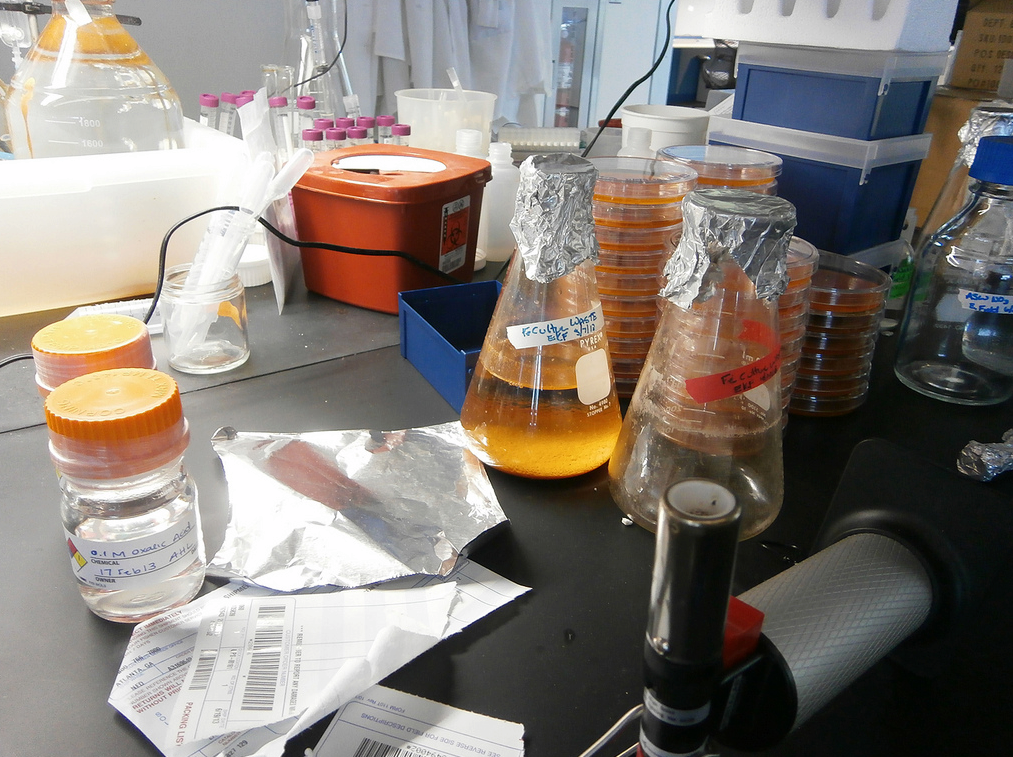 EMERSON: The entire system had gotten clogged with iron bacteria.

DANIEL: But they’re not all bad. Once the bacteria feed on the iron, it turns to rust, and that rust can grab onto stuff floating by – like arsenic, other harmful metals, even viruses. In other words, these bacteria can actually help filter water. And that rust – it’s remarkably delicate.

FIELD: I do find it beautiful. OK, if we bend over right here...

DANIEL: Erin Field – a microbiologist in Emerson’s lab – crouches down on one side of the ditch.

FIELD: We have this nice, fluffy matte. Like if you pulled out part of a pillow, it kinda reminds me of that. But then, you see within it, we have this really dark orange, almost looks like crumble topping, kinda like on a coffee cake.

DANIEL: So, in other words, in this ditch, we’re looking at an incredibly complicated ecosystem.

FIELD: Yes, we really are.

DANIEL: Another microbiologist – Emily Fleming – walks over to the ditch.

FLEMING: What makes them special for me is that when you look at them under the microscope, they make these amazing structures of either tubes or twisted stalks.

DANIEL: Fleming says that until recently, these bacteria were impossible to grow in the lab. It turns out that a ditch is a surprisingly complicated thing. So most of what we know about the bacteria dates back to the 1830s when they were first discovered.

FLEMING: So this leaves a huge area for us to be able to explore. It’s a mystery right in front of our eyes.

DANIEL: Recently microbiologists have figured out how to grow a handful of these bacteria species outside their natural habitat. 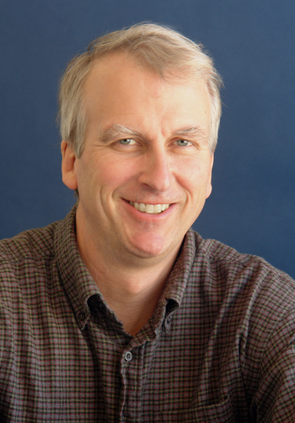 DANIEL: Back in his lab, Emerson is surrounded by vials and petri dishes, each one containing a small rusty sunset.

EMERSON: And so you can see all the rusty goodness, we call it.

DANIEL: Some of these bacteria belong to the genus Gallionella – they were collected from that ditch in the springtime. Emerson’s also got a handful of Zetaproteobacteria species that he discovered on the seafloor near Hawaii. He feeds his bacteria steel dust and makes sure they get just enough oxygen. The result is a lot of happy microbes. But there are still many species that refuse to grow in the lab. And there are basic features of all these bacteria that Emerson and his team just don’t understand. Like how exactly they feed on iron. Or what things all these bacteria have in common. And this is where a relatively new technique comes in – something that Bigelow Lab is becoming expert at. Sequencing the DNA from a single cell. Heres’s Erin Field again.

FIELD: It’s a really cool technique because it’s the only one currently where we can get DNA, and directly link it to a specific cell.

DANIEL: In the past, scientists needed lots of cells to get enough DNA. Now they need just one to spool out and read off the contents of an entire genome. Emerson says the technique’s being applied to all sorts of microbes that are difficult to grow in the lab.

EMERSON: That’s the beauty of these technologies that we are now able to ask questions that we just never could before. And that’s a really powerful tool for understanding this unseen world that is really a very important world to the functioning of the planet.

DANIEL: Emerson says it’s just a matter of time before we figure out how to harness these bacteria to improve our world – by filtering water, building mini-structures out of rust, and catalyzing reactions. Not bad for a group of bacteria dining on iron in a roadside ditch. I'm Ari Daniel.

CURWOOD: Our story on iron-oxidizing bacteria is part of the series, One Species at a Time, produced by Atlantic Public Media, with help from the Encyclopedia of Life.