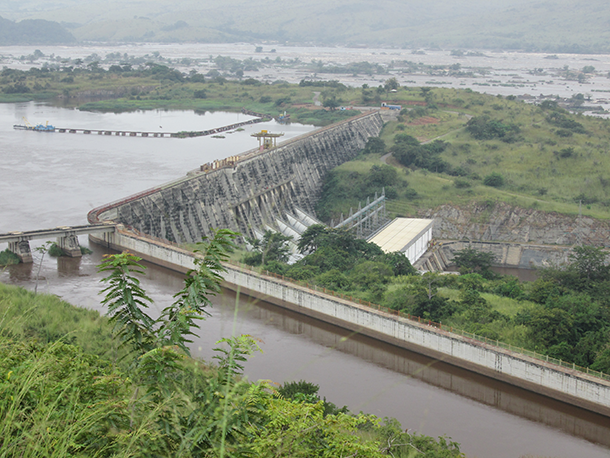 Inga 1 power station, the first of what the Democratic Republic of the Congo is planning to have as part of a massive seven-dam hydropower system, (Photo: International Rivers)

The Democratic Republic of the Congo is trying to build the largest hydroelectric dam complex in the world, the Grand Inga. Living on Earth’s Bobby Bascomb talks to Rudo Sanyanga of International Rivers about the Congolese government’s attempt to rush the project forward without a formal review of its environmental impact.

CURWOOD: Much of Africa is both poor and underdeveloped, lacking such basics as reliable electric power. But the Inga 3 Dam on the Congo River, part of Grand Inga, the world's largest hydropower scheme, has long been touted as a model for the Africa energy sector by the World Bank and the World Energy Council. Inga three would pump out 4800 megawatts of power, and the whole Inga system would generate 44,000 megawatts — bigger than China’s Three Gorges dam system. But things have not gone smoothly, and after long delays, the government of the Democratic Republic of Congo is pushing for a rapid start of construction, likely with Chinese dam builders. Yet there has been no Social and Environmental Impact Assessment of the project, and developing Inga 3 without it would violate national law, World Bank policies, and Chinese guidelines for overseas contractors. Living on Earth’s Bobby Bascomb went to get more details from Rudo Sanyanga, a dam opponent and the Africa Program Director of International Rivers in Pretoria, South Africa. 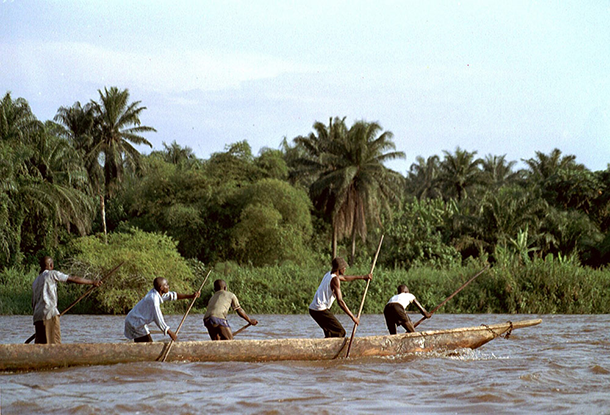 BASCOMB: Rudo Sanyanga, please tell me about the proposed Inga 3 dam and the Congo Dam complex. How should a project like this normally get started?

SANYANGA: Usually there is the Project Impact Assessment studies, which look at all possible impacts. It also ends up the impact studies with a decision on whether the project should go ahead or not based on the level of impacts. And if there is need for people to be displaced than there is also a resettlement action guide that is attached to that. The whole process especially for such a large project should take not less than a year, and will involve a lot of experts in various areas—geologists, sociologists, environmentalists, hydrologists—to make sure the project is done, or implemented with the highest world standards.

BASCOMB: And from what I understand the Congolese government doesn’t want to do an environmental review for this project.

SANYANGA: In March 2014, the World Bank approved 74 million US dollars, and part of that was to carry out technical studies, which included the environmental impact studies, the resettlement action guides, and compensation studies. Unfortunately because of some misunderstanding between the World Bank and the government of the Democratic Republic of Congo, the money has not been released. Nothing has started at all. The government of DRC is becoming impatient and they want to go ahead with the construction.

BASCOMB: Well if this dam proceeds as planned right now, how do you think the environment and local communities will be affected? I mean who lives along this river?

SANYANGA: There are a number of communities that live very close to the Bundi Valley and those will have to be moved. It’s estimated that 10 to 25 thousand and more as the dam stages increase. So those people will have to be moved and definitely be impacted. The level of impact will depend on how they are settled. Sometime some of the displacements and resettlements have moved people to a totally different kind of environment where they have no skills to survive. And sometimes much drier areas where they used to rely on flooding and river water and they have no access to that. And we’ve found a lot of communities that have been displaced by dams becoming impoverished because of that. 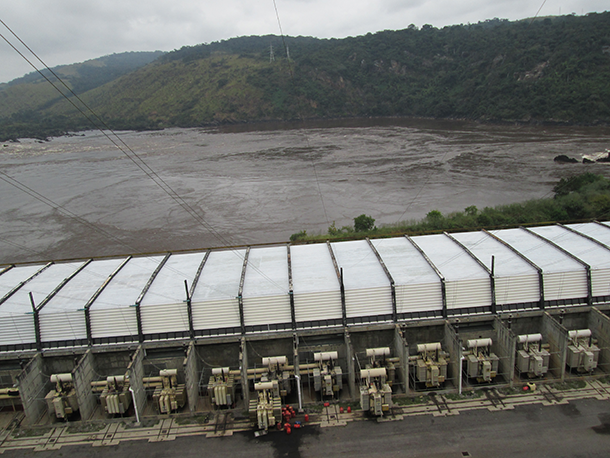 BASCOMB: What about wildlife? The DRC is known for biodiversity of its rainforest.

SANYANGA: Yeah but on the eastern DRC in this area there is not much big, large animals. There is aquatic life, and some endemic species are found around Inga falls. We don’t know what the diversion of water will cause to those animals. In addition there is also the Congo Plume phenomenon, which is the largest carbon sink in the world, on the Atlantic Coast where the Congo River pours its sediment. The sediments bring in a lot of nutrients and there are certain microorganisms that feed on those nutrients and use carbon dioxide from the air in their metabolism. So as they do so they absorb a lot of carbon dioxide and release oxygen, so it’s regarded as a carbon sink. And it’s going on a phenomenal level. We don’t know what the impacts will be because sediments will be trapped behind the dam walls and not all sediments will be able to reach the ocean. So those are some of the concerns and the issues we have raised, and which should, if an environmental impact assessment study was going to go on, should be answered by those studies. 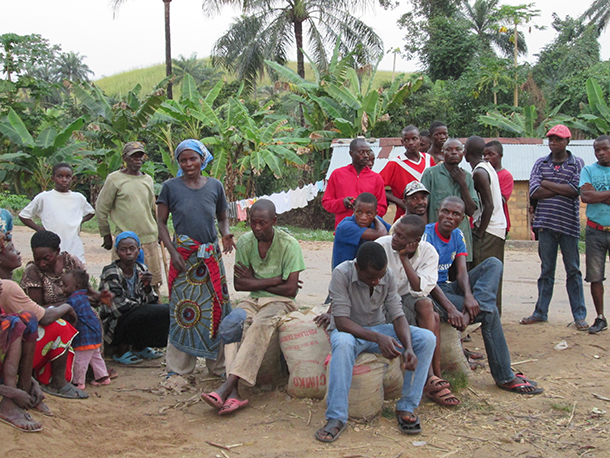 People who would be relocated for the construction of Inga 3 (Photo: International Rivers)

BASCOMB: The Democratic Republic of the Congo is a really poor country. They’ve seen a lot of war and instability. Supporters of this dam say they need it to bring energy to an impoverished country.

SANYANGA: Yes the DRC needs energy, but the model they are using doesn’t show that the energy will benefit DRC. Inga 3, generating 4800 megawatts, 2500 of that power will go to South Africa. 1300 is going to Katanga the mining town on the Southwestern side of DRC. And the remaining 1000 megawatts is targeted for Kinshasa. During transmission it’s projected that a minimum of 20% will be lost. So what it means if the agreement requires that the delivery is say 2500 megawatts to South Africa, and South Africa has to receive 2500, it means DRC from the Inga where they push the power on the transmission line, they have to push far more than the 2500 to make up for that loss. Which means the excess energy that is promised for people in Kinshasa will not be necessarily available at all times. Secondly, because of the infrastructure, which is outdated, it might not be able to transmit that remaining energy to Kinshasa. 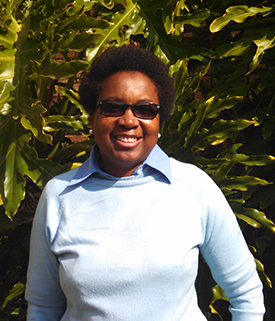 BASCOMB: And so the people living in the villages, not connected to the grid, are they going to benefit at all from this dam?

SANYANGA: Not at all. Even in the best of scenarios it is unlikely they would benefit because there is no grid connection to the majority of the country. It would be costly to connect all those people to grid connection in isolated villages. So the best way of supplying energy to these isolated villages in Africa is probably decentralized energy from perhaps solar, wind, and mini and micro hydro. So we are not necessarily opposed to all dams. It’s just there’s no proper plan on the table to show how this project will be implemented, how it will benefit the people, so that’s the concerns that we have.

CURWOOD: Rudo Sanyanga, the Africa Program director of International Rivers, in conversation with Living on Earth’s Bobby Bascomb. We asked the Embassy of the Democratic Republic of Congo for comment multiple times; they did not reply by our deadline.