On the high cliffs of the Pacific Coast, it’s nesting season for many birds, including common murres. BirdNote®’s Michael Stein describes the special adaptation these birds have evolved to keep their eggs safe. 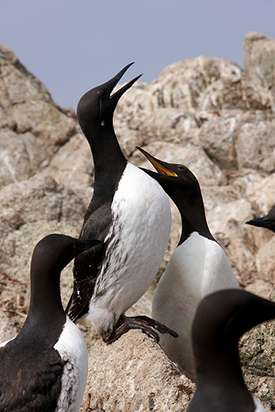 CURWOOD: We're taking flight to the high cliffs of the Pacific Coast now, where it is nesting season for many sea birds, and as Michael Stein explains in todays BirdNote® some birds lay eggs with a special adaptation to keep those eggs safe.

STEIN: Does this raucous laughter sound a little deranged, as it rings out above the crash of ocean waves? The voices belong to birds, to a nesting colony of Common Murres, standing on narrow ledges high on the steep face of a sea-cliff. Precarious as their nest site is, Common Murres nest by the thousands along the Pacific Coast, perhaps millions north along the Bering Sea.

The chocolate-brown murres stand nearly a foot and a half tall, on legs set far back on their bodies. Add to this their sharply pointed bills, and Murres look much like the northern equivalent of penguins of the Southern Hemisphere. 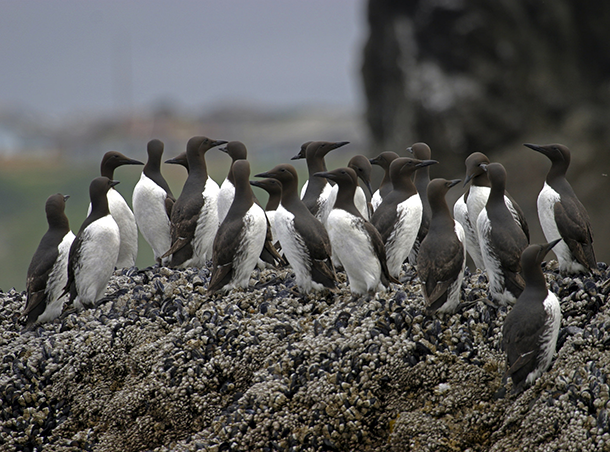 A flock of Common Murres on a seastack off the coast of Oregon (Photo: John Franklin, CC NC-SA 2.0)

Their eggs are specially shaped to survive a narrow cliff ledge. Shaped like a pear, the single, large, blue egg is pointed at one end and blunt at the other, so it spins on the ledge rather than tumbling into the sea below. The Common Murre's guttural call carries well over the roar of the waves, a natural laugh track, far richer than human laughter canned for a sitcom.

CURWOOD: For pictures, glide on over to our website—loe.org.


The BirdNote® story on the Common Murre

Watch a video of a Common Murre colony