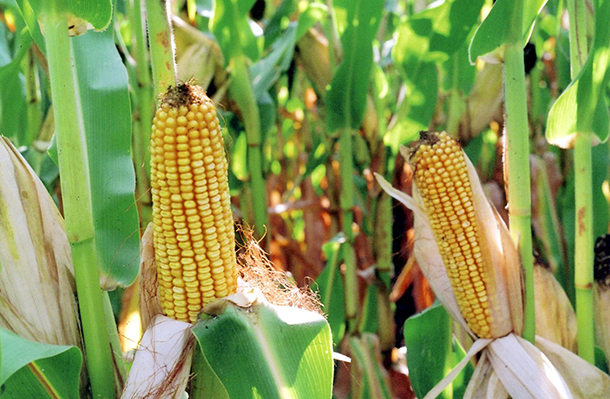 Congress just passed legislation to create a national GMO labeling standard. If signed into law, it would override more stringent measures that went into effect in Vermont on July 1st. Host Steve Curwood called upon Patty Lovera, the Assistant Director of the advocacy group Food And Water Watch, to explain the dangerous loopholes she sees in the bill.

CURWOOD: From the Jennifer and Ted Stanley studios at the University of Massachusetts Boston and PRI, this is Living on Earth. I’m Steve Curwood. Congress has passed a bill that would require processors to tell consumers which foods contain genetically modified ingredients, although there are important exceptions. This would pre-empt state measures, including a stronger labeling law in Vermont that went into effect at the beginning of July. The food industry is generally urging President Obama to sign it into law, but critics including Patty Lovera of Food and Water Watch say the legislation sells the public short and should be vetoed. Patty Lovera joins us now. Welcome to Living on Earth, Patty.

LOVERA: Thanks for having me.

CURWOOD: So what does this GMO bill at the federal level mean for consumers, should President Obama sign it?

LOVERA: So the bill is Congress saying that states cannot pass mandatory labeling laws and it replaces, you know, a good state law for somebody that went first and figured it out. It replaces that state law with supposedly a new national labeling system. But it's really filled with loopholes that aren't going to give people labeling. It has a terrible definition of what a GMO is, so it would leave a lot of things uncovered. The requirement itself of how you disclose gives companies an option of putting the words on the package, which you know that they don't want to do, or using things like a QR code which we think is not acceptable because lots of folks can't access that technology. It has no enforcement provisions. There's some concerns in there about how this definition, that poor definition, would be used in other parts of our food policy like the organic standards. The list just goes on and on and on, and we think the net effect is you're taking away state law that's providing labeling, and you're creating a system that’s really not going to result in meaningful labeling for consumers. 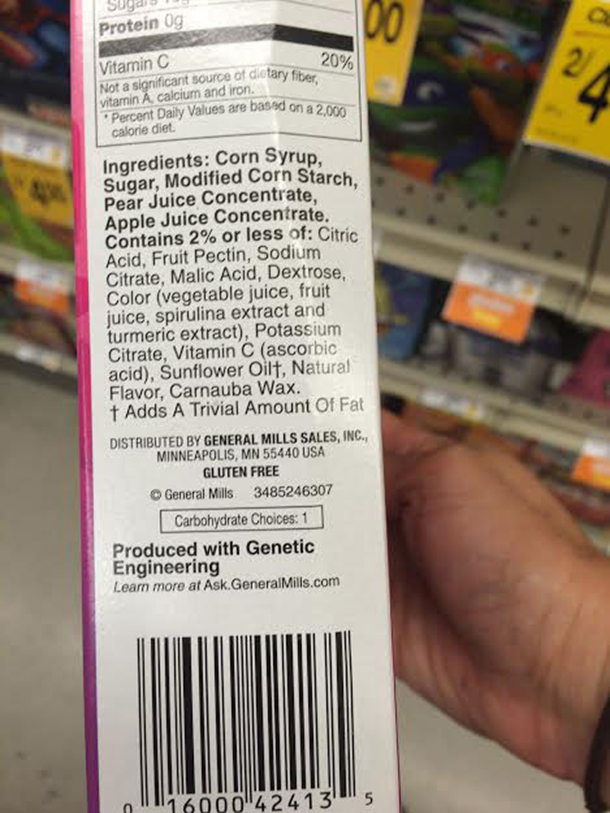 A GMO label on a product sold in Vermont, in accordance with their new GMO legislation. (Photo: Courtesy of Patty Lovera)

CURWOOD: What are your thoughts on another point of contention, namely that many ingredients derived from genetically modified crops wouldn't require a label?

LOVERA: Yes, there's a long list of problems...That's on it too. So they put a definition in the bill that there's a lot of dispute about. So the Food and Drug Administration wrote a memo that said, yeah, we read this definition as saying a lot of the current genetically engineered ingredients on the market, things coming from sugar beets, cooking oil from soybeans, things like that could be processed to the point they don't contain genetic material anymore and under this definition they may not be considered a bioengineered ingredient that would trigger labeling and then there's yet another piece of that definition that is causing a lot of confusion about the trait. You know, the reason the crop has been engineered as for some specific trait, and there's some very strange language in this definition. It has to be a bioengineered ingredient has a trait that can't be found in nature. Lots of traits can be found in nature. They just can't necessarily be found in these crops, so this definition is incredibly, incredibly worrisome and is one of those loopholes I'm talking about that may leave a lot of foods unlabeled in any useful way.

CURWOOD: You say this legislation will create a law that has no enforcement provision. How is it a law then?

LOVERA: [LAUGHS] It says explicitly that USDA could not order a recall for being mislabeled, and there's really no other provision. Most usually when you write a law, you say, “This is what the penalties are.” There's no penalty discussion in here, and when asked the supporters of the bill have said things like, “Well, if you're not being accurate, somebody could use state laws on fraud to go after you,” but that was a choice, and they chose not to put teeth in it. 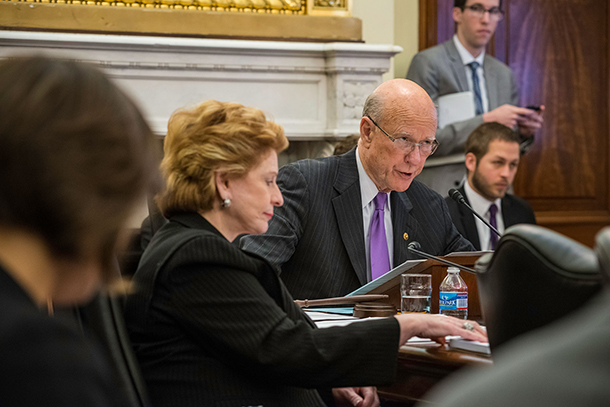 CURWOOD: Now, recently the National Academies of Science have found that GMOs are both safe and "no different from other foods". Given the official approval, why do you think it's important to label them?

LOVERA: So, we think that the debate on safety is not over yet. We actually had a number of critiques of the national academies paper and critiqued some of the folks who have to write it, many of whom had financial ties to the biotechnology industry. So, we think the science conversation is not over about safety, but when you don't tell people where they are, you're not going to be able to track if there's a problem. We're not telling people they are eating this to see if we can then later determined there's a negative effect. And then there are other reasons besides health. You might think about this technology. There's a tremendous, corporate kind of control facet to this issue in terms of patenting seeds, very expensive intellectual property agreements. There's lots of farmers who are concerned about GMOs. There's a chemical use, public health, worker health and environmental impact of the chemical use facet to this. This is a different way of producing food, and there's lots of reasons people might want to know about it and they might like it and want to seek it out and they need to know where it is. This is a really big fight over a very basic concept of just saying, “We used it or we didn't,” and then letting people decide for themselves.

CURWOOD: To what extent was this legislation written by industry in your view?

LOVERA: That is a great question that we don't get to know. So there's a tremendous...This legislation came out of the Senate. They tried to pass a different version in March, and the bill failed, and so after the failure in March the two leaders of the Senate agriculture committee, the Democrat and the Republican - Debbie Stabenow from Michigan is the Democrat, Pat Roberts from Kansas is the Republican - They went into these negotiations, and they wrote this new version of the bill. It never went through committee again. It never had a hearing. There were very few, I mean, essentially no opportunities for meaningful amendments, so that leaves us to wonder, “Who was in that room?” We weren't. Lots of other senators' offices were not. So, this to us has industry's fingerprints all over it, but we didn't see the process because process was very secret.

CURWOOD: What reading do you get from the White House? What will they be doing with this? 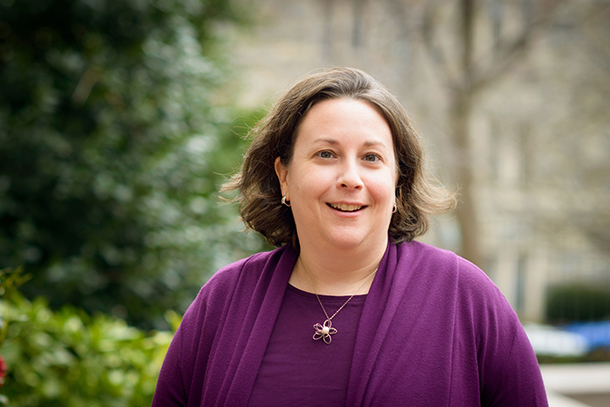 Patty Lovera heads up the food team at the non-profit Food And Water Watch. (Photo: courtesy of Patty Lovera)

LOVERA: Yeah, it's a good question what the White House is going to do. We have the secretary of agriculture who is a big fan of these QR codes. We've heard him talking about, "We need to solve this problem we have with this dispute about labeling." He's been saying that for over a year so that's worrisome for us. We had candidate Obama in 2007 talking about people who should know what's in their food. We should label GMOs, so we think we have work to do, and lots and lots and lots of folks are contacting the White House, and then you need to veto this bill and live up to the campaign promise. So it's not clear.

CURWOOD: So what's your ideal vision for a GMO labeling standard here in the United States?

LOVERA: Well, ideally we would have a national standard that gave people on a package, words on a package, mandatory labeling with a good definition. We don't have a Congress that's going do that. That's pretty clear. So in the interim if states were making progress on this, we think that's a good step, and this is how we change lots of laws. The states go first on lots of issues, and eventually we build to an acceptable national standard. This is the industry coming to Washington throwing their weight around and trying to stop the momentum that people have achieved at the state level.

CURWOOD: Patty Lovera is assistant director of Food and Water Watch in Washington. Patty, thanks so much for taking the time.

LOVERA: All right, thanks for having me.