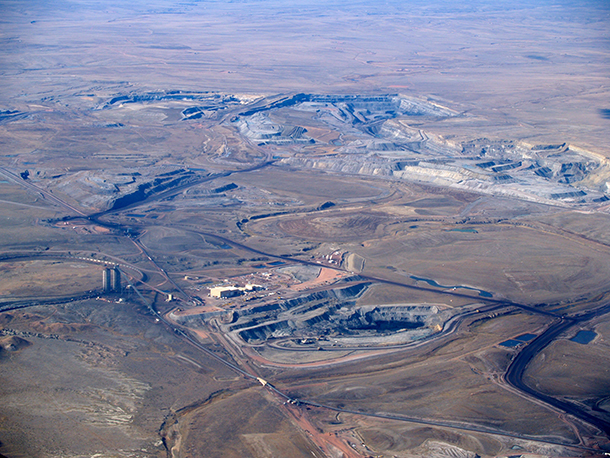 41% of US coal production comes from publicly owned lands, most of it in the Powder River Basin in Wyoming and Montana. When companies pay less to lease this land and game the royalty system, it’s taxpayers who get shortchanged. (Photo: WildEarth Guardians, Flickr CC BY-ND-NC 2.0)

CURWOOD: It’s been six months since the Obama administration put a moratorium on new coal leases on public lands. During the planned, three-year pause the Department of the Interior is reviewing its management of taxpayer-owned coal, including its impact on global warming. And earlier this month, Interior moved to close a major loophole that has left royalties paid to the government artificially low for decades. We called up Michael Greenstone, a former chief economist for the Obama White House to explain. Professor Greenstone now teaches at the University of Chicago. Welcome to Living on Earth.

CURWOOD: So, let's go with the basics at first. How does public land get leased for coal extraction? What's the process?

GREENSTONE: So there's a three part process. The first is that the federal government puts up tracts of land that are eligible to be released, and then companies can bid an amount to have access to that land. That's called the bonus bid, and then after that they pay a rental fee of $3 per year per acre, and then finally they pay a production royalty fee, which is supposed to be 12.5 percent of the value, whatever comes out of the land.

CURWOOD: What's wrong with the present system in your view? 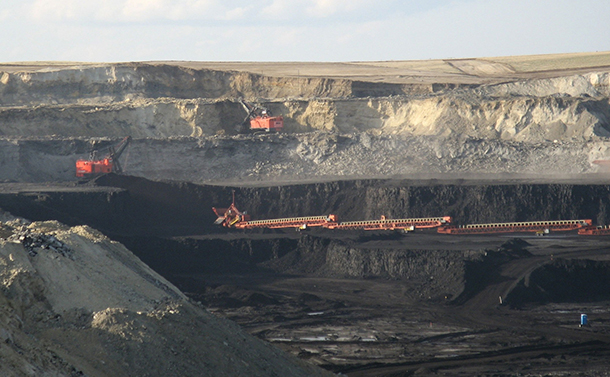 The coal mined on government land in Wyoming and Montana is about 70% cheaper, per unit of energy it contains, than its Appalachian counterpart from private mines. The publicly mined coal price is kept low largely by the government’s outdated leasing system. (Photo: Greg Goebel, Flickr CC BY 2.0)

GREENSTONE: Yes, so there's a few things that smell a little fishy about the current system. First is that in the bonus bid phase, where different companies are in principle bidding and the taxpayer is being protected by them competing against each other, you actually have, according to a GAO report, that 90 percent of the leases since 1991 have had only one bidder. I'm not an expert at bidding on coal land, but if I didn't have to compete against anyone, I'm pretty sure I could get a good price.

CURWOOD: OK. So the bidding system is suspect. What about the next phase?

GREENSTONE: So the rental fee, that seems straight forward. Companies pay $3 per year per acre. But the third phase, the production royalties phase, also has a feel that something might not be quite right. There, the way it's supposed to work is that the federal government should collect 12.5 percent of whatever the value of the product is, in this case of coal. But recent investigations suggest that actually what is happening is that the bidder is selling the coal to a company that it has partial ownership in at a very low price, and then the 12.5 percent is collected on that low price, and then that company that is partially owned or wholly owned by the original leaser then sells it at the global price for coal. And in that sense, the 12.5 percent is being collected on a much smaller number than is fair.

CURWOOD: So talk us through the new Department of Interior regulations. How are they going to change that system? 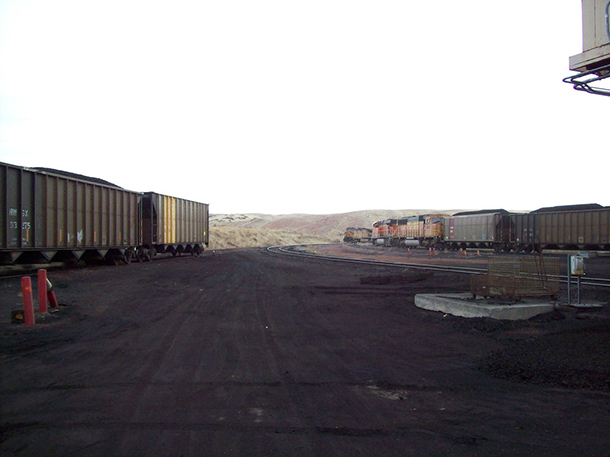 Though many government regulations account for the social cost of carbon – an economic metric set at $40 per ton – environmental damage is not a factor in our current coal leasing system. That helps explain why the environmental cost of coal is a whopping six times than its market value. (Photo: Stannate, Flickr CC BY 2.0)

GREENSTONE: The idea is a requirement that the 12.5 percent be collected on an arm's length transaction. So that is effectively on the final price and not on what I sell it to my brother or what I sell it to my cousin for. So, yeah, I think when one examines a coal leasing program, a different area that is probably not working as well as it should is that the environmental impacts of the leasing coal are not taken into account in the leasing program at all. The US government has something called the social cost of carbon, and that's a monetary value of the damages associated with the release of an extra ton of CO2 into the atmosphere. The number that they use - and full disclosure, I was working in the Obama administration and helped develop that number - but the number they use is $40 a ton. So that is an extra ton of CO2 emitted into the atmosphere is expected to cause $40 worth of climate damages.

CURWOOD: And how much does coal cost in the marketplace?

GREENSTONE: So, what's fascinating is the spot price, or the value of a MMBTU of coal is about 66 cents. The climate damages associated with that same MMBTU are about $3.89. So just to put that in very plain English, the climate damages are about six times the market value of the coal. I don't think that one has to be a raving environmentalist to think, “Hey, maybe that's not a good deal.”

CURWOOD: So, how often does the government take into account the social cost of carbon when setting regulations?

GREENSTONE: Yeah, so the U.S. government first set a social cost of carbon in 2009, and then there was very small revisions of it in 2010 and I think again in 2013, and it has at this point been used in scores of regulations. And so basically any regulation that has carbon reduction, be it café standards or energy efficiency standards, all have the benefit of those regulations, reductions in CO2. And what the social cost of carbon does is it allows one to convert those tons of CO2 into dollars, and that way one can compare the benefits of regulations that have CO2 as a benefit to the costs which are measured in dollars. The way that this could be incorporated into the leasing of access to fossil fuels on federal lands, be it coal, natural gas, or petroleum, would be if we return to the bonus bid phase of the auction, and in that phase one could just set a reserve price, and that reserve price would be equal to the climate damages, and so if no one was willing to pay more than that reserve price, that is the environmental damages, then the resource wouldn't be used, but if its use in the marketplace was more valuable than that environmentally determined reserve price, then the resource would be used and provided all the benefits that energy helps to provide. 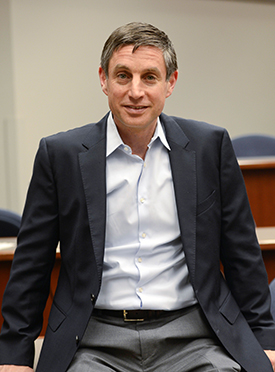 Michael Greenstone is the Milton Friedman Professor of Economics at the University of Chicago, where he directs the Energy Policy Institute. (Photo: Matt Marton)

CURWOOD: So, that would be a piece of change. Not only would you be paying a one-time leasing fee but you'd essentially be paying the surcharge on a lifetime of extracting. But this would effectively mean, leave it in the ground.

GREENSTONE: Well, that depends on the resource. In the case of Powder River Basin coal, on average, the kind of damages are much larger than the market value and I think many tracts would then become non-economical to utilize. But in the case of natural gas and the case of petroleum, the benefits measured by the spot price that those resources go for, exceed the climate damages and I think we would continue to use them, although there would be a greater collection of revenue for the federal government that could be used for a variety of things.

CURWOOD: So how would this affect export coal?

GREENSTONE: This would probably reduce exporting of coal, and I think what is at the heart of that question is that emissions have the same effect wherever they occur, and this would mean that we were not just simply transferring emissions from the United States to another country.

CURWOOD: Is that what we're doing now?

GREENSTONE: There's a risk that when we have things like the Clean Power plan that it becomes expensive to burn coal in the US power system and that the coal gets exported elsewhere and used elsewhere. By embedding the social cost of carbon, or the monetized value of climate damages in the initial leasing price, that is a hedge or a safeguard against them.

CURWOOD: So, what do you say to people whose say, you know, we just can't trust the markets to get us off dirty fuels.

GREENSTONE: Well, they are right about that in the following sense. We have not set up markets by and large where the prices of energy reflect the damages of different fuels, and we're just beginning to alter markets. But markets in the end of the day give us what we asked them to give us, and so, as long as prices don't reflect climate damages, we will make choices that don't take account of that.

CURWOOD: Michael Greenstone is at the University of Chicago where he directs the Energy Policy Institute. Thanks for taking the time with us today.

GREENSTONE: Thank you for having me, Steve.


The Department of the Interior’s press release

Inside Climate News: “White House: Raising Coal Royalties a Boon for Taxpayers, and for the Climate”

The White House Council of Economic Advisors’ report: “The Economics of Coal Leasing on Federal Lands: Ensuring a Fair Return to Taxpayers”

Michael Greenstone for The New York Times: “There’s a Formula for Deciding When to Extract Fossil Fuels”