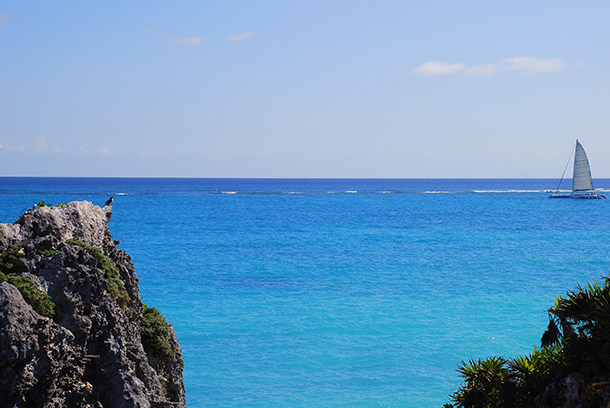 Scientists have found that a current in the Caribbean Sea reverberates to make a “whistle”. (Photo: Sushant Jadhav, Flickr CC BY-NC-ND 2.0)

Some ocean waves are for riding, and some “whistle.” A current in Caribbean Sea reverberates like it’s in a 120-mile long flute, according to satellite data. Joanne Williams of the UK’s National Oceanographic Centre tells host Steve Curwood that if it’s sped up and sonified, the note of this super-long wave resonates with A Flat.

CURWOOD: Sailors grow misty-eyed, dreaming of the song of the sea, but many folks see that description as merely a charming metaphor. But now science has caught up with art and reports that, yes, the sea does sing in a way – and it sings a very deep A-flat. Researchers at the UK’s National Oceanographic Centre in Liverpool have recently discovered that a cyclical pattern of water flow in the Caribbean Sea resonates in a way that can be detected from outer space. Researcher Joanne Williams is part of the Liverpool team looking at this phenomenon and joins us now. Welcome to Living on Earth.

CURWOOD: So, your team is looking into this cyclical pattern of water flow in the Caribbean that makes a whistle. Please explain to me, what are the mechanics of how a whistle would work here.

WILLIAMS: OK. So, in a whistle that you blow down as an instrument, you've got a current of air going through the whistle and it resonates with the frequency that fits nicely in that size of instrument and that's the sort of thing that we've got going on the Caribbean. So we've got a current of water, the Caribbean current, going right through the basin, and the wavelength that fits nicely in that basin just happens to be the right wavelength that also likes to resonate at that latitude in the ocean. So it's the Rossby wavelength. 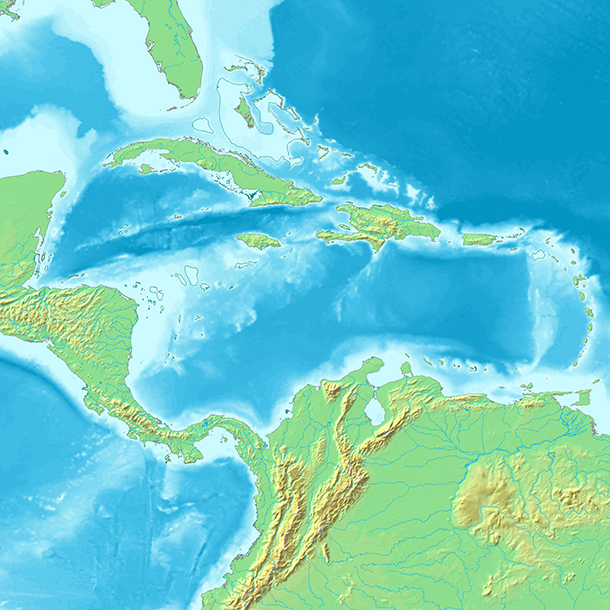 A still from a video showing how the wave propagates (Photo: University of Liverpool)

CURWOOD: So, tell me what is a Rossby wave, and how is this different from any other kind of wave?

WILLIAMS: So, a Rossby wave is a very low frequency wave that you can get anywhere in the oceans, and what you have to understand is that you get very high frequency waves, the sort of thing, if you stand on the beach, you can watch the surfers, and they are coming in every couple of minutes, and then you get these very, very low frequency things that take days or months to cross the ocean. And Rossby waves are a particular wavelength according to the latitude in the ocean. And at the Caribbean, it would take about 120 days to cross the Caribbean basin which is 1,000 kilometers.

CURWOOD: So, these are called Rossby waves. Who is Rossby?

WILLIAMS: Rossby was an early 20th century scientist who studied waves in the atmosphere on Earth. But those studies also applied to the ocean.

CURWOOD: Well, let's take a listen to this wave, except I guess we can't really hear the wave itself because, how low in frequency is it? Remind me, please.

WILLIAMS: It's about 30 octaves below what you would find on a piano. So nothing can hear this.

CURWOOD: Not even very Barry White's voice is going to get down there, I guess, huh?

WILLIAMS: Not even Barry White. [LAUGHS]

CURWOOD: Well, let's take a listen to the sound as it is sped up how many times? 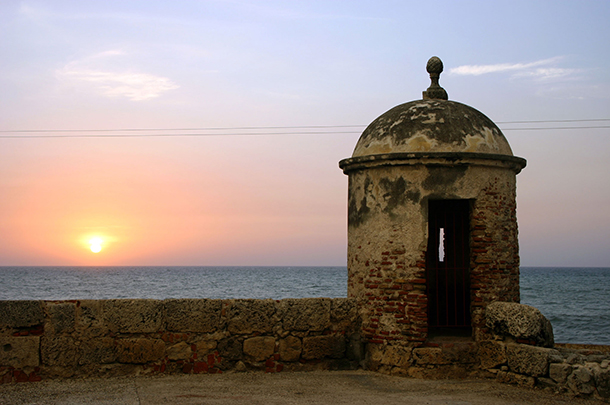 Cartagena, Colombia, one of the places most seriously threatened by sea level rise in the Caribbean (Photo: Igvir, Wikimedia Commons CC BY-SA 2.0)

[SOUNDS OF THE WAVE]

CURWOOD: So, in musical terms, what key is this whistle in?

WILLIAMS: So, this whistle...It plays A-flat. But it's an A-flat, 31 octaves below what you can hear. It's very, very low indeed.

CURWOOD: Now, when an orchestra plays an A, it’s very nice. When it goes down, when it flats down to an A-flat, it really warms things up. So we have a warm wave here.

WILLIAMS: [LAUGHS] You could call it that, suitable for the Caribbean.

CURWOOD: So, where else might you find this on the planet?

WILLIAMS: So, you might see it in other enclosed seas, but the particular thing with the Caribbean is that it's just exactly the right length to fit in the Rossby wavelength. So you get a lovely resonance there, an echo chamber, if you'd like.

CURWOOD: So, of course, when you say this can be heard from space, you need air to actually hear things. So this is a metaphorical thing that you're saying about it being heard from space. 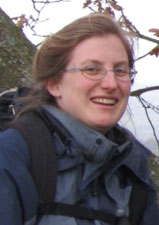 CURWOOD: How high is this wave?

WILLIAMS: It's only a few centimeters, a few inches if you'd like. Down in the Caribbean, they haven't got very big tides, so it's big enough to show up.

CURWOOD: So, how do these findings inform our understanding of sea level rise, especially in terms of coastal communities? And of course we’re concerned about sea level rise with our changing climate.

WILLIAMS: Absolutely. What this will help us do is take out one of those signals from the sea level records. The more signals you understand, if you can take those out of the record, then what's left, it's easier to fetch trends and understand what's going on with the long term rise and also to make predictions of what you might see over the next couple of years and whether, for example, one of the peaks in this wave might coincide with other peaks and cause a particular flooding incident. When you find a strange signal in an old dataset it's really nice to know where it comes from. It's very reassuring when you find that it fits in nicely with all the ocean physics that you understand already.

CURWOOD: Joanne Williams is with the National Oceanography Center based in Liverpool, England. Thank you so much for taking the time with us today thank you very much and may the wave be with you.


Watch and listen to the Caribbean Sea’s Rossby wave, sped up to the audible range

RT News: “Caribbean Sea emits mysterious noise which can be ‘heard’ from space”