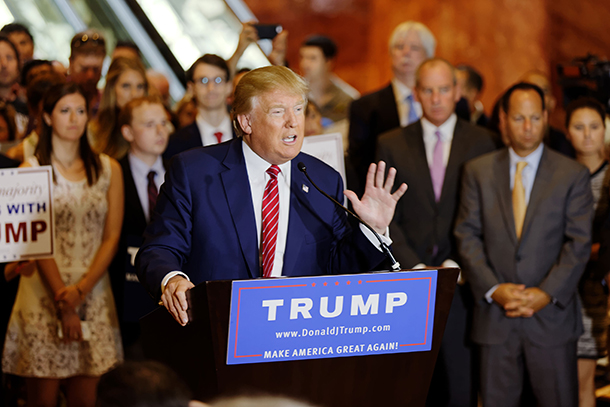 The Republican National Convention mostly ignored global warming and the environment. Meanwhile the GOP platform proposes dismantling the EPA, and calls coal an “abundant, clean, affordable reliable” energy source. Peter Dykstra of EHN.org and host Steve Curwood reflect on the convention and the Republican priorities the platform lays out.

CURWOOD: Time now to check in with Peter Dykstra, who watched the Republican National Convention in Cleveland from his perch in Conyers, Georgia. Peter is with Environmental Health News, that’s EHN.org and DailyClimate.org. Hi, Peter, what’s beyond the headlines regarding the nomination of Mr. Trump, and the Republican Party platform?

DYKSTRA: Well hi, Steve, you know, there were if any voices speaking out for the environment at the convention, and some Republicans who still might be inclined to do so stayed away from Cleveland entirely. Of the three Senators who sided with Democrats on the Clean Power Plan, only Susan Collins of Maine was there. Of the 13 GOP Congressmen & women who voted for a resolution last year acknowledging that climate change was real, only five made plans to go to Cleveland, and their absence means that even a moderate voice on these issues had left the building, and if you want some evidence for that, let’s page through the Republican National Committee platform adopted this week in Cleveland.

CURWOOD: The distinguished gentleman from Georgia has the floor.

DYKSTRA: Thank you Mister Host. Let’s start with one thing that defies the partisan divide: The GOP calls for modernizing the electric grid, something that people from all political sides say is a good idea.

CURWOOD: Yeah, but I don’t see anyone rushing to pay for it.

DYKSTRA: Yeah you’re probably right. The GOP platform is opposed to labeling food products containing GMOs. It calls for full steam ahead on exports of oil and natural gas, and it wants the management of most public lands handed over from the Feds to the states. And the platform stops barely short of diving into the climate denial language we’ve heard from Mr. Trump and from his running mate Mike Pence and virtually every one of the other GOP candidates who competed with Trump for the nomination.

CURWOOD: So just what exactly did they say? 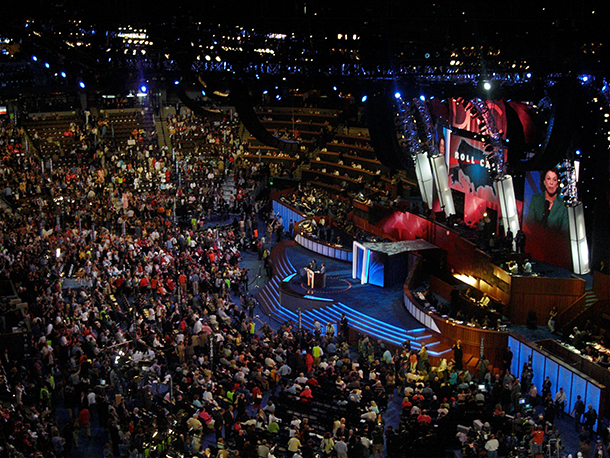 DYKSTRA: Well, the platform took a slap at the assessment that climate change will be a major global security issue, something that President Obama and the Pentagon have said. But they go as far as many GOP Senators, Congress people, and Presidential candidates who’ve said that climate change is a hoax. The platform also denounces the Kyoto Accord from the 1990’s, last year’s Paris climate agreement, and efforts by the UN to assess the science and pay for climate action. And the GOP pointed out how drought, extreme weather, and wildfires have been wreaking havoc lately, but they made no mention at all that climate change might have something to do with it all.

CURWOOD: Peter, how much attention did climate, environment, and energy get at the Convention itself beyond the platform?

DYKSTRA: Well here’s one. Shelley Moore Capito the West Virginia Senator pretty much blamed President Obama and Hillary Clinton for the 30 year decline of the coal industry. And I was thinking about how hard it would have been to go after job killing regulations after the roll call vote that officially nominated Donald Trump. Y’know, the traditional thing where each state delegation boss brags about their college football team, or how they’re America’s leading producer of bauxite or pecans or hubcaps.

CURWOOD: Yeah, a lot of the states bragged on about how well their economy is going, so it was a little hard to turn around and crucify the “job-killers” on the other side. What were some of the other enviro highlights from the floor speeches?

DYKSTRA: Donald Trump’s family acquitted themselves really well, particularly Donald Junior, who got in a few jabs at EPA and regulation. And of course, potential First Lady Melania Trump delivered an exemplary take on re-use and recycling.

But back to the platform for a minute, since we’re talking about something less than a love-fest for EPA. Donald Trump says he’d like to seriously shrink EPA; the GOP platform plays it a little differently, calling for EPA to be shrunken to a non-partisan Commission like the Nuclear Regulatory Commission, and give most of EPA’s enforcement and inspection duties back to state governments. 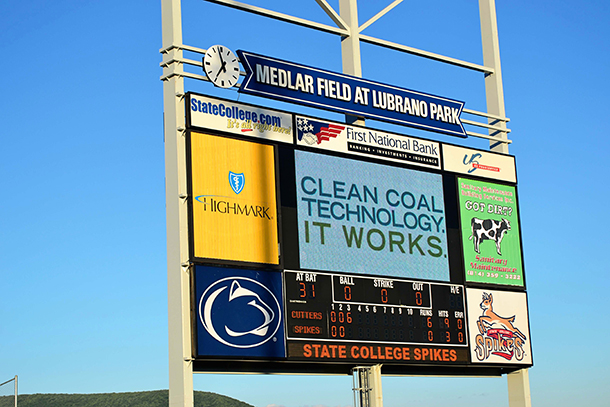 A Penn State scoreboard touts 'clean coal', a concept that has yet to find a cost effective technology. RNC politicians spoke in favor 'clean coal' at the convention. (Photo: America’s Power, Wikimedia Commons CC BY 2.0)

DYKSTRA: Well, first let’s look at NRC as a role model. Its members are appointed by the President and approved by the Senate. Two of the five Commissioners were appointed by Obama, and one is a holdover from the Bush Administration.

CURWOOD: I got a math problem here. There are supposed to be five. You only named three. How about the other two?

DYKSTRA: What other two? One of the five commission seats has been vacant for eighteen months, because President Obama and the Senate are soooo non-partisan with each other, the fifth seat opened up last month. So I’m not sure that NRC is such a great example of a functioning, non-partisan agency. And in terms of ceding EPA’s duties to state governments, that’s already been done in many places, and it’s not going very well, with factories, sewage plants, and waste dumps going un-inspected for long periods of time. But let’s move on to my bar-none, most favorite environmental thing from this convention and its platform.

CURWOOD: Does we need to offer a listener advisory?

DYKSTRA: Probably not, but listeners please keep safe with the eye-rolls and face palms. A proposed plank in the GOP platform said that coal was “an abundant, reliable, affordable energy source.” But not so fast. Some objected. So Texas delegate David Barton poured coal ash on troubled waters by offering an amendment, which passed by acclamation. The Republican National Committee now endorses coal as an “abundant, clean, affordable, reliable energy source.”

CURWOOD: Hmmm…Hasn’t the Federal government already poured a few billion into “Clean Coal” research with little to show for it?

CURWOOD: So – well, next week, can we talk about the Democrats and their convention, Peter?

DYKSTRA: Absolutely, there’ll be plenty of fodder there as well.

DYKSTRA: Thanks a lot Steve, talk to you soon.


GOP platform on energy and environment

Mother Jones: “The GOP Convention Is Way Too Hot for Republicans who Want to Solve Climate Change”