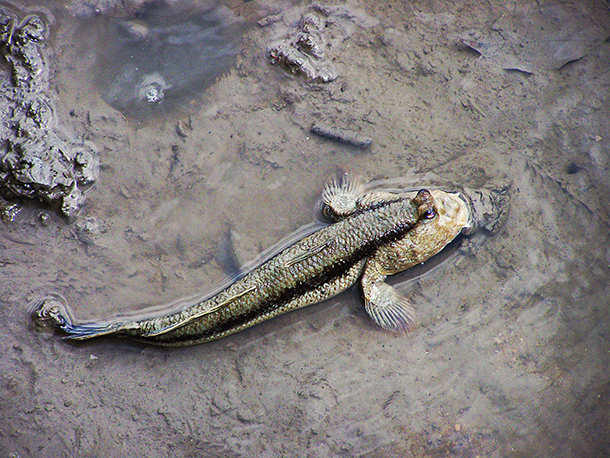 You might imagine that amphibious fish, like mudskippers, which spend time in water and on land, would be a rare phenomenon. But Australian researchers now say that the evolution of amphibious fish is more common than we thought. In fact 130 species of fish from 33 families have evolved amphibious behavior, as Living on Earth’s Don Lyman reports.

CURWOOD: In a minute, plumbing the depth of support for America’s national parks, but first this note on emerging science from Don Lyman.

LYMAN: The mudskipper is a funny looking fish with bulging eyes, and foot-like fins that it uses to hop and crawl around on the slippery flats of the mangrove swamps. It’s at home both on land and in water, and if you’ve ever seen one, you can easily imagine the day in prehistory when it first developed this adaptation and crawled out of the sea.

Now Australian researchers say that the evolution of amphibious fish – fish that spend time in and out of water – is more common than we thought. The challenges of breathing air and moving about on land might seem daunting for fish, but biologists from the University of New South Wales report that 130 species and 33 fish families have managed to do it. And species from four families of fish, including gobies, blennies, and eels can spend hours or even days out of water.

Amphibious fish exist in all climate regions, and in both fresh and sea water, though they are far more common in saltwater habitats, particularly in the intertidal zone. Intertidal areas vary widely in conditions such as water temperature and the amount of dissolved oxygen, and daily tide cycles expose marine organisms there, including fish, to both sea and land conditions.

The researchers say that water temperatures in the intertidal zone often increase as the tide recedes, particularly in pools at low tide. Since increased temperatures reduce the amount of oxygen dissolved in water, they believe that could serve as a stimulus for fish to leave the water – and head for more hospitable habitat on the land. That’s this week’s note on emerging science. I’m Don Lyman.


Read the study: “Repeated evolution of amphibious behavior in fish and its implications for the colonization of novel environments”