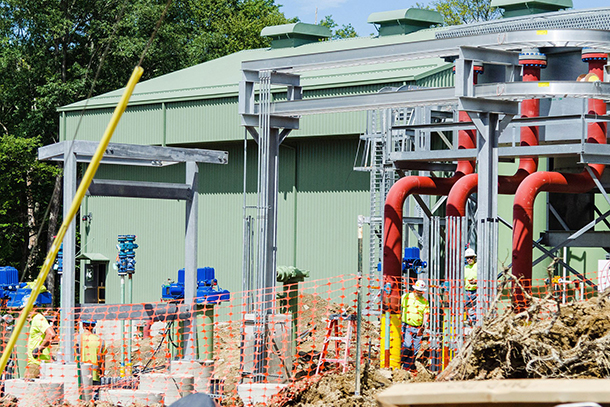 Compressor stations, like this one near Milford, Pennsylvania, are critical—if not well-known—components of the nation’s energy infrastructure. They are needed every 40 to 100 miles along pipelines to re-pressurize natural gas and keep it moving over long distances. But the possible health impacts of these facilities are just now being studied by researchers. (Photo: Anne Meador / Cool Revolution via Flickr)

Compressor stations that pressurize gas to keep it flowing through pipelines have proliferated across the country as the natural gas industry expands. But some residents who live near these compressor stations in Ohio complain of health problems that they link to the new facilities.

CURWOOD: Another flashpoint has emerged in the fracking controversies – compressor stations.
Hundreds of miles of new pipelines are in the works to transport shale gas to market.
And to move that gas, compressor units must also be built. From the Marcellus shale region, the Allegheny Front’s Joanna Richards has our report.

RICHARDS: 300 people crowded into a school gym in Medina County, Ohio, in February, to lob questions, concerns and some unvarnished anger at state environmental regulators.

MAN AT MEETING: Building this compressor station so close to people’s homes speaks of greed over safety.

SECOND MAN: The Ohio EPA is not here on our side (APPLAUSE). We have to stand up! (LOUDER APPLAUSE)

Compressor stations are needed every 40 to 100 miles along pipelines, to re-pressurize the gas and keep it moving. Like other industrial facilities, they are allowed to emit limited amounts of air pollutants. Ohio EPA and energy companies say the facilities are safe and well regulated. But some people who live near them say the pollution is making them sick.

BARRY BOOTH: The dogs stick their nose to the door, turn around and come right back in the house.

RICHARDS: Barry Booth says his dogs gave him an early sign something was wrong with the air at his Carroll County home, in eastern Ohio. In 2013, pipelines, wells and compressor stations had sprouted up all around him. Booth, who’s retired from manufacturing, didn’t have a problem with this. He’d even signed a lease agreement with Chesapeake Energy to make some extra money. Then one day he went to get his wife, Mary Booth, a cup of coffee. He landed on the floor, nauseated and dizzy.

MARY BOOTH: I jumped up to check on him, and then ended up beside him. It was just really hard to breathe, and the odor was very strong. 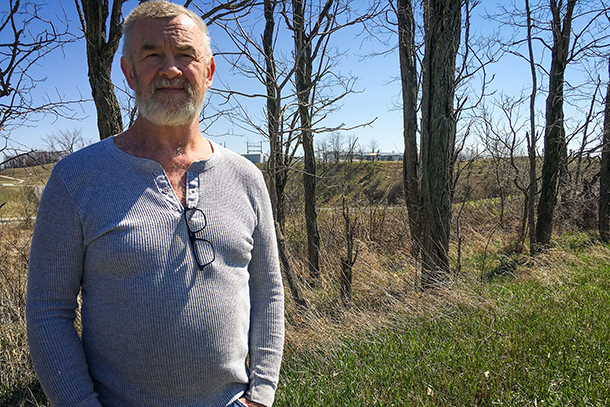 Carroll County resident Barry Booth stands near his home, which is within sight of a natural gas compressor station. He believes emissions from the facility have contributed to his family's health problems, including nausea, rashes, nosebleeds, headaches and his wife's breast cancer. (Photo: Joanna Richards)

RICHARDS: The Booths say they started having rashes, nosebleeds and headaches.
The couple blames air emissions from the nearby gas facilities, especially a big compressor station. That facility’s permit allows it to emit limited amounts of carbon monoxide, volatile organic compounds, and particulates, among other pollutants.

There hasn’t been a lot of research on the health impacts from oil and gas development, especially focused on just compressor stations. So how worried should people be? That’s what Trevor Penning is trying to figure out. He leads the Center for Excellence in Environmental Toxicology at the University of Pennsylvania.

Penning and some colleagues compared health trends in neighboring counties with and without heavy gas development.They analyzed all inpatient hospitalization records between 2007 and 2011 - 92,000 records in all. Wayne County, without fracking, followed the national trend of declining hospital admissions. But in Susquehanna and Bradford counties, where gas extraction had taken off...

PENNING: There was an increase in inpatient hospitalization rates, which comes out to be about 3 percent per year.

RICHARDS: Penning says that’s significant, and many of the health issues were things you’d expect from air pollution, like heart problems. His study didn’t measure pollution levels, or possible sources.

PENNING: I actually feel that many residents who feel their health has been affected by this activity need to be listened to.

RICHARDS: As more pipelines are built, more people outside drilling regions now find themselves near compressor stations, too. That’s why David Brown says it makes sense to try to single out these facilities for research. He’s a public health toxicologist with the Southwest Pennsylvania Environmental Health Project, a research and advocacy group. It’s funded in part by the Park Foundation, which also supports this reporting project.

Brown heard complaints from people in the town of Minisink, New York. There was a compressor station there, but no other gas activity. He says the closest regional air sampling station - part of a federal monitoring network - showed pollution levels in compliance with federal standards. But when he did air monitoring in people’s homes near the compressor station, particulate matter tested higher than the regional numbers. He also had residents keep health diaries, and Brown says there were problems.

BROWN: When somebody’s child wakes up with nose bleeds in the middle of the night regularly, then they know something is going wrong. Although they’re told that the child should be all right because the air standards aren’t being violated.

RICHARDS: Brown says the federal standards aim to improve overall regional air quality, but they’re not designed to protect people from frequent, close-range pollution exposure. Brown’s research project was small, but he says his findings and others’ suggest compressor stations alone can be powerful polluters. Federal studies near two compressor stations in Pennsylvania found fine particulate matter and other pollutants at levels that could be harmful to people’s health - although those studies, too, say their findings are limited. 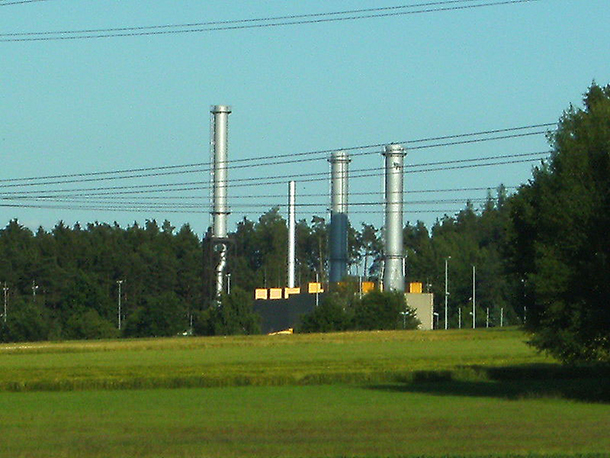 HOPKINS: It would be nice to be able to have an employee out at every single facility on a 24-hour basis to verify compliance, but the reality is that we can’t afford to have that level of staffing.

RICHARDS: And an industry spokesman says, when it comes to compressor stations, activists are making a mountain out of molehill. Jimmy Stewart is president of the Ohio Gas Association, a trade group.

STEWART: Yes, there are some emissions from operating a compressor station. They pale in comparison to the emissions of a whole lot of other things that you are exposed to on a daily or weekly basis.

RICHARDS: Stewart says people have less to fear from compressor stations than they do from traffic exhaust and gas station fumes. But Barry Booth - the man who lives near a compressor station in Carroll County - says he and his wife are so afraid for their health, after decades in this region, they’re planning to move. A neighboring family settled a lawsuit with a company over a different compressor station. Now Booth, a former local union leader, is back to battling companies in retirement. At public meetings, he’s urged people to fight new compressor stations.

BARRY BOOTH: That’s what pisses me off. I would not be doing any of this if the company would be doing what they’re supposed to be doing to the environment and everything, I would be out smelling the roses! I would be getting my paycheck from the gas and oil industry and everything!

RICHARDS: The country wants the homegrown energy and jobs from oil and gas development. But Trevor Penning, the U. Penn public health researcher, says it comes with a cost.

RICHARDS: Penning says there’s a huge need for more information about compressor stations, to clarify what the risks actually are. I’m Joanna Richards.


See the story on the website of the Allegheny Front

Project overview and map of the NEXUS Gas Transmission system