Woodwell - A World to Live In 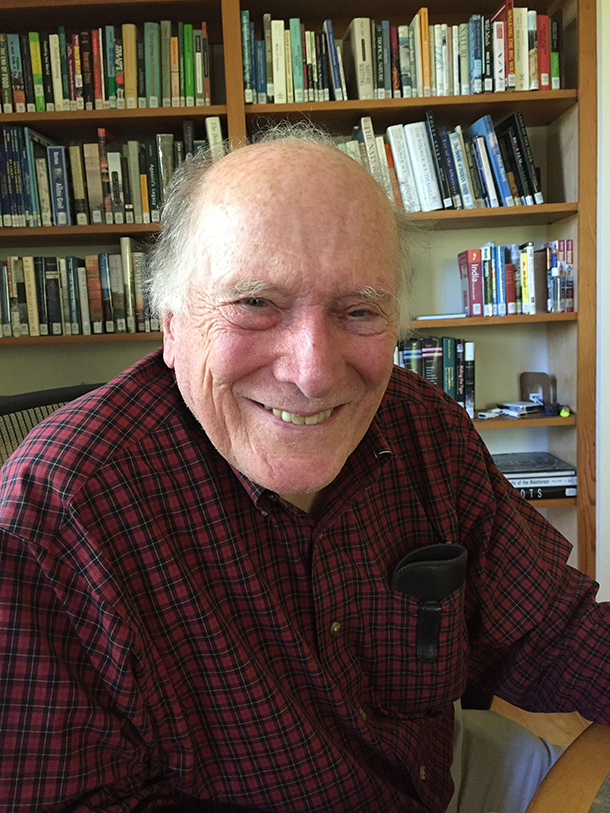 Ecologist George Woodwell has decades of research and environmental action under his belt, from documenting the dangers of DDT and climate change to founding the Woods Hole Research Center helping start other key organizations including the Environmental Defense Fund, the Natural Resources Defense Council and the World Resources Institute. His new book, “A World To Live In,” offers a reflection on the dangers of exceeding the planet’s biophysical limits. Speaking with Living on Earth Host Steve Curwood he shared some lessons he has learned about nature and environmental policy.

CURWOOD: It’s Living on Earth. I’m Steve Curwood. Few scientists have as stellar record in environmental science or policy as George M. Woodwell. When he won the $200,000 Volvo Environmental prize in 2001, the citation mentioned that in the1960’s Dr. Woodwell was among the first to investigate the health effects of radioactivity, followed by groundbreaking research that ultimately led to America's ban on DDT. This unassuming biologist was part of a team who documented climate change for President Jimmy Carter in the 1970’s. 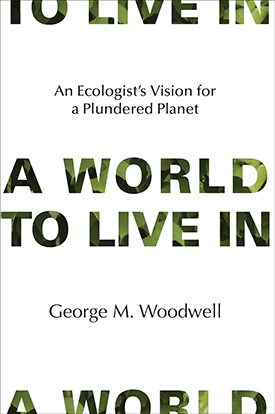 A World to Live In makes a case for how the health of the biosphere is closely linked with humanity’s future. (Photo: MIT Press)

Dr. Woodwell helped found the Environmental Defense Fund, the Natural Resources Defense Council, and the World Resources Institute. He’s also the Founder, President, and Director Emeritus of the Woods Hole Research Center, which documents how forests affect global climate and delivered seminal work that led to the UN Framework Convention on Climate Change. George Woodwell’s latest book is called “A World To Live In”. When I visited him in Woods Hole, Massachusetts, he told me that’s an increasing challenge.

WOODWELL: Well, the world is literally falling apart. We have reached a point where the opportunities for experimentation with politics and with economics, the two big systems that we admire and use and have developed to a high degree are limited -- they are limited by the biophysical limits of the earth and that topic -- the biophysics of the earth is a topic that I have pursued for my whole career and it’s perfectly conspicuous where those limits are becoming important.

CURWOOD: Reflecting on his career, George Woodwell told me about some of his earliest research into the pesticide DDT.

WOODWELL: DDT is a persistent pesticide. It was hailed as the ultimate pesticide in the postwar years when it was first released for general use. We showed in Long Island that the food web there was contaminated from the water of the marshes right on through the life of the marshes, clams, birds, and every trophic level existing at that time in the middle 1960s, had a burden of DDT residues coming from the aerial spraying of salt marshes to control the salt marsh mosquitoes within a factor of 10 of the acute lethal level for that organism. That sounds as though it's safe enough but the concentration up that food web was enormous. The concentration factors ran up to a hundred thousand fold. As a result of that we did get a court order which in the end resulted in the abandonment of DDT for use in spraying the salt marshes, and ultimately it led to the development of Environmental Defense Fund and the abandonment of DDT for general use in United States which was a wise thing.

CURWOOD: Your book paints corporations and industry interests as bearing the brunt of blame for environmental havoc through the decades. What kinds of events have shaped this perspective? 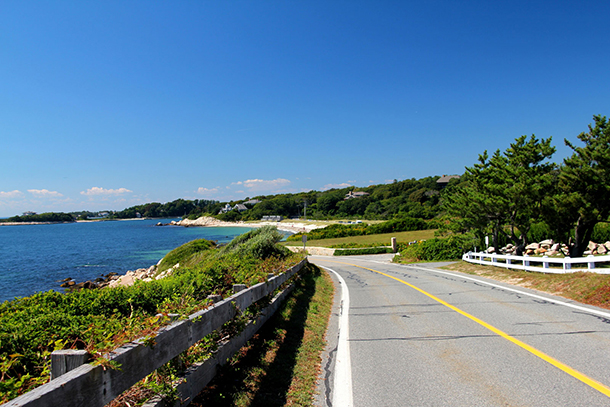 The natural landscape of Woods Hole, Massachusetts, a neighborhood in the town of Falmouth where Woodwell founded the Woods Hole Research Center in 1985. (Photo: Bill Llott, Flickr CC BY-NC-ND 2.0)

WOODWELL: Well, industries feel as though, in fact say commonly, that their purpose is financial profit at whatever cost. and they've made the assumption that cost can legitimately be pushed into the public realm. I look at this these days in a world of 7 billion people, pushing all the biophysical limits of the earth, and say, “Well, let's look at industries and ask just what their purpose is.” There is no industry that doesn't claim that it's doing something that's useful to the public in general, that they are selling a useful good of some sort, and in the process they're making a profit, but the profits get put first. Fiduciary responsibilities get talked about as being preeminent. Well, that’s ridiculous. It's absolutely not possible to have a tight world of seven billion or more people who are growing into demands, further demands, on resources all the time by developing technologies that make it possible to exploit bigger pieces of the resources available, all of those competing with one another, and turn these industries loose to do that.

CURWOOD: So, you discuss in your book what the various presidencies throughout the years have meant for the climate. So which presidents have been the best in your view? Which have been the worst when it comes to climate change policy?

WOODWELL: Oh, my. (CHUCKLES) Well, Clinton had the greatest opportunities. Actually, Carter was the very best. He understood the problem. He did things about it. He put solar panels on the roof of White House, and he developed the Solar Energy Research Institute, and he was very astute and intellectually engaged. And if he had continued, if he had not been displaced by a conservative president, Mr. Reagan, who abhored anything to do with science and with the climatic disruption, we would have been 30 years ahead of where we are now. 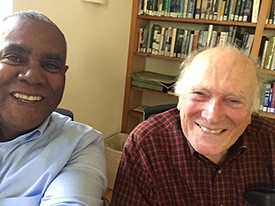 CURWOOD: And in your view the worst president in terms of climate? Perhaps you’re suggesting President Reagan, then.

WOODWELL: (CHUCKLES.) Well, the transition that Reagan made, of course, was important, but the presidents who followed him had to go out of their way to do anything really constructive. And, when Al Gore was asked to take a vigorous stand on the climate issue while he was in office, he said, “Hmmm, you want me to commit political suicide?” Things had degenerated to that point.

CURWOOD: So, let's talk about today. What do you think a Trump presidency would mean for the climate?

WOODWELL: That's a fairly simple question. I don't think Mr. Trump has the slightest idea as to how environment limits economic and political aspirations or human aspirations, and I just don't really care to speculate as to just how bad he would be.

CURWOOD: And, in your view, what would happen if Hillary Clinton makes it to the White House?

WOODWELL: Hillary is very well-informed on virtually every topic. My guess is that Hilary will rise to the challenge. She'll be under enormous pressure from elements of the scientific community that are well-seated in the conservation law groups. The scientific community should be up in arms against the present attitude, that we can double the warming of the earth that we've experienced so far and do it safely by going to two degrees change instead of one degree change in the mean temperature of the earth as a whole.

CURWOOD: On page 100 of your book, George, you say that no threat has been great enough for the nations of the world to come together on climate change. How does the Paris climate agreement measure up to that challenge, in your opinion? 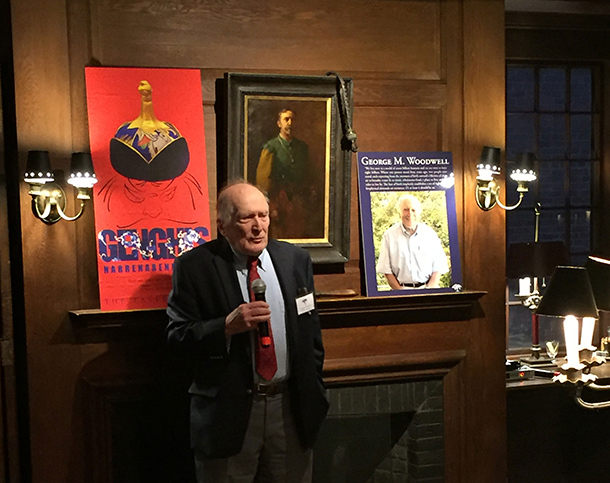 Woodwell speaking at the Tavern Club in Boston at an event honoring the release of his book. (Photo: Steve Curwood)

WOODWELL: Well, I think the Paris climate agreement is a political and economic compromise. I think the scientific community should not have accepted that and should be up in arms at the moment, saying, “It cannot work. It will not work. It cannot work, and it cannot be allowed.” The only course at the moment is to make the transition from fossil fuels to renewable energy sources, a perfectly attractive and possible and financially attractive, lucrative transition. It's not a dream, but it is a dream world. It’s a world that everyone would like to live in, and it's a clean world in which human rights are protected, the common property resources of air, water, and land are cherished and defended, and industries have a purpose, a primary purpose, which is the quality of the public realm.

CURWOOD: George Woodwell, of all the things you've worked on over the past years, what do you feel was the most important? Where do you feel you really made the biggest difference?

WOODWELL: Well, I'm not sure I've made any difference, but I've been very fortunate to work on a series of topics which have turned out to be great issues of environment. So, to the extent that the public realizes that they are great issues and that correcting them, turning them to human advantage requires fundamental changes in how we manage the world, and the responsibility for that is a core purpose of Government. Governments forget. In their enthusiasm for developing economic goods they forget that they have a fundamental responsibility to protect ecological integrity, and to the extent that the public realizes that I think we've made a contribution. I'm not sure that the intensity with which the public can realize that is going to be great enough to correct the trends at the moment, which any ecologist sees as thoroughly threatening.

CURWOOD: George Woodwell’s new book is called “A World To Live In.” He’s the Director Emeritus of the Woods Hole Research Center. Thank you so much for taking the time with us today, Dr. Woodwell.

A World To Live In