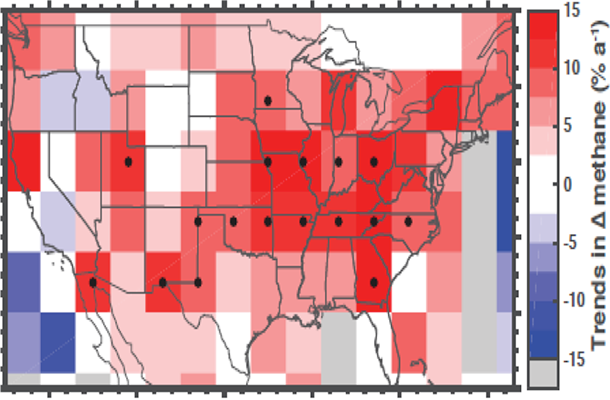 Measuring methane emissions is tough, as the gas escapes from wetlands and landfills as well as from oil and gas drilling and pipelines. Now, a team of scientists using both satellite data and ground observations has found a better way to calculate the release of this powerful global warming gas. Daniel Jacob, Harvard professor of Atmospheric Chemistry and Environmental Engineering, tells host Steve Curwood their study suggests much more methane is escaping than previously estimated, and the US could be responsible for up to 60 percent of the extra.

When the global warming gas methane is first emitted it’s roughly 90 times as powerful as carbon dioxide, and there’s more than twice as much of it in the atmosphere now than there was before the start of the industrial revolution. There are many sources – wetlands, agricuture, landfills, and of course oil and gas production and a massive natural gas leak near Los Angeles drew attention to the environmental impact of methane.

A study from Harvard University published in the Proceedings of the National Academy of Sciences documents a spike in global methane emissions to levels far higher than previous federal estimates. The study claims the United States may be to blame for up to 60% of the global growth in human-caused methane emissions. For an explanation we turn to lead author Daniel Jacob, professor of atmospheric chemistry and environmental engineering at Harvard University.

JACOB: So, we tried to look from the satellite data at fingerprints of where methane could be increasing, and we found the large increase over the past decade of emissions of methane in the US, of about 30 percent — which, if you consider what it would contribute to the global increase of methane, would amount to 30 to 60 percent of the global rise in methane.

CURWOOD: You say "fingerprint of methane". What are you talking about?

JACOB: We’re trying to figure out where methane is being emitted, and where the increase in methane is coming from. And so the way you figure this out is by looking at the areas around the Earth where methane is increasing faster than average. And this is what led us to the US.

CURWOOD: So, methane molecules don't have any particular identity. They're all carbon atoms surrounded by four hydrogens. There's not a particular kind of methane that you're able to identify with a fingerprint methane.

JACOB: You're absolutely right. Methane is methane. Now, if you look at methane isotopes you could try to figure out where methane is coming from, but we cannot observe those from satellite.

CURWOOD: Now, some people listening to us would say: ‘But professor, the spike you've identified seems to have started from the time of shale oil and natural gas, the boom beginning in the US. Come on, there's got to be a connection to this.’ How do you respond?

JACOB: I respond that there might be, but our data doesn't provide a smoking gun for figuring out where the methane is coming from. It's just showing that there's been a large increase in methane emissions in the United States. The tempting hypothesis is indeed that it's due to oil and gas, but more work is needed to figure out where that source might be and also what processes are involved. I mean, oil and gas is a very complicated source. You have emissions associated with exploration, with production, with processing, transmission, compression, distribution. And at all these steps in the supply chain you could have emissions, so it's going be difficult to tease out if it is coming from oil and gas, which we really cannot tell.

CURWOOD: Now, how does this compare to other measurements that have been made?

JACOB: We examine a bunch of studies that have been done over the past decade of looking at methane in the atmosphere over the United States, and comparing to emission inventories. And what these studies repeatedly show is that our current national emission inventory for methane that’s produced by the Environmental Protection Agency is too low.

CURWOOD: And of course, one major source of this discrepancy might well be that as things warm, wetlands are releasing more and more methane and the government doesn't go out and ask a wetland how much methane it’s releasing.

JACOB: No, so the government is not looking at emissions from wetlands right now, except manmade wetlands such as rice patties. But we can use satellite observations, again, to see how much methane is coming out of wetlands and the trends associated with that. I think you bring up a good point that the atmosphere doesn't lie. When we see methane in the atmosphere, we know it came out of something. Whereas the emission inventory from EPA doesn't really know about methane in the atmosphere, it just knows about the different activities that are emitting methane. So there really needs to be a partnership between EPA and the atmospheric scientists to resolve the difference that we're presently seeing.

CURWOOD: Tell me, what's the difference between your data and the current federal data? 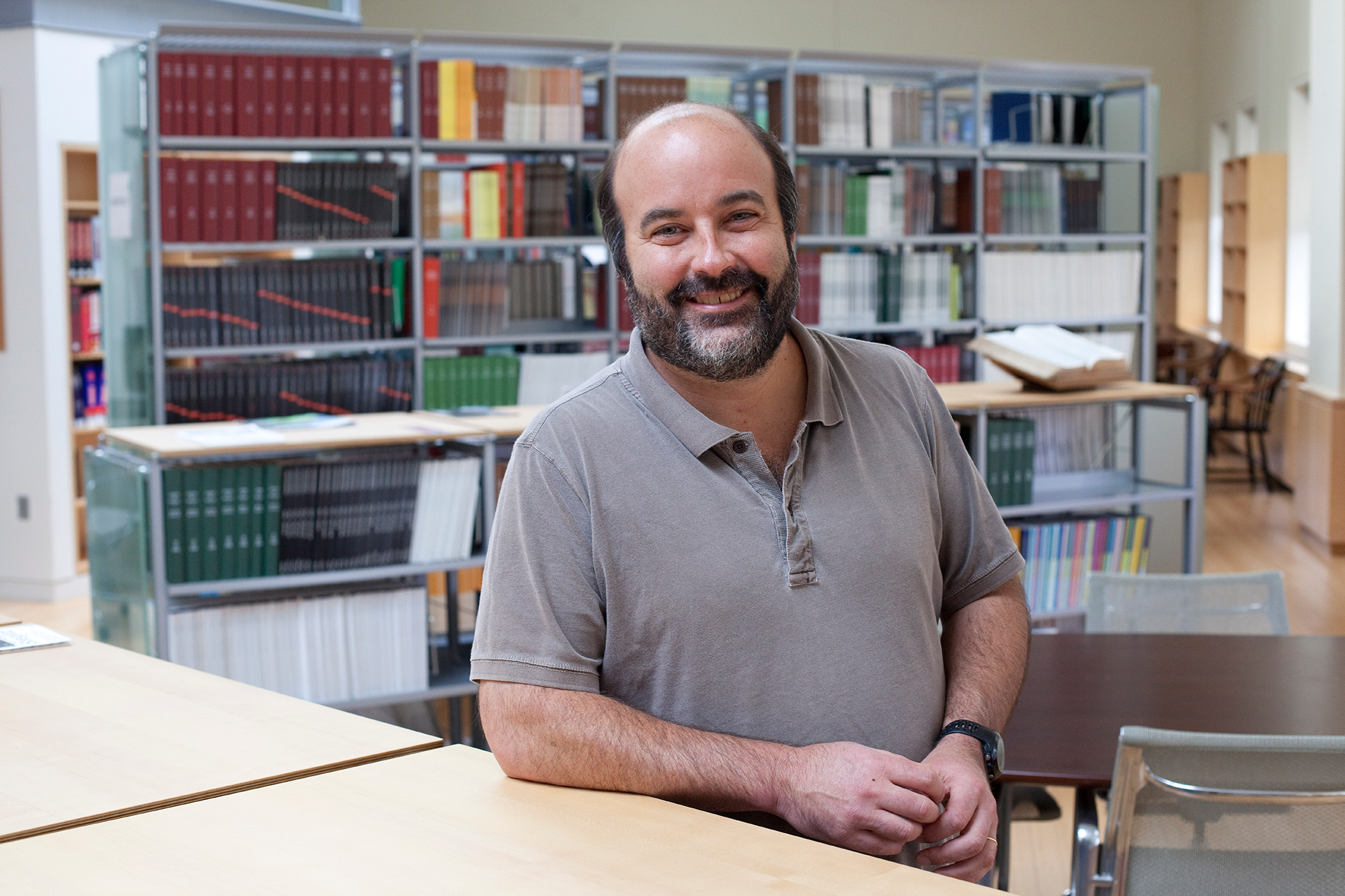 JACOB: The EPA gathers information on all of the sources that it thinks are emitting methane, and it's really pretty good at this. So, it knows where all the landfills are, where all the major livestock operations are, the different components of oil and gas supply system, the leakage from coal mines and so on. The inventory that comes out of this is what we call a bottom-up inventory, in that it looks at the individual processes that are emitting methane and tries to estimate how much methane is associated with these different processes with the individual sources. What we can do from the atmosphere side is what we call top-down constraints, in that the atmosphere tells us how much methane there is. And it gives us a rough idea of where it's coming from, but it cannot as easily pinpoint the methane to individual sources.

CURWOOD: And to what extent could satellite monitoring be a way to look at what other countries around the world are doing in terms of methane?

JACOB: I think it's a silver bullet. We've been hampered until now because the satellite observations that we have are fairly sparse. In other words, from satellite we can see globally where methane is coming from, but the picture is a little blurry. But later this year in October, the Dutch are going to be launching a new satellite instrument. And that's going to provide us with a much finer picture of methane emissions, and so we'll be able to observe methane every day around the world with a resolution of about five miles. So this is going to revolutionize our ability to observe methane from space.

JACOB: Yeah, this appears to be an issue for the past decade or so that the emissions are being underestimated, and that doesn't come just from us. There are numerous studies that are showing this, so the view is that the methane emissions of the United States are underestimated by 30 to 50 percent. And I would say that's pretty much a consensus view from atmospheric scientists that have been looking at methane emissions from the US.

CURWOOD: Daniel Jacob is a Professor of Atmospheric Chemistry and Environmental Engineering at Harvard University. Professor, thanks so much for taking the time with us today.

JACOB: It's been a pleasure.


Study: A large increase in US methane emissions over the past decade inferred from satellite data and surface observations