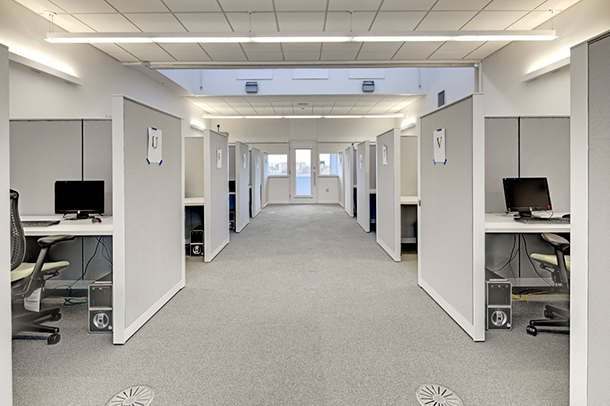 Twenty-four professionals participated in the six-day COGfx Study. Each conducted their normal work activities within a laboratory-setting that simulated conditions found in conventional and green buildings, as well as green buildings with enhanced ventilation. (Photo: United Technologies)

Architects have long focused on ways to seal buildings up and make them more energy efficient, but new research demonstrates that good ventilation can be important for our cognitive abilities. Steve Curwood speaks with Harvard School of Public Health professor Joe Allen about the new study that documents the details.

CURWOOD: Think air quality and you’re likely to consider outdoor air, full of diesel fumes and smoke and dust. But most of us spend 90 percent of our time inside. Now ground-breaking research by a team from Harvard, Syracuse University and SUNY Upstate finds that dramatically improving indoor air quality can more than double the reasoning scores of workers. Chemicals found in paints, furniture and flooring -- so-called volatile organic compounds, or VOC’s, are the main problems. And common office concentrations of carbon dioxide also modestly reduce cognitive functioning. The lead author of the study, published in Environmental Health Perspectives is Joe Allen of Harvard’s Center for Global Health and the Environment. Welcome to Living on Earth, Professor Allen!

ALLEN: It's a pleasure to be here. Thanks.

CURWOOD: Your study looks at the impact of indoor air quality on cognitive functioning, so tell me about the study. How did you do this?

ALLEN: We set up in the Syracuse Center of Excellence. They have a simulated office environment, and we enrolled what we called knowledge workers, people who work in office environments. We enrolled them to come to the Syracuse Center of Excellence and do their normal work routine in this office. From the floor below, we were able to manipulate the indoor environmental conditions in their workspace unbeknownst to them. At the end of each day, we administered a cognitive performance test, and the analysts are also blinded to the conditions that were testing that day, so that way it's a double-blinded study, it's a controlled environment, and we were able to manipulate one variable at a time to tease out the effect of that variable on the cognitive performance scores of people in that space.

CURWOOD: Now, how did you measure the cognitive impacts?

ALLEN: So we measured cognitive performance with a great tool called the simulated management strategy tool, and it's a neat tool because it tests real world decision-making performance. I think it's best if I give you an example. So, in one of the scenarios, the participants are asked to play a game, and they are essentially the mayor of a city, and in that role they are prompted with things that happen throughout the day and they have to respond to these prompts throughout the day, and they have a wide axis to a wide range of information, and we watch how they plan, strategize and what decisions they ultimately make in response to the information coming at them. 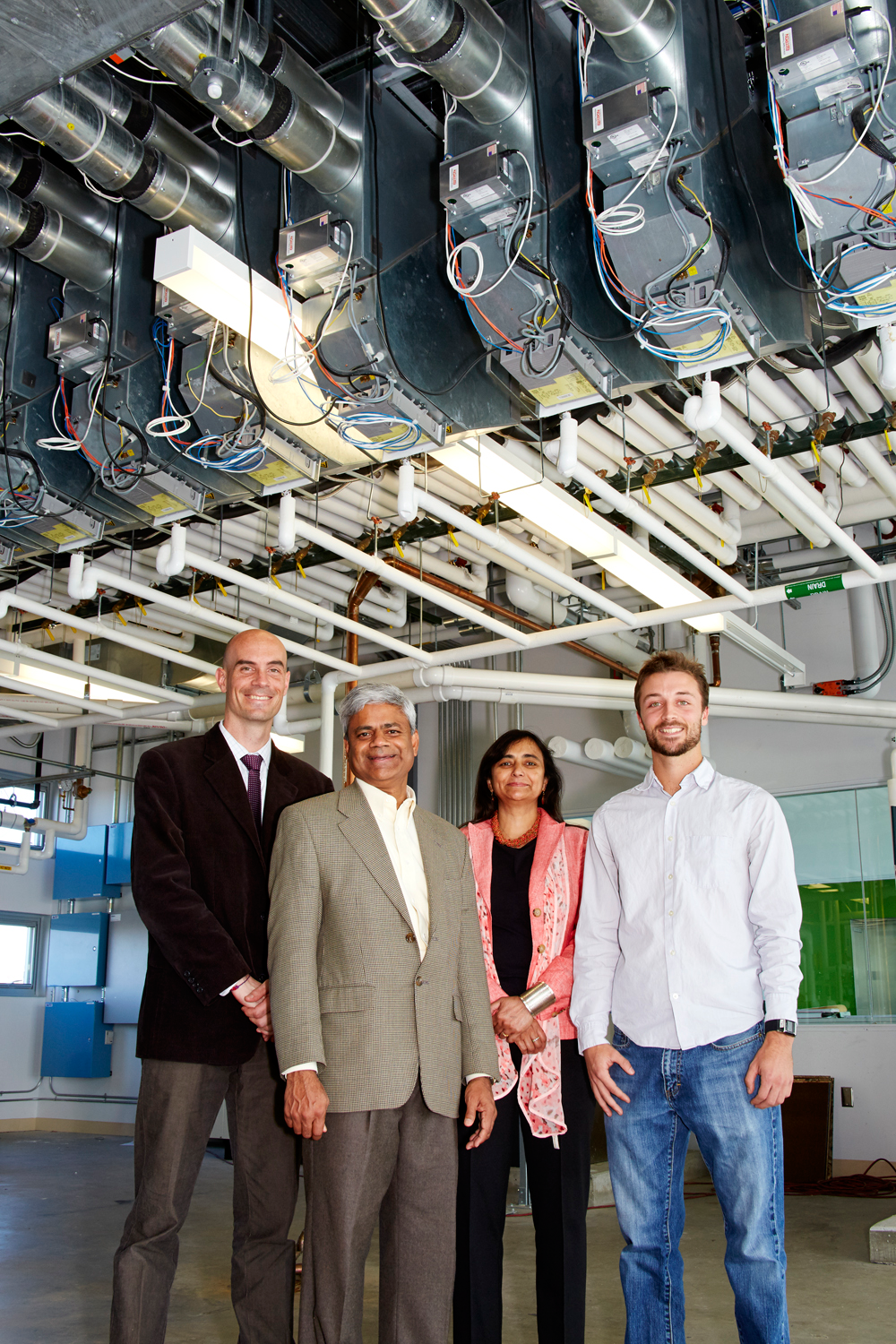 It's really similar to how we all operate every day. You're sitting at your desk, you have access to unlimited information with the Internet, your phone rings, you have text messages coming in, you're answering e-mails, the boss comes in, a crisis happens, and we want to simulate this with this tool to test how people respond under this real-world scenario of dealing with information, figuring out how to use information, are they optimized, how they do in a crisis and importantly, how do you recover after a crisis, are you done for the day or do you go back to your nice strategic planning in taking actions based on the prompts that are coming in.

CURWOOD: So what did you find? How did people perform these cognitive tests based on their exposure to changes in air quality?

ALLEN: Yeah, we found some quite striking results. We found a doubling of cognitive performance scores for people who spent time in the optimized green building environment compared to those same people when they were in the conventional office building, an indoor environment designed to simulate the conventional office building. And three domains, three cognitive functioning domains in particular had the strongest scores. These were crisis response, strategy, and information usage. And these three cognitive function domains are most closely tied to productivity.

CURWOOD: Those numbers are huge. That's a big disparity. How surprised were you by those findings?

ALLEN: To be quite honest, we were shocked. We think this is a big deal, that the findings are strong, the magnitude of the effect is quite large and the really nice thing about the studies is that we weren't testing anything exotic. We didn't introduce chemicals into the environment that you don't typically encounter. We didn't introduce ventilation rates that are impossible to obtain. The idea was to simulate office environments that can easily be obtained. So these are chemicals that we are commonly exposed to, these are outdoor ventilation rates we can obtain in most buildings. So this is what's shocking is that you see this big effect - the magnitude is big, and the effort it takes to reach that wasn't that much.

CURWOOD: Joe, how does all this indoor air pollution affect us physiologically? How do you get from the chemical to cognitive impairment?

ALLEN: Well, this is a great question and it's currently unknown, so there's no answer right now, but we hope and we know - there are people working on this and we're starting to work on it too - is the next question is why is this happening, or how is it happening...so physiologically, mechanistically what's happening that's causing this decrement or in some cases improvement in cognitive performance functioning. So we think that the next six to 12 months we'll start seeing a lot of researchers attacking that question.

CURWOOD: So let's be specific about these chemicals. What's the impact of the Volatile Organic Compounds, the VOCs? 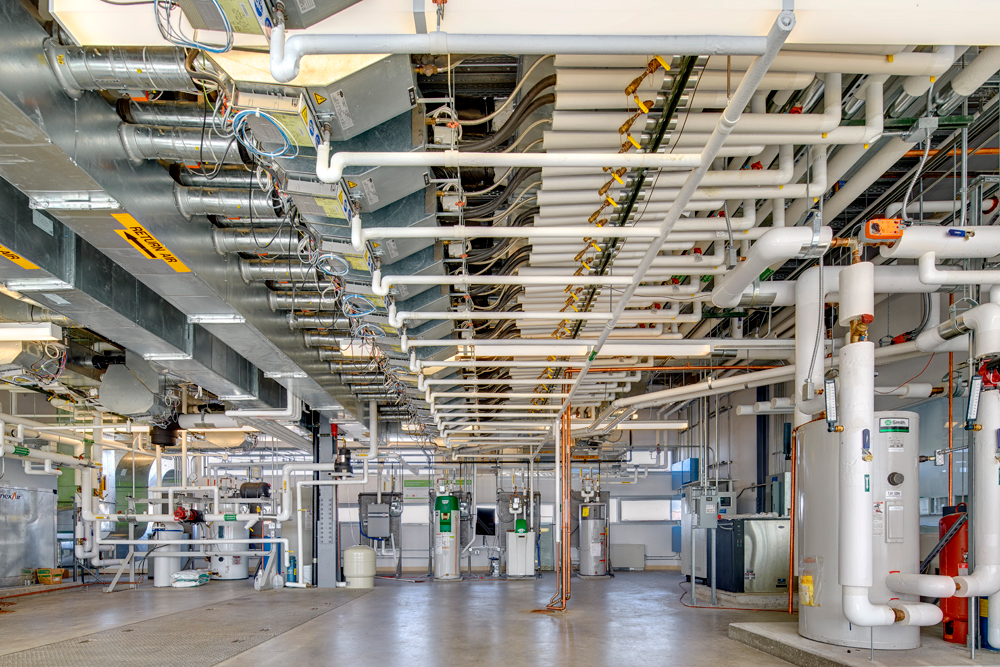 The study was designed to determine the independent and combined effect of volatile organic compounds, ventilation and CO2 on workers’ cognitive function. These factors were controlled by a machine room located directly below the workspace. (Photo: United Technologies)

ALLEN: So VOCs...I mean, we're exposed to VOCs every day in just about every environment we're in, and we know they cause things like eye irritation or upper respiratory irritation, some of them are carcinogens, so we know these compounds can be irritants, and now we're learning that they can also impact cognitive function.

CURWOOD: Now, what about carbon dioxide?

CURWOOD: So, a huge impact.

ALLEN: Yeah, very big. I mean this is new for our field. Carbon dioxide, we measure it all the time when we're doing studies of buildings and health because it's a good indicator of how well the space is ventilated. But now we’re starting to see that maybe carbon dioxide isn't just this useful tool as a proxy for ventilation and other things that are building up in our environment. It might actually be a direct pollutant, a primary pollutant.

CURWOOD: So you say that there's this decrease in cognitive functioning when you have poor air quality or even conventional office air quality compared to greener air quality. How do you translate that into dollars and cents, let's say, for a company looking at its workers?

ALLEN: Yeah, I'll tell you about our next paper that we publish that should be out in the next month or two because we thought this was a really important question to ask is how can we take the data we have now on cognitive performance and turn it into dollars because we know that research informs practice, and what a lot of these practitioners want to hear is how is it going to impact my bottom line. So we looked at the energy penalty, or the energy cost for increasing outer air ventilation to the levels we did in the study where we found a benefit to cognitive performance and we find that it's on the order of $30 per person per year to double your outdoor air ventilation rate. Then we used the same information from our study and looked at the cognitive performance improvements normalized to what we find in the general population and we estimate that the benefits to productivity are on the order of $6,000 per person per year.

CURWOOD: So what do you hope comes out of this study?

ALLEN: We designed this study specifically to look at what building factors could be improved that would lead to benefits to cognitive performance of people in that space, and there's a positive story here is that there are things we can do right now in most spaces that will reduce the chemical concentration that we're exposed to and increase the amount of air coming in, and we think this will lead to better cognitive performance based on the results of the study.

CURWOOD: You know, when you do a home energy audit, they come and they do this pressure test to see how much leakage you have, and the less leakage you have the more efficient the home is. To what extent is this a zero sum game if you improve indoor air quality, you have less energy efficiency?

ALLEN: Yeah, Steve, I think it's a false choice we've been given over the past 30 years where there has been a trade-off traditionally between energy efficiency and human health, and that can't be the way we move forward. And we know that you can make decisions now in how buildings are designed and how your ventilation system is performing and the choices in the products you make can be used to optimize indoor environmental quality while optimizing energy performance and cost.

CURWOOD: Joe Allen is an Assistant Professor of Exposure Assessment Science at the Harvard T.H. Chan school of Public Health. Thank you so much.

ALLEN: My pleasure. Thank you.


Study: The Impact of Green Buildings on Cognitive Function

More about the study and its implications from United Technologies