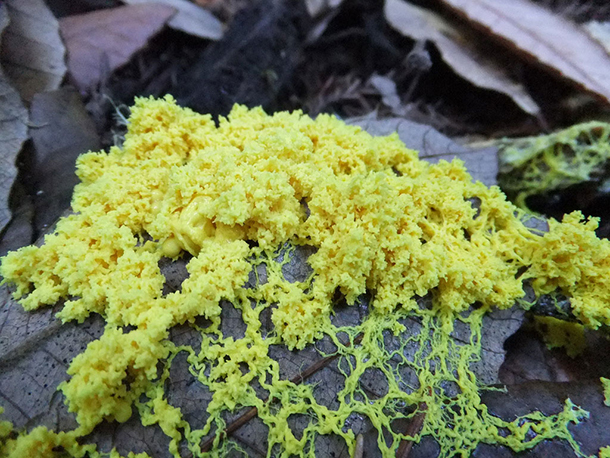 A goopy single-celled organism may seem like an unlikely choice for research on cognition. But, as Living on Earth’s Charlotte Rutty reports, the yellow slime mold has a lot to teach us about how creatures make decisions when they apparently don’t have brains.

CURWOOD: It’s Living on Earth, I’m Steve Curwood. In a minute, how liquefied natural gas and salt have raised concerns in New York State’s wine country, but first this note on emerging science from Charlotte Rutty.

RUTTY: Just a tiny fraction of life on earth boasts a nervous system, but the brainless majority seems to do just fine. Take, for example, Physarum polycephalum, or the many-headed slime. This bright yellow slime mold lives on moist forest floors, where it stretches out long tendrils to explore the world around it. It consists of just one goopy cell that can grow to up to several meters in size.

Despite its brainlessness, you could almost call this creature “smart.” Researchers use it as a model organism to study how species like it – species without nervous systems – make decisions. In past studies, scientists have found that the slime mold can solve mazes, anticipate patterns, and even remember where it’s been.

It’s not exactly thinking, though. When P. polycephalum is remembering, it’s actually just detecting the sticky trail of mucus that it leaves behind wherever it goes, which tells the slime mold that it’s been here before. Since it doesn’t need to explore the same place twice, it moves on.

It’s processes like this that the slime mold is helping science understand – behaviors that look a little like thinking, even though they happen without a brain. Most recently, a team of biologists at the New Jersey Institute of Technology put this organism through a classic cognition test, The Two-armed Bandit. They gave the slime mold a choice: two directions to explore, each one rewarding it with food. At first, the slime mold tried both directions equally. But after three to four hours, it figured out that there was more food in one direction than in the other, and after that it headed only down the one with the better payoff. Of the individual slime molds they tested, 80 to 90 percent moved in the right direction – and that’s a result similar to those achieved by mammals and birds on the same test.

So this humble, yellow slime has a lot to teach us about the mechanisms of cognition. You don’t have to be brainy to make decisions.

The NJIT study, entitled “Decision-making without a brain: how an amoeboid organism solves the two-armed bandit”